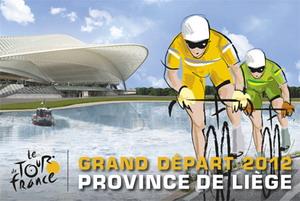 Organisers of the Tour de France ASO have unveiled details of the first couple of days’ racing in the 99th edition of the race, which takes place in 2012.

Last month, ASO confirmed that Liège would host the Grand Départ, marking the 19th time that the race has begun outside France, and the Belgian city will also be the first foreign venue to host the start of the race twice.

The last time the race visited the city, which is the capital of Wallonia, the French-speaking part of Belgium, was in 2004 when Fabian Cancellara won a 6.1km Prologue to take the yellow jersey for the first time of his career.

The Swiss rider, who is expected to join the Luxembourg Pro Cycling Project from Team Saxo Bank, has made a habit of taking the opening maillot jaune of the Tour whenever it starts with the short time trial format – he’s done so four times since that 2004 win – and will have no doubt been delighted by the news that the 2012 Prologue will follow the same route.

The 2012 race gets under way a week earlier than the race would usually start, on Saturday 30 June, as a result of the London Olympic Games starting at the end of July.

After the opening day’s Prologue, the first road stage will cover 180km to Seraing, on what should be a flat, sprinter-friendly route.

Stage 2 on Monday 2 July will then take the peloton from the Belgian town on Vise and head off towards a destination that is as yet unknown and will not be officially revealed until the full route of the race is presented next autumn.