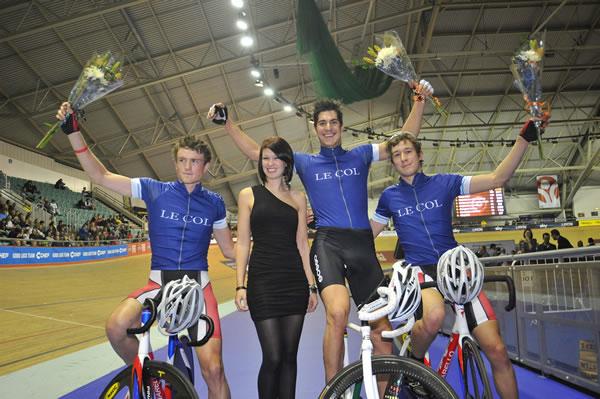 Maxgear leads Championship by two points from Le Col, with Team Sky only one point further back
by Simon_MacMichael

Le Col took the honours on the night in the penultimate round of the 2010/11 Revolution Championship at the Manchester Velodrome on Saturday evening, but it’s Maxgear who go into the final round of the series in January as the team at the top of the rankings.

Franco Marvulli, Le Col’s captain, led from the front, partnering Andy Fenn to beat the Manchester City Council pairing of Claudio Imhof and Sam Harrison to put in the fastest time, 58.485, in the second round of the 1km Madison Time Trial after Imhof and Harrison had set the pace in the first round.

Then, in a thrilling Team Points race, Marvulli took two individual sprints to help overhaul Team Sky, whose trio of Russ Downing, Peter Kennaugh and Tom Murray had been leading with 20 laps to go, Le Col eventually taking the victory by four points.

The inclusion of an Australian Pursuit on the programme had many in the crowd scratching their heads, although Hugh Porter, on PA duties for the evening, soon enlightened them – basically, riders start the race at different positions around the track and are eliminated if they are caught by a rider behind them – and an exciting race saw Russell Downing pipped by Leif Lampater.

The 10km scratch race saw Le Col notch up another win, helping bring them to within two points of Maxgear by the end of the evening, with Team Sky a further point behind in third, This time, victory came courtesy of Jon Mould, after a race in which Dean Downing had made the early pace before being attacked by Alex Dowsett, Pete Kennaugh and Sam Harrison.

During the evening, there was also a full programme of racing in the DHL Future Stars competition. In the Girls’ events, Amy Roberts took the Points Race, while Emily Kay, who had narrowly missed out in that race, more than made up for it by winning the 6 Lap Dash and Scratch race and goes into January’s finale at the top of the standings.

In the Boys’ events, Matt Rotherham and Sam Lowe, who top the standings, fought a battle throughout the evening, Lowe taking the Points Race but Rotherham clinching victory in the Scratch Race and 6 Lap Dash, putting him into the series lead.

The final round of this year’s Revolution Championship takes place on Saturday 15th January and is a double-header with the National Madison Championships, and tickets for both can be booked online here.