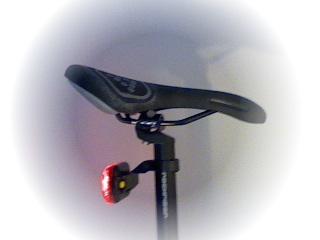 GPS tracking for your bike

Tracking devices fitted to high-value cars have been around for a number or years but now it’s possible to have the devices attached to your bike, cunningly hidden within an ordinary-looking back light.

Spylamp is a covert tracking device hidden inside a rear light that visually and functionally appears similar to any other.

To activate the tracker the user simply holds down the on/off button for three seconds. Any subsequent movement of the bike will trip a sensor and trigger an instant SMS message as well as starting the tracking function allowing the owner to see where their machine is located.

The vibration-activated tracker uploads its coordinates to a free online service, with owners able to log on to the WhereIsIt page to monitor the device’s whereabouts.
The Spylamp comes with a hardened steel wire cable that loops around the seatpost and the makers say it is not possible for a casual thief to unscrew the clamp or to break the light away from its mounting.

If the bike is taken to a place where the tracker cannot lock on to the GPS network it goes into a mobile phone GSM positioning fall back mode which, although only accurate to within 200m, will at least give an indication of where a bike is located.

When moved back to a position where the tracker can provide a GPS location, accurate tracking can resume, assuming the subterfuge has not been discovered and the tracker separated from the bike, that is.

The light itself can also act as a trigger. If a thief uses the bike, the tracker will check if it is stolen by sending its coordinates to your phone.

The light uses a rechargeable lithium battery and comes with a charging cord. The battery can go for a year between charges by entering a sleep mode.

All configuration is done by sending the unit SMS text messages and once installed, it should not need require further configuration.

The device requires a SIM card and the makers recommend a pay-as-you-go card which can be topped up as and when required.