"Skinny is the new fat" and "Efficiency is harmony", say Cannondale of their 695g frame
by dave atkinson

Our man Mat is out in Italy right now for the launch of Cannondale new SuperSix Evo ahead of the Giro on Staurday. And he's sent us back some early shots of the bike and taken it for a test ride - the first of many over the coming days. Probably most eye-catching of the lot is the Ultimate build pictured below that weighs in at – wait for it – 4.95kg.

The Supersix has been around since 2006 but this new incarnation is the culmination of a two-and-a-half year development project. You won't be surprised to know that Cannondale have been going after the usual goals: strength, stiffness, weight, compliance and reduction in drag. In the rarefied world of super-light framesets it's always good to be the lightest, so no surprise that Cannondale have aimed just below the Cervelo R5CA; 1g below in fact at 695g. They did have a 630g frame in development but apparently it was too expensive to produce...

Interestingly, Cannondale have moved back from a 1.5in lower crown race to a 1.25in one, in order to reduce the frontal area of the bike and reduce drag. Aero performance is on the list but weight is the top priority here, so the tubes are mostly round section which saves weight over more convoluted designs. You won't find any curves along the length of the tubes either; they're all straight. 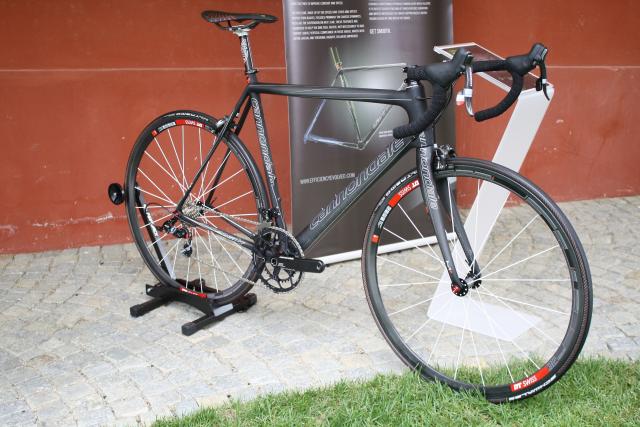 The frame is made in three sections. The head tube, top tube and down tube are fabricated together as a monocoque, as are the seat tube and bottom bracket. These slots together with the chainstay section which, unusually, is created as a monocoque with the seatstays.

There's no metal insert for the dropouts so the stays are hollow right to the clamping surfaces which, Cannondale reckon, saves 34g. There's a double thickness of carbon where the down tube plugs into the bottom bracket which helps to stabilise the frame. The top tube starts out wide up by the head tube, slims in the middle section, then widens at seat tube junction so there's better knee clearance in the middle of the tube and good torsional stiffness too.

The down tube is almost round all the way - for excellent torsional strength, good lateral strength and good aerodynamics (compared to rectangular tubes), according to Cannondale's reckoning. Cannondale currently have a fixation with comparing their Supersix to one with rectangular tubes, it seems: wonder which bike they mean? 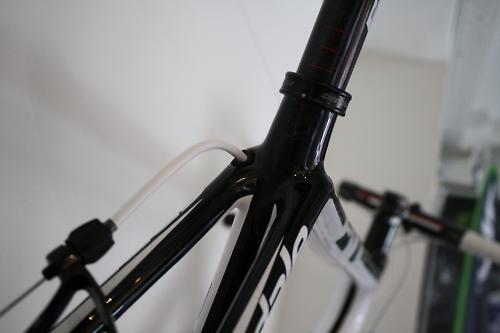 The frame is made from an underlying structure of BallisTec carbon (the stuff they use for MTBs and CX bikes). It's intermediate modulus; They could have got lighter and stiffer with high mod, but there's the risk of it snapping in a crash. Intermediate mod elongates more so it's more likely to survive a crash. Over the top of that structure they add high mod layers in certain areas. They use a very complex layup to add stiffness to the bottom bracket area with fibres looping right around the BB shell, a technique they've borrowed from helicopter rotors. 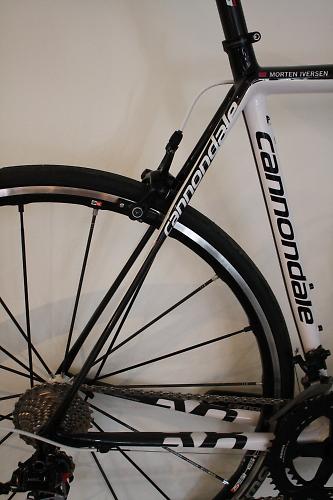 A section of the seat tube – just below the end of the seat post – is made with the carbon fibres going at 70° and 45° rather than straight up and down. This allows some fore and aft movement in the seat tube, adding a bit more vertical compliance.

The chainstays are squashed vertically to aid rear-end comfort whilst keeping everything nice and stiff. The main thing, though, is that the manufacturing process means they're 30%-40% lighter than before. One thing Cannondale talked about loads in the presentation is that this 'micro suspension' – that's the new term for vertical compliance, fact fans – isn't mainly for comfort (although that's handy): it keeps the wheel in contact with the ground better, so it's faster. It's a performance feature: a compliant bike is an efficient bike.

There will also be a Supersix EVO Team with SRAM Red shifters, mechs and brakes, and Mavic Cosmic Carbone SLR wheels. That one will weigh in at 6.4kg. Cannondale add a steel weight in the seat tube to nudge the weight over the UCI's 6.8kg minimum weight limit. A Di2 build with Mavic Kysrium SLR wheels will also be available, as will a Dura-Ace model with Ksyrium SLs.

We don't have any info on pricing yet, but it's a 2012 model so don't expect to see one down your bike shop until the end of the year. The Liquigas team have got their sticky mitts on some though, and they'll be riding them in the Giro.

Mat has been out on the new Supersix Evo on the roads of northern Italy. His version was not quite standard, fitted with a SRAM Red groupset, FSA K-light cockpit and seatpost, and Mavic R-Sys SL wheels. It weighed something like 6.2-6.3kg. 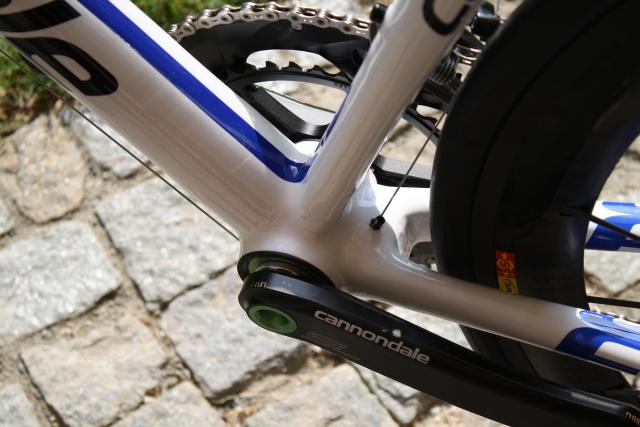 He says, "Visually it's quite different to current Supersixes. The bottom bracket area is much smaller than the huge Beat Box on 2011 models, for instance, the profile of the chainstays is much shorter (top to bottom), and the top tube slims down towards the middle. It still looks like a Cannondale, but a slimmed down model.

"In terms of the ride, it's very light and quick off the mark and it climbs really impressively. Cutting weight is all very well – it's not difficult to take material away and drop the grams. It's keeping the stiffness while dropping weight that's more tricky.

"This bike retains the stiffness of current SuperSixes. If Cannondale hadn't told me the head tube was slimmed down with a 1 1/4in lower bearing instead of 1 1/2in, I wouldn't have noticed. I couldn't discern any difference in front end stiffness. And the whole middle section of the bike stays firm when you whack all your weight through the cranks and swing the bike about.

"I managed to get in 2hrs on the SuperSix Evo on one day, and 5 1/2 hours the following day. Most of the roads around Turin were smooth but we took in some with UK-style surfaces too. No big potholes, but certainly some rough stuff.

"From that I'd say that the SuperSix Evo is perfectly capable of soaking up vibration. It felt really comfortable throughout and doesn't jump or skitter when you hit a bad patch, so you stay firmly in contact with the ground and fully in control.

"Even at the end of our big ride, I'd happily have stayed out on the bike longer if we'd had time. There were no aches or pains from being in the saddle, despite some big climbs and fast descents. This is a really high quality road bike. It will do well in full-on tests and is bound to prove extremely popular."

We now have UK prices on the various builds of the SuperSix Evo: