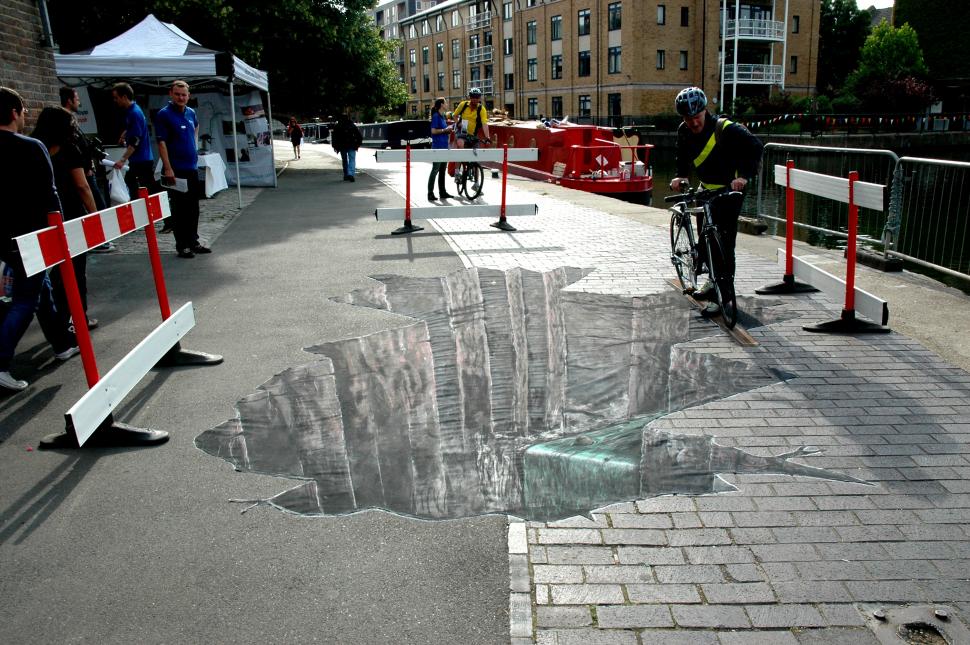 Hole in the path stops cyclists in their tracks

Look at the barges, look at the birds..aaaarrrggghhhh!!!!!!
by Tom Henry

The sedate-sounding British Waterways has used guerrilla art tactics to force cyclists using a stretch of London canal to slow down.

Riders on the towpath of the Regent’s Canal in Islington are being confronted by a canvas painting of a gaping hole in the path which, when viewed from a certain angle, looks like it will swallow up the offending cyclist.

The work is by Joe Hill and Max Lowry, street artists who specialise in three-dimensional images.

British Waterways’ towpath ranger, Joseph Young said: “The majority of cyclists and pedestrians who use the towpaths share the space amicably and recognise that the waterways offer a peaceful, scenic, and vehicle-free route through the city.

"However there are a handful of users who refuse to slow down and share the space with their fellow pedestrians and cyclists. That’s why we’ve commissioned this piece of art. We hope that it will shock them into slowing down to avoid falling into the canyon we’ve created. Once they’ve slowed down it gives us an opportunity to talk to them and explain how their speeding puts both them and other users at risk.”

The image, laid out on two canvases, has been blended in at the edges with the towpath surface to make it look more realistic.

The campaign is part of British Waterways’ ‘Two Tings’ campaign, which encourages cyclists and pedestrians to share the towpaths, and abide by a code of conduct to avoid any collisions or clashes along the canal.

Joe Young added: “As a cyclist myself I can definitely say this isn’t about trying to restrict access to the towpaths for bikes. It’s about appropriateness – the towpaths are often narrow and are full of historic furniture such as low bridges, lock landings and bollards, all of which are part of the charm of the canal, but aren’t ideal for cyclists who need to get somewhere in a hurry.

“Cycling on the towpath is a real escape from the hustle and bustle of the city, so it’s worth taking it steady and enjoying the view.”