A man in Baltimore, Maryland, is using pedal power to turn maps of the city into art, tracing pictures of his journeys round the city by using his GPS-enabled phone. Michael Wallace’s works have now been featured in newspapers, websites and other media around the world, and here he shares with road.cc how he got started, the idea of launching a website to showcase his work, and his plans for his biggest piece yet.

Wallace, aged 39, who works as a middle school science teacher, had the idea of tracing his nickname – Wally – on a GPS-tracked ride a couple of years ago. Soon, after doing likewise with friends’ names, he moved on to creating more ambitious pictures including Jellyfish Invasion, shown above, an American footballer kicking a field goal, and even an AT-AT from The Empire Strikes Back.

What began as a way of incorporating a bit of fun into his fitness regime has now evolved into a website, WallyGPX.com, that showcases those works as well as plans for future ones, which last November was featured on CoolSiteOfTheDay, and since then his works have featured in media around the world.

While Wallace himself has likened his travels around Baltimore as akin to playing with a giant Etch-A-Sketch, there’s a lot more to it than that, with a huge amount of imagination and visualisation clearly going into creating each image.

“The idea for creating GPS-based art erupted from a combination of looking for a new way to trick myself into exercising blended with a desire to express and challenge myself,” Wallace told road.cc.

While some reports wrongly state that he dreamt up the genre, Wallace himself acknowledges that he is just one of many people who have found a way of expressing themselves creatively with the help of a bike, a map, and a GPS device.

“Although I immediately learned that I had not invented any of this, I remained undeterred because I knew I had found a perfect outlet for what I was looking for,” he said.

“I frequently deflect credit for ‘inventing’ GPS artwork and give shout outs to the GPSers that came before me. I am just another person who has found a healthy and interesting way to express myself.

“Making my first ride was exhilarating, and I suppose I could metaphorically say that I’ve chasing that rush ever since,” he added, going on to explain how those initial rides ended up as the first building blocks of what would turn out to be a comprehensive website showcasing his talents.

“The early days of my GPX riding consisted of me making creations and texting them to my friends at work,” he explained.

“One of the many of benefits of working in education is that I have a healthy amount of time to myself in the summer,” adding that the father of a friend had told him, “You can’t be a derelict, so you might as well do something important with your time.”

It’s advice that Wallace has borne in mind whenever the long summer break looms.

“That mantra has in many ways inspired me to push myself to fill my vacation time with productivity, whether it be in the form of professional jobs, writing, being the commissioner of silly tournaments, and a large variety of other unique endeavors,” he said.

“The residential streets of southeast Baltimore have summer days that are significantly more clear of cars and traffic during standard working hours, and that’s the perfect set up for the physical creation of my pieces,” he continued.

“In the early days I would send what I made to my working friends and they would all freak out over how unique they were.

“It was fun, and once the summer ended, I was left with a large personal collection of WGPX creations.

“Out of encouragement from friends, I ended up printing these images onto high quality linen and plastic textured papers, framing them, and showing them in two local art shows.

“The first show was at the Creative Alliance's Patterson Theater, and the second. ‘That's Awesome’ was produced by Art Dimensions Baltimore.

“I received outstanding feedback from everyone, and in that encouragement, WallyGPX.com” – which he modestly described as his “rookie attempt” at building a website – “was born.”

“It took some time to figure out, but was fun to make. I essentially disclosed exactly what I’m up on the site.

“It too has been generating a ton of smiles. I think it is so interesting to think that it began as a word of mouth scenario, and eventually found itself gently tumbling around the world.

“The major catapult that sent it into the ether was CoolSiteOfTheDay. Since then my work has bounced its way onto a wide variety of media which is allowing and alerting others to visit WallyGPX.com.”

Besides pictures of the finished works themselves – we’ve shown some here, but there are plenty more on the website – Wallace also outlines on the website exactly how he goes about creating the pieces.

That includes the initial conception, through drawing the outline of his route onto a Google Maps printout he carries with him on his ride, which he logs using both MEGL and Google My Tracks. The size of that printout varies according to the scale of the piece he is contemplating.

As his work has evolved, Wallace's creativity has been given free rein, exemplified by this homage to the classic video game, Donkey Kong. 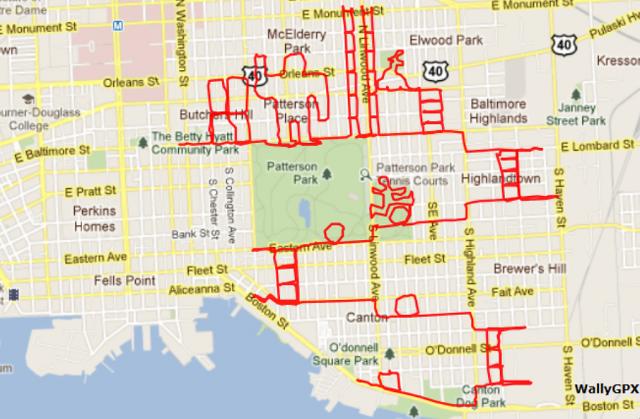 As for the website, Wallace said, “The look of WallyGPX.com may change someday in the future, but for now, it’s set up as a spot for people to come and enjoy.

“As for art shows, those too have been a blast to be a part of. It is notable to mention that my good friend and printing assistant Jeni Queen has been a tremendous help with the production of my images, and they are continuing to evolve in digital complexity.”

Wallace has previously said that Jellyfish Invasion, pictured above, is the most challenging work he has created.

“That was a monster of a ride,” he told the website Baltimore Guide in November.

“To go down each tentacle and come back up the exact same direction was nerve-wracking, because if you made one wrong turn it was over.”

He added that he often gets curious looks while out on a ride which, more often than not, is accompanied by a Rolling Stones soundtrack.

“I’m really the only person who knows what I’m up to,” he admitted.

“So when I’m riding down a street, I stop, turn around, ride to the next block, stop, turn around. People walk around and look, wondering what is this guy up to? He’s got a map in his hand, the headset on.”

One section of the website is devoted to the works that Wallace plans to execute during 2012, one of which, ‘Continental Drift’ is particularly striking – a map of the world traced using Baltimore’s street network.

Within the constraints of the urban milieu within which he’s working, it’s obviously impossible to record every specific detail – Wales, for example, is missing, as is most of south-western England, we’d we’d like to think that road.cc’s own home city of Bath does just about squeeze in. 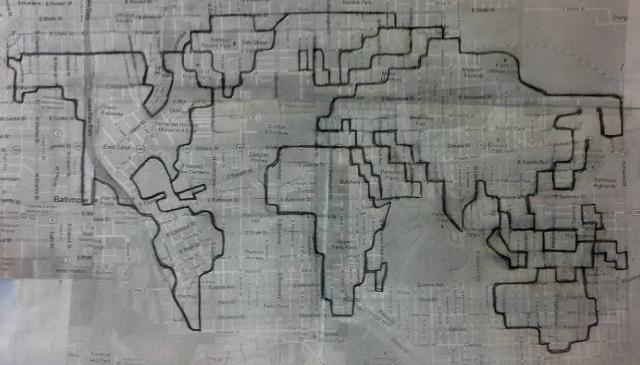 It turns out that the work is by far his most ambitious to date. “Yes, ‘Continental Drift’ is going to be a monster and I am so fired up to pull that one off,” he told road.cc.

“I'm planning on starting early and going all day until I'm done. The ride distance is going to be epic (for me, at least), and I just don't know how far it'll be.

“I do have a friend who wants to ride it with me (bringing water and batteries and such). I am anticipating needing battery considerations so I'm also planning on using an external battery-boosting device to keep it hot.

“The idea is to lead up to that one and do it when I'm mid season,” he continued. “If I do it right, I'll blend into the scene & nobody will ever know what I'm up to.

“Planning it, or any of my rides, is a blast. The ‘Continental Drift’ ride plan took hours of planning. It'll be the largest physical piece of paper I've ever rode with, and the mystery of how it will go is nearly as exciting as the finished line itself.

“I don't plan on changing any of it now. I've already looked it over in satellite view to confirm the pathway. I have had to improvise on the fly when I come to occasional construction, but other than that, my starting and finishing points are in place,” he concluded.

We can’t wait to see the finished result, and in the meantime you can keep up to date with developments on Wallace’s Twitter stream as well as on WallyGPX.com.

Hopefully Wallace's work will inspire some of road.cc's users to get out on their bikes and create some similar works - we'd love to see them if you do.