SRAM have given their top-end Red groupset a major redesign for 2012 and the headline details are these:

• It’s lighter than ever.

• The brake callipers have been totally redesigned; they’re no longer dual pivot.

• The front mech rotates as it moves from side to side, eliminating the need for trim.

• Hydraulic brakes (both disc and rim) are on the way.

Let's take a look at some of the details...

Here’s a breakdown of the weights (along with prices):

Front mech 74g (braze on) with chainspotter and hardware 12g Rather than simply moving inwards and outwards, the front mech pivots slightly as it moves . SRAM’s overhead and overlaid shot shows it pretty well…

SRAM call this Yaw Technology. The idea is that this eliminates the need for trim. In other words, you don’t have to adjust the front mech to prevent chain rub when you move the chain right across the cassette.

Both Shimano’s and Campag’s electronic shift systems trim automatically depending on the sprocket your using for the same reason.

The front mech comes with its own integrated chain spotter – or ‘chain catcher’ if you prefer. The rear mech has been redesigned with extra cassette clearance for use with 28T cassettes. The cable anchor bolt is now hollow titanium and the jockey wheels have had their tooth shape refined. They still run on ceramic hybrid bearings. SRAM claim the overall design is quieter and more efficient than previously. Previous versions of SRAM’s Red brakes have been dual pivot designs. These are very different.

The purpose of changing the design was apparently to cut down on wind resistance; SRAM wanted an more aero brake body. So, they’ve come up with a new arm shape that they call AeroLink. They reckon that as well as reducing the frontal area, the new brake has high power and improved modulation. Essentially, this is a single-pivot design with a cam in there to improve the performance. The brake comes with a four-position quick release and a bladed barrel adjuster. It also gets lighter, aero brake shoes and high-quality SwissStop Flash Pro pads, and it’s compatible with wheel rims up to a maximum of 28mm width. 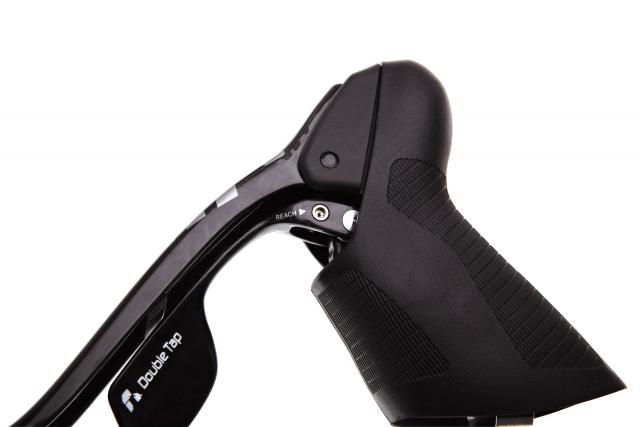 SRAM have altered the shape of the Red levers significantly. They’ve reduced the grip diameter of the hoods, added a taller bump profile at the front of the shifters and increased the length of the brake lever so that it’s easier to reach from the drops.

The independent reach adjustment for the brake and the shift lever are easier to access than previously – you just use a 2.5mm Allen key to dial them in your preferred distance from the handlebar. SRAM have also made the tops of the hoods textured to improve the grip. The new Red Exogram chainset is larger than previously and, according to SRAM, significantly stiffer. They’ve increased the cross-sectional area of the arms and made them hollow all the way to the spider. The new X Glide R chainrings are machined from 7075-T6 aluminium plates that are each 5mm thick and SRAM reckon they’re stiffer than before. Red now gets a Quarq Power Meter branded up as part of the groupset - the only groupset out there to have this. It's said to be accurate to +/- 1.5% while the electronics are integrated and sealed to minimise interconnections and reduce exposure to the elements. The idea is to increase durability and reliability. SRAM are calling their new Powerdome X cassette ‘the most advance cassette ever made.’ At 135g, it’s pretty darn light. The eight middle sprockets are machined from a single block of steel to add stiffness. 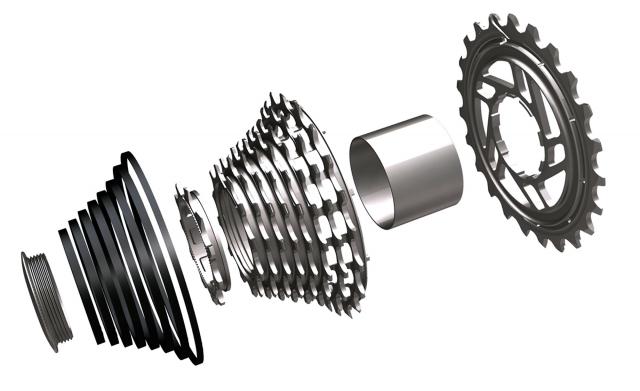 Then, between each sprocket, SRAM have added an elastomer ring – called a StealthRing – to help eliminate vibration and noise.

Although SRAM won’t confirm it, the rumour is that they’re trying to work on electronic shifting but they’re struggling to get around all the patents that have been put in place by Shimano. This could be nonsense, but that’s what we’ve heard from bike industry sources.

Shimano and Campagnolo each have two electronic groupsets on the market already so SRAM are already way behind here… assuming they intend to take part in the electronic race at all. We can’t imagine they don’t want a piece of the action, particularly if/when electronic shifting trickles down to the mainstream.

SRAM have already told us that hydraulic brakes are on the way for Red later in the year (see below) but they’ve made no mention at all of electronic shifting, and none of their pro riders are using any, so we’re assuming it’s far from imminent.

2012 SRAM Red will be available from March but SRAM have already told us that hydraulic brakes will be added to the range later in the year. They should be available in the autumn, although no exact date has been given.

SRAM said, “It’s been rumored that SRAM is developing RED level hydraulic brakes. We want to confirm this and let you know that we are currently working on a hydraulic disc brake and a hydraulic rim brake. Information on pricing will come at a later date and no photos are currently available.”

So, there you go. You've been told. SRAM have also said that these will be the key features:
• The hydraulic disc brake will be drop bar DoubleTap lever actuated. They’ll feature an all-new master cylinder and calliper, and they’ll come with 140-160mm discs.

• The hydraulic rim brake will also be drop bar DoubleTap lever actuated and will have enough clearance for up to 28C tyres. They’ll be compatible with Zipp Firecrest rims.

We’ll be interested to see how SRAM’s hydraulic rim brakes compare with Magura’s RT8 TTs that were launched on the Cervélo P5 last month. The levers for the Maguras are TT base bar only to begin with. Their converter for use with drop-bar shifters will also become available some time this year so there’s a bit of a race on here.

Here's the breakdown of RRPs on the individual components:

For more information go to www.sram.com.