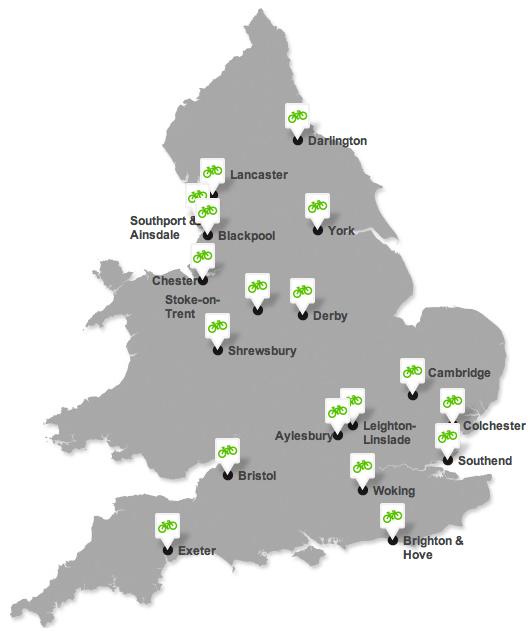 Reports put online by government with little fanfare or fuss - and it's left to the reader to draw national picture...
by Simon_MacMichael

In an unannounced move, the Department for Transport (DfT) has published on its website, quite without fanfare, 17 separate End of Programme reports provided to it by the 18 local authorities involved in the now-defunct Cycling City and Towns programme.

Published on the DfT website without an accompanying press release nor any other announcement we are aware of, there’s no attempt to portray the national picture or draw broader lessons from the initiative – emblematic, perhaps, of the fragmented and decentralised approach adopted in this area and others by the Coalition Government. If Cycling England were still around, one imagines the presentation would have been rather different and more cohesive.

Publication of the End of Programme reports, the eventual provision of which to the DfT would presumably have been a requirement of securing funding in the first place, comes a little more than a year after an interim report on the evaluation of the programme was published; however, there’s no news of when the final report might be made available.

Although it was published in January 2011, that interim report compiled by a consortium led by AECOM in partnership with the University of the West of England and the Tavistock Institute remains the most up-to-date assessment of the impact of the programme as a whole.

The Cycling City and Towns initiative sprang out of the Six Cycling Demonstration Towns which began receiving funding in 2005.

Between 2008 and 2011, a total of £140 million was spent by the DfT, Department of Health and Cycling England on promoting cycling, with £50 million going to the Cycling City and Towns programme, which also benefited from match funding from local authorities.

Despite the efforts of campaigners to save it, Cycling England – and with it, the Cycling City and Towns initiative – was one of the victims of the Coalition Government’s ‘Bonfire of the Quangos’ in 2010.

The End of Programme reports for each of the local authorities included in the Cycling City and Towns programme (listed below) can be downloaded from the DfT website.