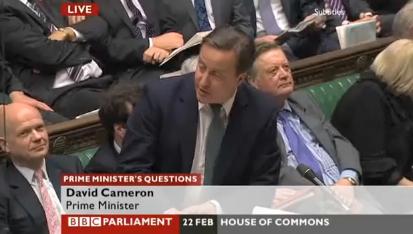 PM flags up recent investment, but it's a lot less than went to Cycling England, which his government axed...
by Simon_MacMichael

David Cameron has today backed The Times newspaper’s Cities Fit For Cycling campaign at Prime Minister’s Questions and acknowledged that “we do need to do more to try and make cycling safer.” He left no doubt that he believes cyclists are at risk on the roads, saying that if you ride a bike, especially in major cities, “you are taking your life into your hands every time you do so.”

The Prime Minister who used to regularly ride to the Commons before coming to power, stopped short, however, of pledging any more money for cycling, instead referring to cash already pledged under existing initiatives.

Mr Cameron was responding to a question from Dr Julian Huppert, the Liberal Democrat MP for Cambridge, who is co-chair of the All-Party Parliamentary Cycling Group and who has tabled tomorrow evening’s Westminster Hall debate on cycling.

Dr Huppert asked Mr Cameron: "Tomorrow members of this House will have the chance to debate the importance of cycling, following the Times’ Cities Fit For Cycling campaign. The Minister for Cycling – the member for Lewes [Norman Baker] – has made some welcome announcements and investment. There is still much more to do.

“Will the Prime Minister commit the government to support the Times’ campaign, increase investment in cycling, and take much greater steps to promote cycling across the country?"

Mr Cameron responded: "I think The Times’ campaign is an excellent campaign. I strongly support what they’re trying to do.

“Anyone who’s got on a bicycle – particularly in one of our busier cities – knows that you are taking your life into your hands every time you do so. And so we do need to do more to try and make cycling safer.

“The government is making it easier for councils to install mirrors at junctions,” he contiued.

“We’re putting £11 million into training for children, and £15 million for better cycle routes and facilities across the country. I think if we want to encourage the growth in cycling we’ve seen in recent years, we need to get behind campaigns like this," Mr Cameron concluded.

That cumulative figure of £26 million cited by Mr Cameron in the House of Commons will be spread over more than one year and is less than half the £60 million budget that Cycling England enjoyed in 2009/10 alone, and as BikeBiz points out, it was the Coalition Government that Mr Cameron presides over that abolished that body and axed the associated funding last year.

1
Threat to axe New Forest’s off-road cycle network as court criticises “out of control” cyclists
2
Brexit price rises - Canyon covers some costs but UK buyers will still pay more
3
Blow for active travel in London as High Court judge rules Sadiq Khan’s Streetspace initiative unlawful
4
Shimano takes over Tour de France neutral support from Mavic
5
Near Miss of the Day 523: Tipper truck driver pulls out in front of lorry and cyclist
6
Bike at Bedtime: take a look at the Wilier Filante SLR
7
eBay seller refuses to accept bike auction offer – says "would be unhappy if I sold to Scouser"
8
Council has "no intention to enforce" parking restrictions in segregated cycle lane where cars are parked bumper to bumper