Here’s the Cervélo S5 VWD that belongs to Garmin-Sharp’s Dave Zabriskie, and a very interesting bike it is too.

We rode an S5 at last year’s Eurobike and had a lot of time aboard one at the launch of Cervélo’s P5 time trial bike earlier in the year. It’s an aero road bike that has to be among the fastest out there. Point it in a straight line, lay down some power and it absolutely flies.

This is the VWD version – VWD standing for Vroomen White Design. Gerard Vroomen and Phil White are the founders of the Cervélo brand. The S5 comes in three versions: the straight S5, the S5 Pro which is 100g lighter, and the S5 VWD which is the top model. It’s the lightest of the lot, the frame coming it at under 1,000g. 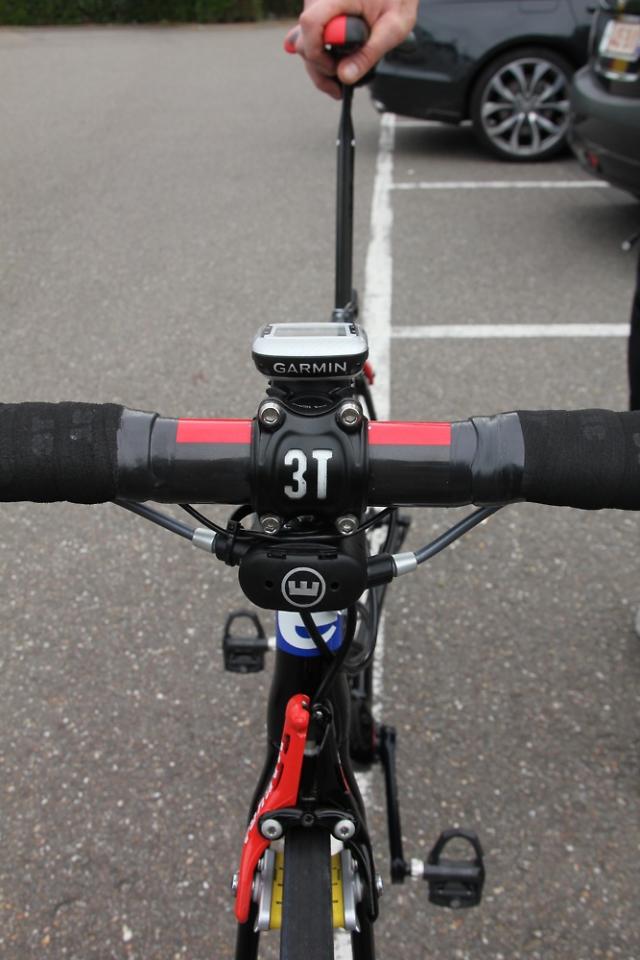 The frame tubes on all the S5s are ultra-skinny to keep the frontal area down, and the same goes for the fork legs and the seatpost. Essentially, Cervélo have taken the aero know-how they’ve developed over many years in the triathlon/time trial world and transferred it over to a road bike.

The down tube sits close behind the front wheel to smooth the flow of air from the fork to the frame and the fork crown blends into the frame to avoid any turbulence up there. 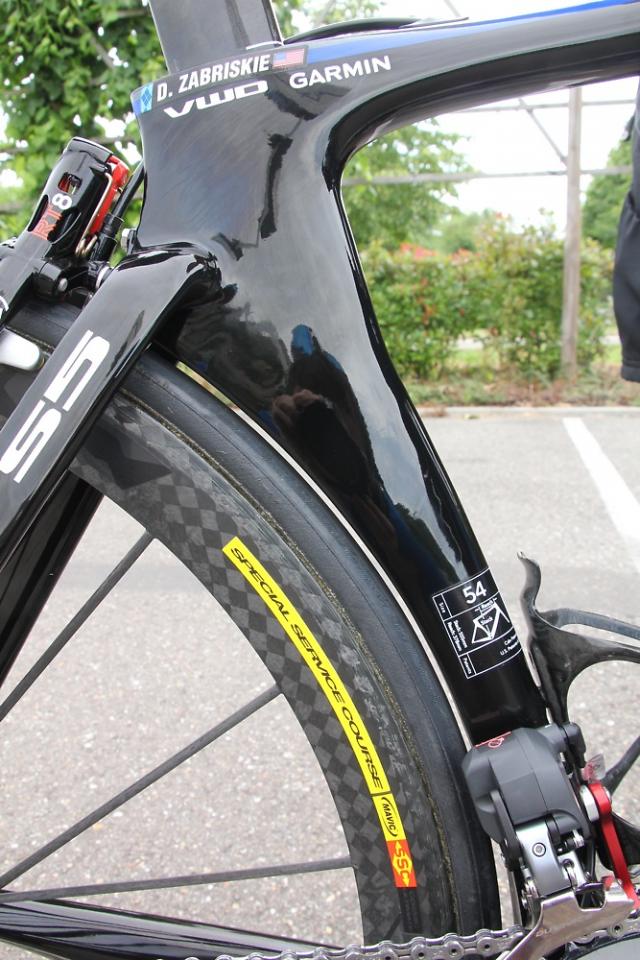 The seat tube arcs around the rear wheel to smooth the airflow while the seatstays stay wide of the wheel for as long as possible to avoid interfering with the aerodynamics there, darting in at the last second to join the seat tube. (Not every S5 has a reflection of Tony taking a photo on the seat tube, although that's probably not a bad thing). 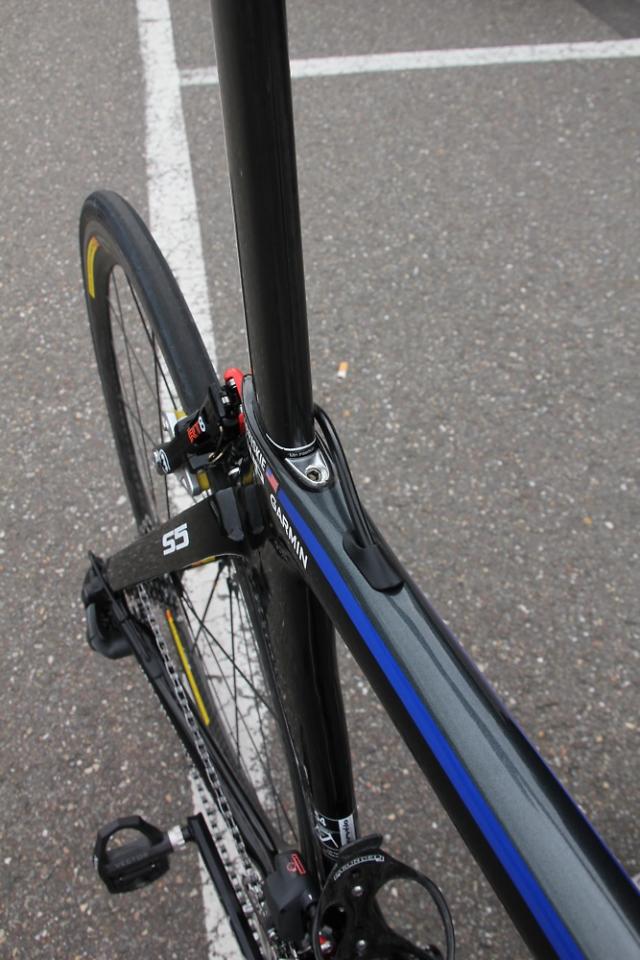 The seatpost clamp sits flush with the top tube and the rear brake cable runs internally to reduce drag.  The cables for the Dura-Ace Di2 groupset run inside the frame too. 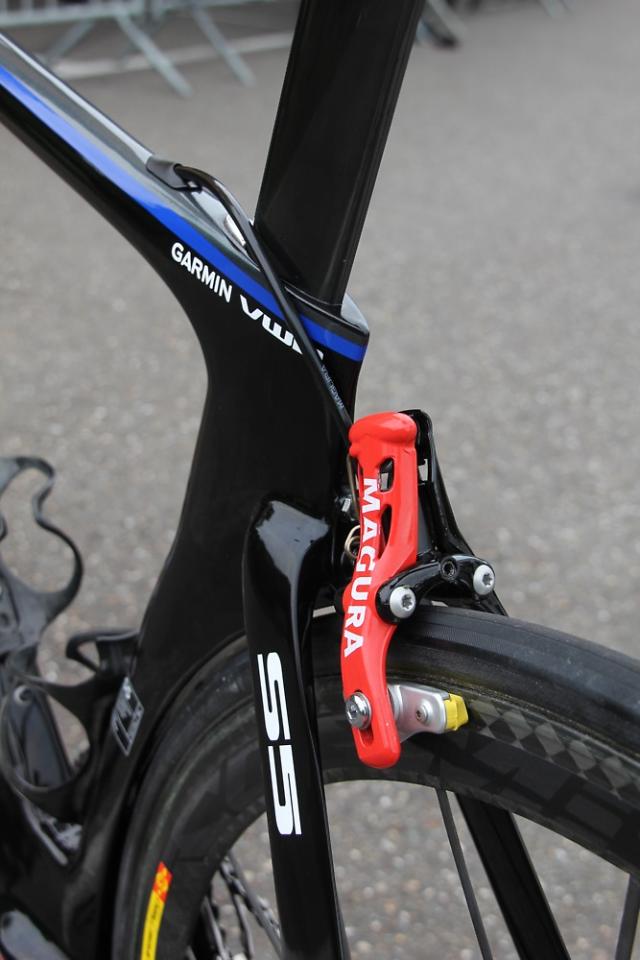 One feature that’s unique to Garmin-Sharp are those Magura hydraulic rim brakes. In fact, only a handful of the team riders have them. We spotted them on the bikes of Davids Zabrikie and Millar alone.

The RT8 brakes are a feature of the new Cervélo P5 time trial bike although they will be available to buy aftermarket too. They are very, very powerful and offer superb modulation. Plus, being hydraulic rather than cable operated, they’ll put up with all kinds of convoluted internal routing without any loss of performance. 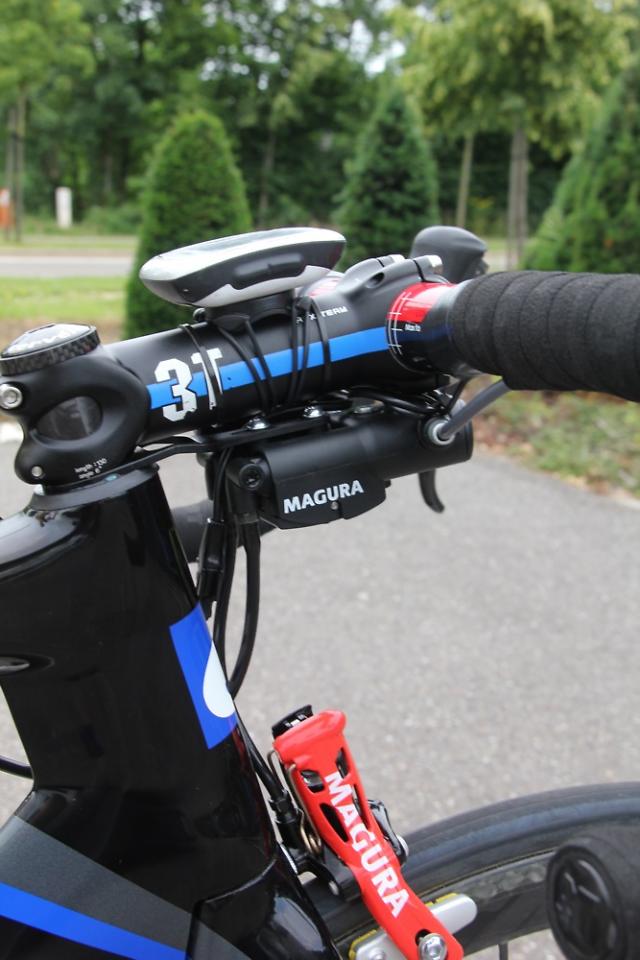 Anyway, Garmin-Sharp have decided to run the RT8 on some of their road bikes too. But the thing is, Garmin-Sharp use Shimano Dura-Ace groupsets and there’s no such thing as a Dura-Ace lever for hydraulic brakes. That means they have to use a cable to hydraulic converter. In other words, pulling the lever draws a cable as normal, but that little box of tricks under the stem changes it into a hydraulic force acting on the calliper. It’s clever stuff. 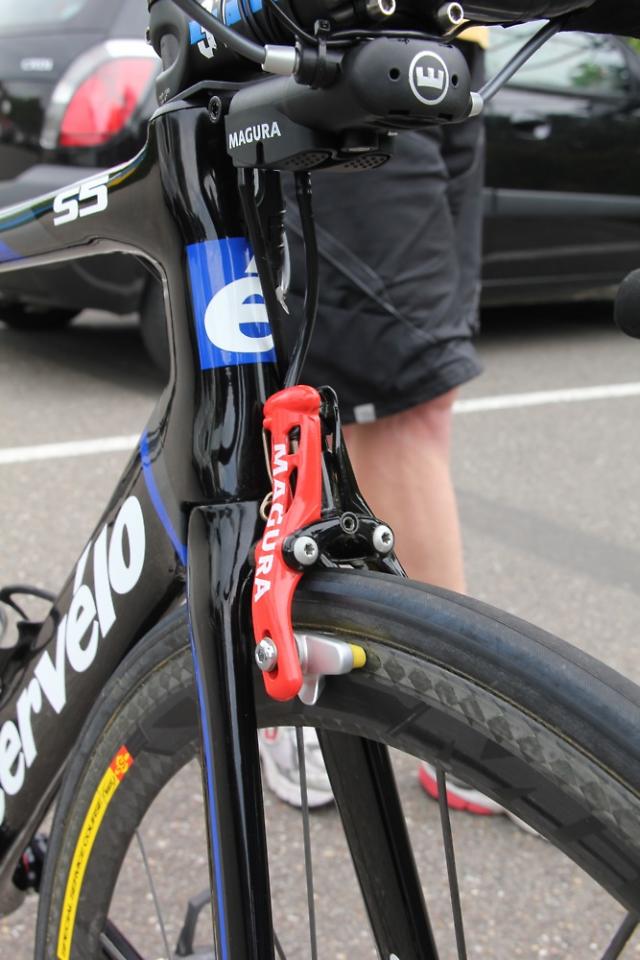 But you must be thinking what we’re thinking, right? You’ve got one of the most aerodynamically advanced road bikes in the world fitted with deep-section wheels… and then you stick that chunky converter on the front end, right where the wind hits first. Aerodynamics is a complicated business and it throws up no end of surprises – but if that flat leading edge and squared off sides are anything like aerodynamic, well, we’ve misunderstood the subject entirely. We did notice, by the way, that when Zabriskie was in the break of yesterday's stage of the Tour, he was using standard brakes rather than hydraulic brakes.

Those are Mavic Cosmic Carbone Ultimate wheels, by the way, with 40mm-deep elliptical sidewalls and a complete weight of just 1,185g (Mavic’s figure), 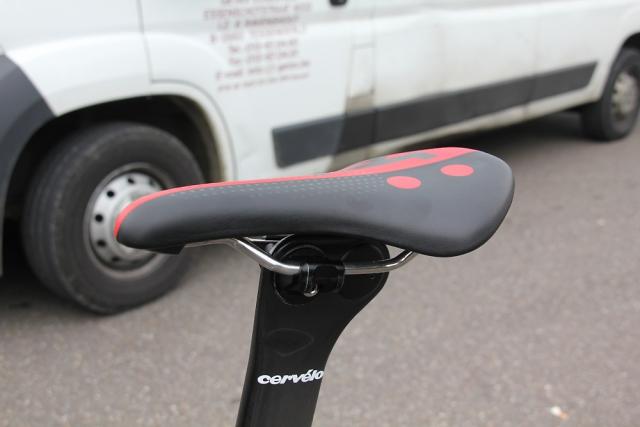 That's a Fizik Ares time trial saddle. It’s pretty short at 240mm compared to an Arione which is over 300mm long. The mechanics told us that Zabriskie had his time trial position sorted out and then wanted to transfer a similar position onto his road bike so he decided to go with the same saddle. 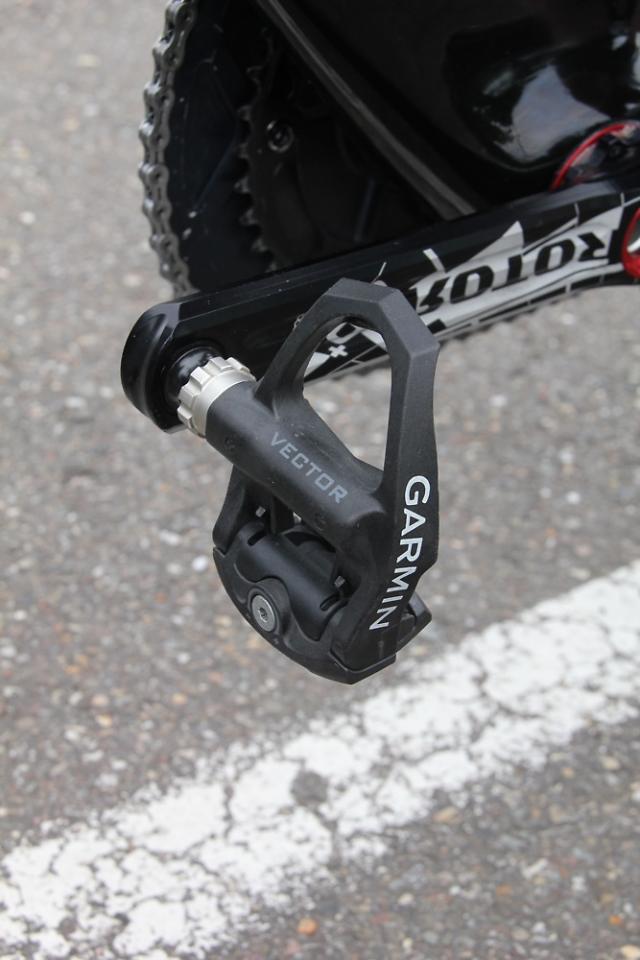 Those are Rotor 3D+ cranks on there fitted with Garmin Vector power-measuring pedals (Look Kéo compatible) although we saw no sign of the sensor needed to send the readings over to the Garmin Edge 500 computer. 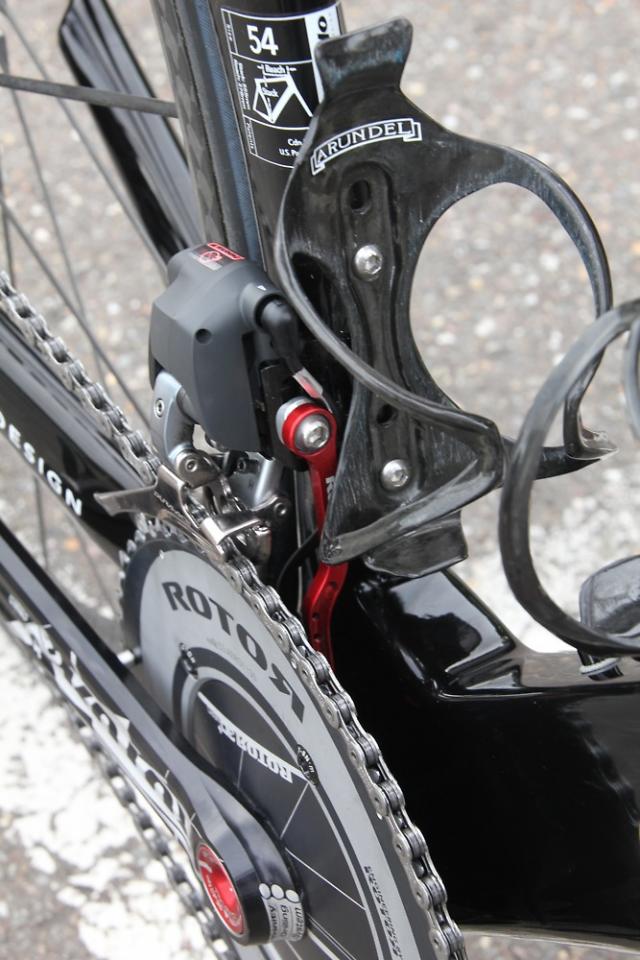 Anything else to report? Oh yes, those are Arundel Mandible bottle cages. If your bottle comes out of one of those bad boys you’re doing something wrong because they grip like a vice.