We're over at Trek World Europe in Frankfurt at the mo having a look at the fresh goods from Trek and Bontrager. You've probably already seen that they've got Fabian Cancellara's Trek Domane from the Tour over here, but that's not the only interesting Domane on show. There's also one, believe it or not, that you can get on Cyclescheme.

A Domane for £1,000? That's right. Obviously it's not a pro-level, OCLV Carbon dream machine like Fabian's bike, but it's interesting nonetheless. Essentially, Trek have brought the IsoSpeed technology to an Aluminium frame and called it the Domane 2 series.

If you're not up to speed with the IsoSpeed decoupler, then the basic premise is this: in order to tune the ride of the bike at the seatpost, it's better if you don't have to deal with the fact that it's bonded to the top tube and seat stays. That way you've got all of the seat tube to play with, rather than just the top couple of inches. The IsoSpeed decoupler isolates the seat post from the top tube and stays so that it can flex independently. Trek are very careful not to talk about the decoupler as a pivot, as it's not really acting as a pivot in the way most people would understand from a suspension setup. In purely engineering terms, though, that's basically what you have, hidden by a rubber insert that's simply there to keep the junction clear of grime; it doesn't perform any damping duties. The fact that the seatpost is decoupled from the frame at that point means it can be much more compliant; in the Carbon bikes compliance is increased over the Madone from 23mm to 35mm. We don't have figures for the Aluminium bike just yet, but we'd expect it, like the Carbon frame, to be a significant difference. To build the bike in Aluminium with the decoupler throws up a whole set of new problems, not least the fact that Aluminium fatigues over time in a way that Carbon doesn't. But Trek are happy that they've got the Domane 2 series frame dialled in terms of compliance for the rider and stiffness for the power in the same way as the higher-end models. 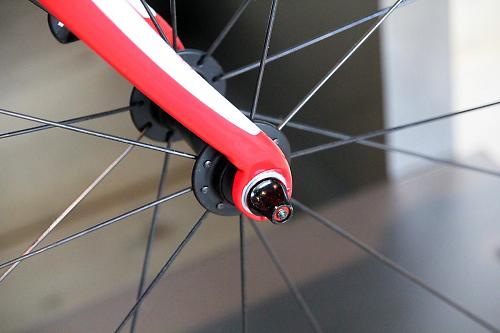 Up front the Domane 2 series has a Carbon IsoSpeed fork that uses the same design as the more expensive bikes in the range, with the fork blade arcing over the top of the dropout to give more vertical compliance at the front too. The Domane 2.0 is built up with 10-speed Tiagra running gear and a compact chainset for exactly a grand. If you want 105 components then there's a Domane 2.3 that's a couple of hundred quid more. We've put our names on the list for one of the entry-level bikes, so stay tuned for a just-in and a review.