Most bike brands have a Shimano Ultegra Di2 equipped bike in their range for 2013 and Merckx are the latest to offer such a bike in the shape of the Merckx EMX-3 Ultegra Di2. We got the chance for an exclusive first ride recently.

The Merckx EMX-3 is the company's fourth-tier carbon fibre road bike (the brand new EMX-525 recently launched at the top pushing it down a rung). This EMX-3 model is the most expensive in the range at £3,599.99. Considering you get an all-carbon frame and fork, electronic groupset and decent finishing kit (Fulcrum Racing Quattro wheels, 3T Ergonova bars and Arx Pro stem and Prologo saddle) is pretty good value.

As the first 2013 sample arrived at UK distributor i-ride.co.uk's East Sussex office last week, we were given the chance to take one out for an exclusive road.cc first ride. We of course jumped at the chance, and headed down to take the new model for a spin last week. This isn't an in-depth review, by the way. We'll aim to do that once we've got the bike in for a proper long-term test.

Based in the shadow of Ditchling Beacon (that iconic London to Brighton climb), we avoided the temptation to head straight up the climb and instead headed west. Why? Well we couldn't face such a stiff climb so early in the ride. There's some lovely roads around this area of the country to explore though, and they're quite different in character to those that make up my usual riding. More undulating you could say, and it's on these fast rolling roads that the Merckx quickly starts to impress. The weather wasn't that great during the morning. Let's be honest, it was lashing down with rain as we were fixing a water bottle in place. Out came the oversocks and rain cape. For this reason we weren't in any mood to pootle around the lanes enjoying the views, and instead we pressed on. 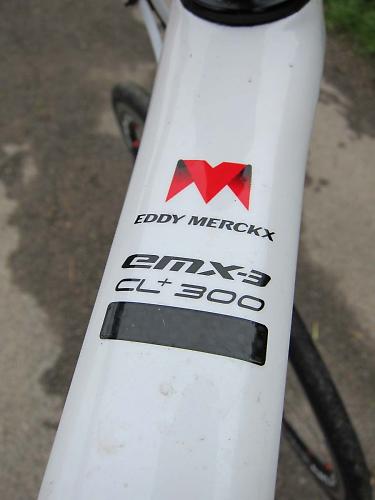 Just as well, because the EMX-3 likes to be pressed hard. Onto the drops and flicking up through the gears, the Merckx strikes me immediately as a very keen bike. It surges forward with real verve. It's apparent they've engineered a high degree of stiffness into the frame - changes of direction are met with positive engagement and it pushes on with gusto.

The route I've chosen gives me a good opportunity to put the Merckx through its paces. It's not an area of the country I'm familiar with, though there's a distinct familiarity to the style of the roads; narrow country lanes weaving through tall hedgerows, undulations that, while not steep, require out of the saddle climbing, and poor road surfaces. And it's on these poorly surfaced roads – the top layer of Tarmac obliterated by bad weather and heavy traffic – that the Merckx surprises. Merckx are aiming this model at the rider who values comfort, whether it's for long days in the saddle or sportives, and on this promise the bike delivers. There's a touch of over-rigidness from the fork though - occasional crashing through pot holes gives it away - but the rear half of the frame is wonderfully smooth. With a 17.3cm head tube (on this 48cm sample; Merckx sizing isn't standard) it's clear this bike is aimed at riders who value a little comfort. It's just enough height without compromising handling and its sporting potential - not too high if you want to race yet just tall enough if you're lacking some flexibility. It's not a bike to waft from feed station to feed station though, it is a bike that rewards the more you put in. The Merckx inspires spirited riding.

The front of the bike gives a very solid feeling. There's good feedback through the handlebars, you can feel the road surface beneath the tyre and, importantly on days when the roads are wet and slippery, how much grip there is from the front. The handling has a crisp precision that will be enjoyed by the rider who wants a lot of feedback from his controls 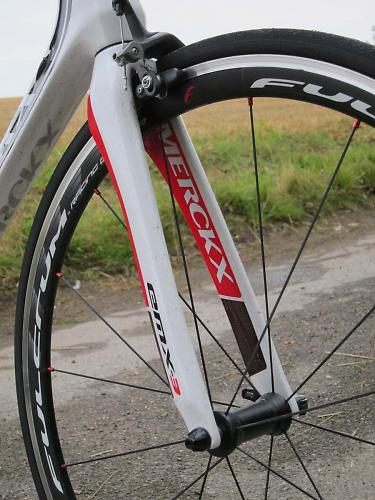 I won't dwell on the finishing kit too much, except to say it all worked fine. The 3T Ergonova bars are wonderfully shaped, not too deep and fairly narrow (42cm). I had to change the stem to something longer - 120mm - and I wasn't too impressed with the 3T seatposts lack of fine adjustment. At bang on 8kg (17.6lb), the Merckx is a good weight for the money. This gives it great climbing potential, which we tested on the tough Steyning Bostal climb. It's ramped steeply at the beginning, levels out in the middle, then ramps up again, more severely this time as you reach the summit.  It's a great test and the Mercxk displays good climbing ability - certainly better than my physical ability.

Weight isn't the only critical factor on climbs, especially those so steep you're forced out of the saddle, stiffness is important too. The Merckx feels good when you're out of the saddle; there's no twisting or deforming under high load, and allows you to feed in power to the back wheel and make good progress.

A key feature of this new model is the fitting of Shimano's most affordable electronic groupset. I'll admit, I haven't spent a great deal of time using the new Ultegra Di2 so I was keen to put a couple of hours on it to see what the fuss is all about.

Its brilliant. The immediate change that brings a smile to my face when you're in the saddle is the reshaped hoods. When Shimano redesigned its STI levers and tucked the cables away inside the hood, rather than sprouting out of the sides, they made the nubbin smaller. I wasn't happy at this change, so to see they've made it taller with this latest design makes me happy. 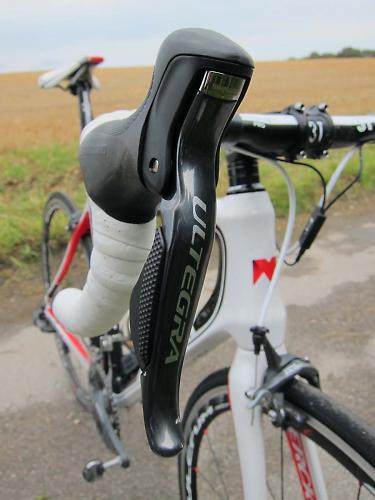 They feel far more comfortable than the current mechanical hoods, with the extra height giving your hands more to grasp onto. When you're crouched down over the bars you can rest your wrists on the bars and hold onto the hoods in a time trial sort of position, and some love this option.

Shifting gears takes some retuning of the old grey matter. If you've ridden Shimano for years, the action required to change gears is probably as second nature as scratching your arse. Di2 requires an action akin to clicking a mouse. 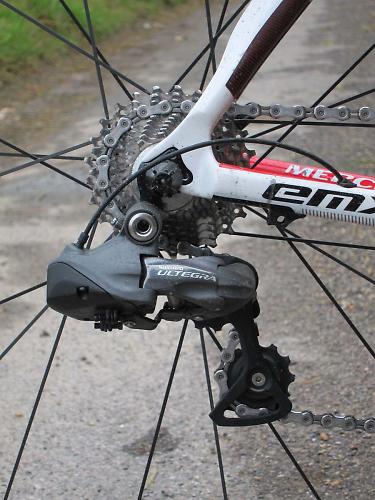 It does take some miles to get used to. I still found myself making a few mistakes an hour into the ride. They feel very different. The actual shift action is delightfully quick, crisp and sharp. Rear shifts are very quiet; you barely hear a pip. The front derailleur is a little noisier, however. A whir accompanies the movement of the chain as it travels from the small ring to large. Front changes are the most radical departure from mechanical, and here the groupset really won me over. Mechanical Shimano front changes require a large sweep of the lever to push the front mech over – electronic just needs a press of the button. The front mech will also auto trim - no matter what gear combination you're in, the chain won't rub on the mech cage. You can only change one gear at a time, which is a pity. It would be nice to be able to sweep across the cassette without having to press the button multiple times.

Based on an admittedly limited ride of a couple of hours, this was never going to be a fully conclusive test. After this short ride, however, we came away highly impressed.

It may not be the company's top-end offering but it impressed us. The EMX-3 Ultegra Di2 is engaging, fun, fast and agile, and demands to be ridden with a bit of gusto. It's comfortable too, with a decent height head tube for those who don't wish for a slammed front-end, but still want a bike that can be raced or ridden hard.

We can't wait to ride it again.

Find out more at www.i-ride.co.uk