FSA have unveiled their latest flagship chainset, the K-Force Light Compact BB386Evo, which is stiffer, lighter and offers more precise shifting than any of their previous offerings.

They've been two years in development and they have a new four-arm five-bolt spider, with one bolt concealed behind the crank arm. The power you apply to the cranks isn’t equal through the pedalling stroke, the load peaks when the leading crank arm is roughly level, says FSA. So by rotating the spider and placing the fifth bolt behind the crank arm, the design puts extra strength where it's needed most in the pedal stroke.

They call this Asymmetric Bolt Spacing (ABS), and it’s similar in essence to the idea behind Shimano’s 9000-series chainset. Those have a four-bolt spider and they've placed the four arms where they feel the areas of highest stress are in the pedalling stroke. Both have in common hidden bolts for very clean aesthetics. 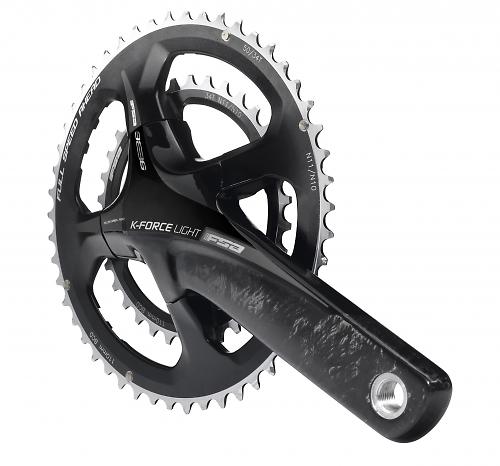 FSA have also developed new ABS chainrings, which are 3D forged and CNC machined 7075 aluminum, with teeth profiles and shift ramps that they claim delivers crisp and precise shifting. The crank arms are made from hollow carbon with a unidirectional finish, and they weigh a claimed 584g.

It’s available in a Shimano 11-speed version and there’s three crank arm lengths (170, 172.5 and 175mm) and the four-arm BCD accepts both compact and standard chainrings. They will offer the choice of 46/36T, 50/34T, 52/36T and 53/39T.  At the same time as making all those changes, FSA have given the cranks a fresh new look that is a bit of a departure from their previous models, a bit sleeker and more subtle we reckon. There’s also a plain black version. There’s no word on availability or pricing yet, but they’ve launched them just before the Tour de France so expect to see a few riders pushing these cranks in the Grand Tour. We wouldn’t imagine they’ll be available until after the Eurobike show in September. As for pricing, there’s no word on that yet, but with the previous version of these cranks costing £599.99, we expect them to be in the same ballpark. More at www.fullspeedahead.com