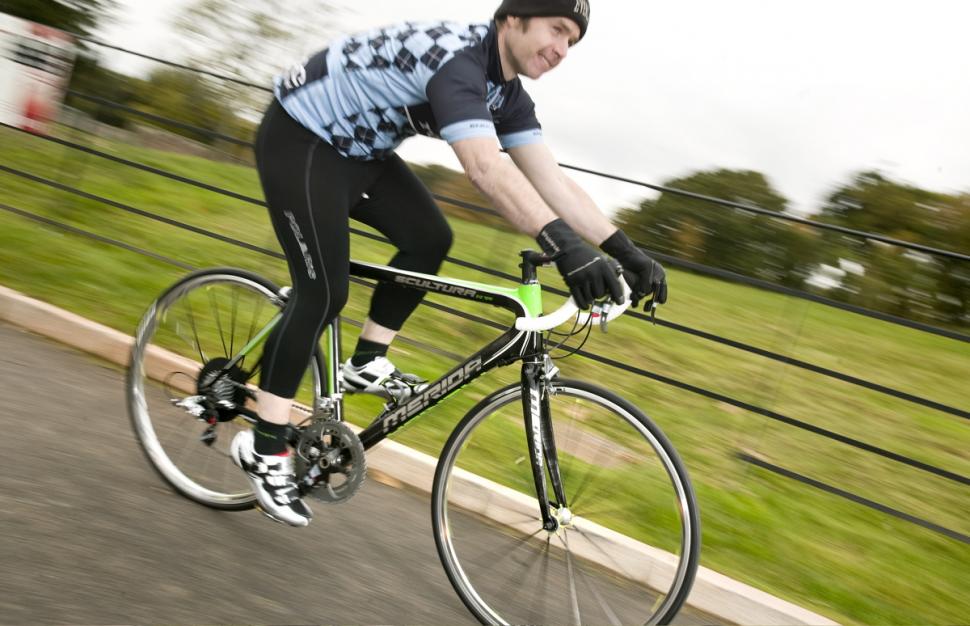 A bigger range for next year, some of which we made off with
by dave atkinson

Merida were just down the road at Ashton Court in Bristol today, showing off their 2009 wares, so we popped along to check out their latest road offerings. And there was lots to see: road bikes, time trial irons, cyclo cross machines, urban workhorses - you name it, they have it covered this year with a bigger range than we've seen previously in the UK. We had a first ride on a couple of the range and also managed to blag four bikes for full testing, so look out for them soon on road.cc. 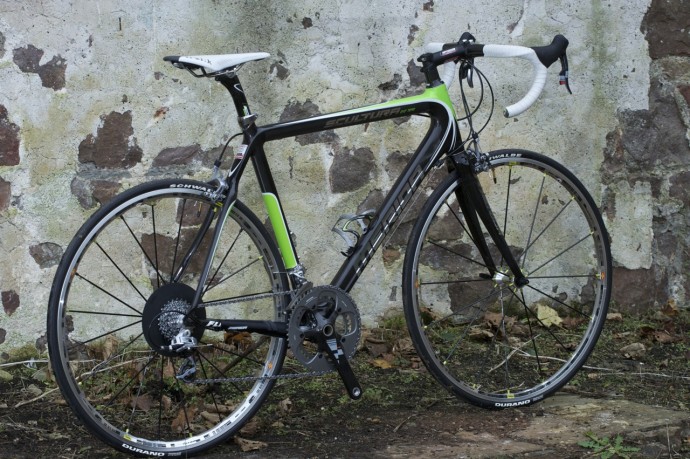 Top of the pile on the road side is the new Scultura Evo, a new monocoque which sits above last year's frame which Merida are continuing to produce and sell on at a lower level - a trend we're seeing more and more among big manufacturers. Merida told us that it costs around £200,000 to tool up to produce a new bike such as the Evo, so it's not surprising that they're trying to recoup that investment over more than a single year. The new frame is (Merida claim) in the top three in the world where stiffness to weight ratio is concerned, and the sub-UCI Team 20, with SRAM Red drivetrain and Mavic SSC wheelset comes in at a mote under four grand. There's a poor man's Ultegra SL version for £2,300. The old Scultura, with its quirky lugged-effect monocoque carbon frame, looks good value at £1600 decked out with Ultegra transmission and Mavic Aksium wheels. We've got the the top-dollar Evo in the back of the car, so it's compare and contrast time - how will it stack up against the Cervelo we had last week? 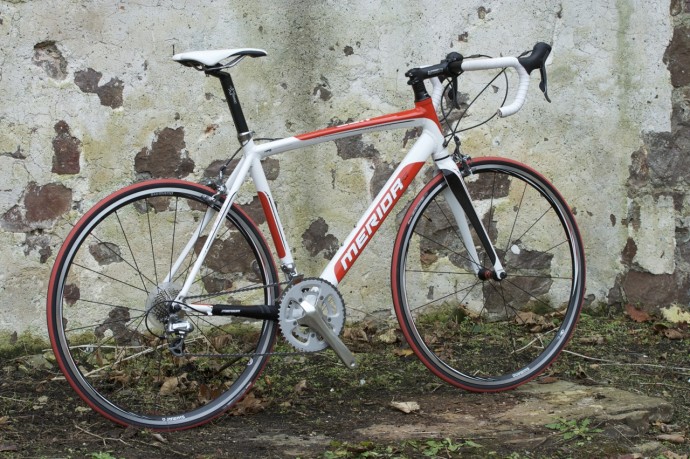 Lots of manufacturers have cottoned on to the the £999 cycle to work scheme limit, which used to be a bit of a gap in many manufacturer's ranges, and Merida are no exception. Their offering is a hydroformed Alu frameset with 105 gears and Shimano RS10 wheelset, whichwe would have probably been more impressed with had we not seen Boardman's carbon-framed, Rival-equipped, 17.3lb machine for the same money last week. Also, the paint job is a little pedestrian, especially compared to the foil logos and green swirls of the Evo. 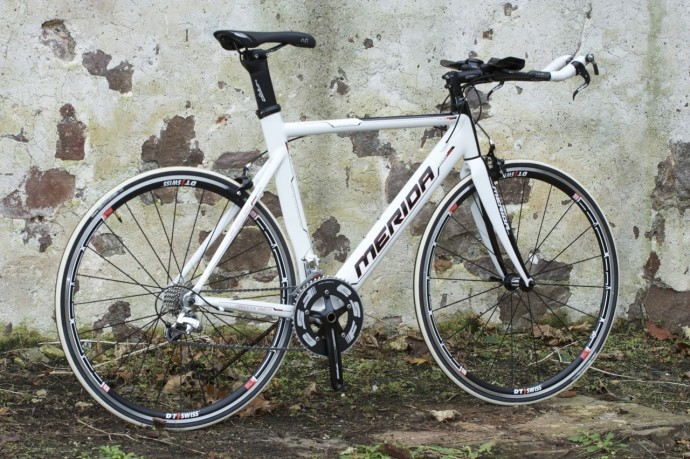 Time trial bikes are on the agenda too this year. There's only one frame - a good looking Aluminium offering with smoothed welds for extra slipperiness - and three build specs. £3299 buys you the wishlist Warp 9, including Zipp deep section wheels and TT-specific SRAM Force switchgear, but for a very reasonable £1399 you get the Warp 5, a proper out-of-the-box TT bike with Ultegra bar-end shifters and FSA aero brakes: it's worth spending the extra over the £1199 Warp 4 which has standard STI levers. All three bikes feature the now-ubiquitous two-position seatpin, the Warp 5 and 4 get an extraordinarily wide Selle Italia NTI saddle that looks like it's fallen off a downhill bike - still, plenty of nose to perch on... We've nabbed the Warp 5 for testing, watch this space. 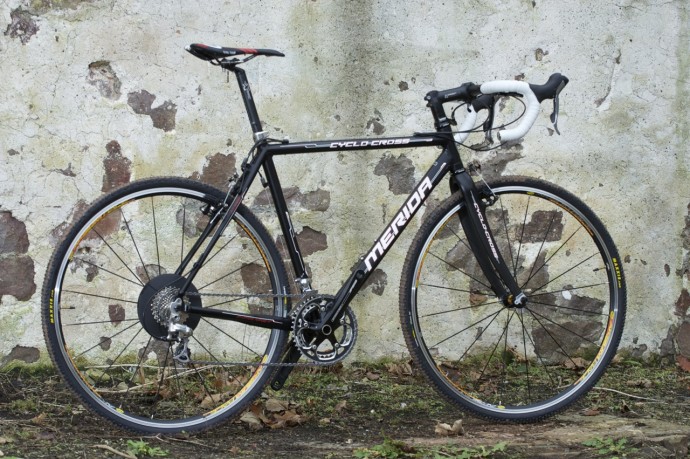 The cyclo-cross range has two frames and three specs. Top of the pile is the CC5, which gets a lightened frame and a Ultegra/105/FSA component mix that looks tough enough for a race season. Aksium wheels complete the package and the bike comes in at £1099. The CC4 at £899 is only half a rung down in terms of componentry, but is built around the heavier frame, and the £699 CC3 features Tiagra 9-speed 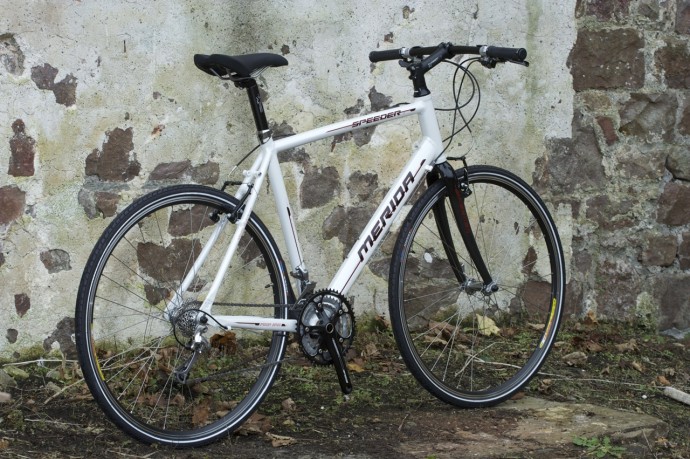 On the city streets there's any number of different bikes to choose from. The Speeder range is Merida's Sirrus/FX-alike, and the £629 T3 certainly seems to be giving the big boys a run for their money in terms of spec. Okay, you don't get the carbon chainstays of the £650 Sirrus comp but you do get a higher spec transmission with Ultegra mech and outboard BB, and uprated wheels and controls. We've yet to weigh the T3 but we're expecting it to come in under the Comp, and we have one to test so we'll see how it compares to the benchmark bikes in terms of the riding experience. One thing to note is that the long top tube and stem make it ride at least a size bigger than what's printed on the seat tube, so bear that in mind when you go for a test ride - the 55.5cm bike fitted testers who'd usually be looking at a 58cm frame. There's a hub-geared version (though you're better off looking at the S'Presso, below), and two other spec levels - T2 and T1 - coming in at £499 and £399 respectively. There's no Cyclescheme-friendly £999 urban machine though, which is a shame given how much they've managed to cram into the T3. 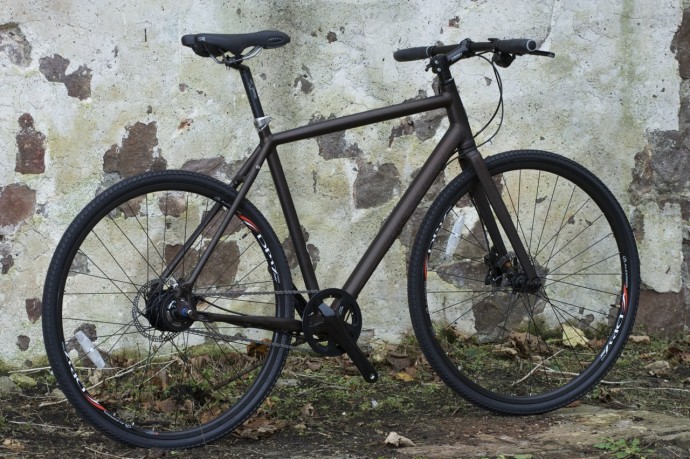 The Speeder is fast, the S'presso is cool. That's Merida's thinking, anyway, and the £729 i8-D model is certainly understated and classy. The chocolate lustre finish looks lovely with the black Alfine running gear, and you also get the excellent Alfine disc brakes to boot. Geometry is more relaxed than the Speeder, and it's more geared for cruising the coffee shops than burning up a long commute. The two lesser models are a bit more ordinary, with 27 speed transmissions and black or white paint.