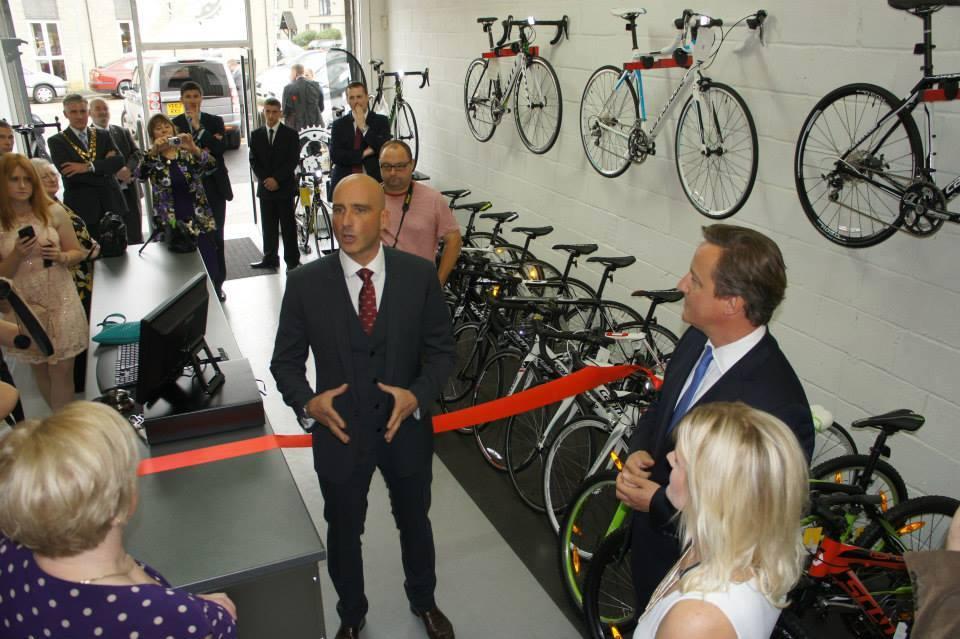 PM at opening of Witney bike shop - weeks after government's response to Get Britain Cycling disappoints ...
by Simon_MacMichael

Prime Minister David Cameron last week showed his support for cycling as well as local business as he helped open a bike shop in his Witney constituency - just weeks after his government's response to the Get Britain Cycling report had been greeted with disappointment by cycling organisations and campaigners.

Describing it as “an aspirational and brilliant shop,” David Cameron was shown around Mickey Cranks bike shop in Witney by its owner, Mick Murphy.

Earlier in the day, Mick - a former military parachute instructor - had delivered a group riding etiquette and safety class for local cyclists.

Mr Cameron said: "We need to get more children cycling to school and encourage a whole new generation of cyclists, and having a really aspirational and brilliant shop like this in the heart of Witney I think will do a huge amount," before wishing Mick and wife Kirsty the very best of luck.

But these comments come in the wake of what was widely perceived as a lukewarm response by the government to the Get Britain Cycling report, published in April after a six-week parliamentary inquiry.

While news that a review of the criminal law in cases in which cyclists are the victims will take place in the new year was welcomed, the response failed to provide a commitment to minimum annual spending levels, nor did it back a national cycling champion, long-term targets or central, top-level leadership, all among the chief recommendations of the report.

One of those, that the government commit to spend the equivalent of £10 per head a year to cycling, ultimately increasing to £20, wasn’t answered at all.

Instead reference was made only to investment that has already been made, including the recently announced Cycle City Ambition funds, which only apply to a handful of successful bidding cities, and not at all to towns or rural areas.

The latter would include the constituency Mr Cameron himself represents, centred on Witney, which has a population of around 23,000, and the surrounding countryside as well as small towns such as Carterton. Charlbury and Chipping Norton.