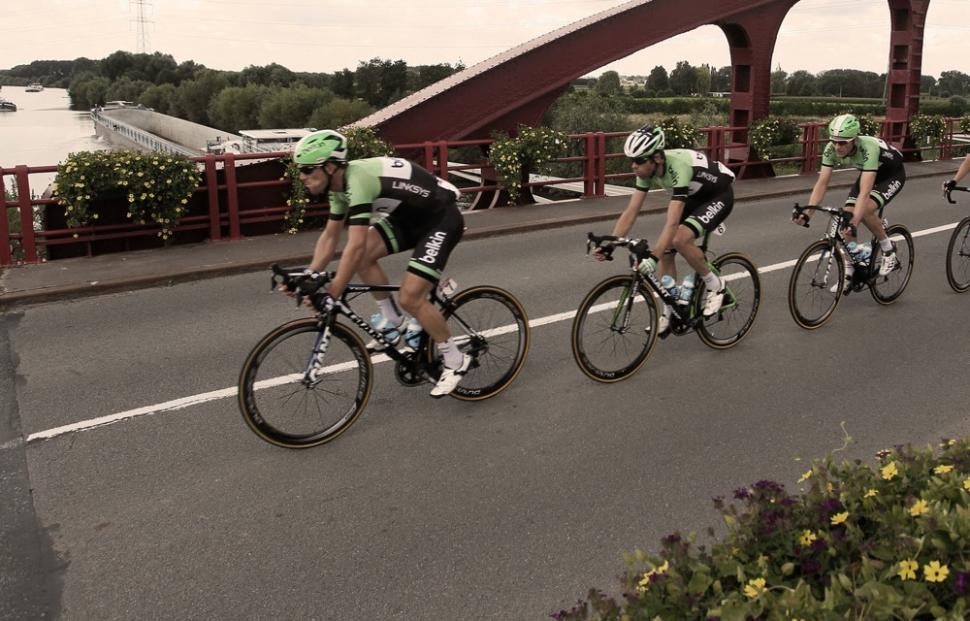 ...But we don't know when
by David Arthur @davearthur

Bell’s yet-to-be-released new aero road helmet has been getting lots of mileage with the Belkin Pro Cycling Team over the past few months, being spotted during the Tour de France and most recently in Paris-Tours, where Jetse Bol attempted a brave solo breakaway only to be caught inside the final 500 metres.

As we know, aero road helmets were all the rage last season and now just about every manufacturer has one in their range. There’s Specialized’s Evade, Giro’s Air Attack, Kask’s Infinity, Louis Garneau’s Course, Scott’s Vanish, POC’s Octal Aero and Lazer’s Aeroshell. Aerodynamics is becoming an increasingly important strand of design for manufacturers, and with the rider producing about 80% of air drag and only around 20% down to the bike, reducing drag around the head and body has obvious benefits, especially to pros seeking any performance gain, no matter how small.

Bell’s new offering, of which there are no details yet, looks to be a ground-up design rather than being based on their existing Gage. The rounded design has more in common with the Giro Air Attack (Giro and Bell are brands belonging to the same company, Easton-Bell Sports) or Scott Vanish, with what appear to be strategically placed air vents, small but most likely designed with CFD and wind tunnel testing to get around the problem of overheating. There are two small vents right at the front, a smattering on the top and there look to be quite a few exhaust ports around the back.

There's no doubting the popularity of aero road helmets in the peloton, but they've certainly not taken over from more heavily vented helmets. It seems riders are choosing the aero helmet option, if they have one, for select stages and races. The ventilation compared to a regular helmet is still an issue on very hot stages, something which the manufacturers are taking different approaches to. Kask's rather neat solution is for a large front vent that can be opened or closed.

Bell has also just announced a two-year extension of its sponsorship as the official helmet supplier for Belkin. The team will continue using Bell helmets in UCI WorldTour races in 2014 and 2015. Bell says that the team riders will have an active role in the new generation of future road and TT specific helmets, presumably including this aero road helmet.