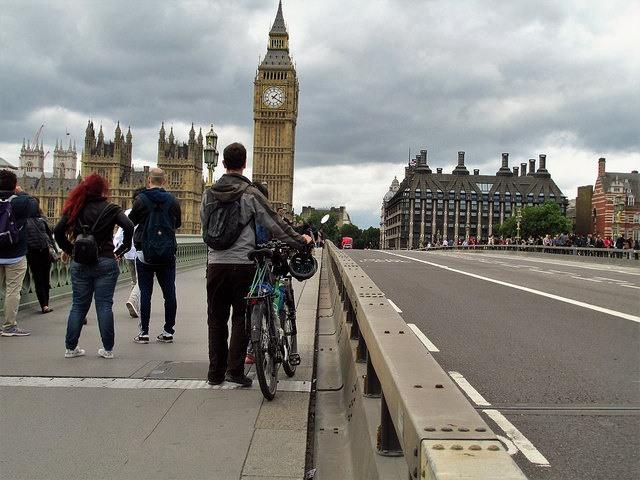 The advice appeared to be for cyclists nationwide, but has now been removed. We've also rounded up road closures in London during Queen Elizabeth II's lying in state along with advice from British Cycling and TfL...
by Tim Bonville-Ginn

British Cycling has now removed a section of its guidance for the period of National Mourning that “strongly recommended” all cyclists around the UK avoid riding during the Queen’s funeral and procession. Meanwhile, the Metropolitan Police has also advised cyclists to avoid closed road areas in London.

In British Cycling’s original article on guidance for the Period of National Mourning, it stated: "As a mark of respect to Her late Majesty Queen Elizabeth II, British Cycling’s guidance is that no formal domestic activities should take place on the day of the State Funeral, Monday 19 September. This includes cycle sport events, club rides, coaching sessions and community programmes (such as Breeze rides).

"British Cycling strongly recommends that anybody out riding their bike on the day of the State Funeral does so outside of the timings of the funeral service and associated processions, which will be confirmed later this week. Once published, we will share the details of those timings on this page.

"As the day of the State Funeral has been designated as a national bank holiday, in line with many other employers British Cycling will close for the day."

...however, the whole section titled 'Events and activities on the day of the State Funeral' has now been amended, with the new paragraph stating: "The date and time of the State Funeral will be confirmed in due course. British Cycling will provide further information on the implications for events and activities due to take place on this day once those details have been published."

The exact reasoning for British Cycling's original advice for its members not to ride during the funeral service and processions nationwide is unclear, with some even speculating on social media that cyclists could be faced with hostility from other members of the public. road.cc has asked British Cycling for comment.

Arrangements in London: what does it mean for cyclists?

Parts of London are completely closed to motor vehicles as well as bicycles as Queen Elizabeth II’s coffin is taken from to Buckingham Palace and then to Westminster Hall where she will lie in state for four days.

People from all over the UK and beyond have been flocking to London to join the huge queue to see the late Queen Elizabeth II’s coffin, where she will lie in Westminster Hall.

This has meant that various roads around Westminster and Buckingham Palace will be/are closed to cars with a huge police presence throughout the capital as forces have been asked to send officers from all over the country.

“Avoid the roads that are closed to motor traffic and use alternatives if possible. Central London will be very busy. It may be too crowded to cycle in some areas.

“Follow the instructions of stewards and police - you may need to dismount and walk at times.

“Cycleway 3 is suspended between Duke of Wellington Place and Northumberland Avenue. Follow the signed diversion.

The following road closures will be in place from around 7am, where there will be no access for vehicles and cycles.

There is pedestrian access only. Bicycles can be pushed but not ridden within the zone. pic.twitter.com/c2OX3Eqtzh

You may walk your bike through if you absolutely need to go through these closed areas, but queues are expected to be multiple miles long with people having joined the queue as early as yesterday. Crowds will be large and it's expected that it will take a long time to walk through.

The late Queen will be lying in state in Westminster Hall for four days before being taken to Westminster Abbey for the state funeral that will take place on Monday September 19.

We will update further on this article and on our live blog as more information comes in, and we've asked British Cycling for further comment on its advice.

1
167 cyclists – and just four drivers – fined in police crackdown during Tour Down Under
2
“Cyclists welcome – just in the right place”: Coastal path upgrades set to be shelved over concerns about environmental impact and “speedy cyclists”
3
The Cobble Wobble – a brutal 179-yard cobbled hill climb – is back after eleven-year hiatus
4
Father and son named as cyclists killed in suspected hit-and-run
5
"Our intention was not to hide these changes": Strava apologises for price hike controversy
6
Driver assaulted cyclist for questioning mobile phone use
7
Van Rysel to launch seven new bikes, including high-end race models
8
Cyclist hit by truck driver has compensation cut after judge says lack of helmet contributed to injuries