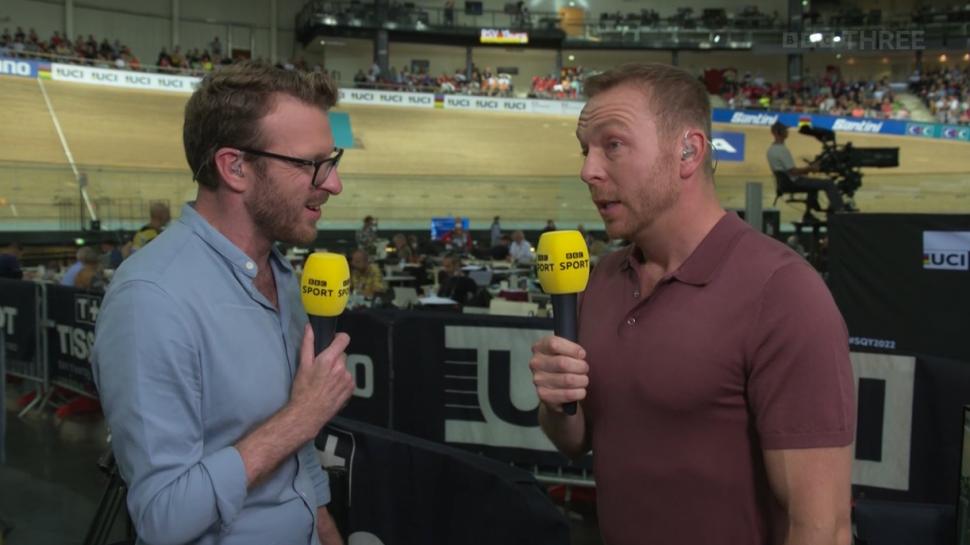 “If you want to make change, it’s better to be on the inside,” the six-time Olympic champion said
by Ryan Mallon

Speaking at this week’s world track championships in Saint-Quentin-en-Yvelines – where Great Britain’s Shell-branded riders secured a thrilling gold medal against Italy’s Filippo Ganna-powered Olympic champions in the men’s team pursuit – the sport’s most decorated track star claimed that while the deal was “controversial”, many of British Cycling’s staff and riders believe that it provides the governing body with the opportunity to “put cycling on the agenda” and give it “a voice” within the fossil fuels industry.

Earlier this week, the national governing body was accused of facilitating ‘greenwashing’ after announcing that it had agreed an eight-year sponsorship deal with the multinational oil and gas company.

According to British Cycling, the partnership with Shell – which, the governing body has clarified in recent days, is not equivalent to the ‘Lead Partner’ role formerly held by HSBC – “will see a shared commitment to supporting Great Britain’s cyclists and para-cyclists through the sharing of world-class innovation and expertise,” as well as “helping more – and wider groups of – people to ride, including ways to make cycling more accessible for disabled people.”

However, as road.cc’s sister website eBikeTips pointed out, a recent report has claimed that Shell, which insists it is committed to achieving net zero by 2050, had told employees in an internal communication from 2020 to never “imply, suggest, or leave it open for possible misinterpretation that [net zero] is a Shell goal or target.”

The partnership has prompted a fierce backlash from cyclists across the UK, many of whom have cancelled or threatened to cancel their British Cycling memberships in protest at what they believe is Shell’s attempt to ‘greenwash’ its environmentally damaging activities by investing in an activity associated with sustainable, healthy living.

While that particular accusation has already been aimed at pro team sponsors involved in the fossil fuels industry such as Ineos and TotalEnergies, as well as oil-rich states like Bahrain and the United Arab Emirates, Shell’s involvement with an organisation that not only purports to represent elite athletes, but also people who ride bikes across the country, has perhaps added even more fuel to the greenwashing fire.

In the wake of the announcement, one British Cycling member, a trained ride leader for the organisation’s Breeze women-only rides, said that the energy company “stands for everything we everyday cyclists don’t,” while another who has belonged to the organisation for more than a quarter of a century said that the sponsorship was “green washing for [Shell UK], plain and simple.”

Sir Chris Hoy on the claims of ‘greenwashing’ against British Cycling’s over its partnership with oil giant Shell ⬇️ https://t.co/5nbTH1GBjw pic.twitter.com/Wf0SQReBUp

However, despite the negative feedback from its membership, Sir Chris Hoy – who secured eleven rainbow jerseys for British Cycling during his illustrious career on the track – has claimed, that while the deal may have been “controversial”, most of the athletes at this week’s world track championships in Saint-Quentin-en-Yvelines believe that British Cycling’s partnership with Shell could help change the oil and gas giant’s policies from within.

“It’s not unfair to say that it was a controversial partnership to announce,” the six-time Olympic champion told BBC presenter and Invictus Games cycling medallist JJ Chalmers on Thursday.

“I think most people were quite surprised that a cycling federation aligned with a global corporation that’s in the oil industry. You wouldn’t think those two sit side-by-side.

“But, put yourself in British Cycling’s management’s position. They need to get a sponsor, they need to have a partner. In the current climate, trying to find a major sponsor for one year, let alone for eight years, is a significant challenge.”

Hoy, who is working at this week’s track worlds as a pundit, continued: “It will be interesting to speak to the management to see what they’ve got to say, but I guess a lot of the chatter in the track centre has been saying, well do you know what, if you want to make change, it’s actually better to be on the inside. To have a voice within the organisation, to try and make them hear your opinions and what you want to do for your sport.

“It’s not just about elite sport and the national team, it’s about representing the views of the entire membership and putting cycling on the agenda with a massive corporation like Shell.

“If you can get them to change their policy even slightly, then that’s a positive thing.”

The reaction to Hoy’s comments has been decidedly mixed, with some fans and journalists describing the retired sprinter’s comments as “very weak” and “naïve”.

Referencing some of the arguments used to defend last year’s takeover of Newcastle United Football Club by a consortium which includes Saudi Arabia’s Public Investment Fund, journalist Rob McGregor wrote on Twitter: “Is there a single instance of being ‘on the inside’ that has resulted in a sport, or a sports club, influencing the policy/actions of a [problematic] owner or sponsor?”

“‘We need to get a sponsor’ will the epitaph on this sport’s headstone,” said cycling writer Tom Owen.

“A lot of people [are] bitching about it, but who is coming up with an alternative?” Lowe asked, before claiming that “what cycling needs first is financial backing. You have to decide what you want from a governing body.

“I want a successful team and better cycling infrastructure, and not a lesson on morality.”

Meanwhile, British BMX rider Kieran Reilly echoed Hoy’s comments, telling BBC Sport that while he was “surprised” by the partnership with Shell, he was “excited to see what they bring”.

“If Shell partnered itself with a sport that wasn’t green there'd be a bigger reaction,” the European silver medallist said.

“Shell are taking a step in the right direction. I don’t think we will lose credibility as a sport.

“It’s Shell bettering themselves, cycling is helping Shell do that. There’s no argument for our sport being bad in that environment.”

Responding to this week’s widespread criticism of the deal – which manifested itself in an open letter signed by over 700 organisations and individuals calling on British Cycling to renounce the partnership – a Shell spokesperson said: “We agree that society needs to take urgent action on climate change. Shell has a clear target to become a net-zero emissions business by 2050.

“We are also deeply committed to the UK and are planning to invest between £20-25bn in the UK energy system over the next decade – more than 75 percent of this will be in low and zero-carbon products and services, including offshore wind, hydrogen and electric mobility.”