Many are ignoring lockdown rules by going to park “to meet friends” with some even “going for coffee afterwards," a road.cc reader has claimed...
by Simon_MacMichael

A cyclist who regularly rides in London’s Regent's Park has raised concerns about others there whom he says are riding in groups in defiance of coronavirus regulations, that except in very limited circumstances ban outdoor exercise with more than one other person. He has also told road.cc that he received abuse on several occasions when asking people to follow government rules.

British Cycling, in its COVID-19 guidance, encourages people to carry on cycling while keeping within the rules.

Meanwhile, Regent’s Park Cyclists, an action group comprising cycling clubs and organisations which has regularly emphasised through social media the need to ride responsibly and in accordance with the regulations, told road.cc that most people are riding alone or avoiding the park entirely due to the current situation.

In his email, which he signed off with the words “a concerned cyclist,” the road.cc reader told us: “For the past few weeks, as we've gone into a stricter and more intense lockdown, I have noticed, and been abused by, a great number of cyclists who do not appear to care for keeping safe or following the rules.”

He supplied several pictures showing cyclists apparently riding together in groups, and emphasised that unlike photographs that appeared in some national newspapers during last year’s initial lockdown, he had taken his with an iPhone, rather than a camera with a telephoto lens.

The reader told us he had seen “Large groups of cyclists, riding in close proximity against the advice of British Cycling, many of them coming to Regent’s Park to meet friends (and make no pretence otherwise).”

He said that some riders were “then going for coffee afterwards as though we're in 2018 – I happened to snap a group which did exactly that after Regent’s Park laps.” 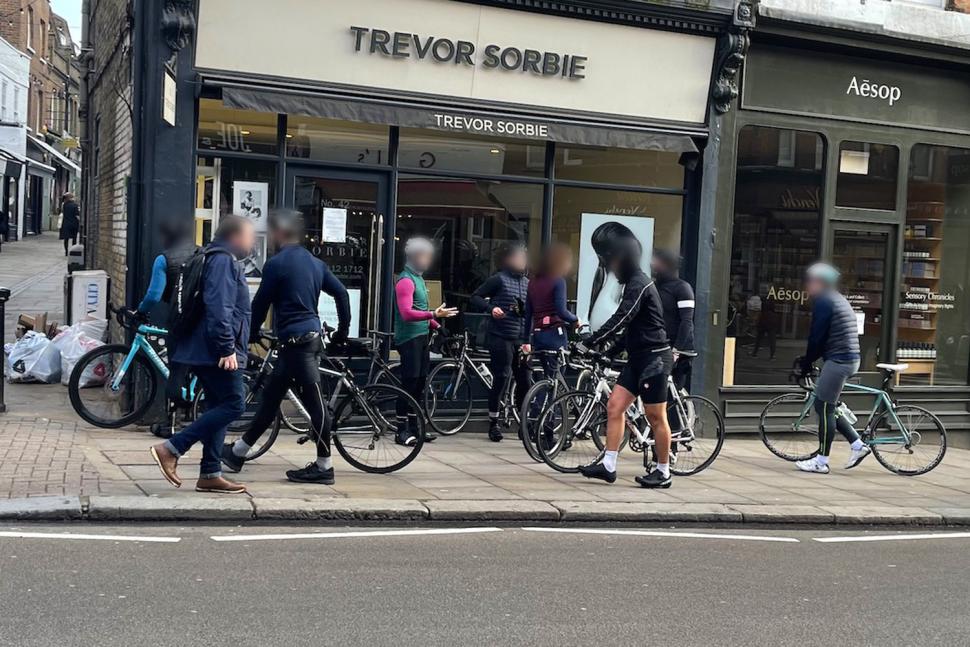 For example, the riders pictured above at the junction of Hampstead High Street and Flask Walk in Hampstead Village, where a number of cafes are open for takeaway, are clearly the same ones photographed earlier more than a mile away across the road from the park, with Primrose Hill in the background. 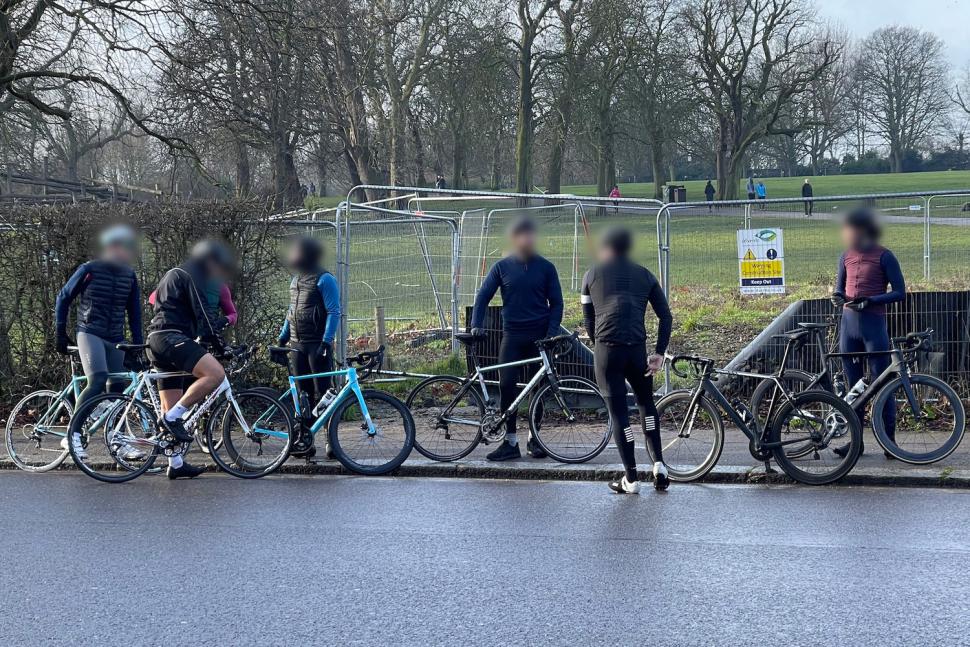 “Given the seriousness of the situation,” he said, “would it be worth reminding cyclists of our duty to protect each other and our families?

“We complain so often about other road users but if we don't follow the rules then (a) folks will paint all cyclists as ignorant MAMILs and (b) they may close our favourite cycling haunts.”

Detailing the abuse he has received at times when he has raised concerns with other riders, he said: “Possibly the most unsettling experience happened a couple of months ago when I was at Regent’s Park.

“I was passed by a cycling club (4-up, all in the same kit). I caught their slipstream for about 30 seconds and then one of the riders cleared their nose in my direction.

“After asking the rider to look before they do this, especially as it’s COVID, I was told, ‘don't go outside if you are scared of catching COVID’. Following up with the club email didn’t yield a much better response.

“I've found that the negativity and abuse tends to happen when I engage with a group of riders, suggesting that they may not be following the guidelines (by meeting in groups, etc), the risks to each other and how it looks to other road users.

“I did that a couple of times before I realised that (a) they know the guidance and (b) don't care. They generally communicate this through hand gestures and colourful language.

“As for people meeting up, it happens every day,” he continued. “My routine has me going to Regent’s Park between 7-8am, several times a week and from what I've seen, you can pretty much guarantee seeing groups of riders meeting up outside London Zoo or at the corner of St Andrews Place. Fridays and Saturdays are the worst, with many large groups meeting – my photos were from Saturday and yes, there were many groups ‘meeting up’.

“I hope I don't come across as petty,” he added. “I'm mostly sad and frustrated. It would be great if people could be reminded of the importance of keeping everyone safe – and that doesn’t mean staying at home.

“We can all still go cycling, we just need to pay a little more attention,” he concluded. 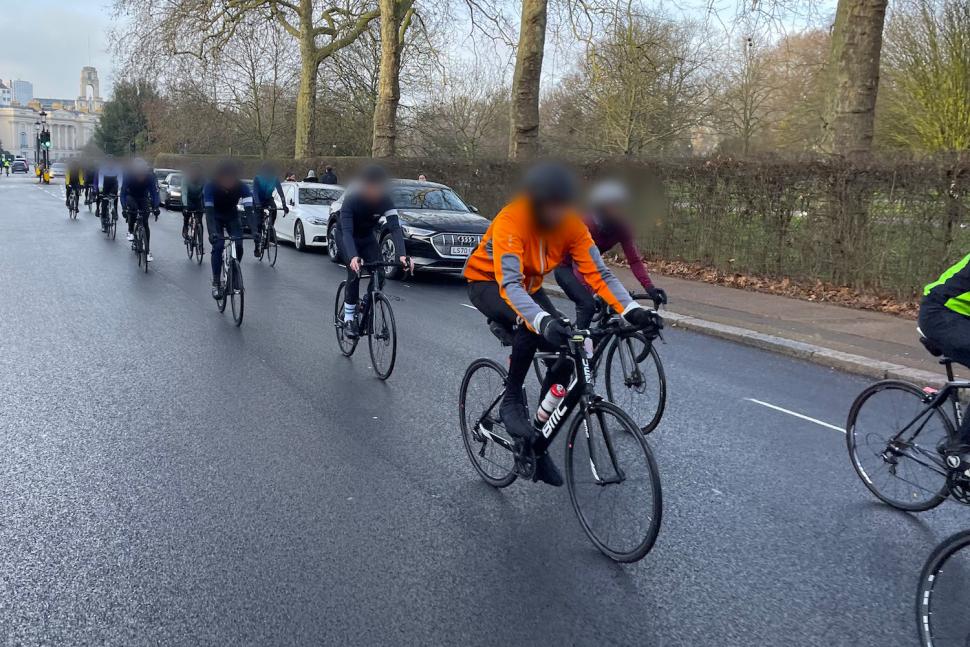 We flagged up the concerns highlighted by the reader to Justin McKie, chair of Regent’s Park Cyclists and also chair of The Regent's Park & Primrose Hill, Safer Parks Panel.

He told road.cc: “We have been very clear to our community about both the perception and health risks of groups forming when riding in the park.

“Broadly, the majority of club riders are riding sensibly on their own or avoiding the park all together – particularly when the weather is nice and the park is busy.

“It is sad to see that a minority don't seem to be too concerned about the perception or health risks that come with this behaviour.

“I am in regular touch with both The Royal Parks and The Parks Police, about how best to manage the situation and would like to see Car Parking suspended at weekends again, to reduce the over-crowding and dangers during lockdown.

“Of course, it’s not just cyclists that are bending the rules,” he added.

“With the first signs of snow, there were literally hundreds of people clustered together enjoying Primrose Hill at the weekend.

“All park users need to play their part during this difficult time.” 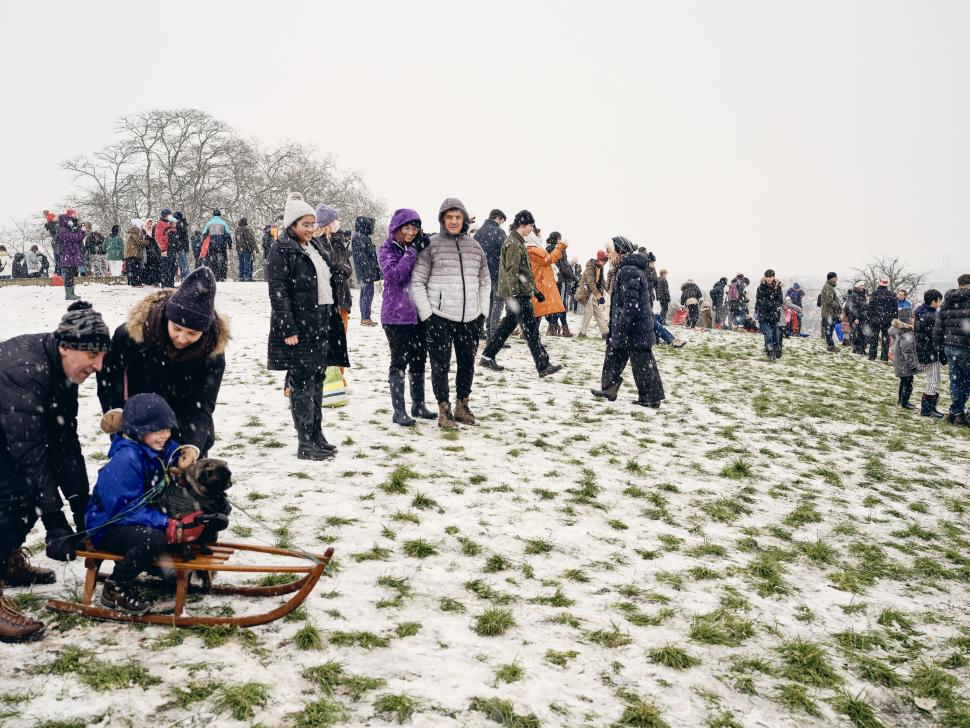