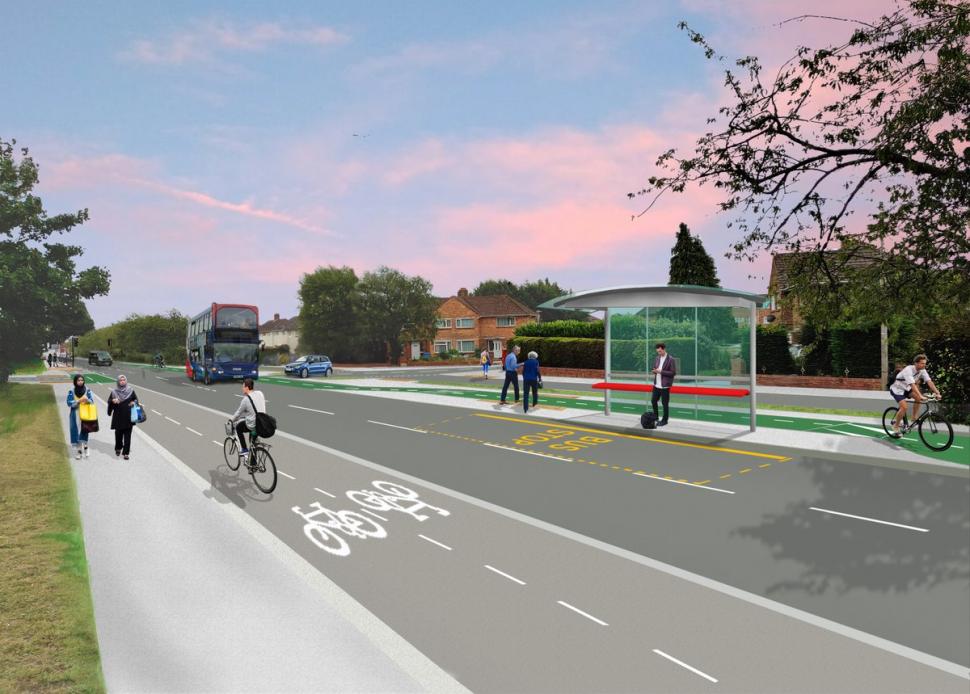 Row over Dorset cycle lane that drivers claim is “too wide”

Council chairman responds by saying that if drivers continue to cause crashes, they will have more roadspace taken away to make them slow down
by Simon_MacMichael

A row has broken out over cycle lanes in Poole, Dorset, with some motorists claiming incorrectly that people on bikes have more space than they do – although the local council’s chairman has said in response that if drivers keep causing crashes, roads will be narrowed further still to slow them down.

The cycle lanes on the A3049 Wallisdown Road have been built by the Conservative-controlled Bournemouth, Christchurch & Poole (BCP) Council as part of a £100 million plus initiative in partnership with Dorset Council to encourage more people to switch to active travel by giving them safe infrastructure.

But as happened earlier this year with a cycle lane in Wimborne dubbed “Britain’s biggest bike lane,” the width of the cycle lanes in Poole – nine and a half feet – has not gone down well with some drivers.

The Daily Echo says that “cyclists and walkers have a combined 33ft of room, while the carriageway for vehicles has been narrowed to just over 10ft per lane” – although another way of expressing that could be to say that cyclists and pedestrians each have less space than motorists do.

The newspaper quoted a man who works in a nearby office as being critical of the number of cyclists using the lanes.

The office worker said: “For something so wide there is far less bike traffic than you would expect. You just don't see the volume of cyclists it was designed for.

“The whole thing looks unsightly and a mess,” he insisted.

Another motorist who works at a nearby Territorial Army base said: “Several people have already driven out of the barracks and almost hit cyclists because they don’t realise it's a cycle lane as there is a lack of markings or signage.

“It's often in the evening when its dark and they're riding with barely any lights,” he continued.

“It gets very busy here with parents dropping off cadets, troops coming and going. It is extremely dangerous.

“There's a lack of attention and foresight for the whole plan,” he added.

BCP Council says, however, that there has been a 40 per cent increase in cycle traffic they opened, and campaigners point out that usage is expected to continue to grow.

“We are pleased to see the improvements are supported by our local walking and cycling forum,” a  spokesperson for the council said.

“Our most recent monitoring on this section of Wallisdown Road has already recorded an increase in cycling of almost 40 per cent on weekdays between September and October with a weekday average of 337 cyclists using the cycle lanes.

“The Wallisdown corridor improvements aim to improve safety and encourage more people to walk or cycle in the area.

“The carriageway will be between 6.4m and 6.6m wide, adhering to current national standards set by the Department for Transport for the provision of safer roads for walking and cycling whilst maintaining enough space for larger vehicles such as HGVs and buses.

“The cycle tracks are defined with sloping kerbs which will allow general vehicles to occasionally drive onto the cycle track and offer safe and quick passage of emergency vehicles.”

“Our region suffers from crippling traffic congestion. Bournemouth is the third most congested place in the UK, and 56th most congested in the world,” they added.

The council’s chairman, Nigel Hedges, said “If people keep having accidents, they are going to keep narrowing the roads so that motorists can't hurt anyone – these cycle lanes are keeping cyclists safe from the traffic.”

However, community group BH Active Travel has defended the £1million improvement scheme and believe the lane will be used more over time.

Marc Lohez, spokesperson for local campaign group BH Active Travel said: “There’s been a great deal of chatter about this one. Yes they may look wide, but the lanes are built to the new guidelines from the Department for Transport. It’s 100 per cent true that they are not being used to capacity – much like our roads 30 years ago.

“This is what a cycle lane should look like, not some token bit of paint and is designed to new guidelines in order to keep people safe – the number one reason why most don’t cycle more often.

“Correct width lanes can accommodate higher levels of users and also things like tricycles and adapted wheelchairs, more often than not consigned to riding the gutter line.

“The lane itself may appear empty because of several reasons. It takes time for people to change their habits being one, but the main being our network simply isn’t finished. Once connected at either end and beyond (such as Wallisdown) expect to see numbers greatly increase.

“Also with the new cycle to work limits being raised to include e-bikes this should help, as people see cycling as not only healthier and greener, but also a much cheaper way of getting about without having to be super fit.

“We’re not cyclists. We’re residents that walk, wheelchair and cycle. Our group is for active travel in any form, which includes cycling.

“Stating the former makes us sound like a solely pro-bike group, which instantly creates a divide,” he added.

Meanwhile, a resident of Christchurch has set up a petition urging BCP Council to build a proposed cycle lane on Barrack Road before a child is seriously injured or killed.

“I walked my children the length of Barrack Road daily for about six months taking them to the junior school and I saw an average of 50 to 100 children cycling the route in the space of 20 minutes,” they said.

“I feel certain if something isn’t done urgently to make this route safe a child will be killed or seriously injured in the not-too-distant future.

“The cycle lane is essential for the safety of all the children cycling to school, not to mention the hundreds of others that would use it if it were safe to do so, and should not only be built without delay, but built so that it is safe, and that means with a kerb barrier to stop cars and lorries driving into it – otherwise it will just be another death trap in a different colour.”

“I strongly believe the positives of a properly built cycle lane far outweigh any negatives and this includes increasing trade for local businesses.

“If there are properly signposted parking areas, there is no reason to think any businesses along Barrack Road will be adversely affected. I feel the benefits of safe cycle lanes on Barrack Road are a win-win for everyone.