Subscribe
Back to news
news
Campaigning
Sportives and organised rides 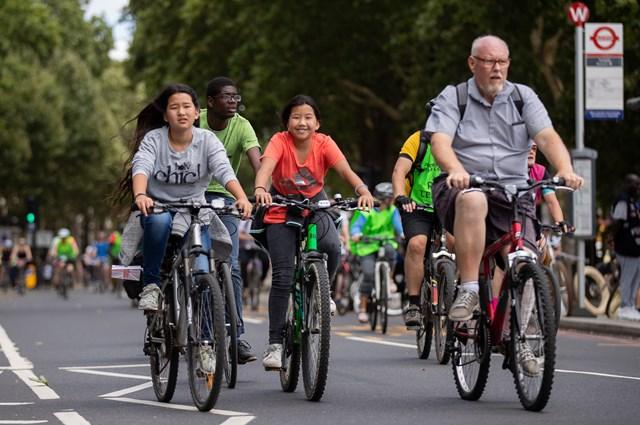 RideLondon: Essex urged to focus on road safety ahead of revamped sportive

Predicted increase in Essex cycling could be a positive legacy for county as it prepares to host the UK's biggest sportive, but cyclists say safety work needed...
by Laura Laker

Essex highways authorities and police have been urged to tackle road safety as part of RideLondon’s legacy, following news the mass sportive and pro cycling events will visit the county’s roads next year.

The UK’s biggest sportive, RideLondon will for the first time partner with Essex County Council, hosting the 100 mile sportive on Sunday 29 May 2022, and two days of a new three day UCI women's WorldTour race. While the events themselves will take place on closed roads, they are expected to attract leisure riders before and after the events, who will have to share some of the most dangerous roads in the country with drivers.

Essex has among the highest number of road crashes in the country, with one of the smallest national decreases in collisions last year, when lockdowns cut road traffic dramatically. Local cyclists say attitudes and driving standards have worsened since the pandemic and Cycling UK has urged police to promote Highway Code changes, when they come into effect next year, including around minimum safe overtaking distances.

Nick Boyle, Chelmer Cycling Club Chairman, said he is looking forward to the Ride London event, and hopes to participate next year. However, he adds: “The biggest problem facing Essex is similar to other counties, whereby driver impatience, aggressiveness, lack of understanding around cyclists has gotten worse since lockdown finished.

“The roads are more congested now as people avoid public transport as much as possible, but driving standards have equally suffered. Generally most club rides where we ride in a compact 2x2 formation will always get more than one angry driver tooting their horn or swearing.”

Yes it’s the only county that I’ve been to where I was called a c**t from drivers shouting from traffic on the opposite carriageway.

Essex roads have the second highest number of collisions of any UK county, with 3,903 road casualties in 2020 - which the local road safety partnership attributes to high traffic levels. Across Essex Police force last year four cyclists were killed, 93 seriously injured and 227 slightly injured.

Despite lockdowns in 2020 dramatically reducing road traffic, Essex collisions decreased by just 14.3% compared with 2019. This was the fourth lowest decrease of 42 UK police forces - and partly attributed to a significant increase in law-breaking drivers speeding on quieter roads. Neighbouring Suffolk saw a 34% drop in road casualties last year by comparison, and Hertfordshire 31%.

Cycling UK says police need to promote new Highway Code guidance being introduced next year, including 1.5m minimum passing distances when overtaking cyclists, and a ‘hierarchy of responsibility’ in which those in charge of faster, larger vehicles have greater responsibility for keeping others safe.

Keir Gallagher, Cycling UK’s campaigns manager said: “With more people likely to take to Essex roads in preparation for RideLondon, it will be important for Essex Police to communicate and enforce these changes. The introduction of the new hierarchy of responsibility means there will need to be a step change in attitudes on how we all use our roads, with a focus on looking out for the most vulnerable.”

“Cycling UK would also encourage the council to think about the legacy of RideLondon. With all eyes on Glasgow and COP26 at the moment and the urgent need to cut transport emissions, cycling presents a simple solution to our car dependence for short local journeys. We’d hope the council will use the inspiration of RideLondon to build more joined up networks of safe cycling routes and use the bicycle to fight climate change.”

Generally driving standard is ok. Infrastructure is ALL based around the large towns (Harlow, Chelmsford, Colchester) with nothing connected. Good luck if they want to pass through Epping forest. (Google map Epping New road to see what passes as a cycle lane there)

“There has definitely been an increase of cyclists in the area over the past few months, both male and female. I think the recent Women's Tour, which had a few stages going through the local roads has inspired and contributed to that as well.”

However, she adds potholes and driver attitudes remain a problem. “Sadly many drivers still don't understand that it is legal for cyclists to ride two abreast on wider roads, same goes for cycle paths which we are not actually obliged to use as per The Highway Code.”

Essex police, like many UK forces, accepts third party camera footage submitted by the public. Cycling UK’s local group says in July cyclists made 103 reports to the Essex Police Extra Eyes third party reporting team, of which 96 were for close passes. Of these reports 58 (60%) resulted in no further action while 37 (38%) resulted in a notice of intended prosecution being issued. In two cases (2%) an advice letter was issued.

By contrast, according to Detective Chief Superintendent Andy Cox, the UK police lead on road collision investigation, “about two thirds” of video submissions nationally “end up in some sort of enforcement action”.

Cycling UK says there appears to be no clear standard among Essex police what constitutes a close pass, adding it hopes new clearer guidance in the Highway Code will help.

My Kent club does an annual 100 mile ride in Essex (and this year we took a group up to Ride Essex). Always loved it - great rolling countryside, pretty villages and generally good roads (though after Kent's potholes anything else looks good)

RideLondon organisers pointed out the event itself is on closed roads and it is for Essex council, and local police, to tackle road safety. Essex Police did not respond to requests to comment.

Generally I find Essex roads poor quality compared to Surrey. Drivers wise, bad experiences in both, but it feels Essex is worse in that regard too. Great to see RideLondon back on though

Entries for RideLondon open on Wednesday 10 November. The first 10,000 places will be available on a first-come, first served basis. Entry is £89.