Full Kit Ranker quarter finals: your chance to vote for the greatest cycling jersey of all time

Some absolute classics were knocked out of our initial 16-jersey shortlist... which four will make it through to the semi-finals? Be sure to cast your votes so your fave has the best possible chance of winning!
by Jack Sexty

*POLLS FOR THE QUARTER FINALS ARE NOW CLOSED... SEE YOU IN THE SEMI-FINALS!*

In our quest to crown the greatest cycling jersey there ever was, we've already seen some absolute classics knocked out in our first round of 16... and now it's time for the Full Kit Ranker to hot things up a little in the quarter finals!

If you were forced to make some excruciating decisions in round 1, just wait to see how cruel the draw has been for the quarter finals. It may be the case that your two favourites are going head-to-head, but that's the brutal way this cookie (and the Full Kit Ranker) crumbles unfortunately. As you did in round 1, reacquaint yourselves with the classic jerseys in each of the four match-ups before making your decision, then vote in each poll. Voting closes at midnight on Tuesday, after which we'll gather the final scores then the semi-finals will commence on Wednesday.

Right then, let's get voting and see you in the semi-finals! 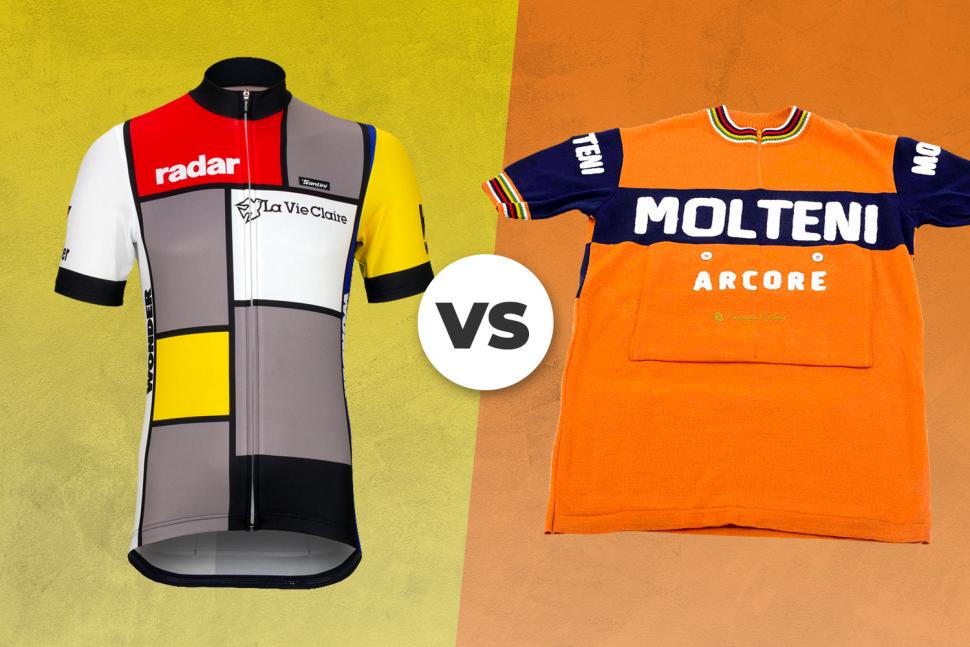 The Piet Mondrian-influenced classic worn by Bernard Hinault during his 1985 Tour-winning year was a clear victor over Team Sky's 2012 top from Adidas, picking up 77% of the vote. In perhaps our toughest contest of the four, the La Vie Claire jersey from 1985 is up against the jersey arguably most associated with Eddy Merckx, the Molteni strip in which he dominated the Tour de France and Giro D'Italia in the early 70's. Have a think, choose carefully...

Poll not showing above? You're probably on the AMP page. Click here!

You can buy a La Vie Claire replica jersey here, and a Molteni replica here

Faema's classic number - another Merckx dominated in - beat Euskaltel-Euskadi's 2004 bright orange jersey by 65% to 35% in our first round, while the contest between Mapei-GB and Brooklyn was far closer with Mapei creeping over the line with 54%. Are you all about super vintage wool classics, or do you prefer slightly more recent retro and have clearer memories of Mapei's domination in the 90's? It's decision time... Our oldest and newest jersey match-up between Bianchi and EF Pro Cycling saw the vintage prevail with 58% of the vote, while all the bad associated with US Postal's strip didn't prevent it from just edging Jelly Belly Pool Gel with 53% of the vote to 47% for Jelly Belly. Fausto Coppi and vintage Bianchi, or Lance at the height of his (chemically enhanced) powers? Time to make your mind up...

You can buy a Bianchi-Pirelli replica here, and there are various genuine US Postal jerseys still available on eBay. Peugeot triumphed over Canyon-SRAM's Rapha-made jersey convincingly in round 1 with 67% of the vote, while Z-Tommaso edged Renault-Elf with 57% to 43%. Another decision that may be excruciating for classic jersey fans, the Peugeot-Shell-Michelin kit worn by Robert Millar, Stephen Roche and Sean Yates versus Greg LeMond's striking Z-Tommaso jersey is a match-up we predict will be a super close call.

You can buy a Peugot-BP Michelin (70's styley) replica here, and a Z-Tommaso replica here. You can still find some original Peugeot-Shell-Michelin jerseys on eBay.

As with the first round, make sure you cast votes for all four match-ups and discuss with your fellow Full Kit Rankers. Feel free to share your favourite jerseys that missed our initial shortlist in the comments too... we might even have enough for another tournament!

P.s. cheers to the Full-Kit W*nkers page for inspiring the name of this epic contest - part of Twitter folklore.