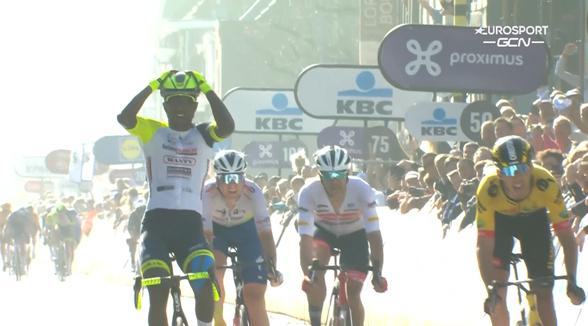 It’s been quite the six months for Biniam Girmay. After signing for WorldTour outfit Intermarché-Wanty-Gobert Matériaux mid-way through 2021, the Eritrean rider took a first pro win at the Classic Grand Besançon Doubs ahead of the likes of Thibaut Pinot and Nairo Quintana, won silver at the U23 world championships road race, and kicked off 2022 with an early season win at the Trofeo Alcúdia in Mallorca.

But the 21-year-old cemented his status as a future – and current – star of the sport today with a superb victory at Gent-Wevelgem, the first ever African triumph at a prestigious Belgian classic.

Girmay, who was a constant attacking presence on the way to fifth place at the E3 Saxo Bank Classic two days ago (despite claiming to have never ridden on the Flemish bergs before), proved on the run-in to Wevelgem that he has the tactical guile to add to his undoubtedly fast finish.

After a dangerous looking move, initiated by Wout van Aert on the final ascent of the iconic cobbled Kemmelberg, was reeled in with just under 30 kilometres remaining, Girmay infiltrated a strong group of four on the long flat section towards the finish, along with Jasper Stuyven, Dries Van Gestel and van Aert’s in-form Jumbo-Visma teammate Christophe Laporte.

Despite the chasing peloton, which included noted fastmen such as Arnaud Demare, Mads Pedersen and Tim Merlier, edging ever closer in the closing kilometres, the lead quartet had built enough of an advantage to contest the finish.

While Laporte was left to flounder on the front for most the final kilometre, Girmay waited patiently at the back of the group, before unleashing a long, powerful sprint which, despite the Frenchman’s best efforts in the dying metres, was enough for a historic and popular victory.

When Eritrean Superstar, @GrmayeBiniam launched his sprint, there was no coming back for the rest of the escapees.

What a great day for the sport of cycling.#GWE22 pic.twitter.com/rR9DssHm7O

“It's unbelievable, amazing. I cannot expect this," Girmay said after the race.

“We just changed my plan a few days ago on Friday [following his performance at E3]. We just came for a good result. This race is amazing. Unbelievable.

“I lost many places, especially on the first section and on the first cobblestones. I felt a bit uncomfortable. But after I felt better and better, rode smart, followed. Then in the end you know everybody is waiting for Van Aert so I played it a bit easy,” he said.

“Of course I feel much better, but also there's really strong guys with me so I'm a bit afraid. But when I went to the back [of the group] I felt confident, especially entering the last 250 metres. I was confident, but it’s unbelievable, yeah.”

A DAY WE WILL REMEMBER FOREVER

When asked what his victory will mean for African and Eritrean cycling, the 21-year-old said: “Of course, it will change things first for me. And it will change a lot in the future, especially for all African riders.”

Girmay follows in the wheel tracks of fellow Eritreans Daniel Teklehaimanot, who wore the King of the Mountains jersey at the 2015 Tour de France, and EF Education-EasyPost’s Merhawi Kudus.

But today’s win – a first for Eritrea and Africa in such a renowned, 250 kilometre-plus classic – represents a historic moment in what remains a predominantly white, Euro-centric sport.

Those hoping Girmay will make further history at next weekend’s Tour of Flanders will be disappointed, however, as cycling’s newest superstar said that he will return home after today’s race to visit his wife and daughter, who he has not seen for three months.

But judging by his riding on the Belgian cobbles this spring, there are plenty of chapters still to be written in Biniam Girmay’s - and African cycling's - story over the next few years.