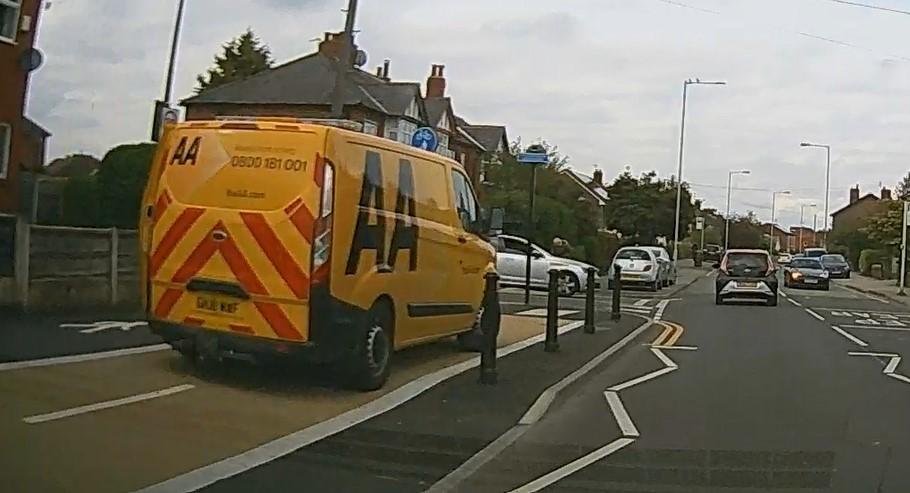 "It is a criminal offence to park on a cycle lane bordered by a solid white line"...
by Will Bolton

The president of the AA said it 'doesn't look great' after one of his company's vans was pictured parked in a cycle lane.

Edmund King OBE, was responding to an image posted on social media of the vehicle parked in a cycle path in Cheadle Hume, Stockport.

Twitter user, Andy Brown spotted the van and posted an image asking the AA what was going on.

It read: "We can see the side door on the van is open, so it looks as though the Patrol is attending a breakdown at one of the houses.

"Our Patrols will assess the situation to find the safest place to park, for them and other road users."

However, numerous people pointed out the van, which has since been moved, was illegally parked and there was no reason whatsoever that would justify it being in a protected cycle lane.

One person commented: "This isn't up to the discretion of your employee, it is a criminal offence to park on a cycle lane bordered by a solid white line.

"Does the AA endorse criminal behaviour?"

Eventually, the AA president got involved, and said: "Fairly difficult for me to comment when I don’t know the circumstances so we are investigating.

"But obviously it doesn’t look great to stop in a cycle lane but let’s find out."

Fairly difficult for me to comment when I don’t know the circumstances so we are investigating. But obviously it doesn’t look great to stop in a cycle lane but let’s find out. #thinkbikes

Again, this was deemed inappropriate by large numbers of people.

One man wrote: "You could say it is completely wrong to park in a cycle lane, rather than it not 'looking great'.

"Makes it sound like you’re more worried about the perception than actual safety, and the law."

Mr King later responded to another comment asking if he was going to do anything about the incident.

He replied: "I am, thanks", alongside an image of cycling safety stickers.

He later said he was waiting for the full facts to emerge, and added: "I would rather base [my] comments on facts but obviously accept that it is generally wrong to stop in a cycle lane."