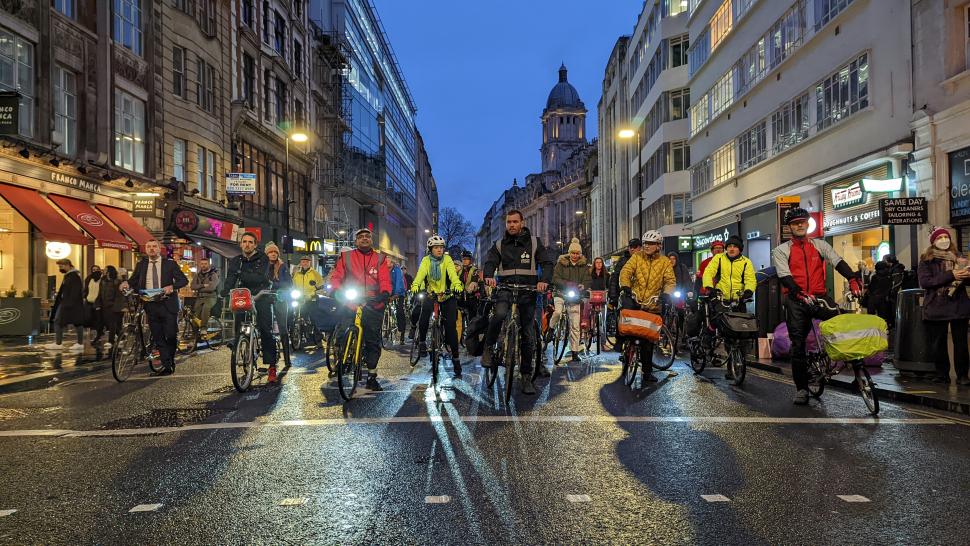 Mayor of London Sadiq Khan has admitted that the current short-term funding provided by the government to Transport for London (TfL) means it is “extremely difficult” to deliver plans to fully overhaul the notorious Holborn Gyratory system in central London to make it safer for cyclists.

He was responding to a question asked in January by Liberal Democrat Assembly Member Caroline Pidgeon, who chairs the Transport Committee at City Hall, and who in October accepted a 7,500-signature petition to deliver to the Mayor from London Cycling Campaign (LCC) calling on the gyratory system and other dangerous junctions in the capital to be made safer for cyclists.

The petition was delivered to her by LCC campaigns manager Simon Munk at the junction of Theobald’s Road and Southampton Row where paediatrician Dr Dr Marta Krawiec was killed last August while cycling to work.

In her question to the Mayor, Pidgeon asked: “What specific actions have been taken by (a) TfL and (b) Camden Council in relation to making Holborn Gyratory safe for cyclists during the month of January?”

The Mayor said: “Works to implement cycling safety improvements at the Southampton Row/Theobald’s Road junction have continued to progress well.

“During January 2022, the work outlined in my previous answer to Mayor’s Question 2022/0280 to develop detailed designs and temporary traffic management plans was completed,” he continued.

“Construction began on site and included the removal of traffic signals (to be replaced), excavation works and the start of works on a pavement build-out for a relocated bus stop.

“TfL and Camden Council have worked together to implement temporary traffic signals, in a manner which minimises disruption and maintains safety during the construction period.”

Khan’s reply came on 23 March – but in the intervening time yet another cyclist, former corporate lawyer Shatha Ali, was killed elsewhere on the same gyratory system, the eighth such fatality in the area since 2008, with large vehicles such as coaches and lorries involved in each death.

Subsequently, LCC held the latest in a series of vigils at Holborn, once again calling for safer roads, and attended by hundreds of cyclists.

Referring to the latest death of a cyclist there, the Mayor added: “Following yet another tragic death at the Holborn Gyratory on Tuesday 2nd March, TfL are working hard with Camden Council to try and restart the wider project to make all parts of the gyratory safer, but the ongoing short term funding deals from the Government make planning and delivering complex schemes such as this extremely difficult.”