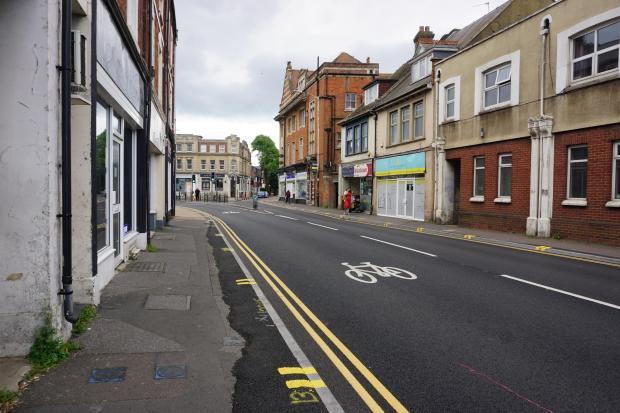 The markings, which aim to encourage cyclists to take a “prominent position” while riding through Bournemouth, were described by the paper as the “latest move by the authorities to drive cars off the road”
by Ryan Mallon

A simple lick of paint on the roads through Boscombe, a suburb of Bournemouth, has prompted something of a meltdown in the national press, with the Mail, Telegraph and Metro publishing articles devoted to the new bike markings, which the MailOnline has described as “the latest move by the authorities to drive cars off the road”.

As we reported on the live blog yesterday, bicycle symbols have been painted in the middle of lanes in Boscombe as part of recent resurfacing works carried out by Bournemouth, Christchurch and Poole (BCP) Council.

The council says that the new road markings on the A35 Christchurch Road and between Browning Avenue and the Christchurch Road roundabout were added to encourage cyclists to take a “prominent” position on the road.

“We recently undertook carriageway resurfacing in Christchurch Road at Boscombe and we have widened the cycle lanes in line with current standards and made them mandatory where possible,” a council spokesperson told the Daily Echo.

“The road markings highlighted are there to encourage cyclists to take a prominent position in the lane so therefore make them more visible to other motorists.

“These have been added where the existing width of the carriageway between constrictions is between 3.2m-3.9m.”

Bike symbols in the middle of shared use lanes, as transport journalist Carlton Reid pointed out on Twitter earlier today, are not a new phenomena in the United Kingdom, and have been in use since 1975.

They were soon adopted in the United States, Canada, New Zealand and Australia, where they evolved into the much-maligned 'sharrows’ (or shared arrows), a source of both confusion and frustration for cyclists in those countries.

However, the installation of a decades-old road marking in Bournemouth has resulted in both the MailOnline and Daily Telegraph penning articles claiming that the symbols encourage cyclists to “ignore” the town’s dedicated bike lane.

While legally there is no obligation for bike riders to use cycle lanes where they are provided, the Telegraph quoted readers who claim that the new markings have “made the bike lane redundant while making cyclists think ‘they own the road’.”

The MailOnline wrote that “cyclists are being encouraged by council officials to ignore a dedicated cycle path and use a busy main road instead in an attempt to force traffic in the town centre to slow down.

“Although cyclists have the use of the 7ft wide bike lane alongside the A35 in Bournemouth, Dorset, large bike symbols have been painted on the main road as well.”

While the Mail and Telegraph both note that cyclists can avail of a “seven-foot-wide bike path”, the Mail’s own article includes a statement from BCP Council which disproves this claim.

“As part of our works to improve the A35 Christchurch Road, we’ve taken steps to make the route safer for all road users and support more sustainable travel through the area,” the council spokesperson said.

“The original cycle lane markings were typically 1.5m, with some as little as 1.1 metres in width, which is below current national standards and allowed for close passing of vehicles. They were also frequently being parked on by motorists.

“To address these issues and improve safety, we have adjusted the cycle lanes to 2m in width in most areas. There is a very short section of 1.5m wide lane and some lengths of 1.7m wide. We’ve also made them mandatory where possible to prevent vehicles parking and to create a safer space for people cycling.

“At pinch points along the road, we have added painted signs on the centre of the carriageway to alert motorists that cyclists are likely to be using the main carriageway at these points.

“This will give people living and travelling through the area more confidence to get out about on their bikes, travel sustainable on this important route and leave their cars at home.”

Despite the glaring inaccuracies in their report, the Mail described the markings as the “latest move by the authorities to drive cars off the road” and included in their headline the question: “Is there any room left for cars?” 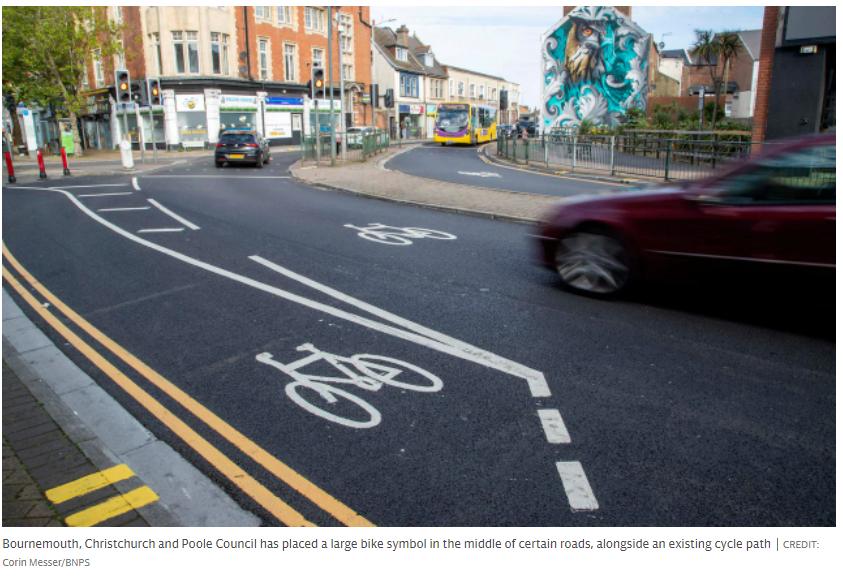 Both the Mail and Telegraph reports include photographs of the symbols, with the Telegraph (above) including the caption: “Bournemouth, Christchurch and Poole Council has placed a large bike symbol in the middle of certain roads, alongside an existing cycle path”.

However, the cycle path in question is shown in the photo to be little more than a short and relatively narrow stretch, segregated from traffic only by paint on the road, and fails to even cover the width of the image.

Nevertheless, the ‘story’ has also been covered by GB News and notorious anti-cycling TalkTV presenter Mike Graham, who branded the council’s decision as “literally madness”.

There's been lots of weird, culture-war frothing about this non-story from Bournemouth. "Why large bicycle symbols have been painted on BCP roads." pic.twitter.com/LdlbI0VQSs

Carlton Reid has described the rather zealous reaction to some new paint on the roads as “lots of weird, culture-war frothing about this non-story”.

The journalist pointed out that, despite the Mail’s belief that the symbols would lead to cyclists taking over the roads, “painting a bike symbol on a road probably does diddly-squat for road safety.”

This latest bike lane-related media meltdown isn’t the first time that the Mail has taken aim at cycling infrastructure in Bournemouth.

> 10 of the most hysterical anti-cycling Daily Mail headlines

In January, the newspaper published a story titled: “Motorists' fury as cyclists IGNORE £150m cycle lane scheme in Bournemouth and pedal along the road – forcing drivers into oncoming traffic.”

The headline was soon corrected to clarify that the segregated bike lane on the A347 Whitelegg Way (perhaps the seven-foot-wide path purported to be in Boscombe, over four miles away?) did not in fact cost £150 million, but rather £1.12 million.

Sure, what’s almost £148.9 million between friends?