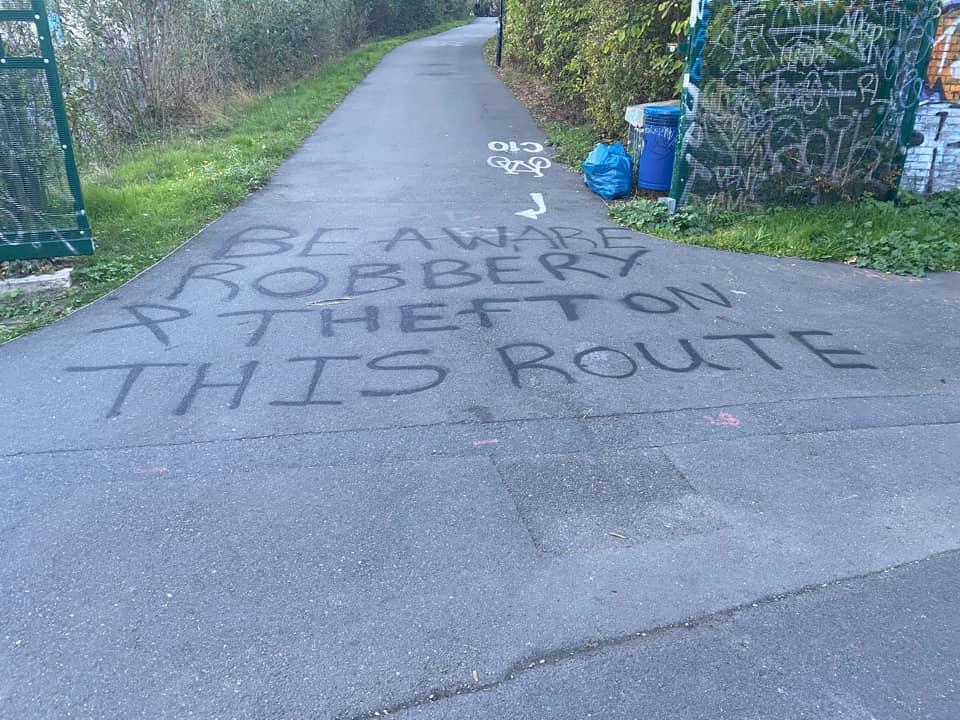 A warning has been painted on the entrance to a section of Cycleway 10 in south east London, following concerns over the path’s safety
by Ryan Mallon

Graffiti telling cyclists to beware of bike thieves has been daubed on the entrance to a section of a south east London cycle route following reports of robberies and muggings by “masked men” in recent months. Local cyclist Euan told road.cc that he has “stopped cycling into work entirely” due to fears that he will be targeted by muggers.

“This used to be my only safe route into work, but I’ve seen men in balaclavas watching cyclists on the route on multiple occasions and I simply don’t think it’s safe,” he says.

“I’ve heard about this happening via multiple sources for months and the police absolutely can’t be bothered.”

> Cyclist stabbed multiple times by gang who stole his bike

A number of other cyclists have also reported their experiences on the cycle route on social media. A month ago, a Reddit user claimed that at around 5.45pm on a weekday evening a group of men standing at the corner of Surrey Canal Road and Senegal Way could be heard discussing whether they “should get that one”.

“Wasn't sure if they were intending to mug but it made me uneasy… and there seems to be targeting going on in the area. Will be changing my route in evenings,” the user said.

Last month, a member of the Lewisham Cyclists Facebook group reported that a female cyclist was attacked and had her bike stolen by “two men in balaclavas” in the same area. The same user also claimed earlier this week that their neighbour was attacked by the muggers, and now no longer cycles due to fears for her safety and is “moving to somewhere she can take the tube to work”.

“I was pushed off my bike and robbed by boys in masks a couple of years ago near that route,” another female cyclist said.

Local police have contacted the Lewisham Cyclists group to inform them that they are aware of several incidents involving bikejackings on C10 and say they are adding the route to their patrol paths.

Violent bike thefts have become a worryingly common occurrence over the past year. In July, British Cycling said it was "deeply concerned" by the rise in bikejackings across south London, with policy manager Nick Chamberlin publishing a response to outline the issue, telling members what British Cycling is doing and offering advice.

Chamberlin said: “We have heard from lots of clubs and individuals who are rightly very concerned about going out for a ride. It is extremely hard to discuss these sorts of issues without causing panic and the last thing any of us would wish is to deter people from cycling this summer through a fear of being attacked.

“The sad reality however is that when these spikes in violent crime occur, and while we try to understand the pattern of incidents better, it is prudent for individuals, clubs and groups to discuss these concerns together and think carefully about the rides they have planned.

“As with the incidents that occurred in Richmond Park last year, we know that by working together as a cycling community to quickly pass relevant information to the police we can support them to quickly and effectively tackle the issue.”

With the rise in incidents showing few signs of abating, British Cycling has advised that members in affected areas should plan rides and events carefully, be mindful of privacy settings on devices and contact its incident helpline as well as the police to report incidents and/or threatening behaviour.