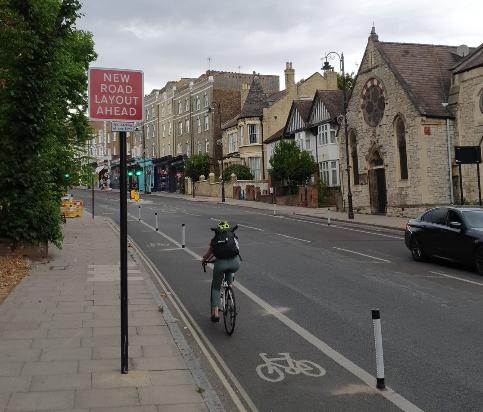 “We might lose some business, but we will be able to save more lives,” said one local trader
by Ryan Mallon

A Camden councillor says that recently installed protected bike lanes in the borough will benefit both businesses and local cyclists.

The new segregated cycle lanes, which run for just over a kilometre on Haverstock Hill and Rosslyn Hill between the junction with Prince of Wales Road and Pond Street, were installed this summer as part of an 18-month trial.

The experimental traffic order was passed by Camden Council in August last year, despite a group of Conservative councillors opposing the plans because the road in question (which has an average gradient of three percent, with a slight nudge up to five percent on a section of Haverstock Hill) was deemed “too steep” for many cyclists to use, including schoolchildren.

In fact, four local schools, as well as the Royal Free Hospital and Great Ormond Street Hospital, backed the scheme, which passed through the Labour-dominated council’s culture and environment committee with a majority of five to one.

Despite the strong support for the pop-up trial, the recently-installed bike lanes have encountered a mixed reception from local business owners.

In interviews conducted this week by the Hampstead and Highgate Express, a handful of local traders criticised the lanes, which they believed made it impossible for customers “to park in the entire area where the lane is built”.

Café owner George told the newspaper: “[The trial has] affected our business very badly due to the lack of parking facilities.

“The customers are not coming as they used to. They don’t have the space to park now, and they have plenty of other options as well.”

However, not all business owners are opposed to the lanes.

“Being myself a cyclist, I completely support the cycle lane,” says juice bar owner Didi.

“We might lose some business, but we will be able to save more lives. It will make cycling safer in London.”

Didi’s view was echoed by a number of local cyclists.

“The more cycle lanes there are, the better,” said 55-year-old Paul, while teenager Leo argued that the scheme “make a big difference. It makes cycling safer. Most of the drivers in London overtake and cut the space of cyclists which makes it super difficult for the cyclists to manoeuvre around the cars in the traffic.”

Councillor Adam Harrison, cabinet member for a sustainable Camden, says that the pop-up cycle lanes will result in benefits for cyclists and business owners alike.

“The five new pedestrian crossings and cycle lanes being trialled on Haverstock Hill and Rosslyn Hill are absolutely vital for helping people travel more safely around Camden, whether it’s switching from car to bike for some journeys or walking to the shops and restaurants of Belsize Park and Steele’s Village," he said.

“As well as contributing to our vision of zero casualties on our roads, they are part of our collective effort to cut the carbon out of transport, and slash air pollution on our way to World Health Organization standards.

“I understand this means some changes to the area, but I believe businesses, residents, visitors and local stakeholders will find it a real benefit. I am also pleased that four local schools, the Royal Free Hospital, and Great Ormond Street Hospital backed the new walking and cycling changes.

“The trial scheme is now substantially complete with remaining elements, such as the zebra crossing at the northern end being completed this month. We will welcome feedback from businesses and all other stakeholders, throughout the trial, ahead of a final decision on whether or not to retain, amend or remove the trial scheme.”