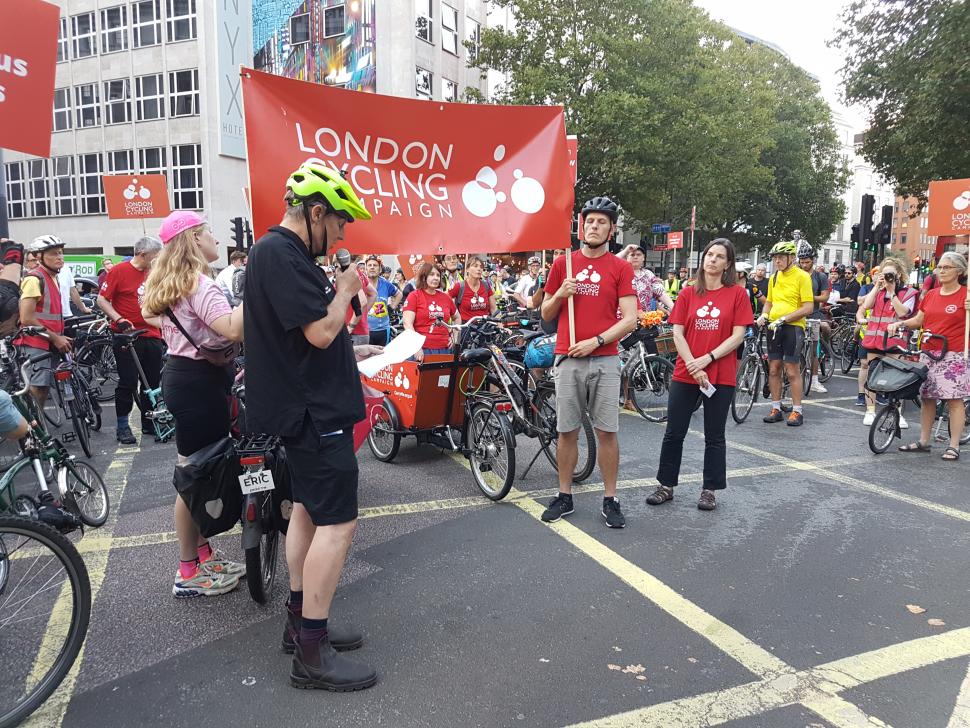 Hundreds gathered near Holborn to demand action
by Laura Laker

Hundreds of protesters gathered at one of London’s most dangerous junctions yesterday calling for action on the city’s worst intersections, following the death of a cyclist last month.

Dr Marta Krawiec, a consultant paediatrician, was killed after a collision with a lorry while cycling at the junction of Southampton Row and Theobalds Road, near Holborn station on 4 August. She was the seventh person killed at Holborn since 2008, and campaigners from the London Cycling Campaign (LCC) say progress on improving "horror junctions" like it must accelerate.

A £12.5m scheme to improve the junction was suspended last year due to lack of funds, but Transport for London and Camden Council say improving the Southampton Row and Theobalds Road junction is now a priority.

Simon Munk, London Cycling Campaign’s head of campaigns, said successive mayors have failed in their pledges to tackle London’s most dangerous junctions. He said: “I think political will is a massive part of this. When you start saying to people, ‘we're going to add 30 seconds to bus journeys’ [to make junctions safer], when you start saying to boroughs ‘drivers are going to kick back [against changes]’, then, you know, it gets quite shirty quite quickly. And there's not a lot of politicians in London who seem to have the guts to really stand up to that.”

LCC campaigner, Clare Rogers, read out the names of all seven people killed at Holborn since 2008, followed by a minute’s silence.

Great Ormond Street doctor, Mark Hayden, called London’s streets “unnecessarily dangerous” for cycling, and urged action for safer roads, saying anyone who takes it up, including many NHS staff avoiding public transport during the pandemic, makes a “conscious decision to risk death or injury”.

Renata Guimaraes, a facilities manager who cycles ten miles to work from North West London to the city centre, said at the protest: “I cycle in London all the time, and I need it to be safer when I’m cycling to work. Especially in recent years it’s getting quite aggressive”.

Anna Williams, who took up cycling during the pandemic, said: “I’ve taken up cycling in the last year and a half, and it just feels a bit unsafe cycling around London.” “Not that long ago a motorist knocked my bicycle wheel instead of waiting for me to move out of the way. I reported it to the police and nothing happened.”

Will Norman, London’s Walking & Cycling Commissioner said: “My thoughts remain with the family, friends and colleagues of Dr Marta Krawiec after her tragic death last month. I know both the Mayor and TfL are utterly committed to doing everything possible to achieving our Vision Zero goal of eliminating death and serious injuries from London’s streets by 2041.

“Following on from previous safety measures introduced in this area, we had been working with TfL and Camden Council on plans to further improve safety– including new walking and cycling facilities to reduce road danger and measures to reduce traffic dominance and pollution. Unfortunately, due to the pandemic’s severe impact on TfL’s finances and the lack of a long-term funding agreement for TfL, implementation of these plans has been delayed. We are now urgently working to support Camden to deliver short-term measures to reduce road danger in Holborn, as well as investigating longer term proposals to improve cycling safety in the area.”