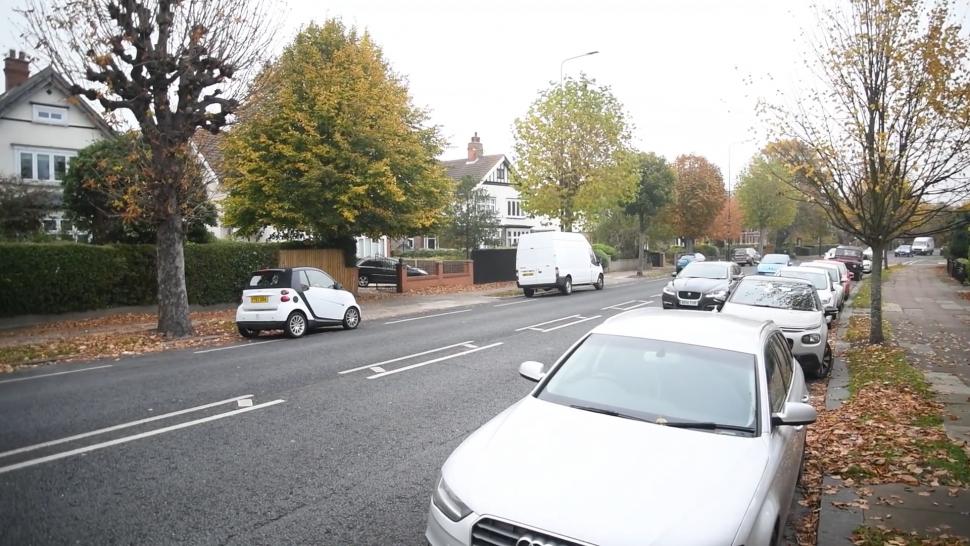 Homeowners appeared in a local news video asking for plans to be scrapped so they could continue to park on the A46, where there is currently an unsegregated cycle lane
by Dan Alexander

A plan for a segregated cycle lane described as "controversial" by local press has been scrapped, the Grimsby Telegraph reports.

The A46 currently has a painted unsegregated cycle lane, which is often used by motorists to park near their homes.

However, the plans would have seen double yellow lines extended along the route and segregation implemented — preventing on-street parking.

The plans have been shelved following a period of consultation, meaning the active travel infrastructure will no longer be installed.

Residents argued that many properties do not have off-street parking so preventing people from parking in the cycle lane would force more traffic onto the surrounding streets, which already struggle with parked cars and parents picking up and dropping off children at two local schools.

One vocal critic of the plans, Craig Lamb, said he is pleased the campaigning paid off, saying: "We're not against the cycle lane, we just want it to be done in the right way.

"I'm pleased these particular plans were rejected. I'd like to know whether or not our objections made an impact too. Myself and others were never against the idea as a whole, just the plans that were proposed.

"I'm glad we did what we did though as it paid off in the end. If it had gone ahead, the congestion on the side streets would have been awful."

In November, Mr Lamb appeared in a video filmed by Grimsby Live, and reposted on the road.cc live blog, in which he appealed for the plans to be rethought.

> Won't somebody please think of the parking...Moaning motorists made miserable by segregated cycle lane plans

Drowned out by the noise from passing traffic, he argued the plans were "hypocritical" considering residents were unable to get planning for off-street parking due to the area being a conservation zone.

"The hundred cars here would have to be parked elsewhere," he said. "The amount of school traffic is already excessive so the risk of accidents during school pick-up and drop-off times would be drastically increased if all these cars are forced to park on the streets in question."

The video ended with a shot of a line of vehicles parked in the unsegregated cycle lane just metres from where the interview was held.

A spokesperson from North East Lincolnshire Council said: "The proposal to introduce a dedicated cycleway on a section of the A46 will not go ahead.

"The decision follows extensive consultation carried out in late 2021. If support could have been secured, the new cycle lane on Weelsby Road would have run between Bargate and Peaks Parkway.

"Councillor Stewart Swinburn, portfolio holder for environment and transport at North East Lincolnshire Council, would like to thank those who participated in engagement surveys.

"With all the surveys reviewed, Cllr Swinburn can confirm that the proposal to introduce a new cycle lane on Weelsby Road did not secure the level of support required through engagement surveys.

"The council will continue to explore other avenues to improve cyclist safety along this route. Subject to Department for Transport approval, highways officers are looking at other locations where cycling infrastructure improvements can be implemented."

Cllr Swinburn said: "In this case, we’ve decided not to go ahead with a protected cycle lane because the alterations required to install the cycleway were not supported by the community.

"A large number of people, including residents, business owners, cyclists who use the route, and staff and students at the Grimsby Institute, completed the most recent survey, and I’d like to thank you for your comments."