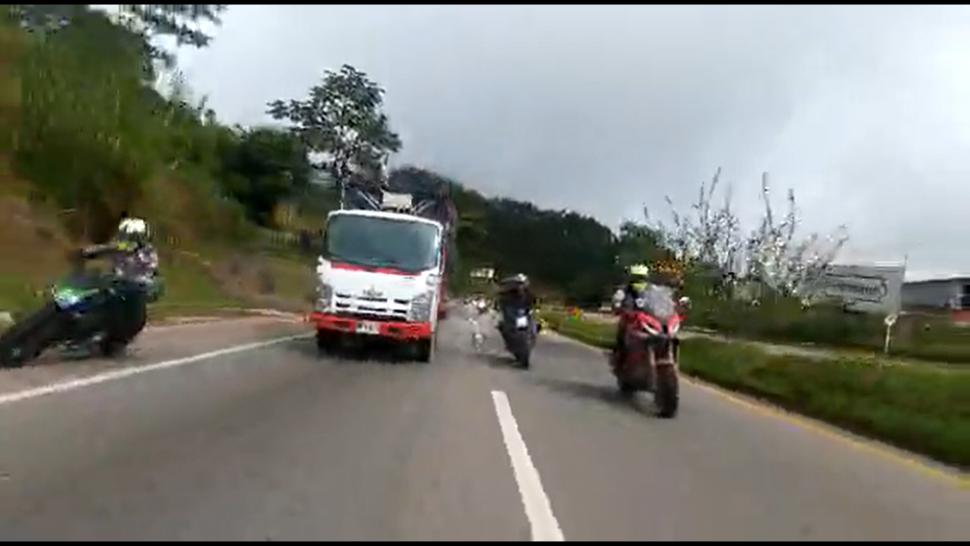 The video from Colombia shows a motorcyclist race up the inside of an HGV, colliding with a cyclist riding on the hard shoulder
by Dan Alexander

A video doing the rounds on social media shows the shocking moment a motorcyclist speeds up the inside of an HGV in Colombia, smashing into a cyclist riding along the hard shoulder.

Information from the crash scene, believed to be on Sunday, suggests both the cyclist and motorcyclist escaped serious injury, the former was pictured shortly afterwards sat on a wall at the side of the busy road between the capital Bogotá and La Vega.

The bicycle rider had been violently knocked off when the motorcyclist, part of one of the many groups who reportedly travel the route at high speeds, undertook an HGV and collided with the rider using the hard shoulder. The motorcyclist then took out another member of their group who was also uninjured.

How a split second of madness can have devastating consequences. Be careful out there..

Footage from a cyclist passing the scene shortly after shows the motorcyclists' damaged bikes lying further up the road as another group of bikers speeds past.

According to Colombian national newspaper El Tiempo, so far this year 473 people have been killed in traffic incidents in Bogotá — 75 of those cyclists and 200 motorcyclists — and the shocking nature of the video has prompted calls for action on road safety.

One local rider said little is done to stop speeding motorcyclists in the area, to the point where he has stopped riding on the road where the crash happened due to the danger.

"And next Sunday they will be back, nothing is going to happen," Andrés Felipe Vergar said. "As for me, for years I have reduced my training in this way. A pity as it is a very good place to train, but on several occasions I experienced situations like yesterday [Sunday]."