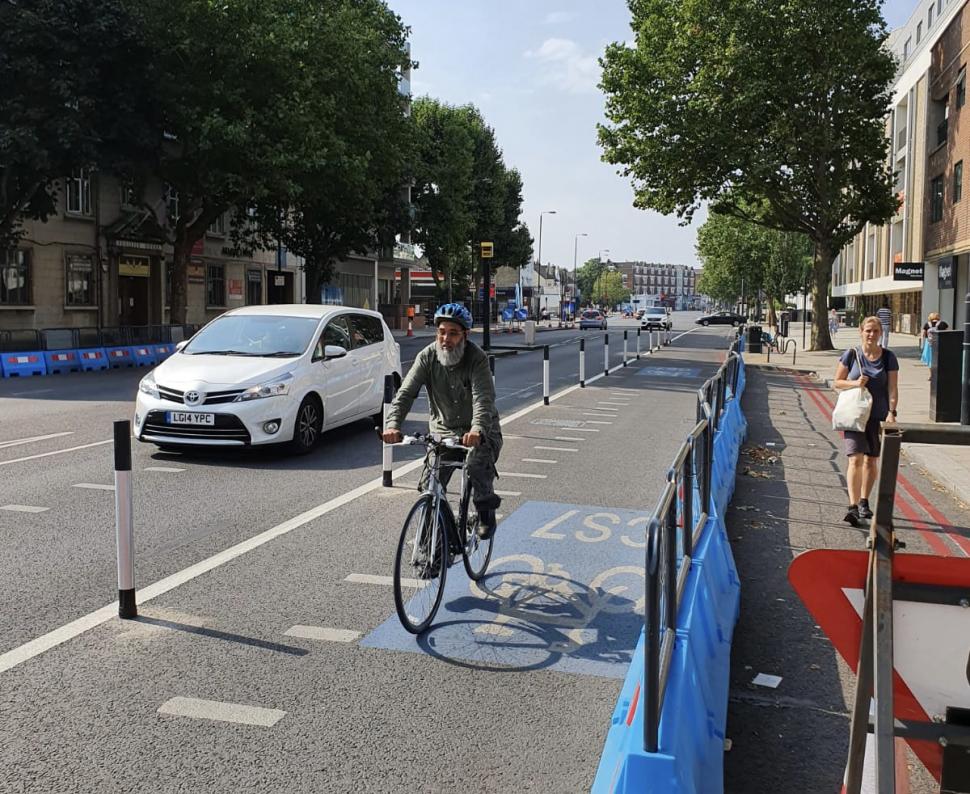 Transport for London (TfL) has announced a trial upgrade to the key CS7 cycle route between Oval and Elephant & Castle, as well as proposed changes to the A23 from Oval to Streatham, to create a safe bike route for the thousands of south Londoners taking to two wheels during the pandemic.

Consultations have been opened on both schemes, with construction due to start next month on both so that they are ready for use by cyclists in April.

CS7, one of the first Cycle Superhighways to be opened in London a decade ago currently runs from Colliers Wood to the City of London via Tooting, Clapham, Oval, the Elephant and London Bridge.

TfL has gradually being upgrading the route during the pandemic (the stretch through Balham is shown in the picture above), and is now turning its attention to the section from Oval to the Elephant, with plans including:

A restricted left turn from Kennington Park Road into Kennington Lane (westbound) for all traffic except cyclists and Emergency Services, to reduce the likelihood of conflict between motor vehicles and people cycling

New and longer bus lanes will match the existing 24-hour trial operation to enable essential cycle journeys at all times.

Cyclists heading along the A23 from Streatham to Oval via Brixton, while a busy route for people travelling by bike, does not have dedicated safe infrastructure, and measures proposed by TfL to improve safety include:

Creating separate traffic signals for cyclists at key junctions in the Brixton area to give people cycling an earlier green light, and creating larger advanced stop lines for people cycling at other junctions - New restrictions on a limited number of left turns for motor vehicles along the corridor to reduce conflict with people cycling

London walking & cycling commissioner Will Norman said: “I’m really excited to share our next set of plans that will make sustainable transport safer in Southwark and Lambeth. Throughout the pandemic we have seen a significant increase in cycling as a form of essential travel and exercise, despite a huge drop in the number of journeys being made with Londoners staying at home. Protected cycle lanes, restricted turning movements and wider bus lanes will all reduce road danger for people riding bikes in this area.

“These changes will also extend cycling routes in southwest London and its surrounding areas, building on our growing cycle network. It’s really important we hear how these trial changes work for those travelling around the area, so I urge people to provide their feedback on the TfL website.”

Councillor Claire Holland, deputy leader of Lambeth Council, with responsibility for sustainable transport, environment and clean air), said: “This is good news for our borough and furthers our aims of reducing danger for people who cycle as well as boosting bus journey efficiency.

“Changes to main roads in Lambeth, together with area-wide low traffic neighbourhoods on our local streets, are the only way we make Lambeth into a borough whereby everyone has access to affordable and safe mobility options. I would encourage people in Lambeth to feed back to TfL on how the changes are working whilst the experimental schemes are in place.”

“We have long been supporting TfL in making this key south London destination friendlier and safer for pedestrians and cyclists,” she said. “Working with the community and representing their views to TfL to get the implementation right is a critical role for the council.

“Southwark Council is committed to helping people to upgrade to cycling and walking, modes of transport proven to improve personal health and happiness, as well as supporting better air quality and road safety for all.”

From tomorrow, consultations go live on both schemes, with the one relating to the A23 here, and the CS7 upgrade here.