Is the Tour de France already over?

Short answer: No. But Pogačar’s serene passage over the cobbles, while most of his rivals – particularly Jumbo-Visma – were in complete disarray, doesn’t bode well for a healthy GC challenge
by Ryan Mallon

On stage five of the 2014 Tour de France, a wet and wild jaunt over treacherous cobbles on the way to Arenberg, Vincenzo Nibali effectively sealed his first and only overall triumph at the world’s biggest bike race.

The Italian, riding in the company of classics specialist Lars Boom and teammate Jakob Fuglsang, was a picture of calm and studied concentration as his rivals one by one lost their nerve in the rain.

By the finish, Alberto Contador had shipped almost three minutes to Nibali. Defending champion Chris Froome didn’t even make it to the first cobbled section, abandoning after hitting the deck hard early in the day. The Tour, as a contest, was over, long before the riders even had to think about using their small rings.

For a brief period during today’s stage to Arenberg, which featured many of the same cobbled sectors conquered by Nibali eight years ago (though the weather was much more favourable this afternoon), it seemed as if history was about to repeat itself.

Tadej Pogačar, who proved earlier this spring that he’s no slouch on the cobbles, had broken away from the main bunch alongside one-day star Jasper Stuyven.

Behind the rampant Slovenian, last year’s fourth-place finisher Ben O’Connor was floundering in a futile chase group after puncturing on the second cobbled sector. Jack Haig, third at the 2021 Vuelta, crashed and abandoned the race. 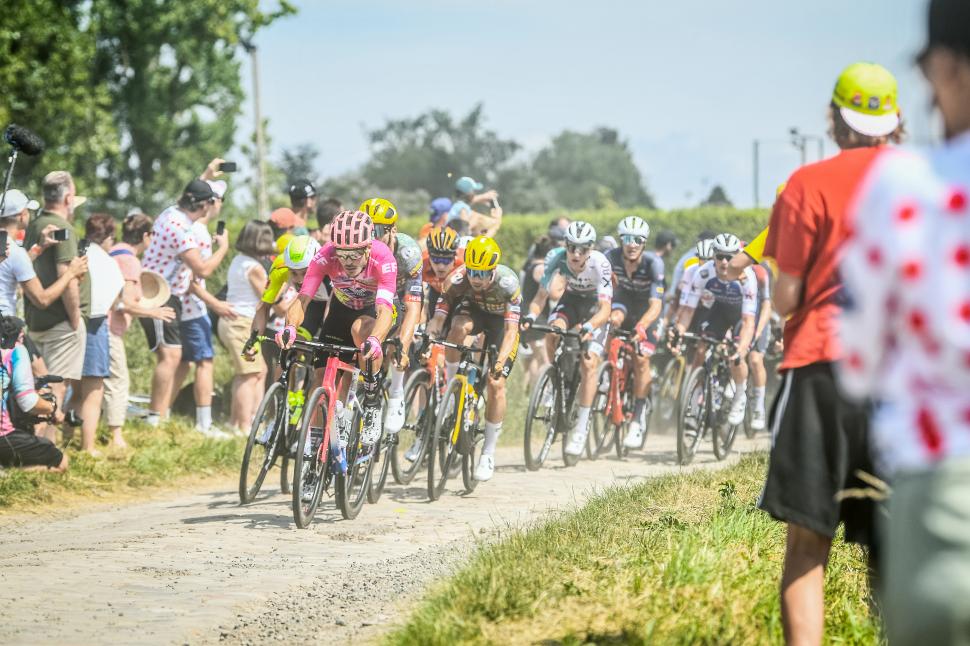 Even more importantly for the general classification, Jumbo-Visma – the superteam most capable of challenging Pogačar’s Merckxian pre-eminence at the Tour – experienced the kind of unmitigated chaos that has stalked the squad’s leader Primož Roglič since his last-minute collapse at the 2020 edition.

First, the hitherto invincible yellow jersey Wout van Aert crashed early on (and almost rode into a car on his way back to the peloton), his superpowers weakened during a crucial part of the stage. An untimely mechanical for Jonas Vingegaard then led to a Wacky Races-style series of intra-team bike swaps and panicked toing-and-froing.

Shortly after Jumbo-Visma’s headless chicken comedy routine, Roglič was right on time for his annual appointment with disaster. The three-time Vuelta winner – as susceptible to horrendous misfortune as he is to producing unwavering displays of dominance – crashed into a wandering hay bale and dislocated his shoulder. While he was able to pop it right back in, with the help of a spectator’s chair, the Jumbo-Visma train had already left the station, with Vingegaard in tow.

Even the riders able to make the ever-diminishing main group of favourites, such as Aleksandr Vlasov and David Gaudu, were no match for the serenely confident Pogačar, who looked capable of taking on Tom Boonen at his peak on the dusty farm tracks of northern France. 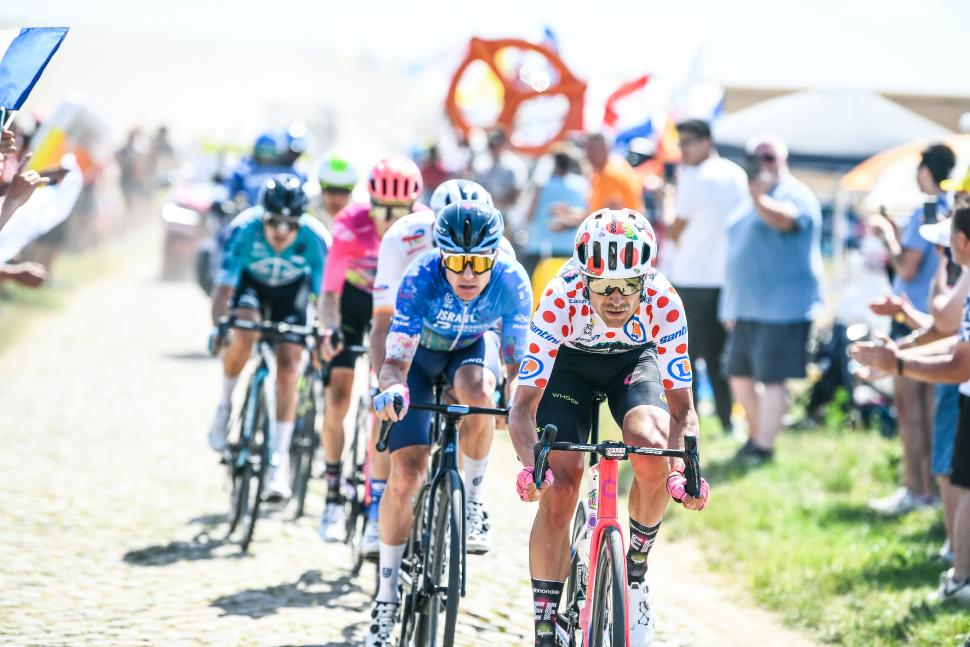 While we were all treated to thrilling, edge-of-the-seat viewing, it was hard to shake off the ominous sense of dread that lingered over the race with around 15 kilometres to go.

One of the great paradoxes of grand tour racing is that often the most exhilarating single stages and epic individual performances can stifle – or even kill off – the rest of the race.

Nibali’s classic show on the cobbles in 2014 is a case in point, so is Pogačar’s long-range escape to Le Grand Bornand last year. Heroic historic rides, certainly, but the Tour is 21 days of racing, not just one.

We may relish those blistering, all-action stages at the time; but if they’re followed by two and a half weeks of suspenseless tedium, were they really worth it?

In any case, with the dust now settled (literally and metaphorically) on a chaotic stage, did Pogačar really sew up his third-straight Tour de France win today?

While it may have seemed that way when he jolted off the front with Stuyven, as the field was decimated behind, by Arenberg the case was not quite as clear cut.

Three of his big rivals sustained serious blows today – Roglič is now over two minutes down on his compatriot; O’Connor is over four minutes back; Haig is out. 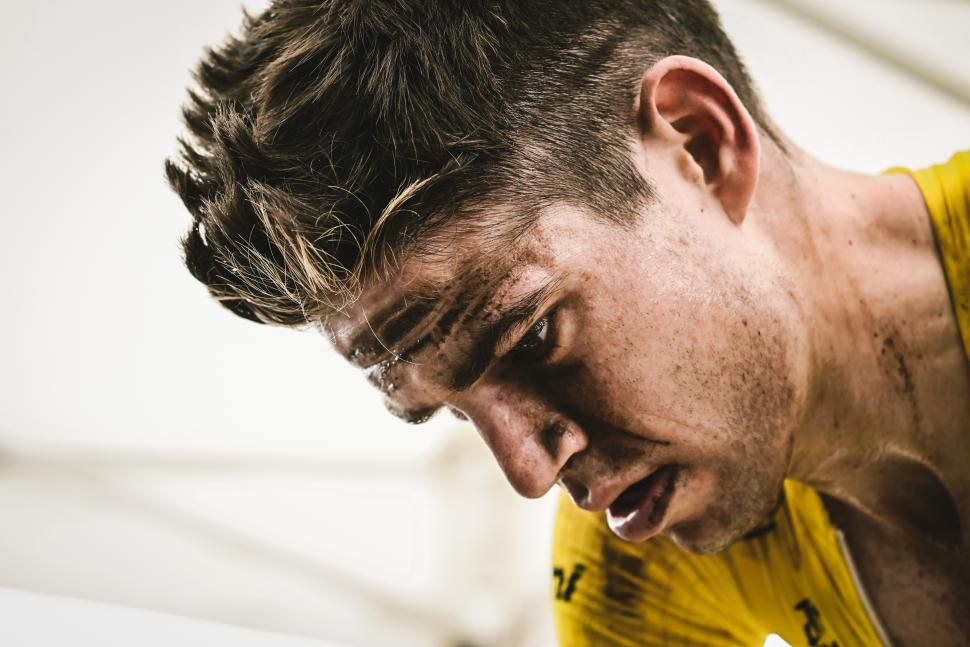 On the other hand, a resurgent Van Aert limited the damage for Vingegaard and in doing so, saved the day for a few other GC contenders, like the Ineos Grenadiers trio of Thomas, Yates and Martínez (and kept his own yellow jersey to boot).

Pogačar and Stuyven also – surprisingly – didn’t kick on following their initial attack, finishing 51 seconds down on the breakaway and popular stage winner Simon Clarke and only 13 seconds ahead of the 45-rider chase group.

On the GC, Vingegaard, Thomas, Yates, Vlasov, Martínez, Bardet, Gaudu, and Quintana all remain within a minute of the defending champion (Enric Mas is currently 1.02 behind).

While the time gaps are by no means definitive at this stage of the race, it will be interesting to see how much psychological damage Pogačar’s apparent ease over the cobbles inflicted on his main rivals for yellow.

Will the 23-year-old’s evident strength, his irrepressible will to attack while the other GC men were doing their best just to hang on, and his apparent superiority on all kinds of terrain cow any pretenders to the throne before they even hit the Vosges mountains?

Of course, Pogačar’s early peacocking on the cobbles could lead to an open, aggressive race – he’s there to be shot at after all, so why not go for it? Roglič has nothing to lose now, and could be given the freedom by his team to go up the road early as a tactical ploy for Vingegaard. Thomas is a previous Tour winner – it should be yellow or nothing for him.

But, as the cliché goes, the Tour is the Tour. Its all-encompassing nature – and importance for team sponsors – dictates that it may be more conducive for a rider, whatever their stature, to accept his medicine and target a podium, or even a top five or ten, rather than risk a do-or-die attack that the Tour’s boy-king could snuff out while fixing the tufts poking out of his helmet.

So – is the Tour de France already over? I’ll let you know on Friday, at the top of La Planche des Belles Filles.