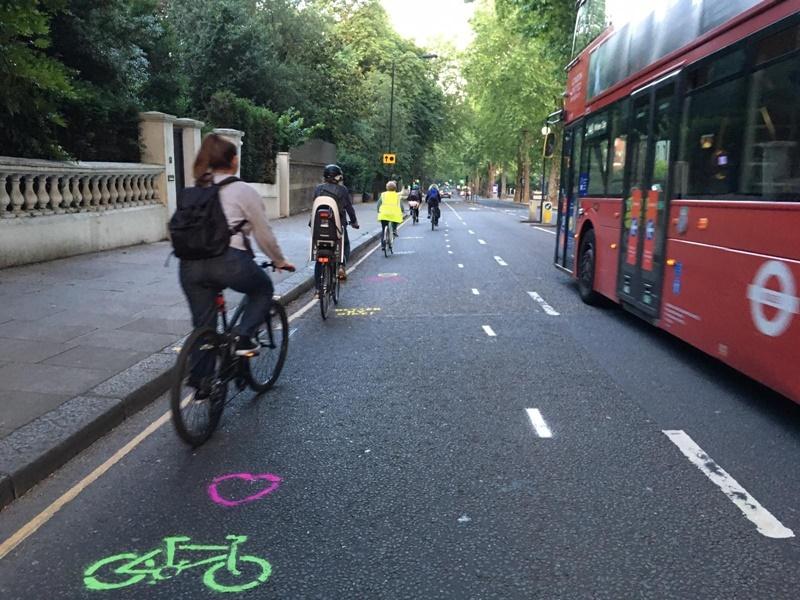 Today, at around 3.30am, members of Extinction Rebellion chalked cycle lanes on either side of Holland Park Avenue – a road where the Royal Borough of Kensington and Chelsea (RBKC) last year retracted its support for a planned cycle lane.

Holland Park Avenue was identified in Transport for London’s (TfL) Strategic Cycling Analysis as an important corridor for existing and potential cycling journeys.

The analysis showed that the route was in the top five per cent for London-wide current and potential cycling demand and also saw large numbers of collisions involving vulnerable road users.

High profile opponents of the proposed cycleway included Jeremy Clarkson, who suggested that the route would see a number of trees chopped down, and actress Felicity Kendal, who claimed the proposals would “cause considerable lack of trade to the area” by requiring a “short-sighted” reduction in parking spaces.

RBKC then retracted its support while a consultation to which it had agreed was still underway.

This morning Extinction Rebellion chalked out a 400m pop-up cycle lane on either side of Holland Park Avenue before inviting RBKC to install barriers to finish the job.

A spokesperson said: “In June 2019, TfL’s long-planned cycle lane scheme through Holland Park Avenue, linking West to Central London, was unilaterally vetoed by the Council before the ongoing consultation was even completed. This was a democratic travesty.

“We are in a different world with a renewed groundswell of support for active transport as a way to get on with our lives whilst protecting public health. We believe a better future is possible.”

The group is calling on the council to produce, “a simple, coherent, and inclusive short-term strategy for our streets that respects the rich diversity of our Borough.”

The spokesperson said: “We demand a safe segregated cycle lane, both ways, along Holland Park Avenue and are not satisfied with a huge back street detour for cyclists (as currently planned). Cyclists are not second-class citizens that have to take a huge detour in order to cycle safely.

“As the council are at last introducing safe cycling on High Street Ken to ‘bring back shoppers’, they should provide the same courtesy to the businesses of Holland Park Avenue.”