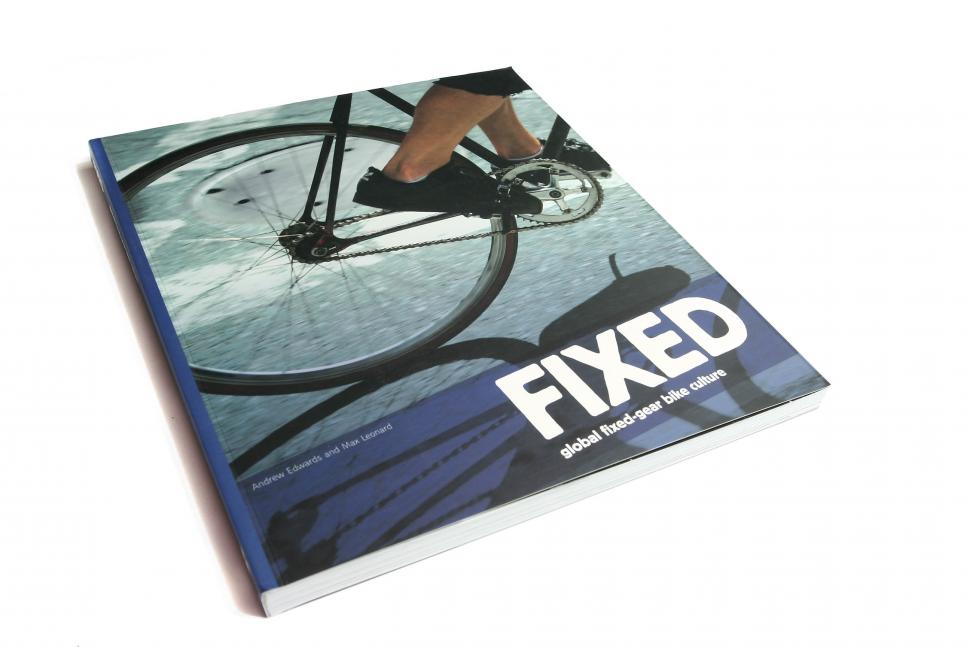 8
10
It's more than just matching pink grips, saddle and rims. But then, sometimes not
Weight:
0g
Contact:
www.laurenceking.com

My heart sank and hit the cleats on my Sidis when I saw this. Here we go, a book full of “fashionable” types trying too hard in jeans two sizes too small and doing twicks on “fixies” claiming the genre as theirs. With spoke-cards. It's safe to assume that the words 'Fixed' and 'Culture' do not sit together easy with me. Never judge a book by its cover but judge a man by his preconceptions, as they may say.

The book starts with the very beginning of fixed, when derailleurs hadn't even been invented, and fairly sprints past its history via track racing, time-trials and The Hour record before stopping for several skinny lattes while investigating Keirin racing, travelling to some of the worlds major cities to visit their bike freewheel-free scenes, and finally checking out the whole on-trend fixed-bike/art/culture mash-up, diverting to have a quick go at roller-racing and bike-polo along the way.

'Fixed' shows its intentions early by effectively running every red light down memory lane before it arrives at the modern fixie culture which occupies the bulk of the book. Keirin racing gets 14 pages which is almost double the number of The Hour record's coverage for example, while the 'Modern Track' chapter is a sparse 4 pages, this may have something to do with Keirin and its NJS regulation parts that the trendiest fixie riders seem to be so, er, fixated upon, although this isn't to say they breeze past The Hour record as it's well covered with some refreshing input from both Obree and Boardman.

From there on in it's a knee-popping spin deep into the current freewheel-free 'culture'. How fixed went from the track to bike-messengers and thus to the new wave of believers, from counter-culture to mainstream, focusing on New York, San Francisco, London and Tokyo which seem to be the epicentres of new cool for the trend. Sections explain how riders are now expressing themselves through a new language of tricks, secret 'alley-cat' races, and the rebirth, rejuvenation and sexing-up of both bicycle-polo and roller-racing. 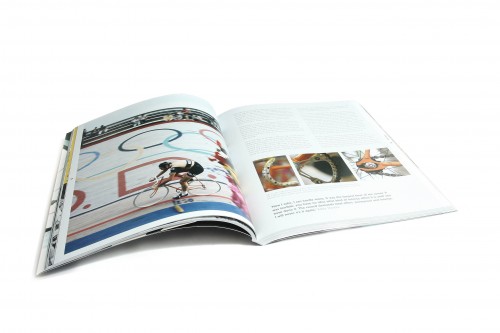 'Fixed' is densely and beautifully illustrated with photographs of bikes and riding, all uniformly excellent, be that exquisite studio shots of both classic fixed road and track bikes or modern fixies, and the breadth of images covering the history the 'lifestyle' and the concept of the bike being an art-piece, be that the art of construction or the lacquering of modern-culture onto the machine, is impeccable. It's perfectly possible to enjoy this book on its pictures alone, revel in the imagery and totally ignore the words, but that would be a mistake. There's a lot of information secreted in the text, giving the reader a comprehensive insight into a world that on the surface may be just coloured rims, dubious dress-sense, questionable hair-styles and dubious road-sense, but can be a whole lot more.

Authors Andrew Edwards and Max Leonard are both keen riders, the former also designed the book and is a very handy amateur racer to boot, and their knowledge and passion for the fixed-wheel is beautifully obvious, well, for the modern phenomenon at least. The previous 100 years of fixed-wheel riding is far too briefly dealt with and there are no pictures of old men riding their fixed-wheels with saddlebags just getting the winter miles in, but that's probably a fixed culture the new breed wish to forget. 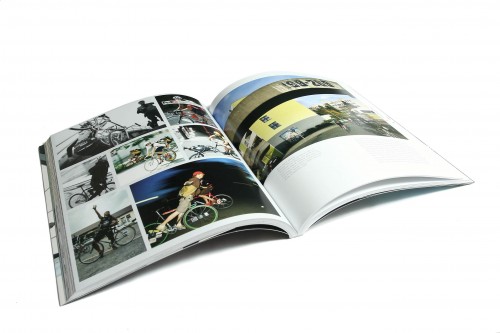 It's impossible to ignore such passion about a subject though and get carried along by its loving arms, and I was almost ready to be convinced by the whole 'fixie' thing until the final quote in the book lifted from an exhibition catalogue; "As much as fixed-gear riding is about pure joy, it is also a rebellion against cookie-cutter life. It is about bending the rules, disobeying traffic laws, wearing no helmet, using no brakes in the streets". a quote placed amongst two pages of fixie bikes all looking the same with cookie-cutter lego-coloured components, while the whole "breaking rules" thing, well, you know. I can't figure out if this is knowing self-parody, amusing, ironic or just plain shooting yourself in the foot, whatever, my heart plummeted again.

It's more than just matching pink grips, saddle and rims. But then, sometimes not.

"Fixed is the first book to document global fixed-gear culture. It joins the dots between the bike’s design, its racing heritage and the customization that marks its appearance on our city streets. It meets the track stars, tricksters, messengers, hill bombers and polo players the world over, linking them to the artists, designers and framebuilders whom the bike has inspired. It tells the story of why these bikes are special through interview, image and archive – exploring the form, function, style and culture at the heart of the obsession."

That's it, all wrapped up in a small trendy courier-bag.

A spirited romp through modern fixie culture, minus marks for being slack and brief with the history.

It will be interesting to pick this up in a couple of years time and see if it is still current or we will look at it a go "what the hell where we thinking?"

For its wealth of images alone it's worth the asking price.

The photography, especially the studio-shots of bikes, and the extensive window into a cycling sub-culture.

The brief lip-service given to the heritage that the current fixie culture is merely a current, and possibly brief, incarnation of.

Would you recommend the product to a friend? Yes. for anyone with an interest in bikes this is a great read. Even if it is just to know your enemy.