Back to REVIEWS
review
Car racks

3
10
Incredibly portable and quick-to-use bike carrier, but the price is shocking and I'm just not convinced by the concept
Weight:
804g
Contact:
www.seasucker.com

The folk at Seasucker have come up with another bike rack, and this one is even smaller than the Talon that we tested last year. The Hornet uses a pair of 4.5in suckers that are attached (typically) to the rear window of your car, holding the handlebar of your bike in place. The good news is that it costs less than the £250 rrp of the Talon, but you get a lot less for your money too, making this look shockingly overpriced. And while it does hold onto your bike reliably, I was a lot less happy using this than I was the Talon.

Seasucker designed the Hornet as the first of its range of sucker-mounted racks where you leave the front wheel in place. All the previous models worked by clamping the front dropouts down, with the front wheel first removed and then either stowed in the vehicle or mounted via optional brackets alongside the bike. Some questioned whether carbon forks were designed to take the different loads that result, and some bike frame manufacturers say that their bikes shouldn't be mounted to roof carriers via the dropouts.

With the Hornet, you leave the front wheel on and simply attach the bike via the handlebar, with the wheels facing outward. The bike's saddle rests against the car without an attachment. 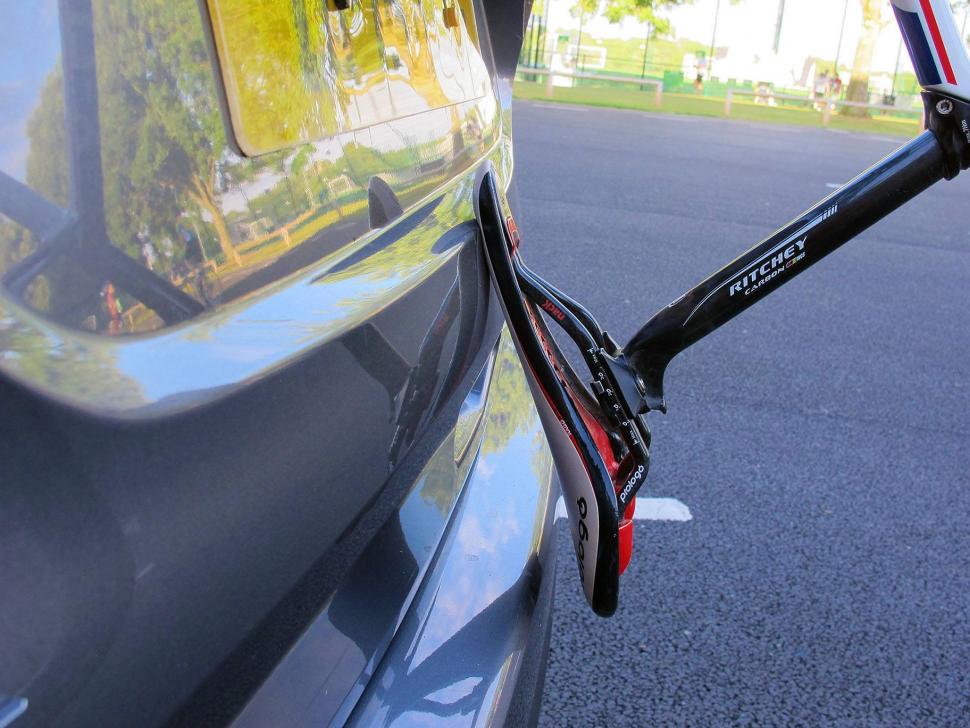 I tried fitting it to a range of cars and was able to find a workable position on each of them – Skoda Octavia hatchback, BMW Z4 coupe and Nissan X-Trail SUV. If your car has a bootlid spoiler below the window then it gets more complicated, but you can normally find a position that works. Fitting and removing it is extremely quick – once you've got an idea of where it best fits, you can have the bike fitted in literally about a minute.

Each of the two suckers has a plastic ratchet strap attached, looking a lot like those used on snowboard bindings. Unlike those (or those on cycling shoes), there's no lever to allow you to really crank it down, so it'll only go as tight as you can push the strap through with your thumb. However, I found that just pushing the strap was enough to keep a firm hold on the bar. 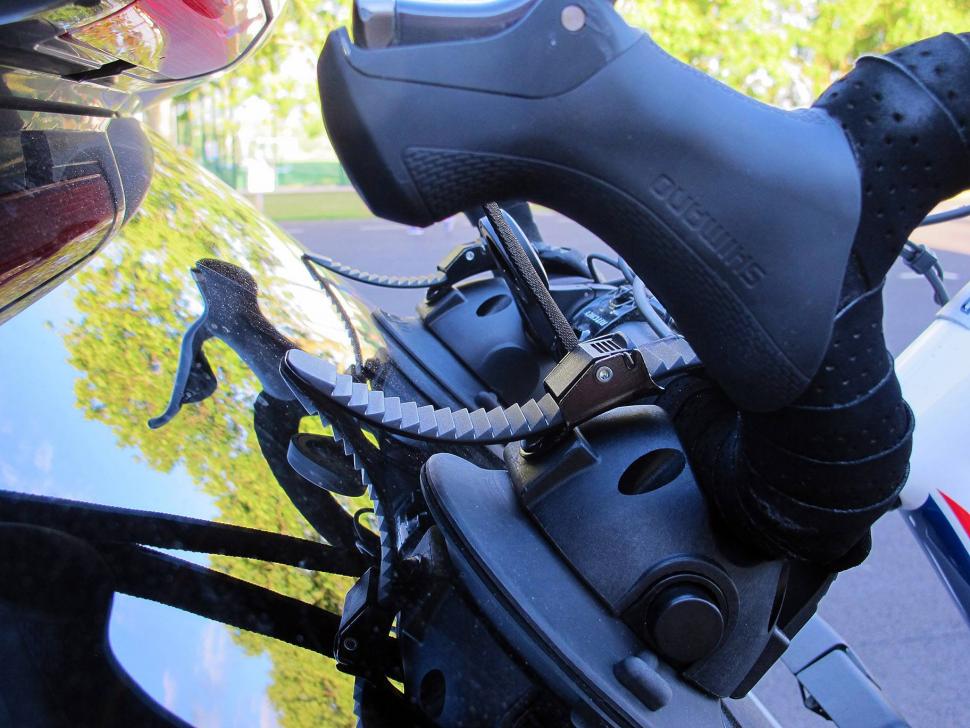 The adjustable length of these straps means you can use it to fix drop-handlebar road bikes as well as flat-bar bikes (either around the grips or the bar itself). I found that with the rather tall hoods on SRAM's hydraulic road brakes, the top of the hoods would be pushed against the car body when you tightened the straps. This seems like it might be A Bad Thing. 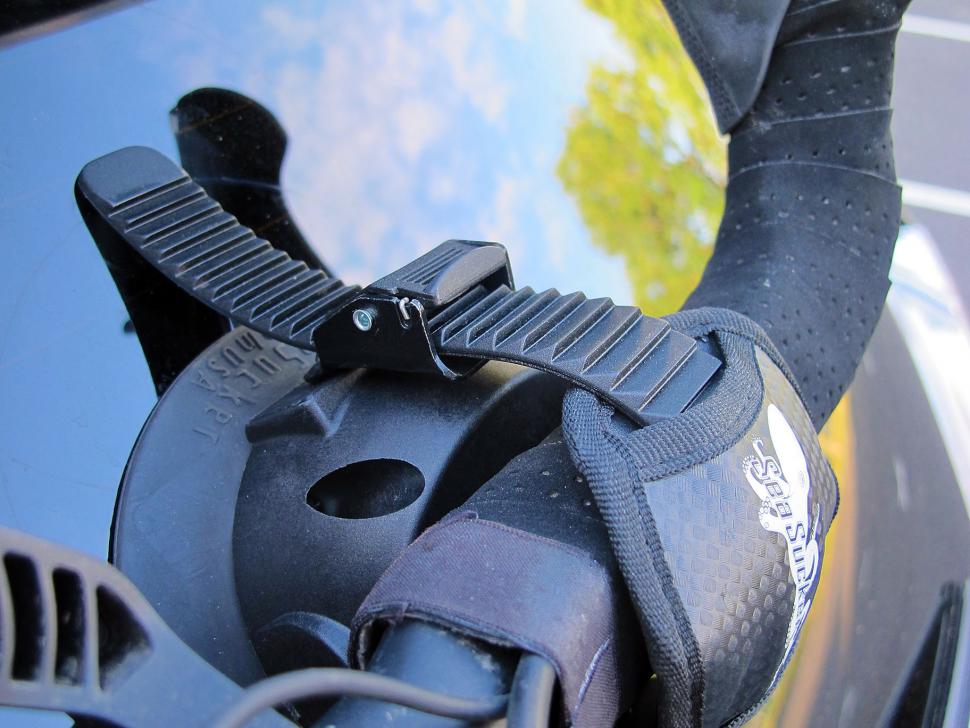 The angle of the tailgate to which you attached the Hornet will affect how the bike's weight is shared between the two suckers and the saddle. When fitted at a shallow angle, most of the weight goes via the saddle, generally onto the bootlid body panel below the rear window. 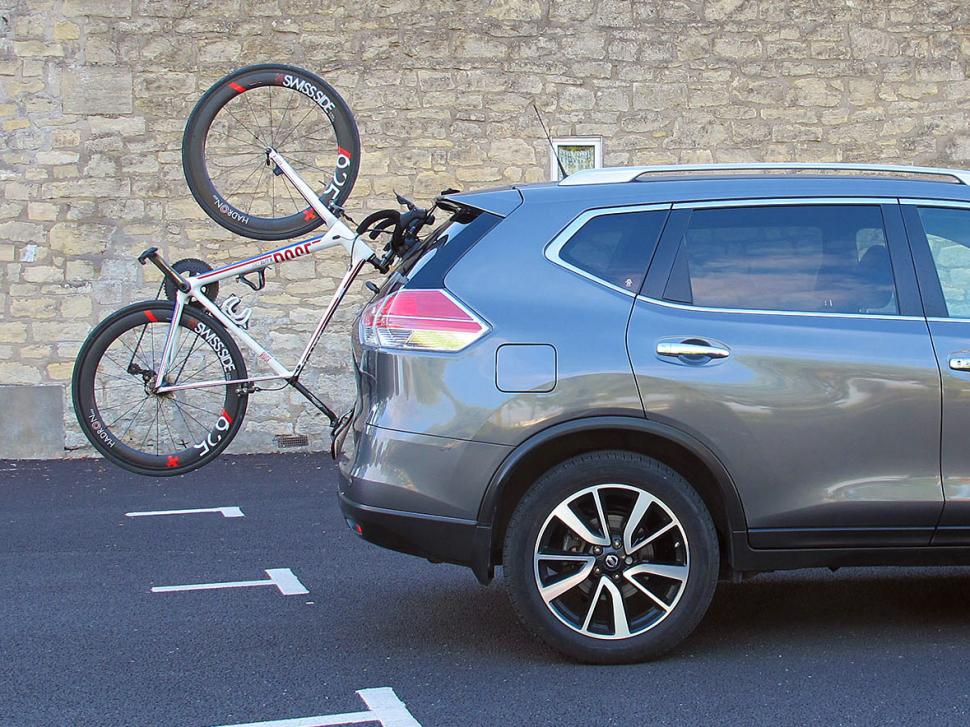 I have several reservations about this. First, even a 7kg race bike is enough to flex the body panel inwards a bit. With a heavier bike (such as a full-suspension mountain bike), there is the risk of permanently denting the body panel, not least as when you drive over bumps the bike will bounce on the saddle. The fact that the saddle isn't attached means that when you go around corners, the bike tends to sway from side to side, with the saddle sliding back and forth across the paintwork. I would expect that over time this would cause damage to the car's paint, and probably quite quickly if you had any gritty dirt on the saddle.

Depending on the shape of your bootlid and the angle at which you set your saddle, there's a good chance that it'll be just the nose of the saddle in contact with the car, as in our pictures, further concentrating the load on the bootlid (and on the saddle itself).

> Beginner's guide to carrying your bike by car

As with the Talon rack, I had no concerns about the Hornet's ability to keep a hold of my bike and not drop it on the motorway. However, the risk of damage to the car meant I was pretty unhappy using it on my own vehicle for a journey of any length. The side-to-side swaying of the bike when going around a corner was more than a little disconcerting. We talked to Seasucker about this at a tradeshow and it suggested that you could buy a third sucker and put it under the saddle to keep it better fixed in place and avoid damage to the car. I think this would be an improvement, but wouldn't work on every car as you'd need a 4.5-inch strip of flattish metal to attach it.

As well as the pair of sucker-strap units, you get a back-up strap with a plastic bar on one end, designed to be trapped in the top of your bootlid and then looped around the bike, to provide extra reassurance in the unlikely event that the suckers released unexpectedly. The whole lot is supplied inside a padded zip case, which is remarkably compact – about twice the size of a large sunglasses case. 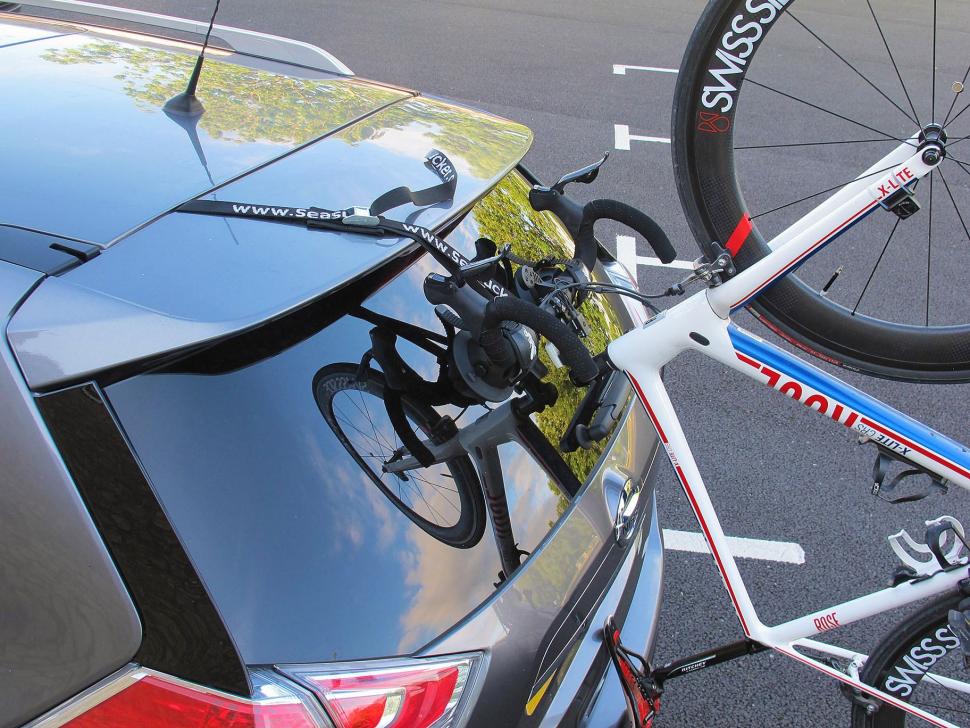 So what about that price then? Pump-action suckers very similar to those used here can be had for around £30 a pop. So you're paying a further £120 for the fixing straps and that case. No, I'm not sure how that works either. If you need to fix your bike to a car that doesn't have conventional roof fixings, you could use a conventional tail-gate mounted rack like the Saris Bones, which could carry more than one bike and is cheaper to boot. Obviously it's nowhere near as portable as the Hornet. 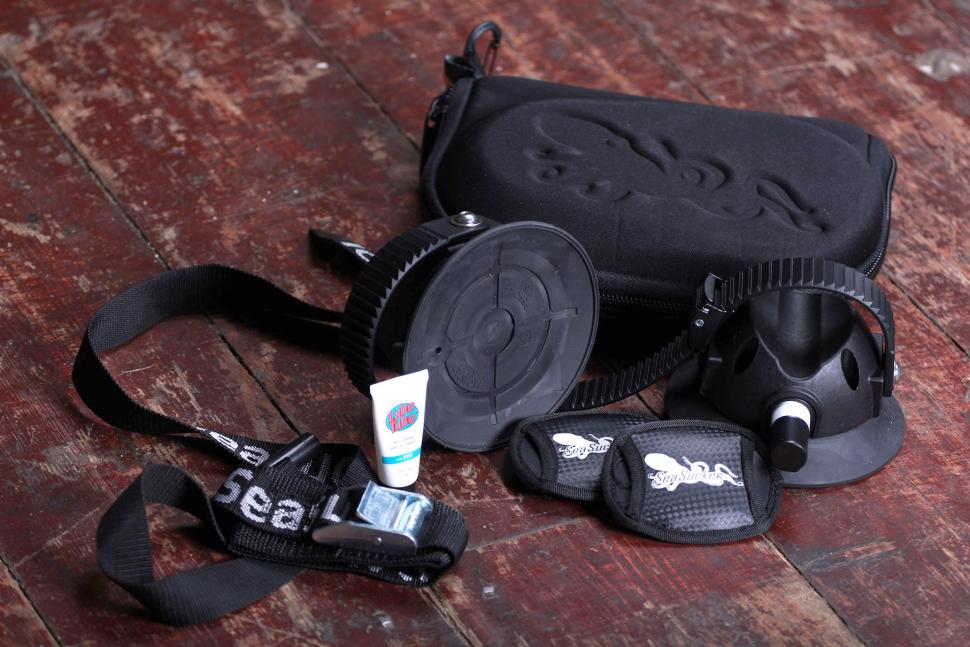 If my need was for an exceptionally portable means of fixing one bike to a bashed-up old car then I might consider the Hornet, but I'd really struggle to stomach the price considering what you get for it. I really liked the Talon (and the matching Bomber range) from Seasucker, but I am much less convinced by the Hornet.

Incredibly portable and quick-to-use bike carrier, but the price is shocking and I'm just not convinced by the concept

Seasucker says: "Our new Hornet 1-bike rack is a small-scale revolution. Billed as the 'Smallest Bike Rack in the World', the Hornet is so compact that it fits into an included 9.5'x7'x3' zippered carrying case for easy storage and travel. The Hornet is far and away the most travel-friendly rack on the market, but it works equally well for everyday use.

"The Hornet is our first 'leave-the-front-wheel-on' bike rack. It is designed to mount to the back window of any hatchback, SUV or minivan using two of SeaSucker's powerful 4.5in vacuum cups (120 lb. rated pull-strength each) to hold the handlebars and hang a bike weighing not more than 35 lbs from the rear glass. Plastic ladder straps securely hold both road and mtb bars to the vacuum cups and make attaching and removing the bike a breeze.

"As with all SeaSucker bike racks, the pump-action vacuum cups also allow the user to attach the rack in just seconds, making the Hornet one of the easiest and fastest racks to install. Simply pump the two vacuum cups onto the back windshield, close the ladder straps around the bars and you're done. And when it comes time to remove it, the Hornet detaches just as quickly and breaks back down into its component parts for storage in its case.

"The Hornet also comes with a safety strap that loops around the bike's steer tube and into a sewn in cam buckle. The strap's tail has a built in plastic peg that, when closed in the hatchback, secures the strap to the car."

Rate the product for performance:
4/10

Held my bike securely but I found it quite disconcerting how it would sway around during cornering, as only the handlebar is held in position. There's a risk of damage to paintwork where the saddle rests on the boot, particularly as it doesn't stay in one place.

Rate the product for weight (if applicable)
10/10

Find me a lighter bike rack, go on...

The Seasucker Talon seemed pricey. This costs less, but there's a lot less to it. I can't really see how it can justify the price, if I'm honest.

I would trust it to hold on to my bike and not let go. However, I didn't like how the bike would sway around and I wouldn't use it on my own car as I'd be concerned about damage to paintwork.

It's very portable, so if you need to travel with a rack, it's hard to beat. It's also extremely quick to fit and remove. However, I'd choose the Talon over this.

Would you recommend the product to a friend? If they had an old car and couldn't stretch to the Talon.

The Hornet is overpriced and doesn't strike me as a very good method of carrying a bike. Yes it's very portable itself, but it just doesn't do the job it's designed to very well. 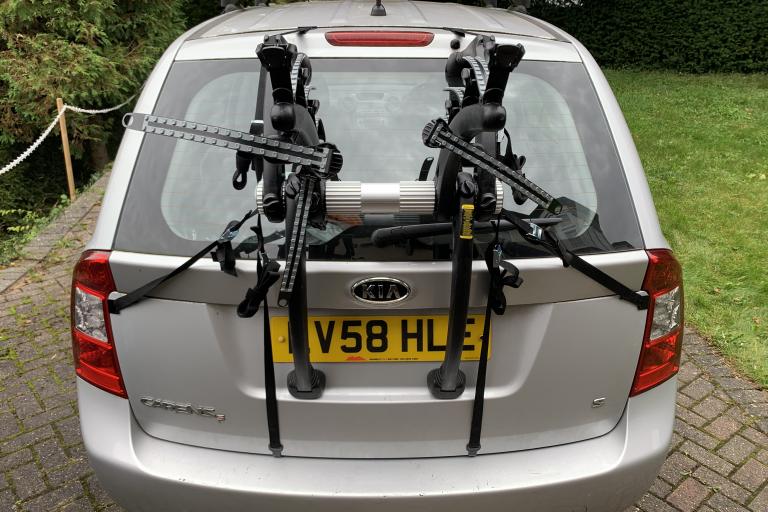 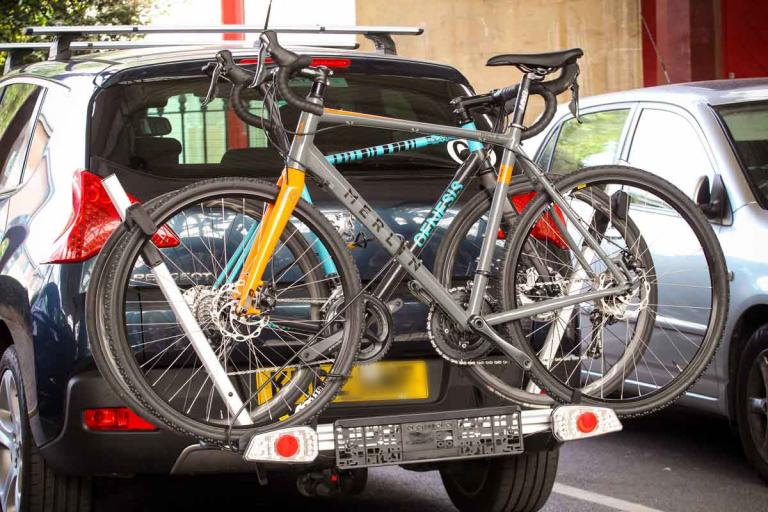 A lightweight innovative rack that clamps the bike without touching the frame, but not without some issues 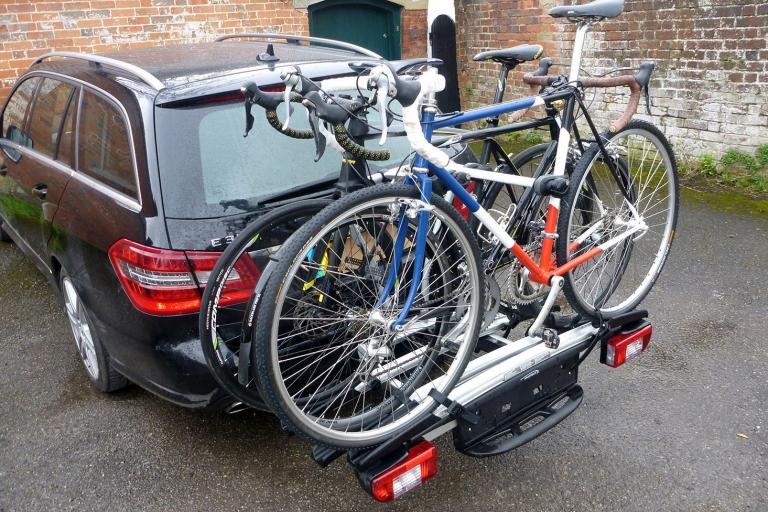 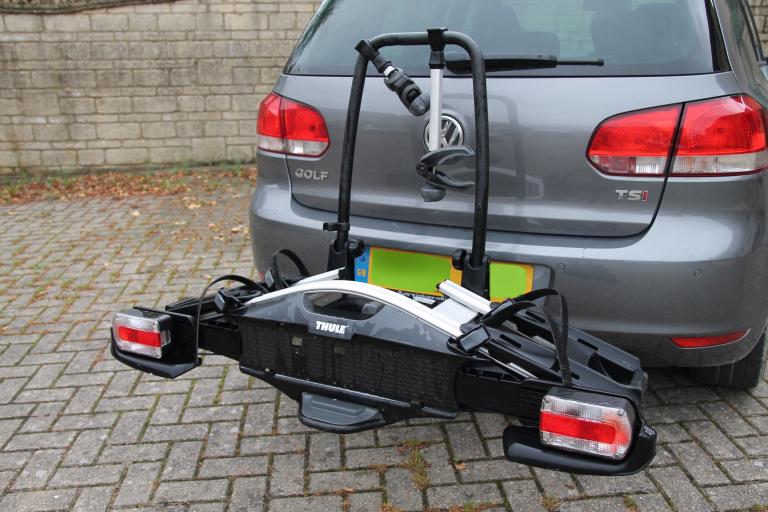 High-quality, sturdy and very easy to use towball bike rack