5
10
Well fitting and comfortable, with a second clear lens included, but multi-coloured lens is distracting
Close eye protection from insects and wind
Non-slip arms and sprung design is comfortable and doesn't interfere with helmet straps
Second clear lens provided
Changing colour tint across across the width of the lens can disorientate
Nose-piece and Spiuk logo are visible when wearing or putting them on
Repeated changing of lenses may affect durability over time
Weight:
28g
Contact:
www.spiuk.com

The Spiuk Profit glasses fit closely and comfortably, and don't interfere with helmet straps, but the multi-coloured lens causes a distraction when looking over the shoulder for traffic or looking for other road hazards.

"A vision with no frames, is a world with no limits" declares the case of the Spiuk Profit sunglasses. Packaged in this nifty storage box, which also holds a second clear lens, the Spiuk Profits have straight arms with a rubberised inner. 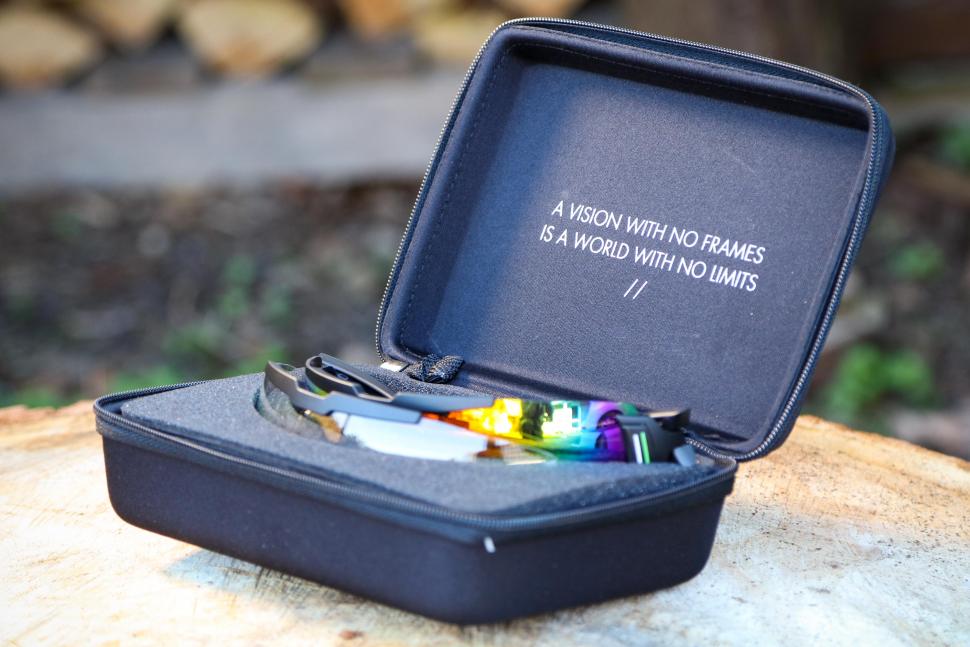 The one-piece lens has a reinforcing bar across the top which gives a slightly sprung effect and gently holds them onto the face. I found this caused no discomfort during long rides, and the rubber arms could grip well either on skin or a bandana without interfering with any of the helmets I tried them with.

Putting them on, I initially had to remove them again, as I thought there was a smudge on the lens. However, this turned out to be a 2cm-long Spiuk logo which is etched into the centre of the lens. It did catch me out a few times and I had to keep checking if it was a smudge or just the logo I could see. Also, there is slight intrusion of the nose-piece into the field of vision. The optics, once you're wearing the Spiuks, are okay, but nothing out of the ordinary. 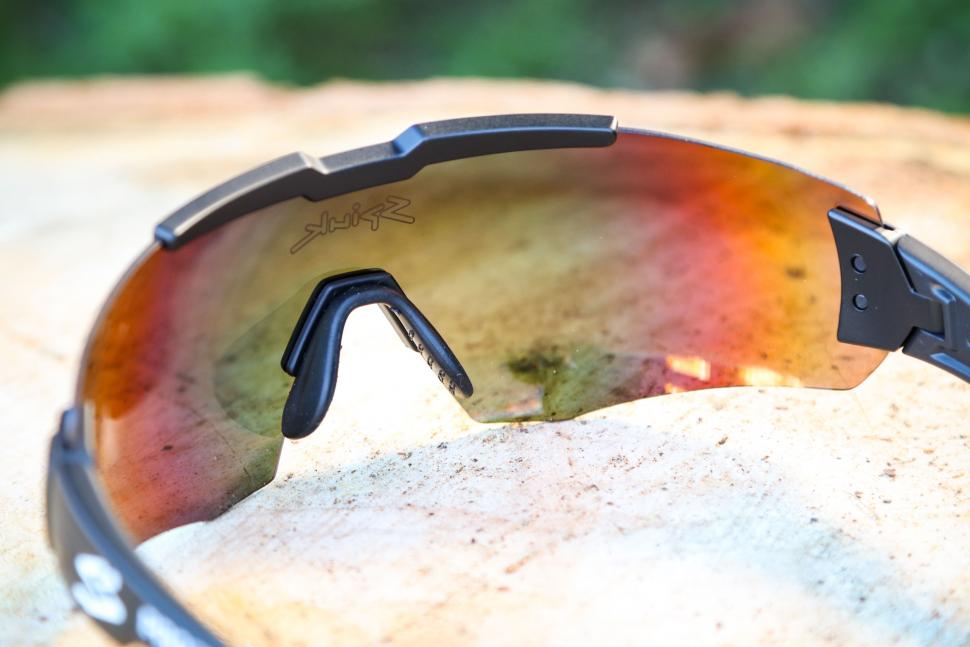 In use, the Spiuk Profits stay closer to the face than other glasses I have tried, but the anti-fog treatment means they stay clear. I was glad of the close fit during efforts of nearby Chew Valley lake, when I would be cycling through clouds of tiny midges. Nothing got past the Profits' lens coverage during testing.

Spiuk claims the Profit glasses to be water repellent, and I found this was largely the case, although in prolonged rain or when really working up a sweat I would have to stop and clean them.

My main issue with the Profits comes with the multi-coloured lens. It features significant colour change across the whole lens, from light brown in the middle, quickly changing to blue, purple, pink and then yellow at the edges (see photo below). When I cycle I frequently check across my shoulder for approaching vehicles or other cyclists, or am scanning the ground, or hedges for any possible hazards. I found the constantly changing colour when glancing side to side actually quite disorientating and offputting. This doesn't occur with a single colour lens, and it's a shame Spiuk doesn't offer the Profit glasses with single colour lenses.

They do come with a clear lens, and the arms detach by pulling upwards, to pull clear of a couple of small tangs –push-fit connections – on the edge of the lenses. The nose-piece is also carefully removed by unclipping it. 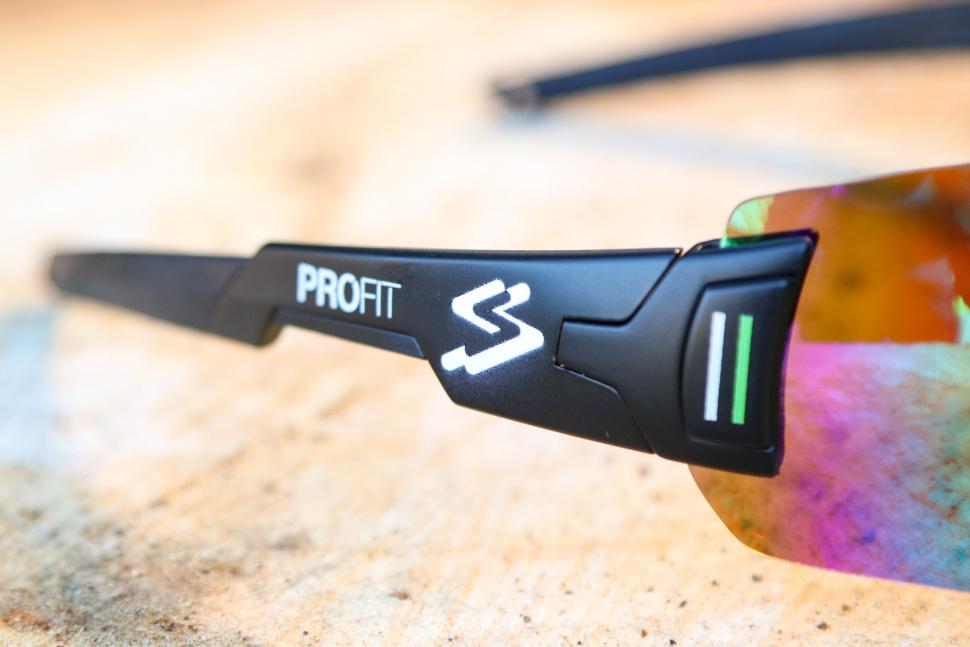 Using the clear lens is fine, although it also features the Spiuk logo in the middle, again leading me to check whether it was a smudge or not. 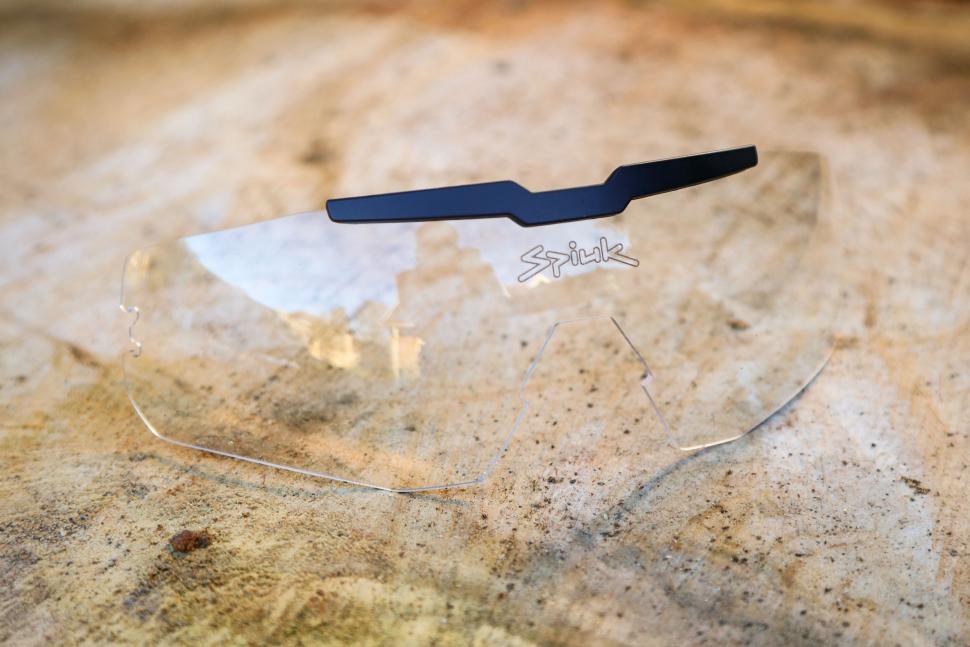 I noted a couple of chips on the tangs after three or four goes at swapping the lenses, but only a long-term test would determine whether these would get worse over time and affect the glasses' durability or not.

Looking at glasses in a similar price band, the Spiuks, at around £70 (€79.90), have some tough competition. The Madison Code Breaker glasses were found to be good performers, with three lenses included, for only £55.

Tifosi offers its Amok Sunglasses with photochromic lenses for similar money, £69, although Stu noted the frame could intrude slightly. Stu also tested the Galibier Surveillance Precision Glasses and found them to punch well above their weight at only £37.

In summary, the Spiuk Profits fit well and are comfortable for long periods, but the multi-coloured lens is a distraction when riding, the Spiuk logo and nose-piece affect the field of view, and small chips on the retaining tangs showing after just a few changes of the lens raise questions over the long-term durability. Overall, there are other sunglasses in the marketplace with clearer optics and better performance for less money.

Well fitting and comfortable, with a second clear lens included, but multi-coloured lens is distracting

Spiuk says: "PROFIT glasses are built around a very large water-repellent lens with an extra-flexible minimalistic frame. Nothing will obstruct your field of view. No blind spots. No surprises on the way. Little details that are vital for top performance. They're a feat of engineering and also stand out for their light weight and ergonomic design. Learn to see beyond your limits"

I had a few issues with this statement, as the logo and nose-piece do obstruct the field of view, and the lens causes a distraction.

However I did find the nose piece is visible when wearing the glasses, also the Spiuk logo can sometimes make you think there is a smudge on the lens.

The extra reinforcing bar at the top of the glasses keeps them more rigid than other frameless cycling glasses I have tried. The rubberised arms and nose-piece work well for keeping them stuck to your face.

Rate the product for performance:
5/10

These glasses fit closer to the face than others I have tried, and the large lens means they are good for keeping out small insects, dust and debris.

I found that with repeated changing of the lenses, the very edge of the lens would start to show small chips. Hopefully this won't get worse over time, however it would take a longer test to confirm this.

For a wide coverage lens, 28 grams is a fine.

Rate the product for comfort (if applicable)
8/10

The Spiuk Profit glasses are held on via slight compression of the arms onto your head, and I found them comfortable. I tested them for up to four hours at a time and had no issue.

The included case and additional clear lens are good to have, but because of the performance of the gradual tint of the lens affecting side to side glances I feel there are better sunglasses are out there for similar or less money.

Unfortunately not great, because of the lens – I felt it caused a distraction when cycling.

Comfortable and keep insect and debris out. Took a good few hours to steam up.

I found the nose-piece intrudes a little into the viewing area, and the Spiuk logo can make you think they are smudged when putting them on. I really wasn't keen on the way the sunglasses changed colour so much during over the shoulder lifesaver checks, or side glances, as it could almost create a flickering effect. I think a single colour lens would have performed a lot better.

It's in the ballpark for a mid-range pair of sunglasses, but better performing sunglasses can be had for less money.

The Spiuk Profits fit well and are comfortable for long periods, but they are let down by the multi-coloured lens that is a distraction when riding. If Spiuk could offer these with a single colour lens I think they would score better. Small chips on the retaining tangs showing after just a few changes of the lens raise questions over the long-term durability. I also found the Spiuk logo and nose-piece affected the field of view. Overall, as there are other glasses in the marketplace with clearer optics and better performance for less money, I am scoring these 5 out of 10. 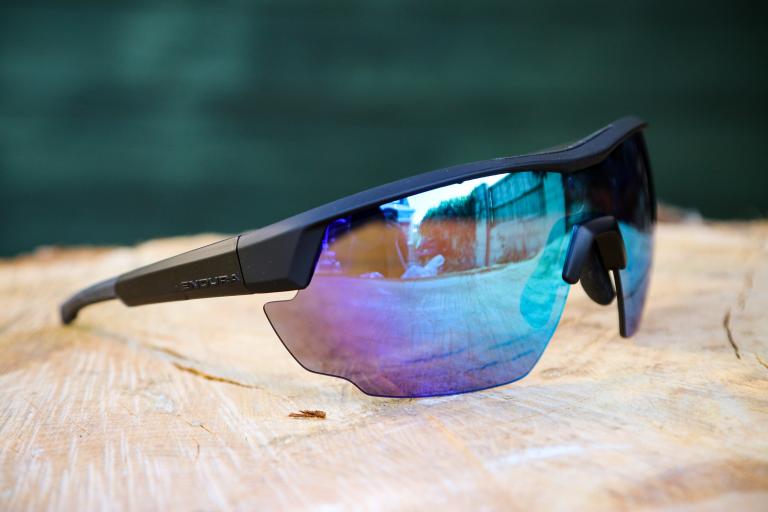 Impressive glasses for most conditions and road-biased riding, with only some minor compromises 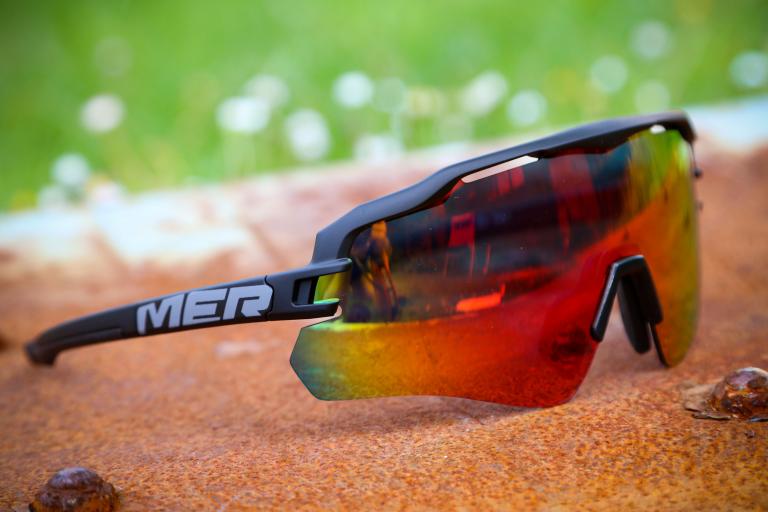 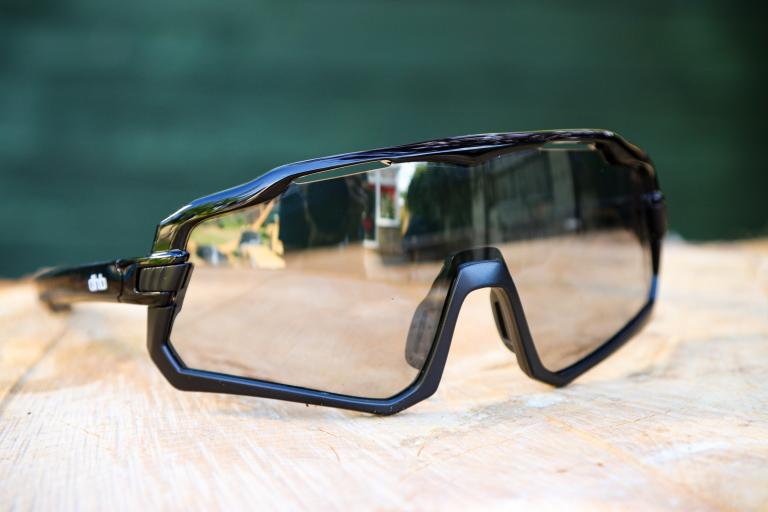