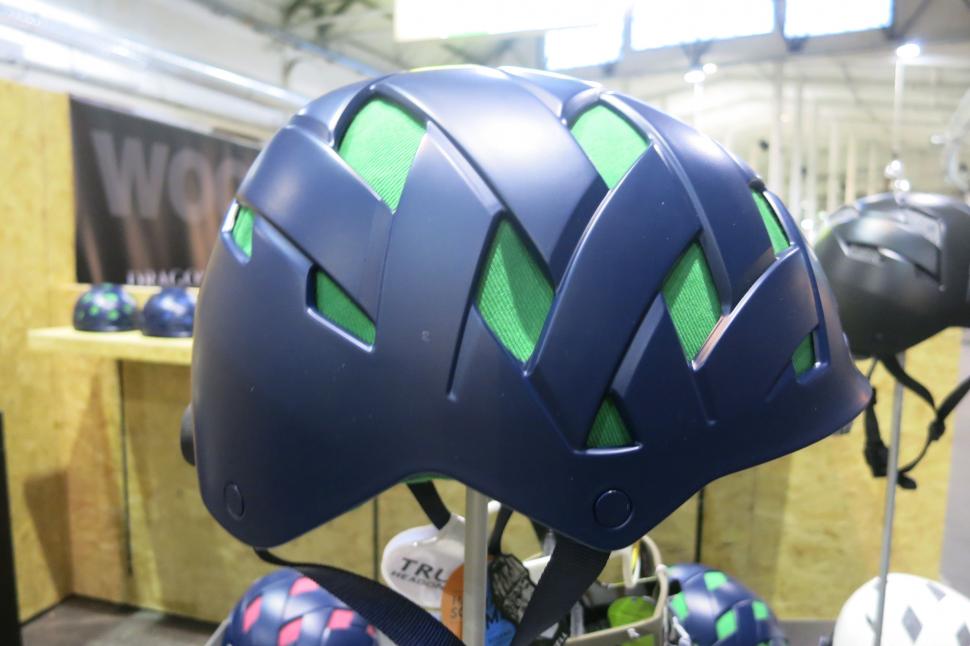 The weekend’s Berlin Bike Show – Berliner Fahrradschau – was full of interesting products and original ways of doing things, and here are a few that stood out.

Rockwell helmets, designed mainly for urban use, look different from any others we’ve ever seen thanks to a lattice-like appearance of the shell, and they’re very unusual inside too.

The shell is made from an elastic ABS (acrylonitrile-butadiene-styrene, if you want the full name), while the inlay features comfort cushions on the side that touches your head. These use Vaco12 technology that incorporates what are effectively mini bean bags. They’re little sacks filled with small round beads. The idea is that they wrap around your head for a better fit than you get with a standard helmet. 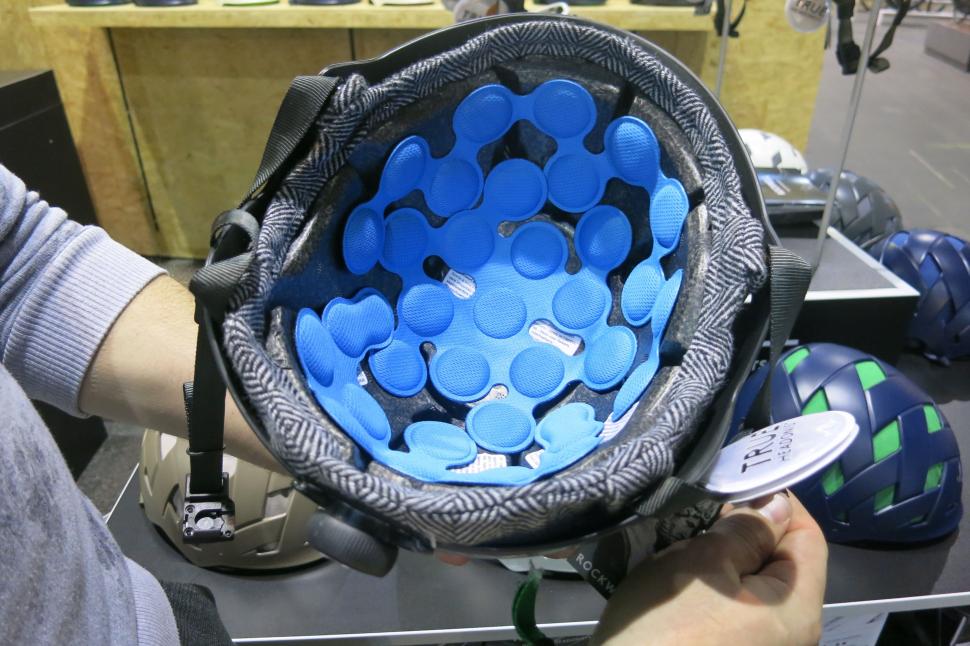 The gaps between the little sacks are designed to act as air channels. We’ve not used one of the helmets but Rockwell says that they’ve done tests with the German Sport University Cologne and in 30°C heat the inside temp of the lid only went up by 2°C.

They do, of course, conform to European safety standards (EN 1078) for cycling.

Each helmet comes with an lockable bag that you can attach to your bike to protect it from dirt, water and theft. 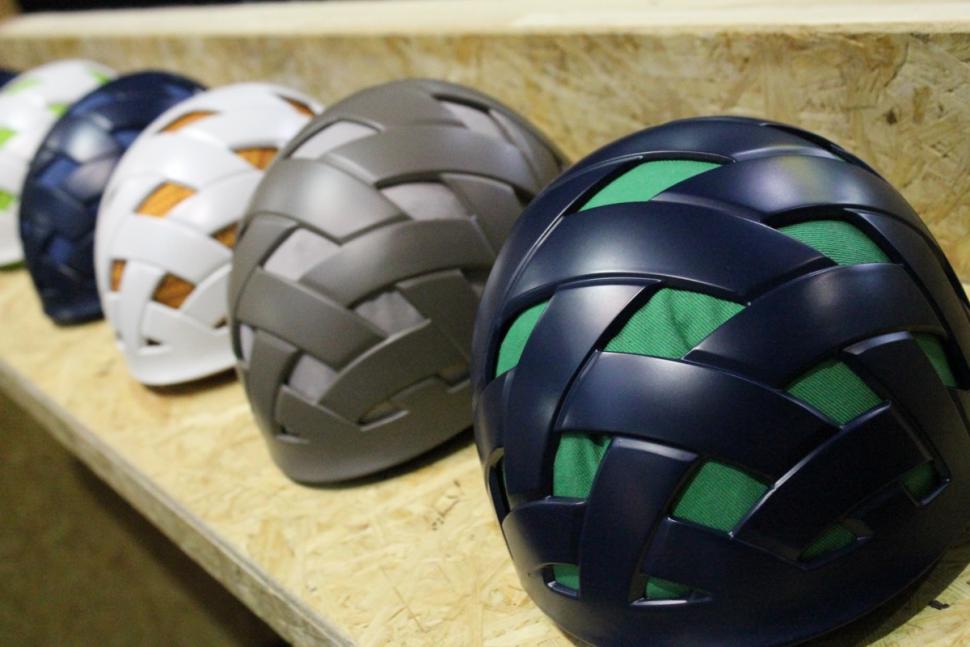 You can buy either a stock helmet (from €139.95) or choose the hardshell, inlay and strap combo you’d like from a variety of colours. Rockwell is working on a visor (an eye shield rather than a peak) that clips to the front of the helmet too.

The Gokiso Super Climber hub from Japan has been around for a while but the design has been updated and we’ve not covered it here on road.cc before. We saw it lurking on a bike from Passoni.

As you can see, it’s an unusual looking design, but what’s going on here from a technical point of view? 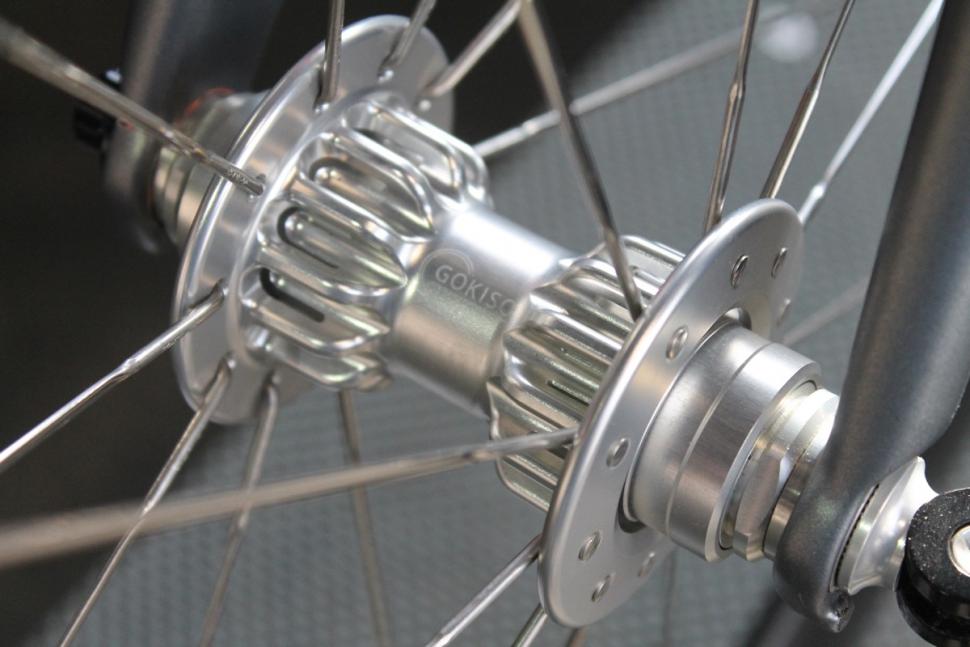 The hub bodies are made from titanium alloy (6Al-4V), the front one coming with 16 fins – Gokiso calls them fingers – at either end connecting the flange to the central cylinder. The fingers are attached to the main body of the hub only at one end. Check out the cross sectional view and you’ll get the idea. 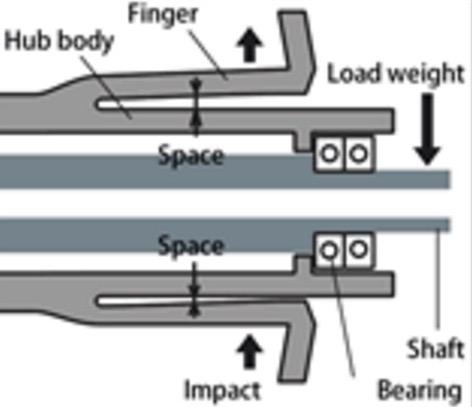 The idea is that when the hub receives external stresses the fingers deform to absorb the force. In other words, the axle is suspended.

The rear hub body is partially thin to function as an elastic structure.

“The super climber model has the elastic body suspension structure on the perimeter of the hub body to absorb the impact load from a road surface,” says Gokiso. “Moreover, since the elastic body structure floats flanges from body shell, the external input from the rim and spokes do not reach a bearing directly.” 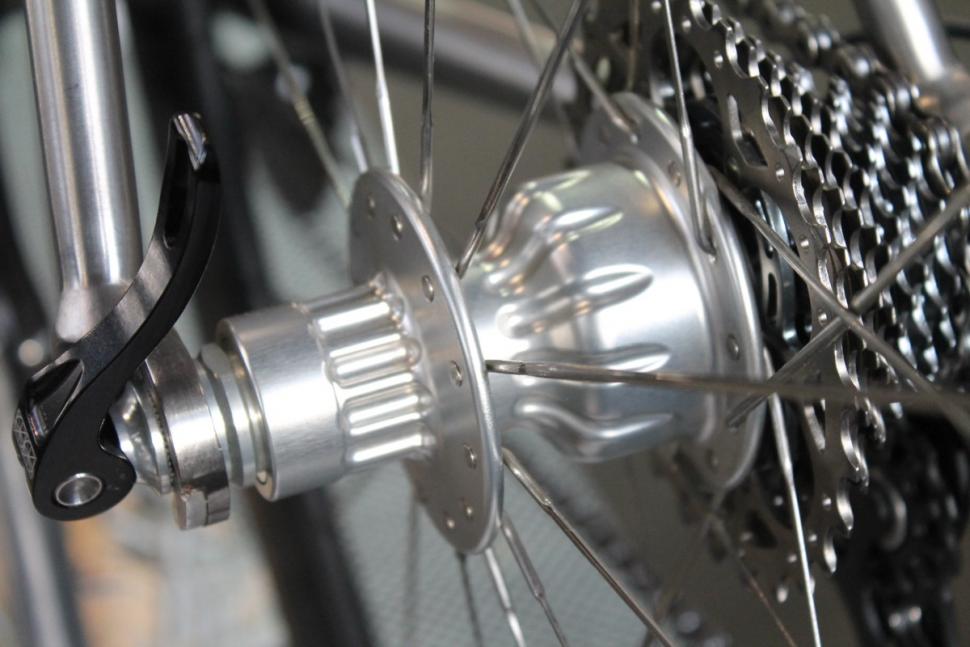 The design isn’t intended to cushion the ride, it’s intended to keep the axle perfectly straight under any force so the bearings can operate with the minimum of friction.

Mudguards first. The VEC/001 mudguard is an elegant aluminium and steel affair. The guard itself is aluminium which Primarius make themselves on their own rolling machine, while its stays are steel. The clever bit is how it fits to the bike. The guard attaches to the frame via  magnets in the brake bridge and on top of the guard. The mudguard's stays don’t attach directly to the frame at all. Instead, they slide neatly through the quick release skewer, also made by Primarius. The idea is that you can swap out the entire wheel and mudguard in one go to turn your weekday commuter into a more sporty weekend bike. The system was best displayed at the show on the Elian. 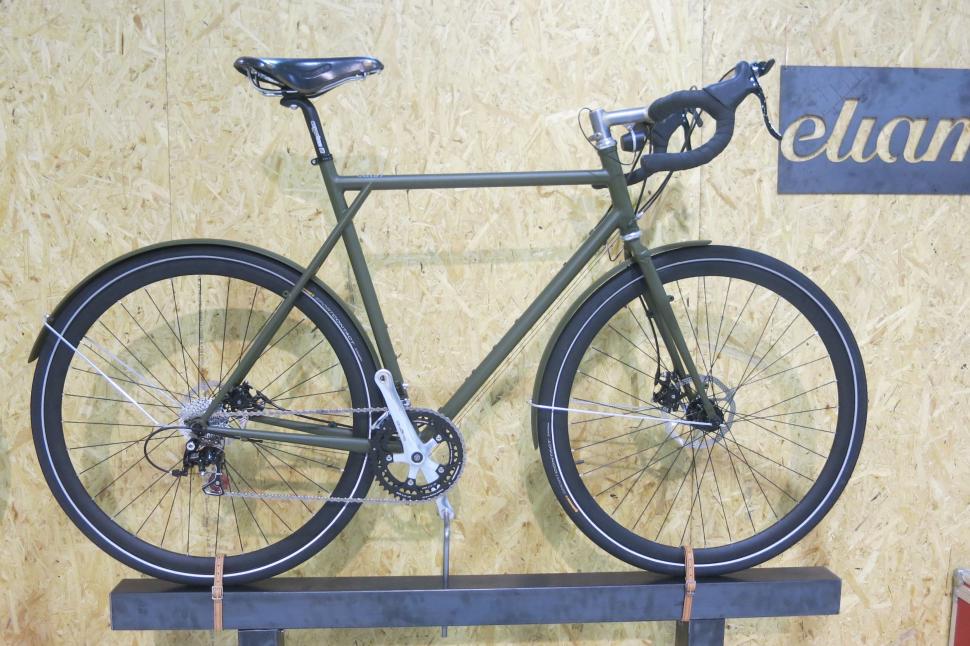 Primarius' VEC/004 light system was equally neat. The lights themselves are made from a combo of 6081 T6 aluminium and steel. You can either have them as a 6V 3W dynamo set up or powered by a 5V battery. Primarius is marketing its new line of components under a specially created sub-brand Veloccomponents.cc and are hoping to sell them to other custom builders looking for a neat integrated solution for their custom frames. 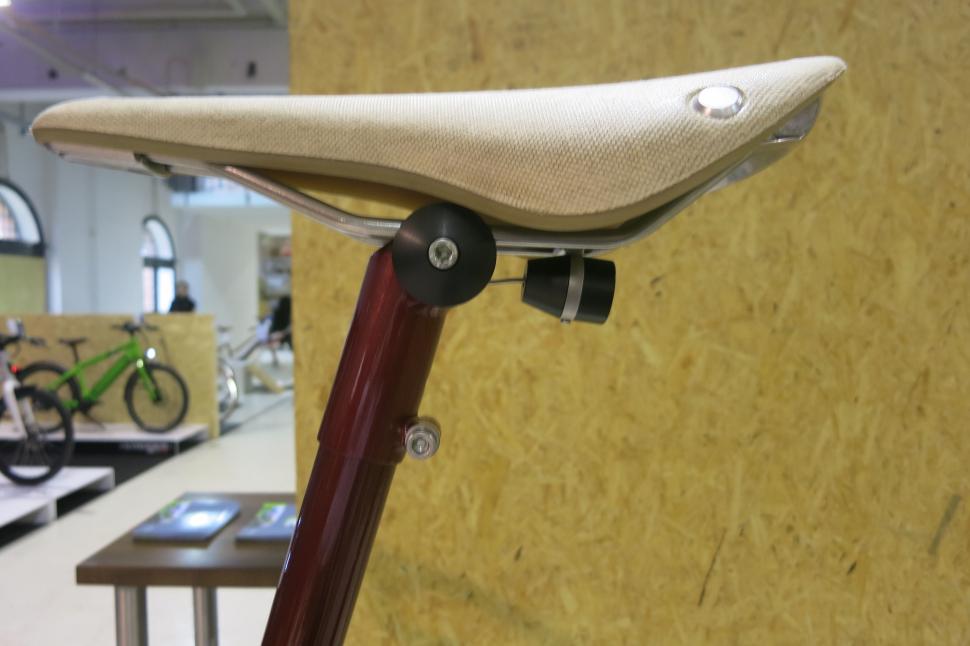 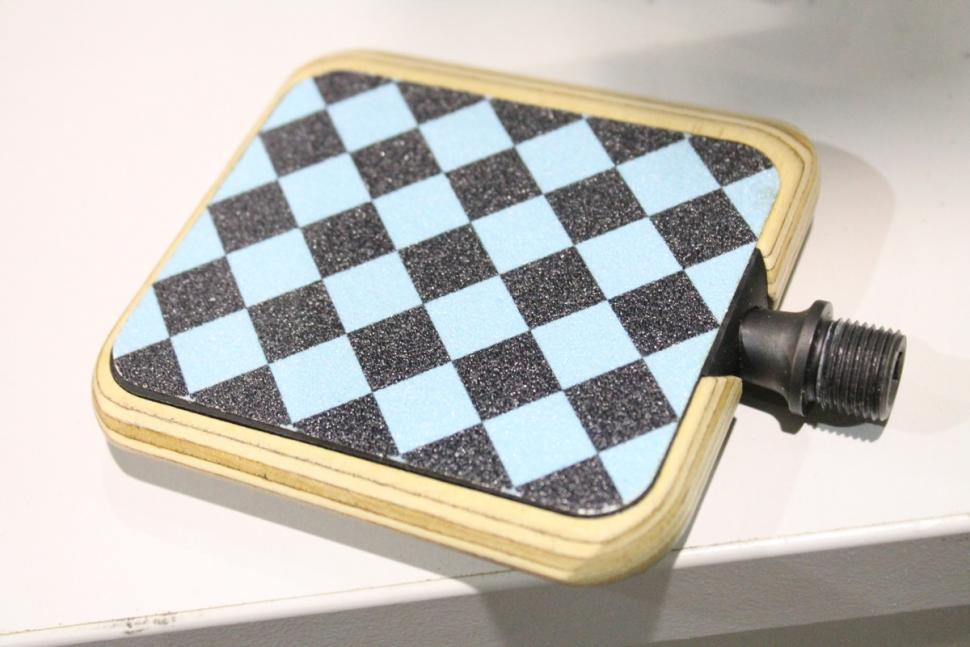 Moto platform pedals, designed for urban use, are interesting in that they do away with pins and complicated shaping and use griptape pads to keep your feet in place. We particularly like the road.cc-esque chequers pattern. 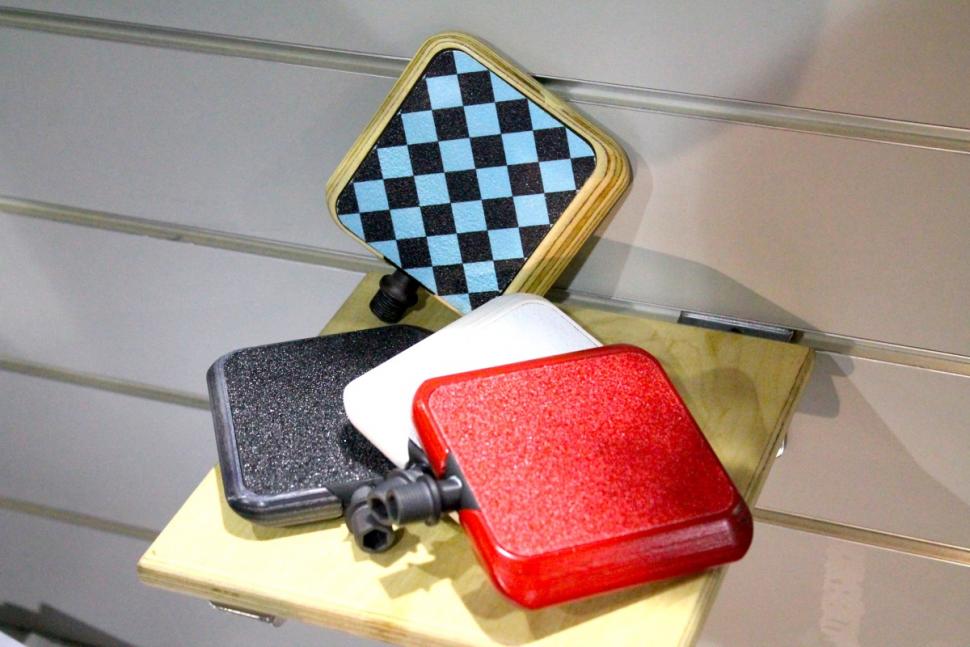 Both pedals are large, the platforms measuring 9.2cm x 7.6cm, and they’re thin, measuring just 15mm from one side to the other, so stack heights are very low.

The reflective elements of the Reflex pedal come in various different colours. 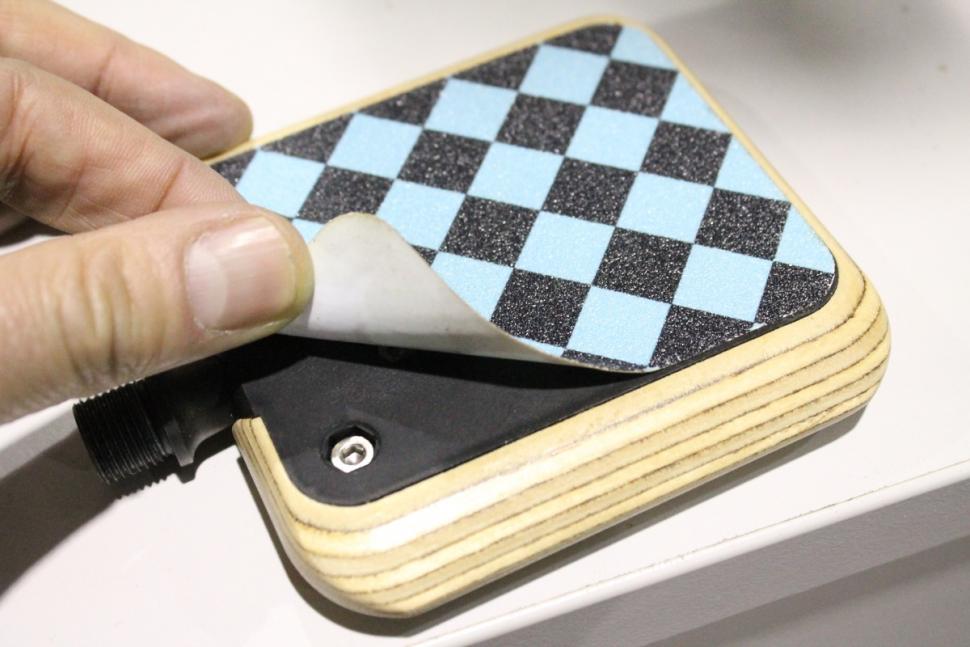 The grip tape can be replaced easily when it wears out, new pads costing from €7.50. 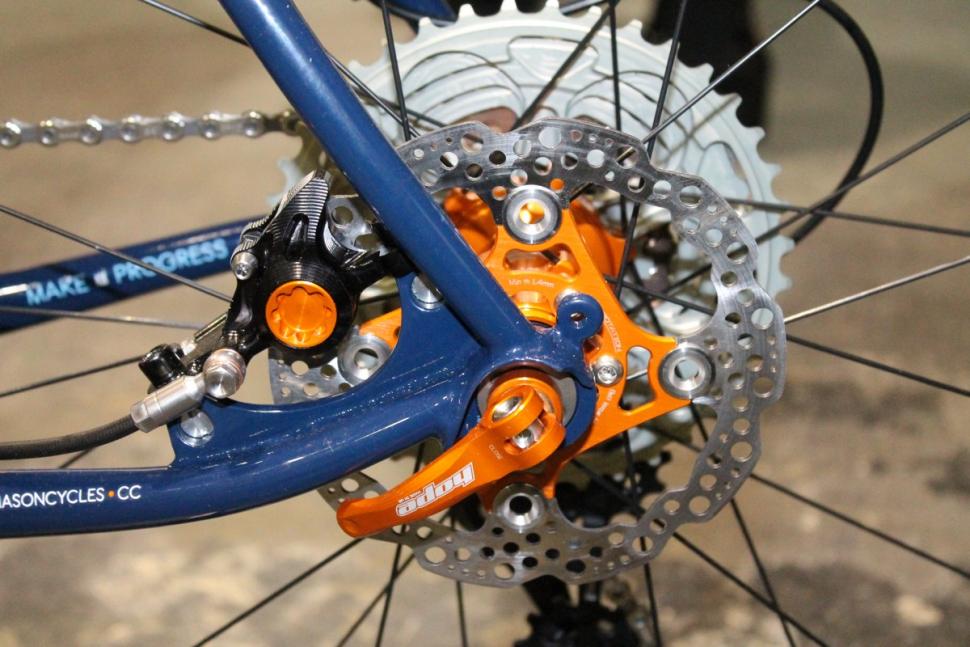 This bike uses a 1x system. In other words, it has a single chainring (so there’s no front derailleur) and a wide-ranging cassette.

You can’t buy Hope callipers and SRAM levers as a complete system, but you can buy the parts separately. The wheels on this bike use Hope’s new 25mm-deep aluminium rim. It’s disc specific with no brake track and will be available soon, as will a carbon version. 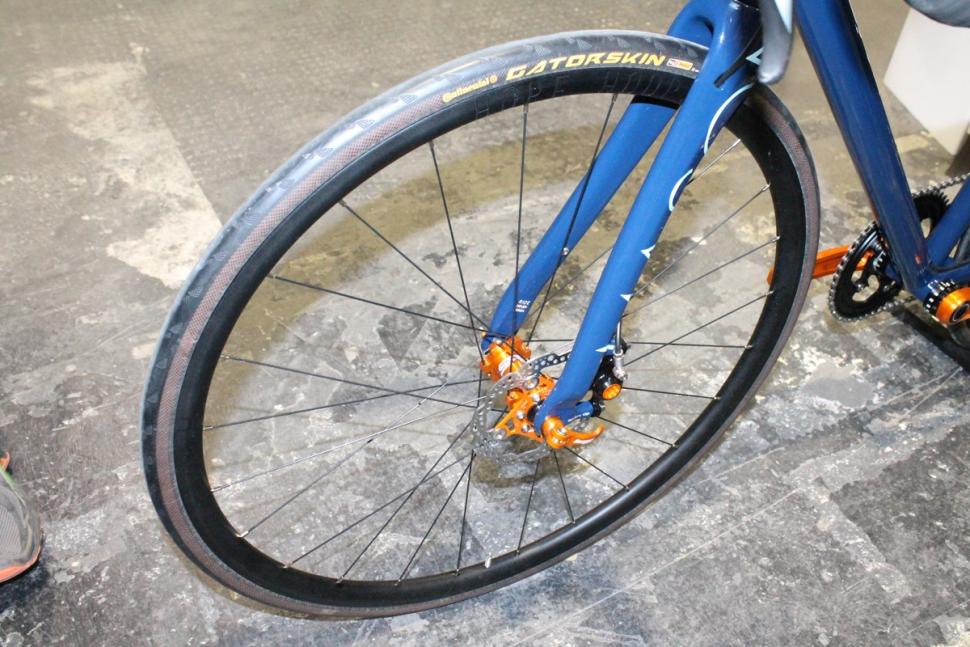 Even more interesting is that Hope has revealed it is working on road-specific disc brakes that will probably see the light of day in 2017. They’re likely to be four pot, and Hope says that it might do a version that uses mineral oil brake fluid for use with Shimano systems and a SRAM-friendly DOT version, or it might come up with a design that’s adaptable to both. That’s all to be decided, but we can tell you for sure that Hope is working on it, so watch this space for more details over coming months.