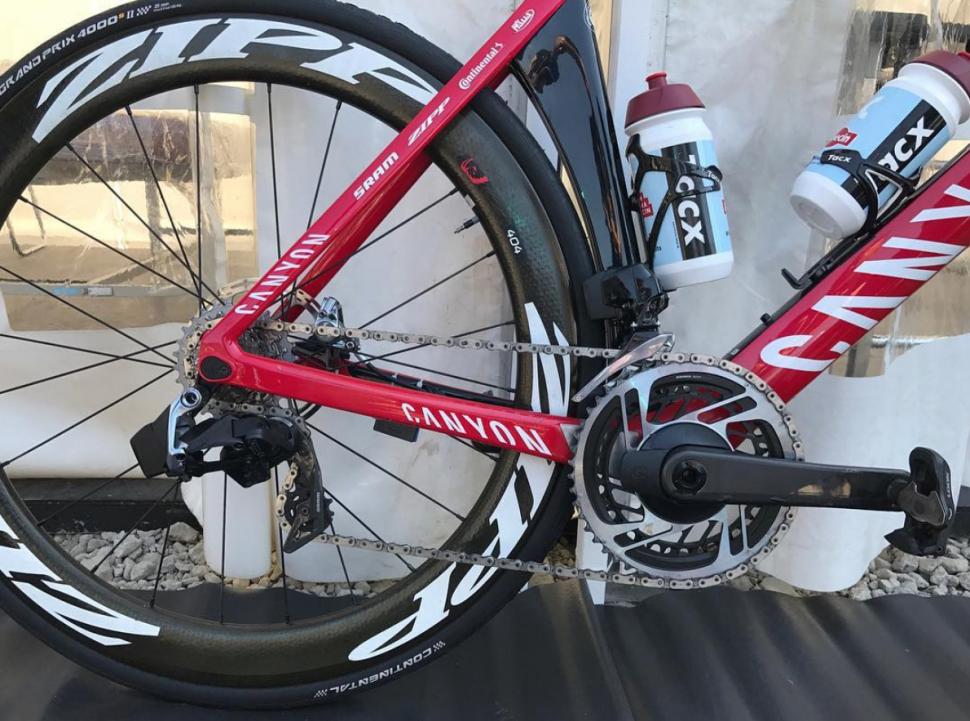 Could we be close to seeing SRAM’s wireless groupset get an extra sprocket?
by roadcc staff

Since the advent of smartphones and social media, it’s become nigh-on impossible to keep things secret. Over the last couple of days, we’ve seen photos shared on Instagram that provide the biggest indication yet that there’s a 12-speed SRAM Red eTap groupset in development.

SRAM’s Red eTap has been a hugely popular groupset in the high-end road market and a serious alternative to Shimano Dura-Ace and Campagnolo Record. The jump to 12-speed would be a natural progression and relatively easy to implement since it has already developed a 12-speed groupset for mountain bikers called Eagle.

- Is an SRAM eTap 1x12 groupset coming this year?

Eagle is a 1x12 groupset, however, the extra sprocket designed to get around the limitations imposed by taking away the front mech, with a huge 10-50t cassette. We’ve already seen photos of an eTap version of Eagle being raced by top XC mountain biker Nino Schurter, so the wireless tech is flowing into the mountain bike world. Could the same happen with 12-speed coming to SRAM’s road category?

If SRAM does come with a 12-speed road bike groupset, it won’t be the first. Campagnolo has that honour with its Record and Super Record groupsets launched this year.

Nothing at this stage, other than a couple of photos shared on Instagram that clearly show a familiar eTap rear mech combined with a 12-speed cassette.

While SRAM has been driving forward with 1x groupsets, this new 12-speed groupset is still built around a 2x setup. There’s the familiar eTap front mech but definitely new is the crankset and chainrings. We can spot a Quarq logo so we’re guessing this is a brand new power meter crankset that has been developed to try and own a bigger slice of that market.

The components all look of production level quality suggesting they are well past the early prototype stage. The parts are also attached to a Katusha Canyon race bike suggesting that they’re in the phase of product development when it’s off to races for valuable feedback from the pros.

SRAM, like most manufacturers, is typically coy when asked about the development of new products. SRAM was pretty open with the original eTap though, it was seen in public on AG2R race bikes for a full year, with no attempt to hide it, before it went on sale.

What we don’t know

Release dates, price and cassette options are all a mystery at this stage. The Tour de France is a big date in the calendar for a potential release but it could do something sooner, with Sea Otter a big launch in the early season but with a more mountain bike focus. Big trade shows like Eurobike and Interbike have lost their attraction for big product launches, brands preferring to do their own thing for a bigger impact.

Will there just be a 2x option or, in the light of being the first 1x groupset used in the pro peloton (SRAM Force on Aqua Blue Sport 3T Strada bikes) or is it sticking to 2x given the dominance of 2x in pro racing and the wider market.

What do you want to see?

What would you like to see from SRAM’s next version of Red eTap? I know a lot of people are wondering where the Force eTap groupset is, and that’s a really good question.

But it hasn’t been quick to bring out a wireless Force groupset. Could it be that SRAM wants to keep it as a premium groupset? Is the technology difficult to implement at lower prices? We just don’t know, but we do reckon a wireless Force would have the potential to help SRAM break into Shimano’s utter dominance with Ultegra in the mid-range market.

(We fully expect these pictures on Instagram to get taken down soon.)