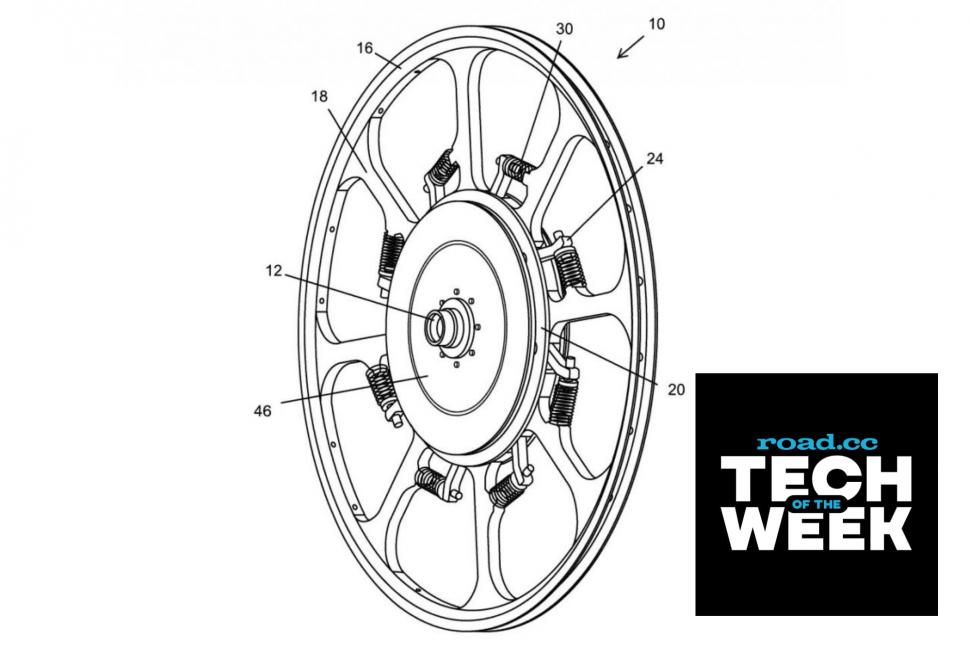 SuperWheel Tech of the week

Here are this week’s tech highlights including a deeper look at a wheel that's said to turn your weight in the saddle into forward movement, news about Hunt’s lightweight Alloy SL Disc wheels, Colnago’s TT1 speed weapon that’s also sporting some prototype Campagnolo components, La Passione’s jerseys, Koo’s sunnies, and more. As always, there are some stunning custom finishes to check out too…

“Pedal assistance without a battery” – but does the SuperWheel REALLY work?

The SuperWheel – which we reported on the road.cc Live Blog months ago – has been doing the rounds in the media again, which prompted us to get a scientist involved to check out the claims surrounding it.

“Can this spring-powered bicycle ‘SuperWheel’ work on cars to save gas?” MotorBiscuit asked earlier in the week, while Designboom reported that “Spring-powered ‘SuperWheel’ prototype converts cyclist's weight into propulsion”.

If you’re not up to speed with SuperWheel, the idea is that you can “transform your bike to a high-performance bicycle... and experience the freedom of Easy Cycling without the range and speed limit of an electric bike”, according to the claims.

“This is the new way of pedal assistance without a battery,” says the inventor. “SuperWheel is the practical and convenient alternative to the electric power assistance. Whether you are a city commuter or simply for recreational use, the SuperWheel provides you with the additional power for easy cycling and allows you to enjoy cycling without the hard work.

“Superwheel is a bicycle wheel with a built-in power assistance system, using our patent-pending (WTECT) weight (mass) to energy conversion technology [to] transform the user’s weight to turning power during rotation to improve cycling efficiency.”

The patent does now exist.

SuperWheel claims an efficiency improvement of more than 30% compared with a standard wheel.

This video explains how it’s said to work:

Rather than relying on our own assessment, we asked Dr Robert Kelly, a science teacher at Okehampton College with a PhD in physics, what he thought.

“There’s nothing of merit in this,” he said. “My initial scepticism is only heightened by the lack of any proper explanation.

“Essentially, it looks like they’re saying that due to compression of the springs at the top of the wheel due to the rider’s weight, followed by a decompression as the wheel undergoes its first revolution, there is an extra force that is converted to forward motion.

“That’s fine on first push off if you got the technique right, but once the wheel is in motion there simply cannot be any continuous gain.

“If a rider was to then effectively reduce his/her weight on the bike, effectively doing a little jump to lift off the pedals and back down again, you could benefit from the push effect again, but in stable, level riding there’s no gain here.

“It may be that on riding over hills there is a little ‘bounce’ that happens as you push down on the pedals, so there could be some small continuous gain uphill – but probably only for riders who pedal inefficiently.

“The 30% energy recovery or equivalent to an e-bike claims must just be wildly exaggerated.”

Chapter 2 has begun collaborating with artists for stunning finishes...

Chapter 2 has kicked off its new Artist Edition Collection with this absolutely stunning Caitlin Fielder Artist Edition TOA that pays tribute to the brand’s and artist’s New Zealand roots with the use of the symbol of the native silver fern. 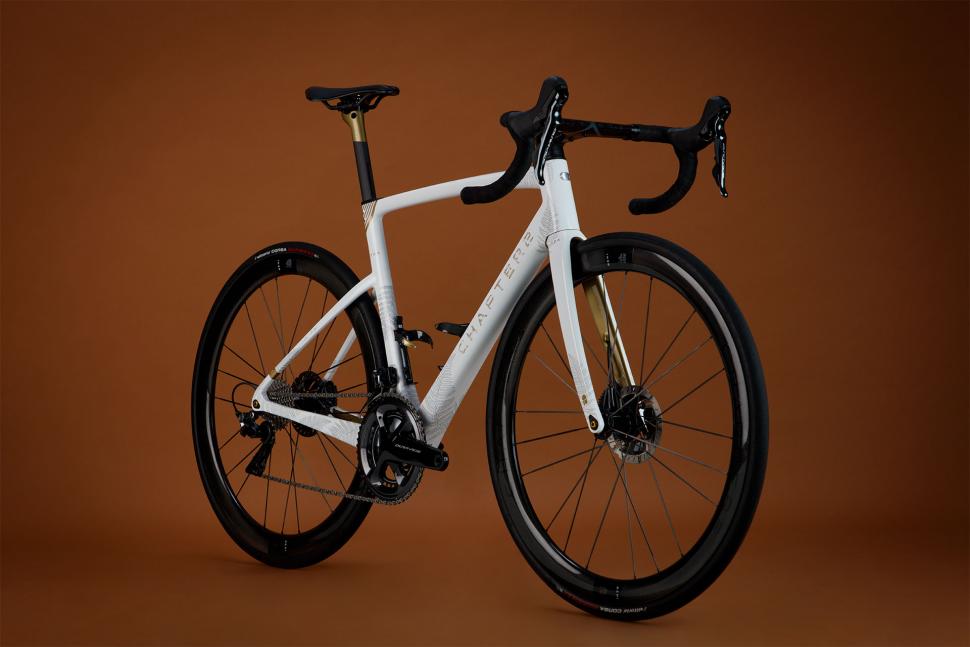 Caitlin has been painting for many years and recently turned her attention to doing fully customised cycling shoe painting for some of the world’s top pros, including New Zealand's UAE Team Emirates rider George Bennett. Other custom projects have included shoes for Michael "Bling" Matthews, Daryl Impey, Luke Durbridge and Esteban Chaves. You can check out Caitlin's work over here...

“Caitlin sourced real ferns in the Abel Tasman National Park, cutting them out and applying them to a 3-dimensional collage on the frameset,” Chapter 2 explains. 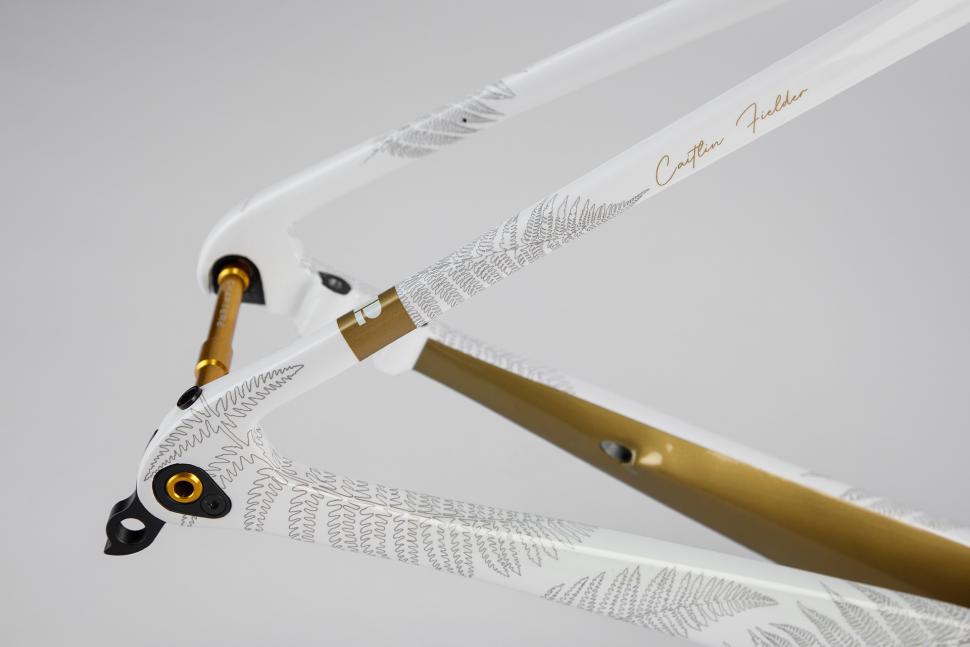 Only 50 will be made available worldwide with each frameset coming with a personalised signed certificate of authentication, and gold detailed matching thru-axles, top cap and carbon bottle cages.

Available via authorised dealers and via Chapter 2’s website, pre-orders for this exclusive arty creation end on 13 June with framesets expected to be delivered in September 2022

Hunt has expanded its range with new Alloy SL Disc wheels that are designed to be lightweight and responsive at a reasonable price. 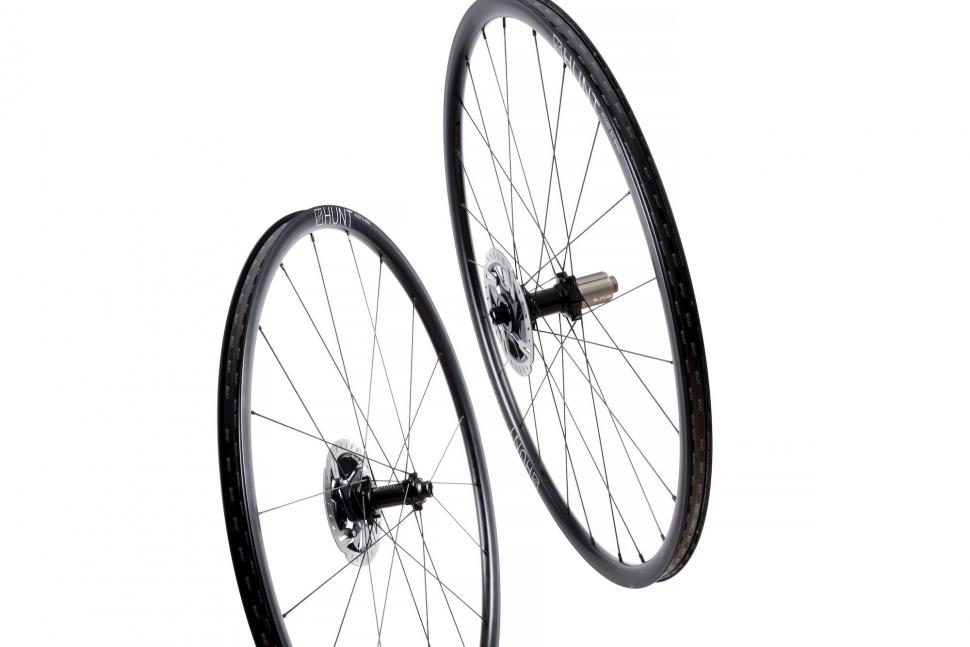 "They're asymmetric and V-shaped in profile, which remains the best option when strength and weight are the priorities," says Hunt. 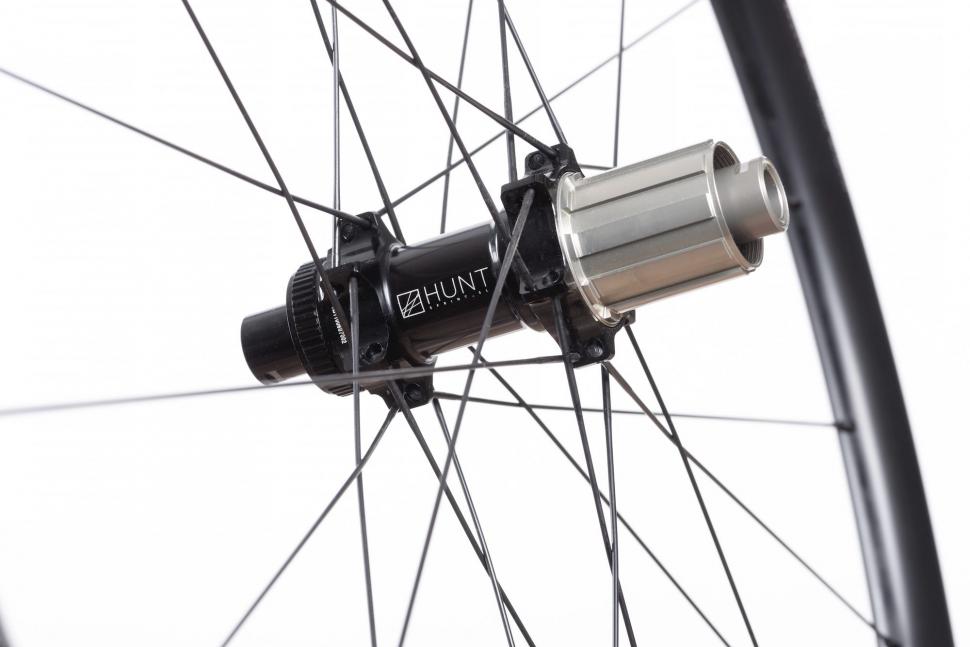 The rims are tubeless-ready and are laced with triple-butted, straight-pull spokes to Hunt's Sprint SL hubs. The hub shells are made from 6066 heat-treated alloy and the rear wheel engages in 7.5°. 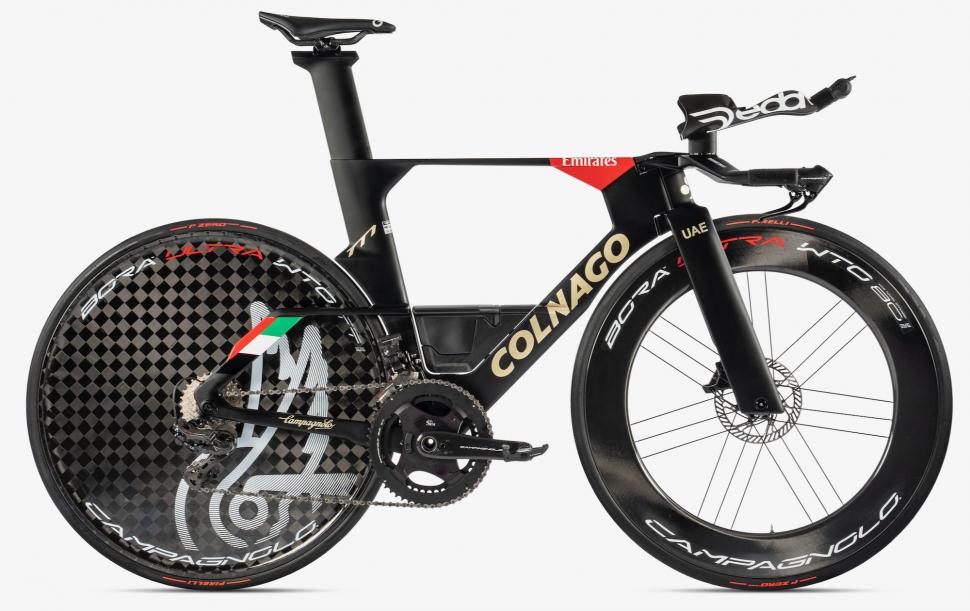 The TT1 is the first Colnago time trial bike to use disc brakes.

“The choice guarantees the best routing of the hydraulic hoses inside the frame with better braking performance and greater rigidity of the entire bicycle thanks to the use of thru-axles on the wheels,” says Colnago. “The weight difference [from the] K.One is minimal while delivering better overall braking performance and safety.” 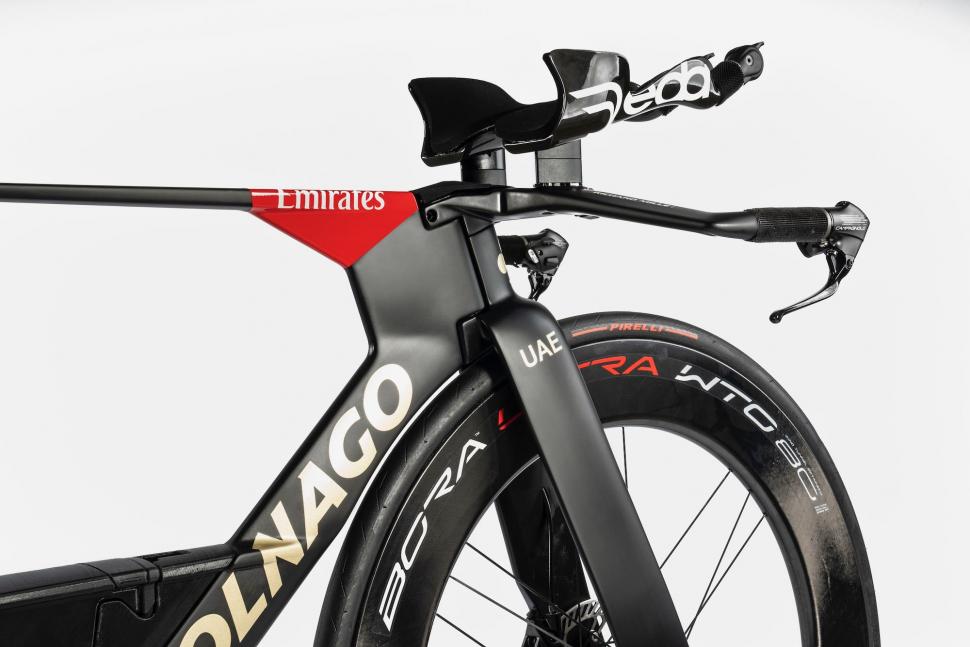 The Campagnolo brake lever controls are prototypes, as are the 80mm deep front wheel and rear disc wheel.

The TT1 uses a bayonet fork – the steerer is external – to reduce the frontal impact of the frame, and a monocoque carbon fibre base bar. 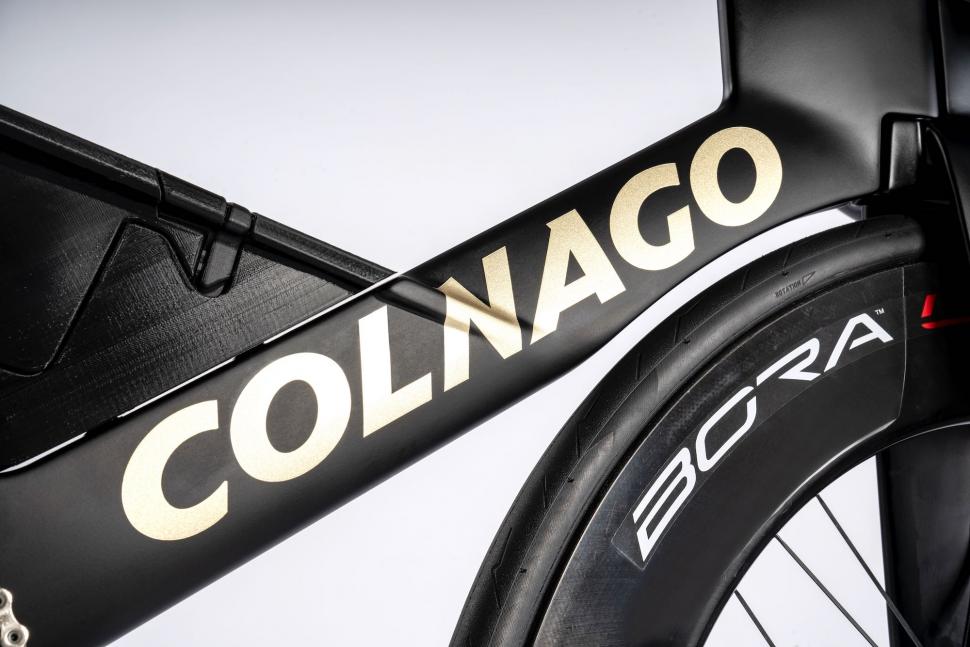 It also features a bottle holder and bottle kit incorporated into the aerodynamics of the entire frame. The 500ml bottle is still a 3D printed prototype and will be developed in collaboration with Elite. 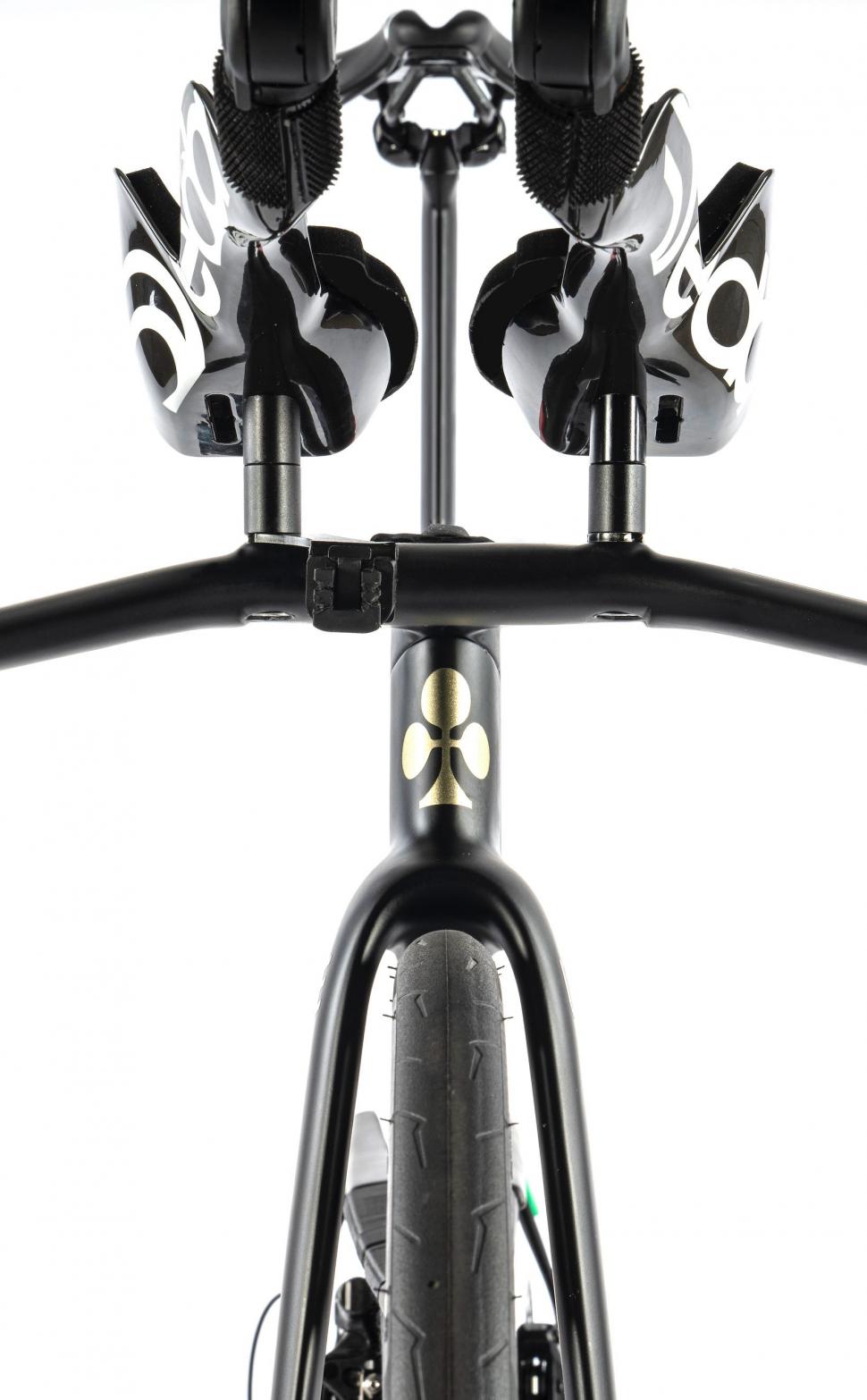 Colnago has gone for a very short head tube and a tall stack of spacers under each elbow rest to get the correct riding position. It says that this approach offers less drag than “a more voluminous frame”. 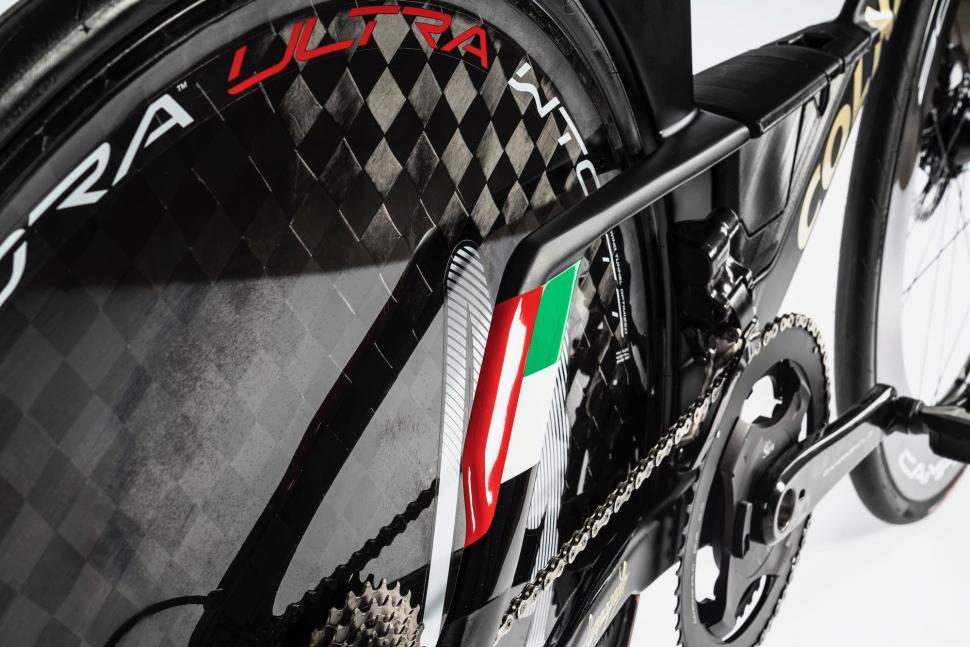 The top tube is horizontal, as are the seatstays along half of their length before kinking down towards the dropouts.

Colnago says that the TT1, designed exclusively for electronic groupsets, will be modified further before going on sale to the public in autumn 2022. 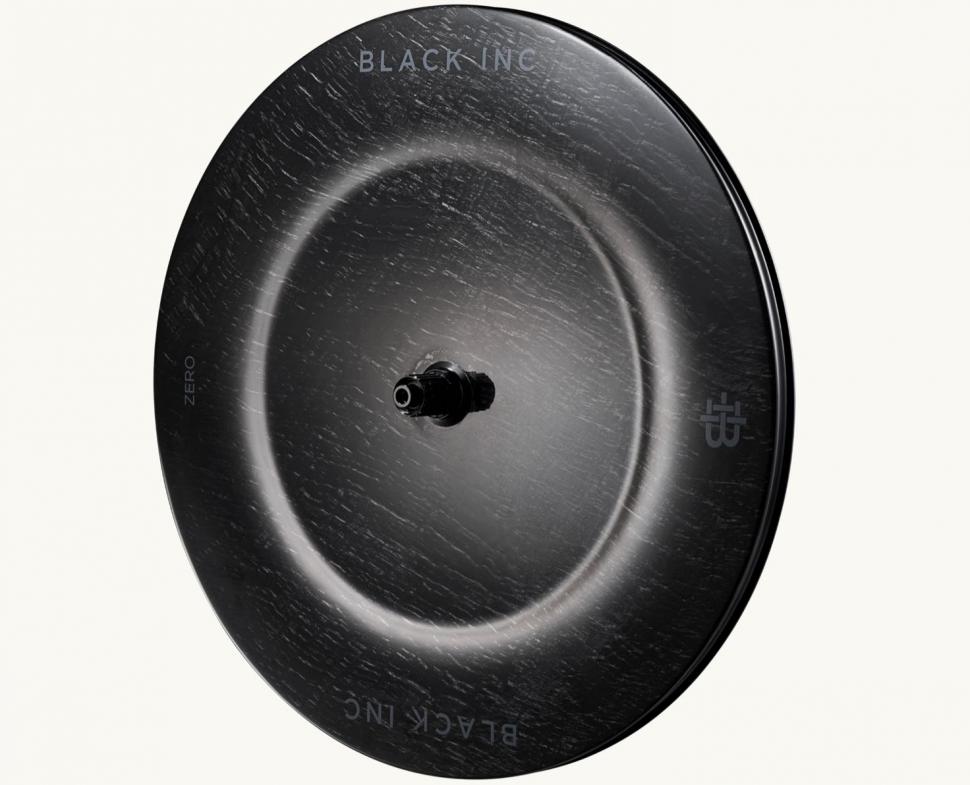 Sticking with time trialling, Black Inc has launched its new carbon fibre Zero disc wheel which is set to make its debut on Stage 2 of the Giro d’Italia after the testing of three prototypes over the past year.

Black Inc says that the Zero’s lenticular (curved face) shape is key to its performance. 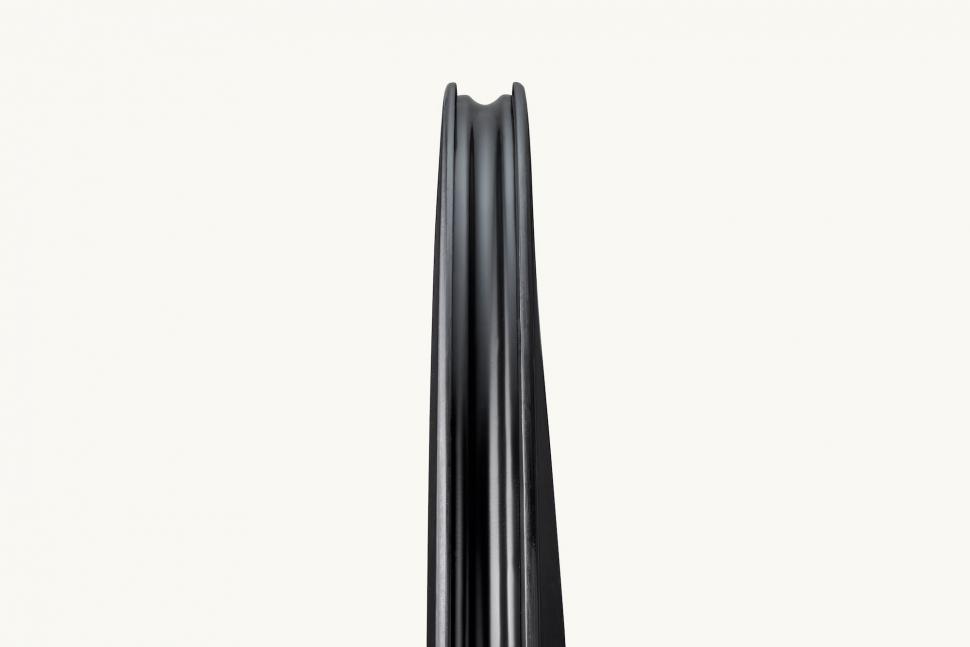 "The wheel’s drive side utilises a ‘virtual 100mm rim’ design with a striking flat centre section to allow the uninhibited operation of the bike’s rear transmission," says Black Inc. "The non-drive side, meanwhile, pushes the boundaries of wheel aerodynamics with a lenticular disc profile that challenges industry conventions on design and manufacturing."

Black Inc says that the shape "has been proven to generate as much as 20 watts of ‘thrust’ for the rider when fully sailing at yaw".

The Zero has a tubeless-compatible rim with a 21mm inner width and is aerodynamically optimised for a 26.2mm tyre. The claimed weight is 1,188g.

What do you reckon to La Passione’s new jerseys? 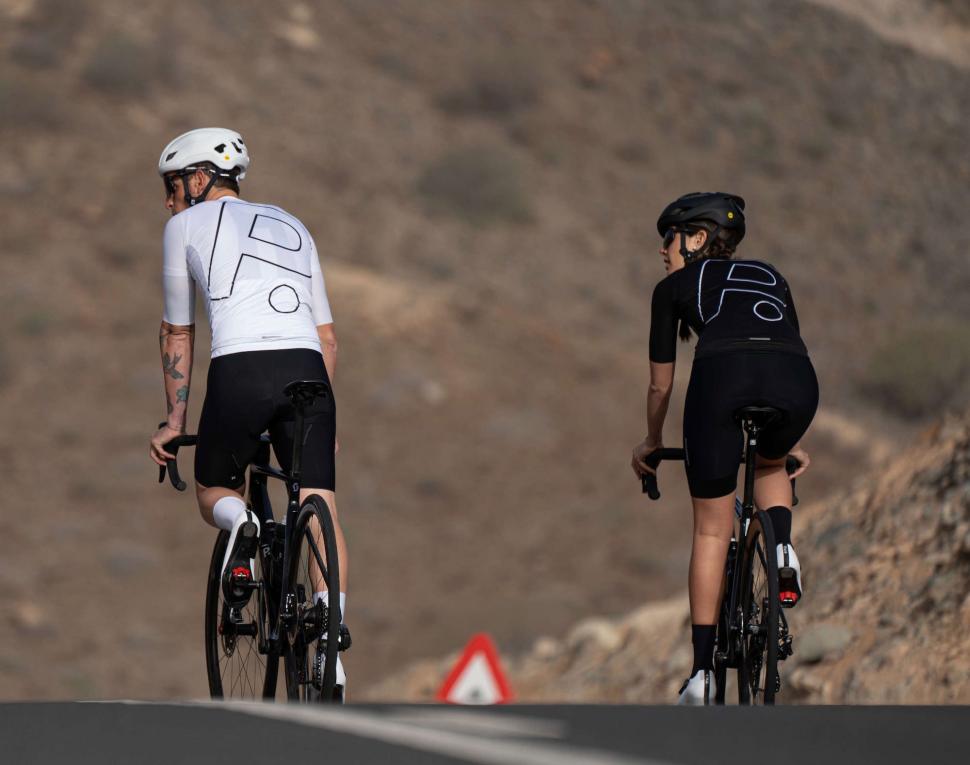 Our favourite design from the Signature collection is a "P dot" design that's available in white for men, and in black for both men and women. 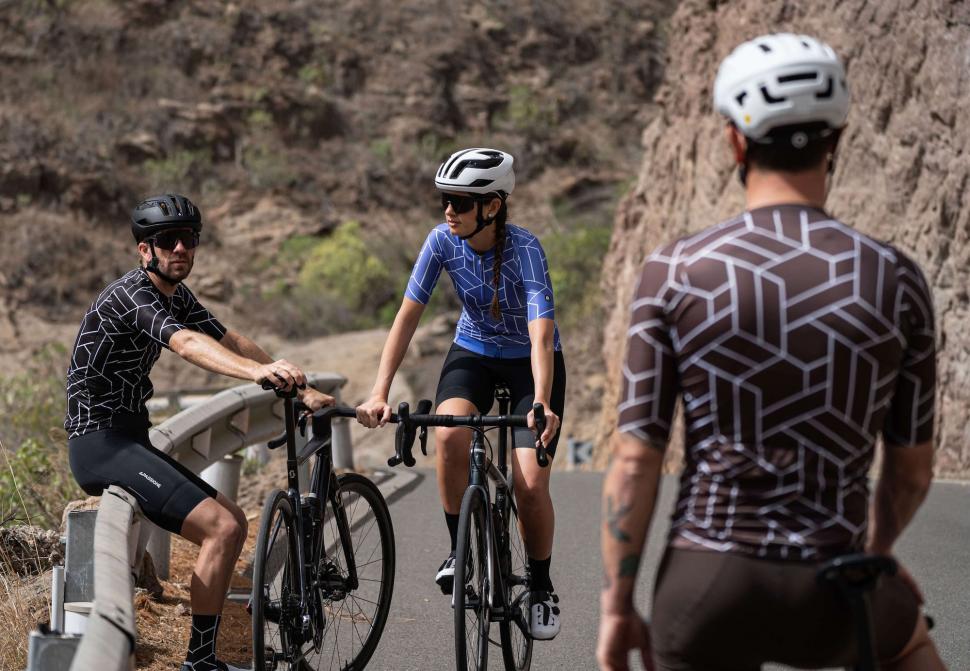 Brick is available in black, dark brown and violet. 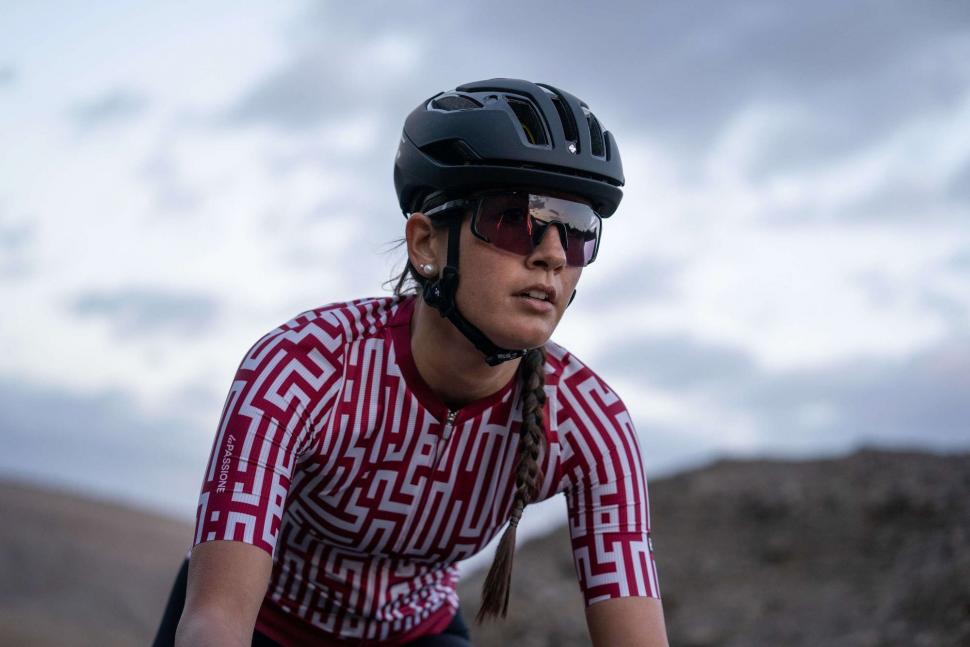 The Maze collection comes in black, pink and red. £96

All are made from fabrics designed to breathe well and they come with ventilated side panels.

All of these jerseys are priced at £96. 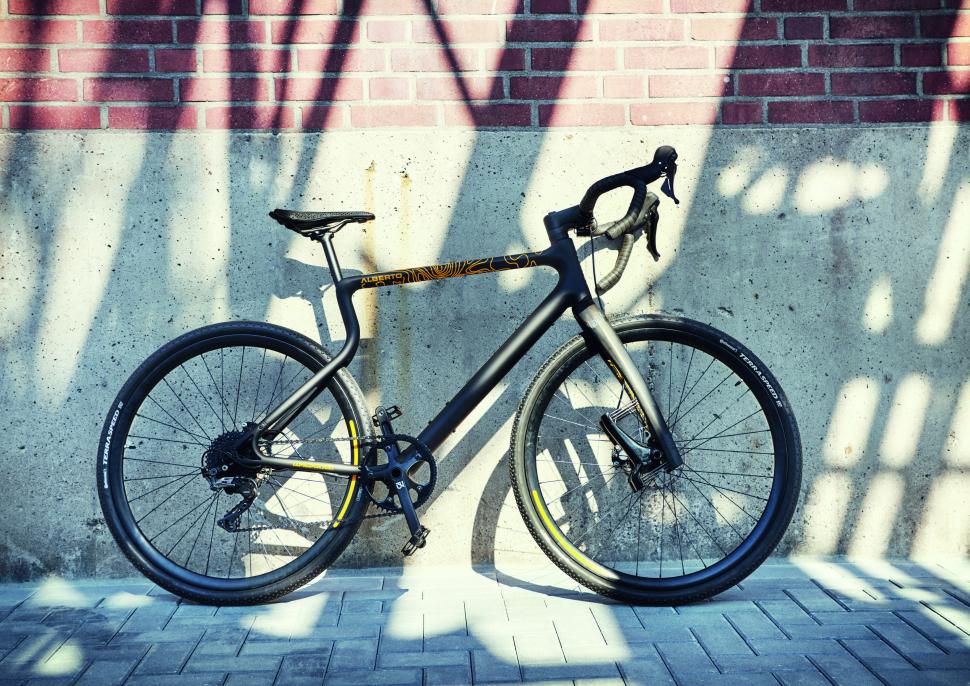 We're off to Germany next where Magdeburg-based bike manufacturer Urwahn has collaborated with Mönchengladbach (great name, Mönchengladbach) trouser label Alberto for a beautifully shaped special edition gravel e-bike that’s made of steel.

Mahle’s ebikemotion with 250 Wh battery provides a claimed range of up to 80 kilometres, and thanks to 3D printing technology this electric adventurer weighs just 14.8kg. A Lauf leaf spring fork is also included for additional riding comfort. 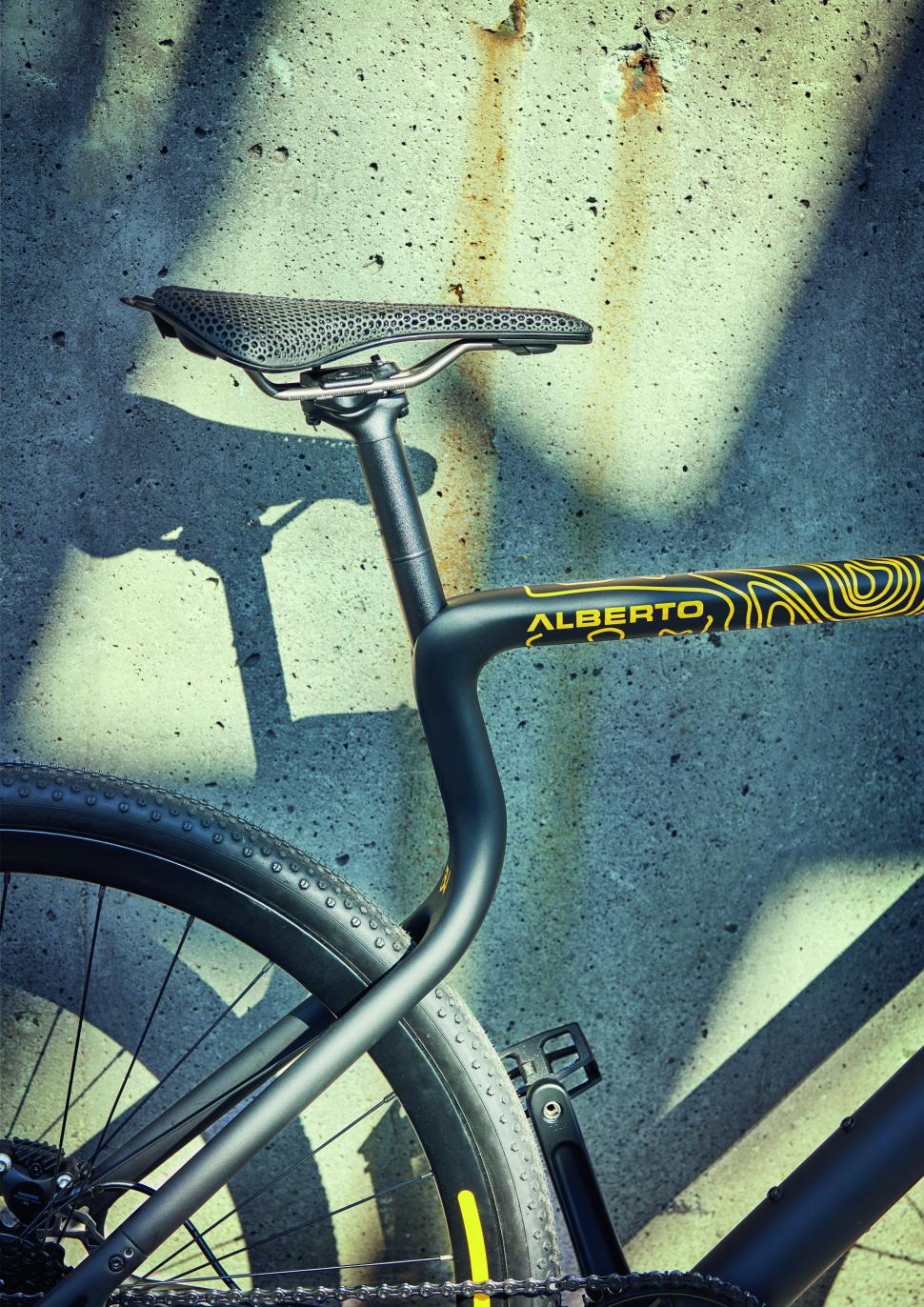 The asphalt-black matt finish features a graphic of the topography of Mönchengladbach, as well as Alberto’s founding date and location coordinates. What d'you think of this look?

Check out our review of Koo’s Supernova sunglasses

When we reviewed them, we found the Supernova glasses to be good looking, effective, and extremely light. They offer 100% UV Protection.

This unconventionally designed bike is missing a top tube, has a unique seat stay design and features a wide triple-crown fork system.

Triathlete took some shots on the ground of the tri bike Norwegian triathlete Kristian Blummenfelt has been riding which features this interesting-looking prototype frame from Cadex, which is Giant’s in-house wheel, handlebar, saddle and tyre brand.

The front wheel is Cadex’s prototype four-spoke wheel and the brand also supplies the disc on the back.

Do you know how many times pro cycling teams use each water bottle? Once. 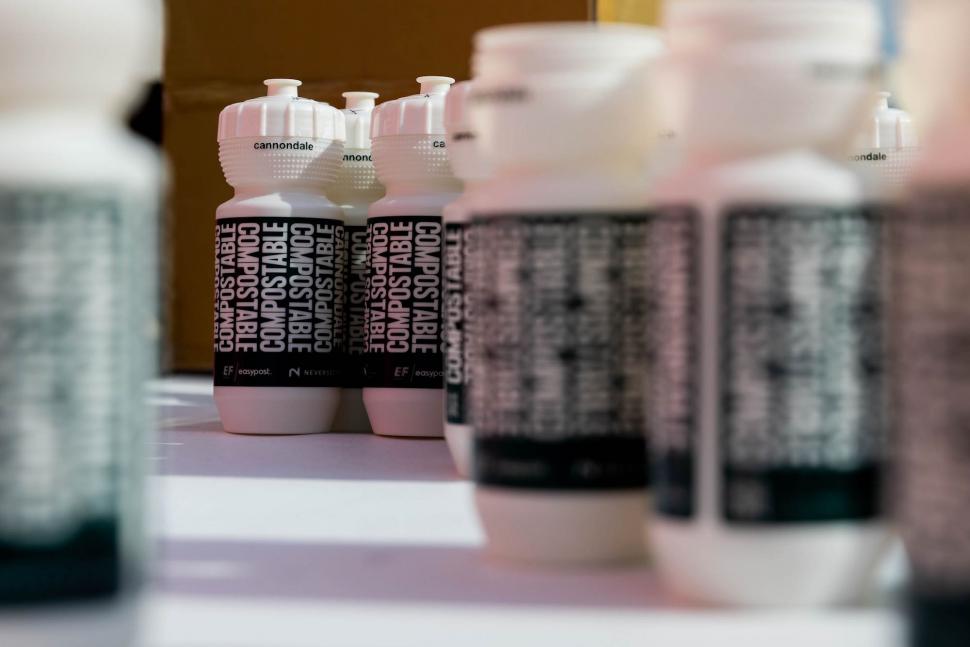 Whenever we’ve asked them why they’ve said that washing and reusing water bottles adds the possibility of passing germs around the team. Plus, giving the bottles away is a form of promotion. 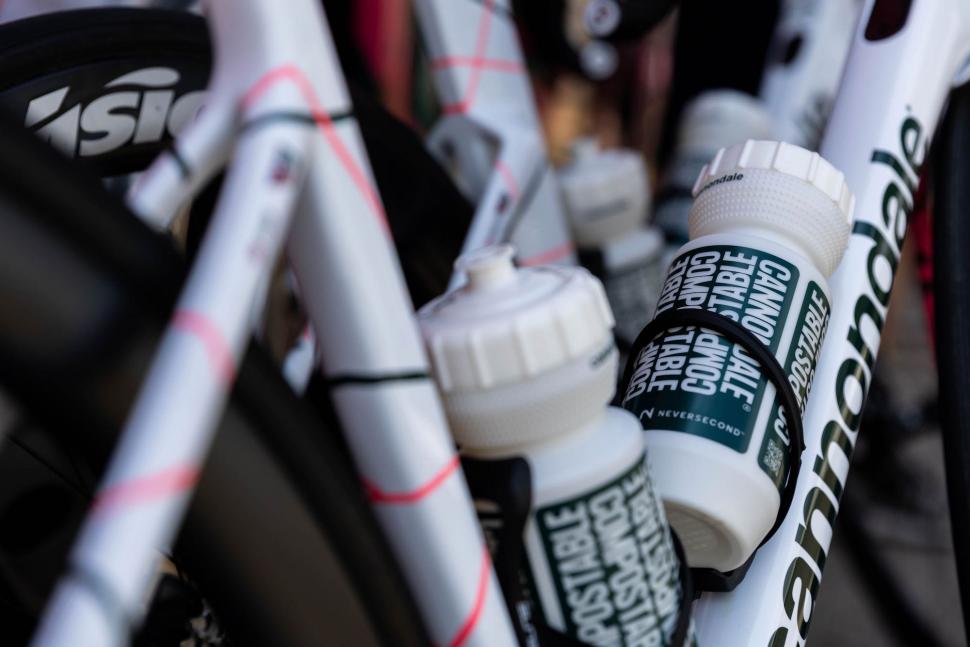 From now onwards, the Cannondale professional World Tour teams will be using a 100% compostable water bottle. It’s made from plant-derived materials and is free from plasticisers, heavy metals and BPAs (the industrial chemical bisphenol A). 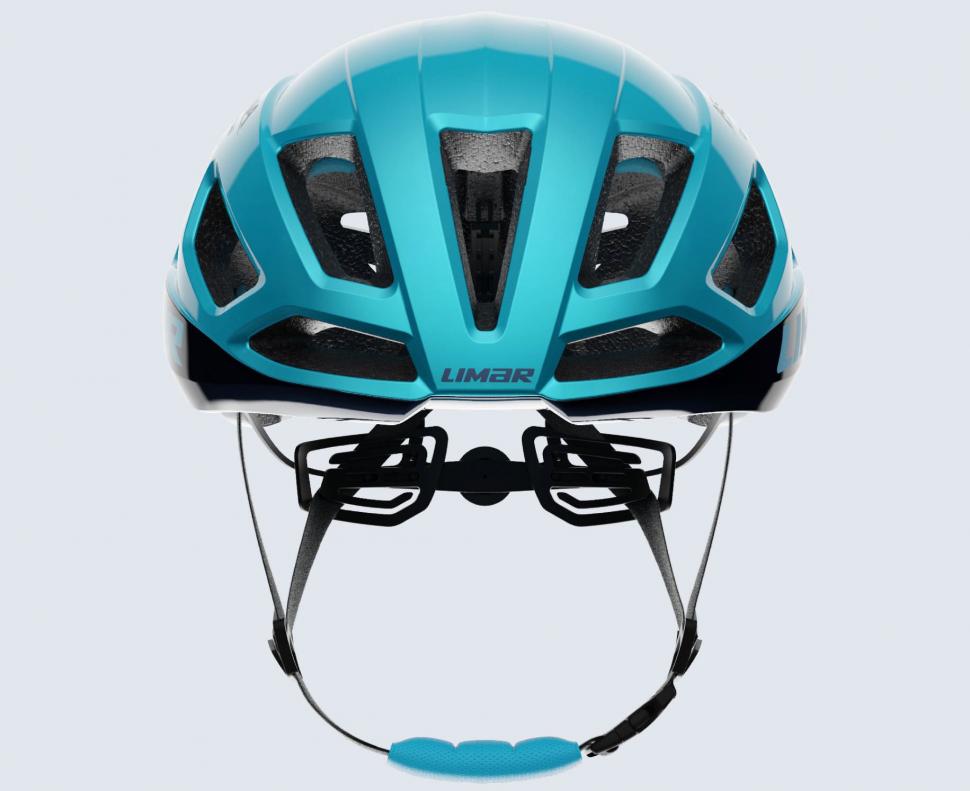 “New amazing and unique features will soon be revealed,” according to Limar, but it isn't giving out any details yet. 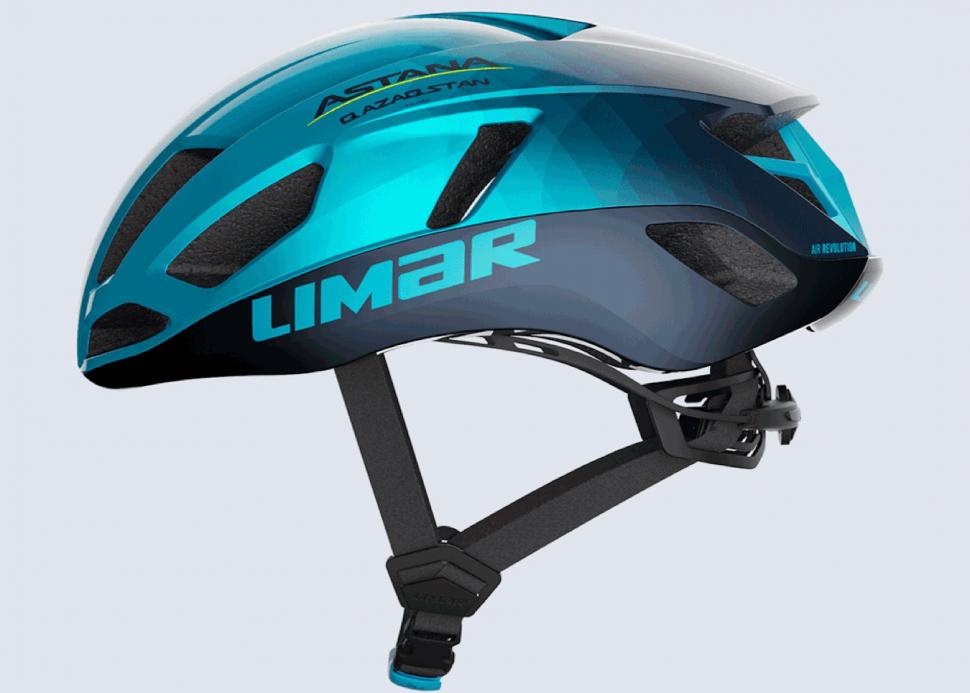 The Limar Air Atlas will be presented to international distributors at the beginning of June so we’ll have more news then.

SunGod is investing in grassroots cycling with Tekkerz CC partnership 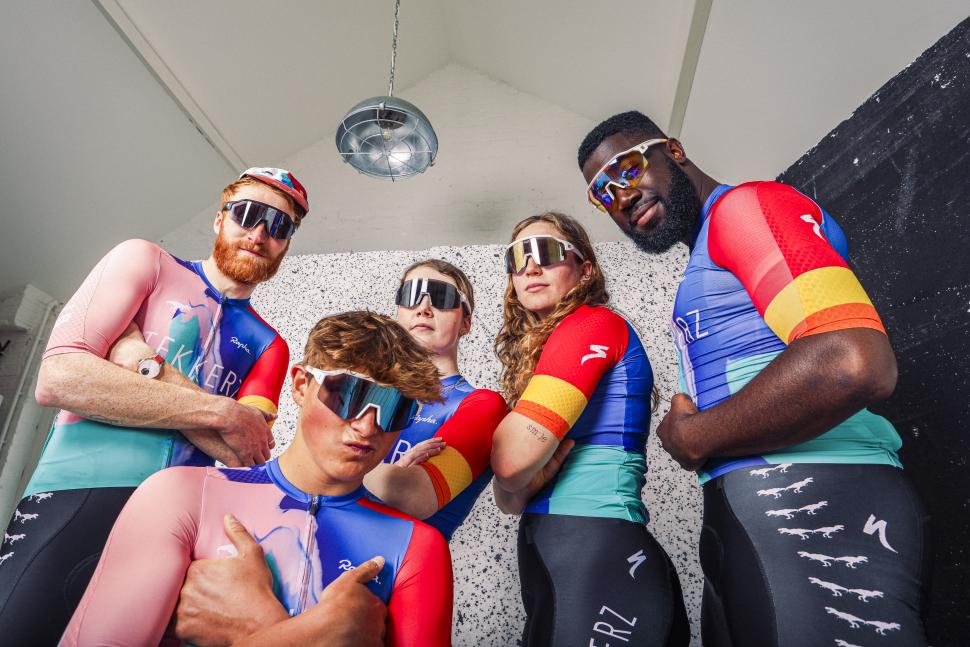 Founded by former elite crit cyclist, Alec Briggs, Tekkerz CC aims to combine top talent with the best up-and-coming younger riders to create a part-elite/part-development team that races in the Crit scene all over Europe.

A South Londoner born and bred, one of Alec's main aims with Tekkerz CC is to provide a pathway into racing for a younger generation that wouldn't normally have an entrance into the sport. Alec, alongside the team's sponsors, funds coaching, equipment and travel to help bring down some of the more expensive barriers that can stand in the way of bike-racing.

As a member of 1% For the Planet and aspiring B-Corp, SunGod’s says its mission is to “See Better; through their products, through their actions, and through doing business better”, as well as increase accessibility to the cycling world.

A limited-edition SunGod X Tekkerz product release is on the way this summer, so stay tuned for that.