It might only be 6.4km long, but the average gradient of 6.3% and 13% max ensure the Montecopiolo climb is one you won’t forget in a hurry. Apparently, according to the locals, it was one of Marco Pantani’s favourite training climbs, something which the organisers of the Giro d’Italia commemorated by including it in  stage 8 of this year’s race. It went down so well that they’re including it again next year, so we thought while we’re at the Hotel Belvedere in Riccione, we might as well mozy on over and take a look at. 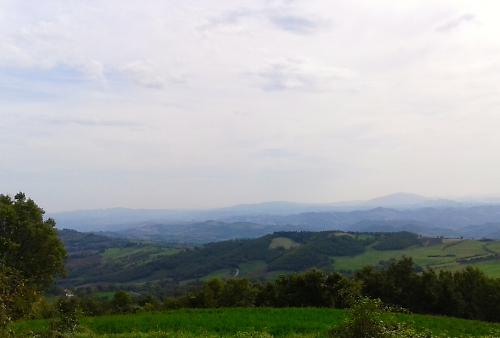 I can see why Pantani used it for training. It’s a horridly steep climb. Perfect for a pure climber to train on. I can picture him flying up it in his characteristic climbing style. Yes it’s short, well compared to some of the more inconic Italian climbs, but hidden in the wrinkles of its route up the hill are some really steep ramps. And when the insanely fit Italian tour guide tells you it's a tough climb, you know something special is in store.

Though not a climb that race can be won on, if last year’s race is anything to go by, Montecopiolo is a climb that a race can be lost on. You can lose a lot more than a race on it, as I found out today when we rode it. Tackle is an appropriate word, it’s not a climb you can glide up (unless you have the svelte build of Pantani) you have to wrestle your bike up the steepest parts.

The numbers don’t really paint the picture accurately. Even watching the highlights of this year’s race doesn’t do much to get across the sheer brutality of its gradient. It’s the way the road ramps up, levels off, ramps up… again and again it does this, each ramp taking its toll on your legs with increasing severity. I found myself pushing at the Campagnolo gear shifter hoping to find an extra low sprocket several times, to little avail. 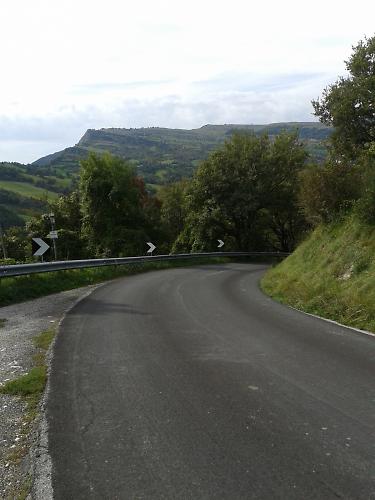 Oh and it doesn't just go up all the way. It also goes down in two places, so you lose a fair amount of hard-earned altitude. Though the brief respite from the hard pedalling is welcome. But your heart sinks as gravity takes over.

The view all the way up of the surrounding Marche region does provide some distraction. The landscape really is beautiful around these parts. I've been to some nice places in the world, but this place is right up there with the best. Though funnily enough there are some places that have some similarity with the UK. Okay so maybe you need to squint and use your imagination, just a little bit. But oh you won’t have much time to take in the views as the climb is so hard all your focus will be on the few metres of road ahead of you. And lots of looking at the stem. Oh lots of that. Move aside Froomey, you've got a new challenger. Did I mention it's a brute of a climb already? And the thing is, to even reach the beginning of the climb for us to meant climbing from 148m to over 800m in 33km, so ensuring you’ve depleted a fair amount of energy before you even get into the climb proper. Still, at least you're properly warmed up by the time you get there.

When you do you reach the top, there’s not really much to look at, at least compared to some of the other cracking climbs we've done this week. It’s a large car park for the ski lift that according to our guide hasn’t had much use in the past couple of years. Yup, this climb is all about... the climb. We stroll up to the cafe to find it shut. Disappointing, a coffee right now, maybe a slice of cake, would be a treat. So there is nothing else to do but pull on your gilet and head back down the climb. Which is certainly a hoot when there is no traffic to speak off, and the road is mostly very well surfaced. 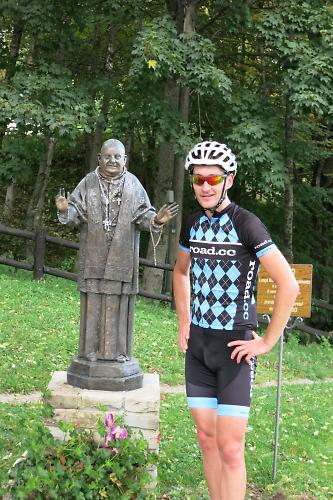 Oh I tell a lie, there is something at the top, this short chap who seems very friendly.

For the pros it’s a climb that provides a daunting challenge, and one in which the lead constantly changes. This year Lampre-Merida’s Diego Ulissi reigned supreme at the ski station finish line, but that was after attacks by Julian Arrendono, Pierre Rolland and Moreno Moser on the steep slopes.

Commenting after that victory, Diego Ulissi said: “The Carpegna was a real challenge, and it’s no coincidence that this was where Pantani came when he wanted to put himself to the test.”

It’s a short climb for the professionals. Wilco Kelderman posted a time of just over 15 minutes according to his Strava activity. Yeah, that's pretty rapid. And yes, I didn't get anywhere near it.

The other climb just over the other side of the hill is the Cippo di Carpegna which Pantani also used for training. We didn't ride it today, this one was enough, but we may do later this week if we get the chance.