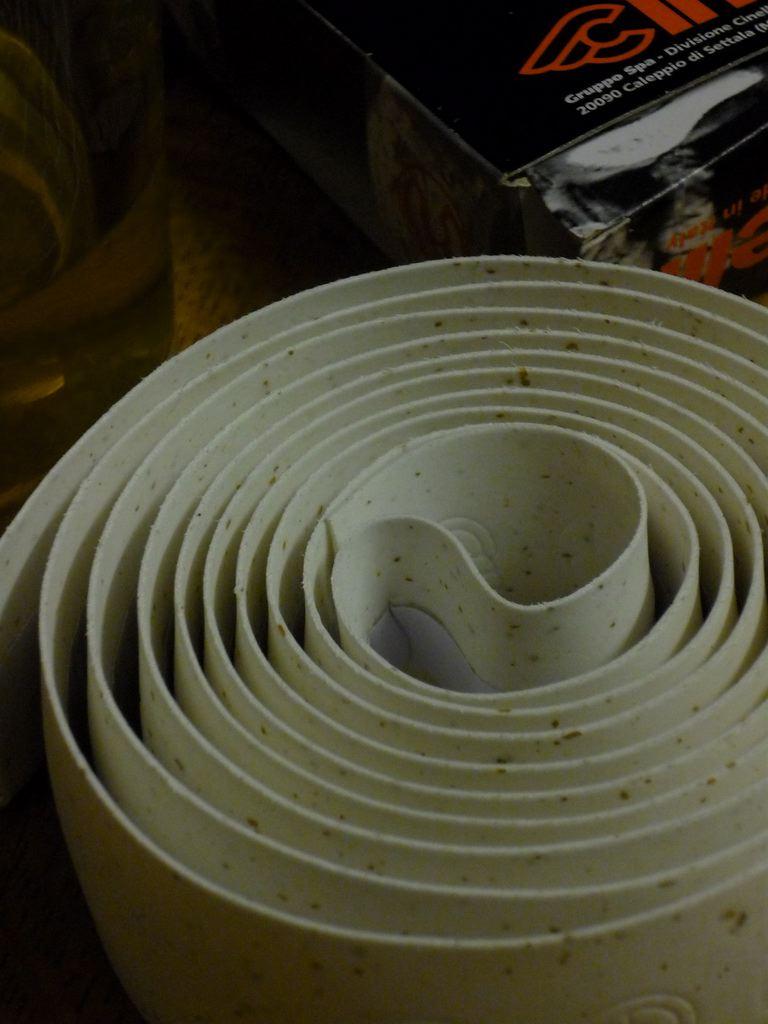 Kitchen, late, because it always feels wrong to tape the bars in daylight hours, needs quiet and the right songs on the radio, a couple of fingers of alcohol, just to calm the nerves, silent reverence but with an undercurrent of fear, after so many years it's still possible to get it horribly wrong.

Box of new tape, Cinelli Cork for preference, white for preference, no need for over-padded rubbish or any such gimmicks, although that Pro stuff with the embossed flowers was nice. Scissors, electrical tape to secure the strips behind the levers and finish off, the sticky-strip that comes in the box already thrown away, as always. Brake levers already double double checked they're at the right height and level, the hoods have been pulled back. Brake and gear cables are in place and taped. Bike in the workstand, begin.

Cut the strip that covers the brake-lever clamp to length and tape the ends in position. Pick up a roll of tape, if it's patterned with a logo check it will be the right way up when wound, stick a bit of electrical tape on the end to hold it on the bar at the 9 o'clock position, make sure there's enough overlap to hold the bar-plug in later. Wind anti-clockwise one full revolution straight to cover the end and then start the journey up the bar.

Even tension, not too slack, not too tight, took me enough baggy loops and some snapped tape in the early days to get that right. Keep the taught even and the overlaps regular and start to concentrate around the curve of the bar up to the brake lever. Always an evasive bit this, I favour the double-pass around the lever leaving a nice X of tape round the back, others will do it different. Get it not quite right first time so unravel a couple of turns and start again, concentrate on the tension and a slightly different path. Check all around the brake lever for sneaky gaps in the tape that could suddenly appear only when all is done like a dagger to the heart. Tricky transition over the top of the brake body and we're into the home straight along the tops, where the tape has to end already marked off by a strip of electrical tape, usually just a few mm from the outside edge of the handlebar graphic, its a bar-variable measurement.

On a new build the handlebar tape is the final step in the process, a nervous and exciting time, with added pressure not to wind the tape like a schmuck, no hurry, take it easy, breathe. The first ride can wait a while, embrace the anticipation, be as perfect as you can.
Today it's some new tape on some new bars. The tape needed to be changed anyway since the arrival of a white saddle, meaning white bar tape. Collar and cuffs, collar and cuffs.

Get to the finishing point and wind the tape another revolution so it forms a straight perpendicular edge to the bar and cut it off so the end is on the underside, for tidies sake, tack it down with the small section of tape that's been pre-cut and stuck to the stem for convenience. I've never got the hang, or had the guts to try bevelling the end of the handlebar tape to finish off, I have enough off-cuts, maybe I should practise. Reach for the roll of black electrical tape and wind it round the finished end. Start at the bottom, one revolution round, one revolution to travel it across the full width of a strip of tape, one revolution round, one revolution back across to the edge, one full revolution to end, cut the tape so it ends underneath the bar for tidies sake.

Some would say that being able to do your own bar-tape to a competent standard is one of the marks of being a cyclist, somewhere in between fixing punctures and building wheels. I can do punctures, I can't do wheels, I can do bar-tape and I'm certain I can do it better. I'd be happy to spend an hour watching a pro mechanic wrapping tape before the next days stage, watch and learn. I'd be stupidly proud to see a race won on tape I'd applied.

Take a couple of slugs of drink, to calm the nerves for the other side.

Cut the strip that covers the brake-lever clamp to size and tape it in position. Pick up a roll of tape, if it's patterned with a logo check it will be the right way up when wound, stick a bit of electrical tape on the end to hold it on the bar at the 3 o'clock position, make sure there's enough overlap to hold the bar-plug in, wind clockwise. All fingers and thumbs but I have over-compensating mechanisms and it's probably executed neater than the right-hand side. Finish off, job done. Pop the end-plugs in, already wrapped with a few rounds of electrical tape to make them stop tighter, make sure the logo is square. Of course.

Lean the bike against the far wall and give it the once over, all good. Finish last gulp of drink, file scissors and electrical tape away, put the curlings of backing-tape and loose inches of off-cuts in the bin, roll the longer left-overs of tape and put them with the collection. Bed.

Tomorrow, or to be more exact, later today this bike will be ridden up and down the road to make sure everything's Just So, the day after that it will be raced. New handlebar tape on the start line is worth two extra places on the finish line.