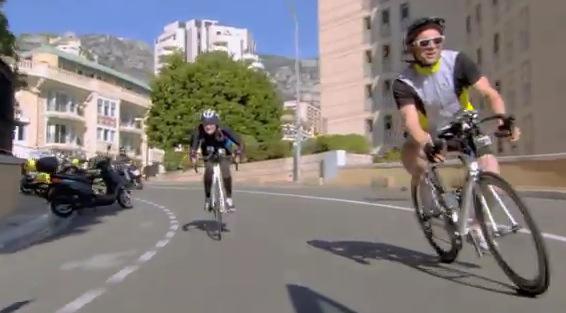 The Gadget Show is on and VecchioJo shouts at the television, like an old man

No-one could ever accuse the Gadget Show on Channel 5 of serious in-depth reviews in their reportage of electro wizardry and boys toys. The programme is a guilty pleasurable way to blob out and enjoy the techno-japery, especially when in that post-ride mid-muffin brain mush, but sometimes the gogglebox gets it so spectacularly wrong that it has you spitting tea at the screen and sending the better half to the bureau to fetch the Parker and Basildon Bond to pen a strongly worded letter.

In quite a profligate little jolly to the Mediterranean the Gadget Show team take it upon themselves to test exotic road bikes, in their words the pedal powered equivalent of F1 cars, around the Monaco GP circuit. Showcasing the Onix Azzuro that road.cc have already had a go on and the Factor 001, some would say that it would be unfair to pitch a cookie-cutter carbon-fibre Chinese frame (only 'cookie cutter on the outside I think Onix would say - ed) against a Formula 1 derived prototype bike that costs ten times as much, but as the bikes were ridden for the mere two miles round the Monaco GP circuit, in trainers, then it was never going to be the most comprehensive test.

Of course the Gadget Show is designed to appeal to a wide audience so there’s not the brain-power or attention span to plough deep into the technology, but the presenters do their best and make sure they throw in enough buzz-words to keep the tech quotient high, “computer designed”, “state of the art”, “high-grade”, “light-weight”, “just too advanced”, “amazingly stiff and comfortable” “just like an F1 car” and, erm, “this is when you need all this carbon”, all of which is mostly meaningless and there just to fluff the sofa-riding viewer (yeah cos us bike journos never use techno-babble… oh, hang on - ed).

But that doesn’t mean the show can make really really basic errors clearly visible to even the only slightly trained eye. Riding a £22,000 bike in sneakers, with the saddle too high is enough to make the most fair-weather cyclist wince, and the male presenter's unique descending and cornering technique has eyebrows raised amongst those that have ridden just a little bit further than down the shops (each to his own Jo, each to his own - ed). Then there’s the comedy stance of Jasons helmet, and the somewhat rakish angle of the handlebars on that Onyx that seems to get worse throughout the piece, both of which face a chorus of teeth sucking.

But the absolute hands-down winner in this 5 minutes of life that you’ll never get back has to be getting the front wheel in the Factor 001 the wrong way round. Not such a problem with a normal road bike wheel but when that wheel has a disc brake then it can cause some problems. It doesn’t matter if the braking system has titanium pipes and carbon fibre discs, even if they do look like steel, if the brake calipers are clamping against thin air it isn’t going to help. No wonder Polly had to “play safe” with the “cutting edge braking system” on the descent.

When you can spot a whole herd of errors in a feature that you know something about it does make you wonder about the veracity of the rest of the programme, even if it is just visual and cerebral bubble-gum there’s no need for fake science, mis-information and just plain cringeworthy wrong.