Suberb riding, but feed stations glitches show the devil is in the detail
by Finn dos Santos

Who’d be a sportive organiser these days – especially one attempting to run an operation outside the realms of the well-established, well-funded, well-manned major events? There certainly seems to be no shortage of takers, but based on our experience this year they are chasing a thinly spread sportive-riding market while struggling to meet increased rider expectations.

Witness Sunday’s Devil Ride which featured a choice of three superb courses and benefitted from excellent, if rather breezy, weather but which saw a field of just 270 riders departing event headquarters in Brecon, mid-Wales. That number was about 50% down on last year’s participation.

And after riding the shortest of the three routes on offer, we’d rate most aspects of the third edition of this friendly, low-key sportive as good to excellent with one notable, glaring exception. Having enjoyed the scenic, surprisingly traffic-free early part of the route we arrived at the first feed station hungry and thirsty after more than 30 miles of hot, hilly, headwind-embattled riding. Once there it was initially bemusing to see a dozen or so riders milling about rather aimlessly. Entering the village hall where the sustenance was located the reason for their lack of urgency became apparent. There was not a drop of water to be had in the place and the riders were waiting for it to arrive.

Added to that, the unmanned hall looked like the aftermath of feeding time at the zoo. “We’ve paid for this!?” exclaimed one furious rider, surveying the slim pickings on offer. No gels, bananas or energy bars were in evidence, just plates of Haribo sweets, popcorn, Ritz crackers, peanuts and other sundry but largely unappetizing fare which by this stage had been seriously depleted by a couple of hundred earlier starters. It was difficult to tell if it the angry punter was making a statement or asking a question, but the level of incredulity in his voice told its own story. 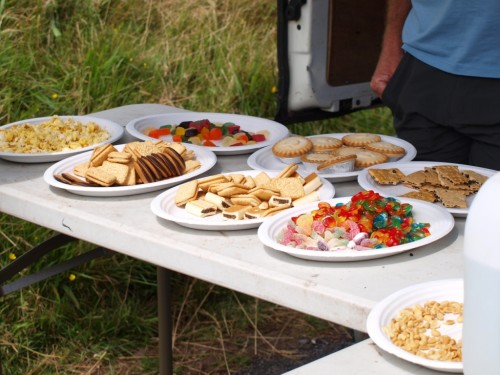 With no running water at all at the site, it was also hard to escape the notion that after previous riders had used the toilet facilities without the option of washing their hands, the uncovered plates may not have been the most sanitary arrangement possible.

After waiting for five minutes in vain for the arrival of water, we left, simply hoping to get by on our own remaining food and drink supplies, but struggling to comprehend how something so basic could be so badly botched.

Still, as the shorter 62 mile Little Devil took its leave of the 80 mile Demon and 100 mile Big Devil options, spirits were lifted by the beauty of the river valley through which the route meandered.

With a relatively small field, riders were well spread out and for many, there were long solo stretches with little in the way of group riding opportunities on offer. But hitting the climb up the drovers’ road the through artillery range at the 474m Drum Ddu, other riders were finally visible on the long, straight uphill stretch that seemed to rise to infinity and beyond. In fact, it eventually turned a corner, steepened slightly and went on climbing some more before a descent that provided a delicious cooling breeze to riders’ sweat-soaked bodies. 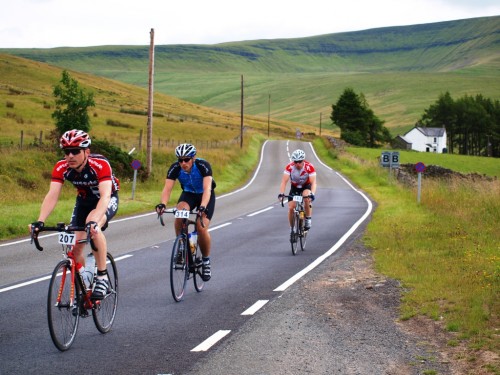 But in common with other unfenced upland areas of Britain, there’s always the danger of the dreaded sheep-on-road-during-fast-descent scenario in mountainous mid-Wales. And as luck would have, shortly after the aforementioned climb we found ourselves bearing down at over 40mph on just such a potentially disastrous ovine-cyclist interface. There was little time to consider how best to warn the dopy quadrupeds of our imminent, high-speed arrival in their midst, a conundrum that must have confronted many a panicked rider in similar situations. “Get out the way you woolly bastards!” was the first thing that popped into this rider’s head and therefore, at maximum volume, out of his mouth. It proved a crude but mercifully effective solution to averting a grisly and expensive tangle of mutton, carbon, human and Shimano Ultegra. In future, maybe it’ll be easier simply to use the brakes.

The rest of the ride back to Brecon was an exhilarating, wind-assisted blast for home, apart from one of those sting-in-the-tail climbs that organisers seem so fond of but which tired riders rarely appreciate.

Hot food in the form of bean casserole, pitta bread and tea or coffee followed by a fine selection of cake awaited finishers but this somehow only seemed to highlight the paucity of what had been offered earlier, when adequate fuelling was far more important.

At least it made for a convivial atmosphere in the finishing area where road.cc spoke to a number of riders relaxing after the event.

Tackling the Big Devil - his first century sportive - Kevin Whitehill of Bourton-on-the-Water declared himself pleased with his day. “The riding was superb and the Devil’s Staircase was as hard as I expected it to be, it’s a bit of a killer!” he said. “Some of the roads had an Alpine feel and it was a good challenging day’s riding. I’d come back eventually, but maybe not next year.” Brothers Ian and Chris Browning from Leamington Spa and Corsham also enjoyed their day out on the long course. “It’s a great route, really tough and relentless but we were expecting to see more people, we didn’t see anyone else for hours,” said Ian. “The Devil’s Staircase wasn’t as bad as we thought it would be, there are some steeper hills near Bath. We weren’t expecting the last tough climb, though even that was enjoyable in a sadistic sort of way. The signage was very clear and the only disappointment was the feed stations, but fortunately we had brought enough food for ourselves.” 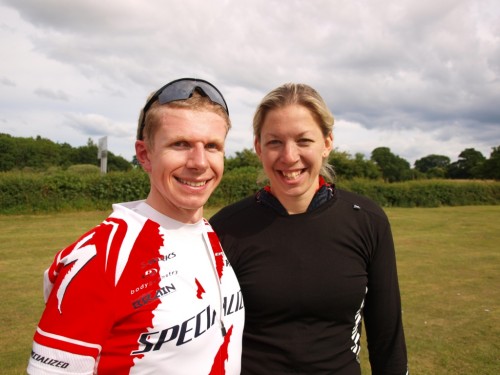 Recently married couple Jo and Colin Hill from Worcestershire had come back for the second year running and took on the Demon and Big Devil respectively. “The course is challenging, the scenery is spectacular and it’s well organised,” said Jo who was glad to have finished after suffering a broken chain and walking two miles before being helped by another rider. “I felt like chucking the bike over a hedge after it happened and I’d resigned myself to the sag wagon but someone stopped and fixed the chain for me. He was fantastic and I’m just so pleased to have finished!”

“The food at the end was good, the marshalling and signage were good but I’d forgotten how hard and steep the climbs were,” said Colin. “It’s the only sportive we’ve chosen to do this year and it’s definitely a tough one. We probably won’t be back next year but then again, we said that last year!”

Three Shrewsbury-based riders, Stuart Proctor, Rob Ellmore and Mark Stone had also enjoyed their rides but were unimpressed by the feed stations.

“The food was rubbish,” said Mark who counted himself lucky to have secured the last half banana at one of the stops. “Otherwise it was flawlessly organised and the ankle timing chips were great.”

“I was shocked walking into the first feed station and finding no energy drinks,” said Stuart. “Given the terrain we needed something more than just water.”

Rob also felt the event was let down by poor refuelling options. “I was surprised because at the Autumn Epic [run by the same organisers] the food was much better. But I’d still do this one again whereas I’d think twice about returning to some of the others I’ve done recently.”

To his credit, organiser Matt Walkley of Cyclosportives.co.uk accepted the feed station criticism without attempting to shift the blame to his sub-contractors.

“It shouldn’t have happened and all we can do is to say sorry,” he said. “If the food was not good enough then we need to address that, that’s clear. It a shame the food let us down, we organise events so that people enjoy themselves and if something was not done properly we are disappointed, but with the exception of the food stops the event went well,” Matt concluded.

He was right to finish on a positive note. A problem with feed stations is easily addressed and it would be unjust to allow a fixable issue to overshadow what was otherwise a well run, thoroughly enjoyable day out. Assuming this year’s glitches are addressed, and Matt has assured us they will be, we’d recommend you stick this one in your diary for 2011.