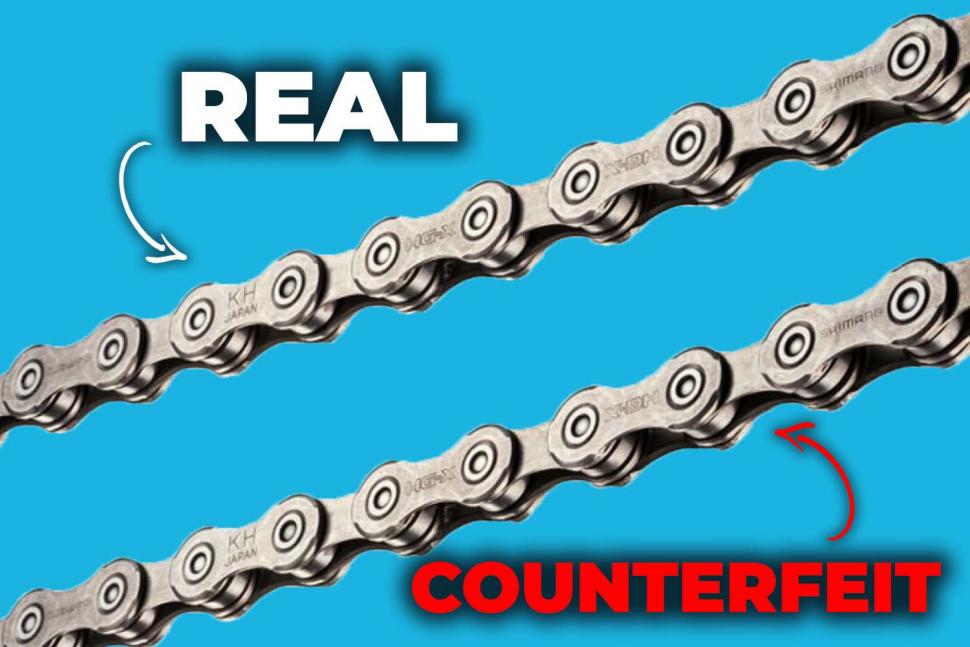 How can you spot counterfeit bike components and avoid getting ripped off? We spoke to Shimano to find out

Limited availability and supply chain issues have made counterfeit products rife and ever more tempting. We take a look at the risks and what you can do to avoid getting scammed
by Jamie Williams

Everyone loves a bargain, but not when it could mean sliding down the tarmac on your face. After a member of the road.cc team unknowingly purchased a counterfeit chain recently, we thought we'd take a look at the risks involved, how you can avoid getting scammed and what the big brands are doing to prevent it. 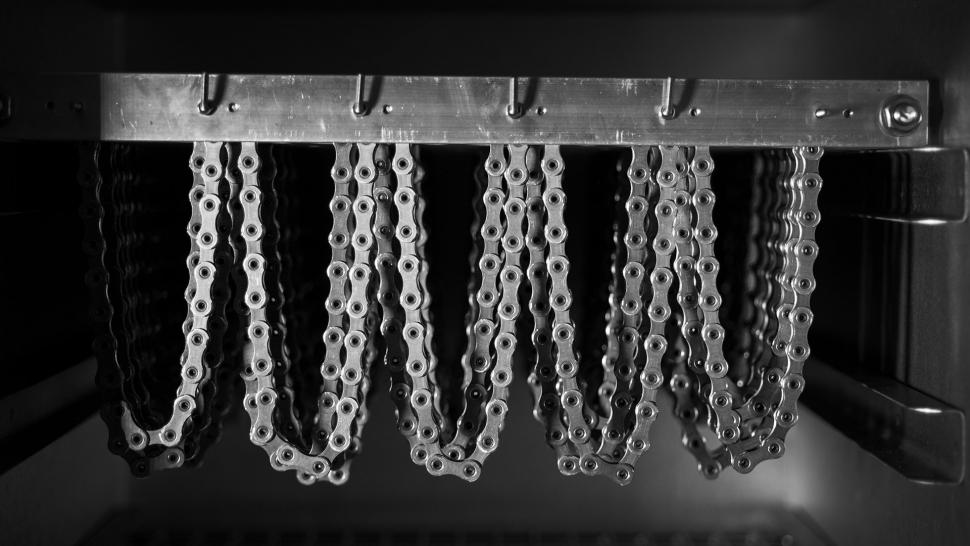 When Covid-19 reared its ugly head it brought with it supply chain issues and limited availability. Many people, us included, were left searching far and wide for certain products and components, but when they arrived they weren't always what they said they were.

> Shimano issues warning saying that 'shimano-clearance.store' is a fake site

In this article we'll focus specifically on counterfeit products rather than 'fake' ones (unbranded copies), and if you want to buy the latter then that's your own prerogative; however, something pretending to be something that it isn't is a different kettle of fish entirely. 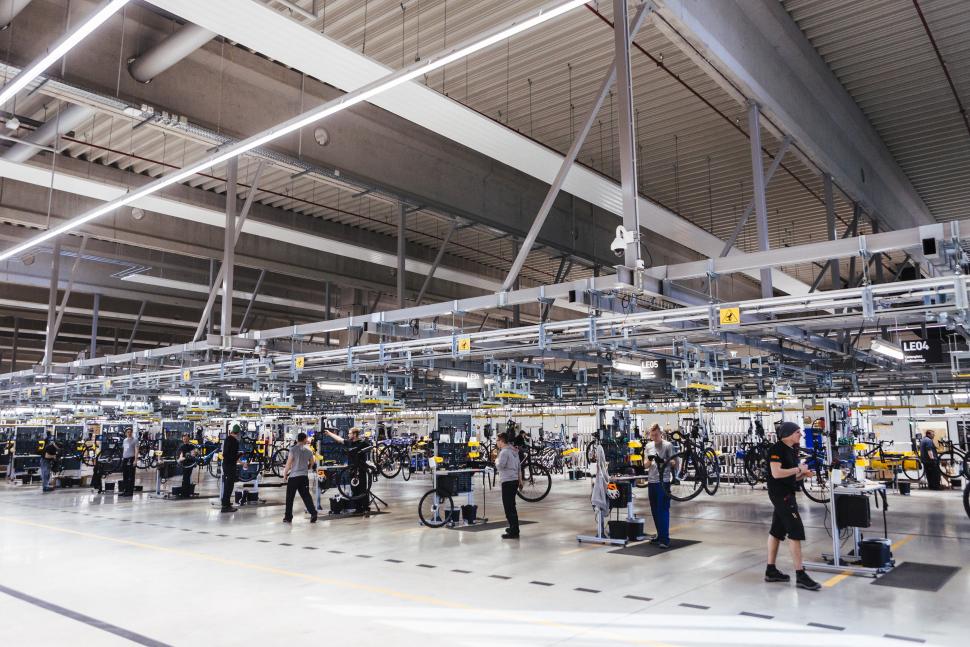 Firstly, let's understand what a counterfeit product actually is. They usually bear the trademark of a legitimate and trusted brand, such as Shimano, FSA or Sram when we're talking bikes, but are produced by another party and are not made to the specifications of the original manufacturer. They're also often produced illegally and sold at a profit to fund other criminal activities.

Other than the obvious ethical issues, this raises some serious safety concerns. Especially when it's components in question...

Let's play a game of spot the difference. Do you think you could tell which one is the real deal? 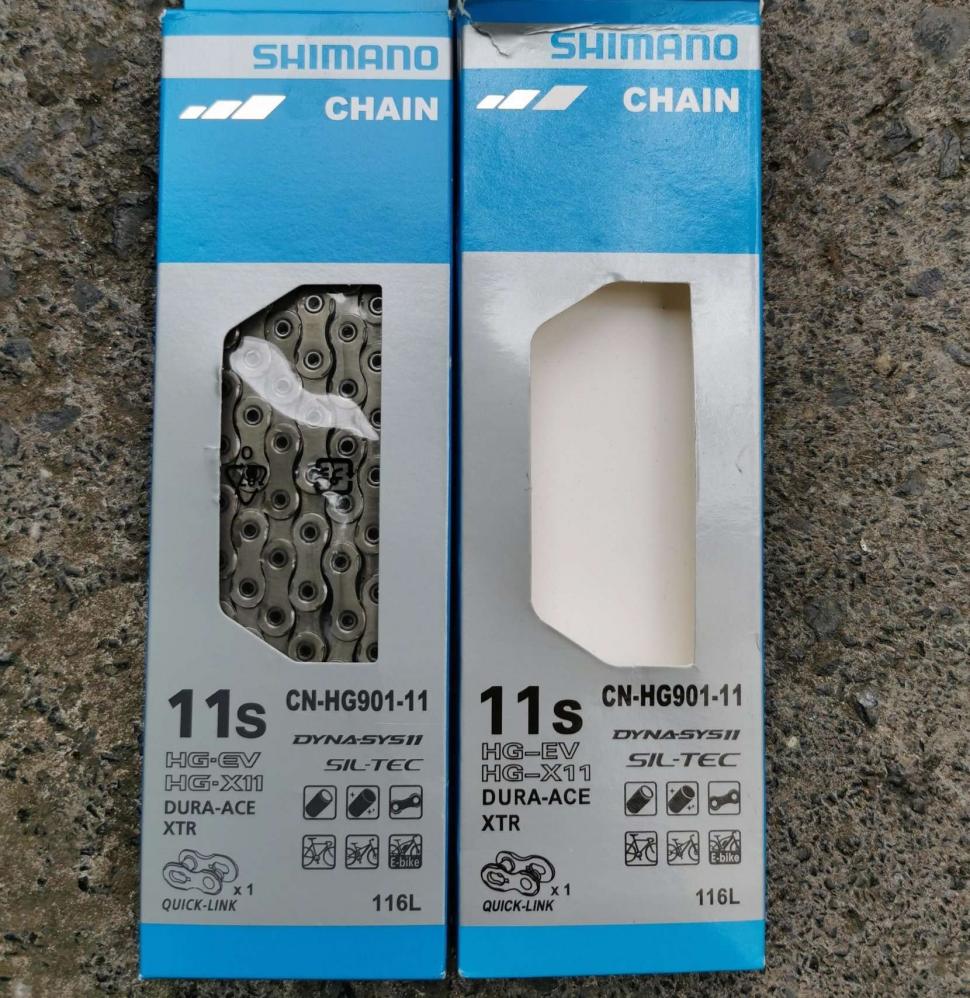 So the packaging is obviously designed to be very similar, and it is in fact the open packaging that is the counterfeit (on the right). There aren't many tell-tale signs, but the shiny vinyl embossing top left is obviously hard to imitate, and is missing off the largest area.

> Shimano road bike groupsets 2022 — Everything you need to know

What about when they're out of their packaging? The text is all but identical but there are some very minor differences in the pins and chamfers to aid shifting. We're confident that we wouldn't bat an eye unless the two were side by side. Spoiler: it's the top chain that is genuine. 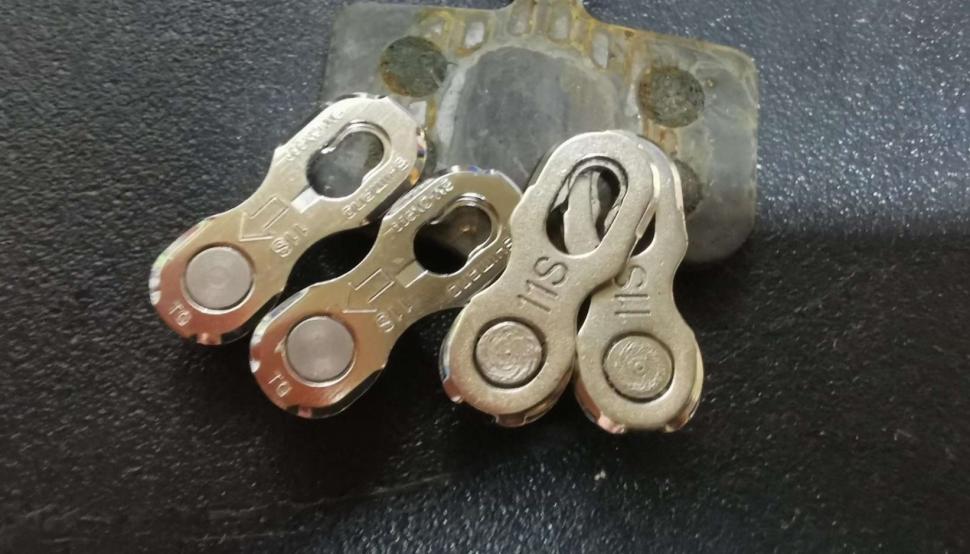 What actually gave the game away was the quick link. This is not only stamped with different text (fake on the right) but it didn't fit together; now if the tolerances are that far off for this link, then we don't have huge confidence in the rest of the chain.

The store where the chain was purchased from, Amazon, hastily removed the product, but we can't help but wonder how many had been sold before that happened. We've also noticed an increase of reports on the road.cc forum of counterfeit goods for sale on sites such as Facebook Marketplace, and even some dodgy shops mixing counterfeit and genuine products.

You don't need us to tell you the dangers of a chain breaking during use, the results could be catastrophic as we all know. To minimise the chances of this happening, brands such as Shimano invest huge amounts of money in product testing, quality control and manufacturing to ensure that components such as chains exiting their facilities are up to scratch.

Shimano is aware that counterfeit products are trickling into the market and that it can be tempting to purchase parts from less-than-reputable sources. We asked what measures it is taking to prevent this:

"Shimano recommends that consumers purchase genuine Shimano parts from Authorized Shimano Dealers and Distributors. If a consumer believes to have purchased a counterfeit product, we recommend they contact their local Shimano Service Centre, or Shimano retailer for further assistance."

Shimano also pointed us in the direction of its online anti-counterfeit page which has recently been updated with some new initiatives. Since May 2021 there's been the rollout of new packaging that is supposedly harder to copy, QR codes on products and the introduction of a new phone application. 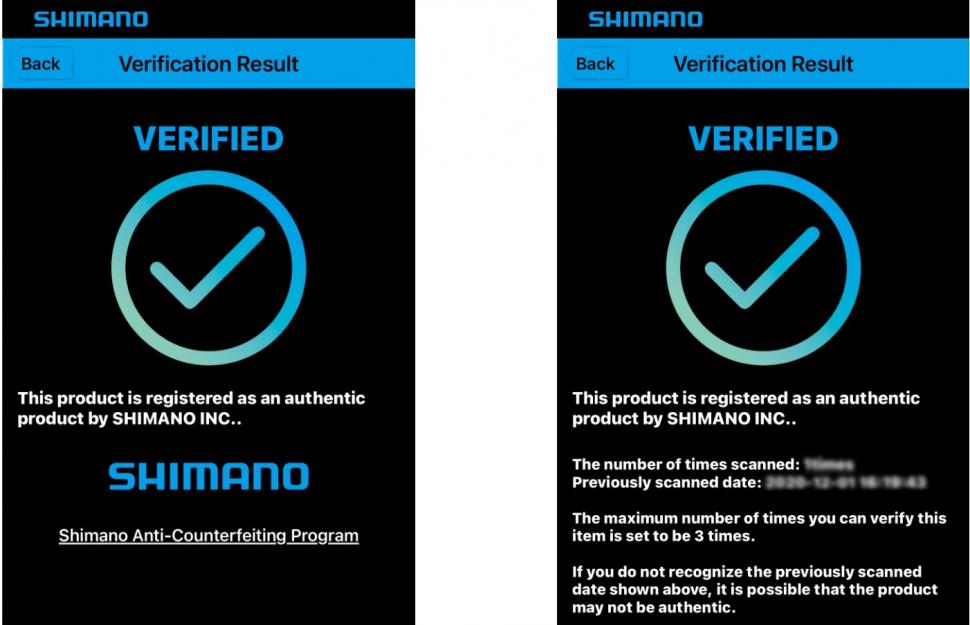 > 29 of the best cycling apps for iPhone and Android

We're particularly impressed by the Android and iOS app, which is currently available in the US with other markets being reviewed. This allows users to scan a product and see whether it is a genuine, authorised product. In our opinion the sooner we can get our hands on this the better, because it makes it easier to catch traders of counterfeit goods and gives consumers peace of mind.

How to avoid being caught out

We've asked other big brands for their take on the problem, and we'll have an updated article as and when we hear back.

We're trying to get a better idea of the scale of this problem. If you've fallen foul of counterfeit products then let us know in the comments section below or email us at tech [at] road.cc