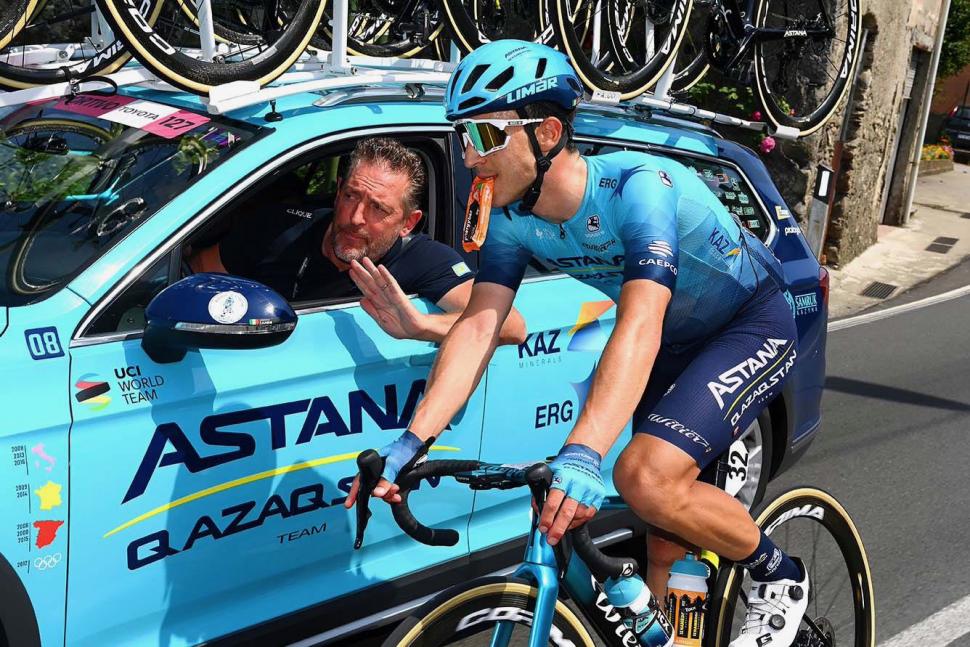 How do Tour de France riders eat on the move?

It takes a lot of calories to get through a stage of the Tour, and here's how the racers take them all on board
by Liam Cahill

Riding the Tour de France requires a lot of calories: 5,000, 6,000 or even more on every stage. It takes a whole lot of snacks to stay on top of that kind of energy expenditure. A mid-ride Snickers bar and a can of Coke really won't cut it, so how do the pro riders get sufficient nutrition on board?

What do pro riders eat on a stage of the Tour de France?

A pro rider will eat mostly carbohydrates during a stage of the Tour de France. And we're talking about a whole lot of carbs.

On a typical race day, a pro rider will have a substantial breakfast: something like porridge followed by eggs and avocado on toast, and maybe some fruit.

Then it’s off to the start line with pockets packed full of low-bulk snacks. 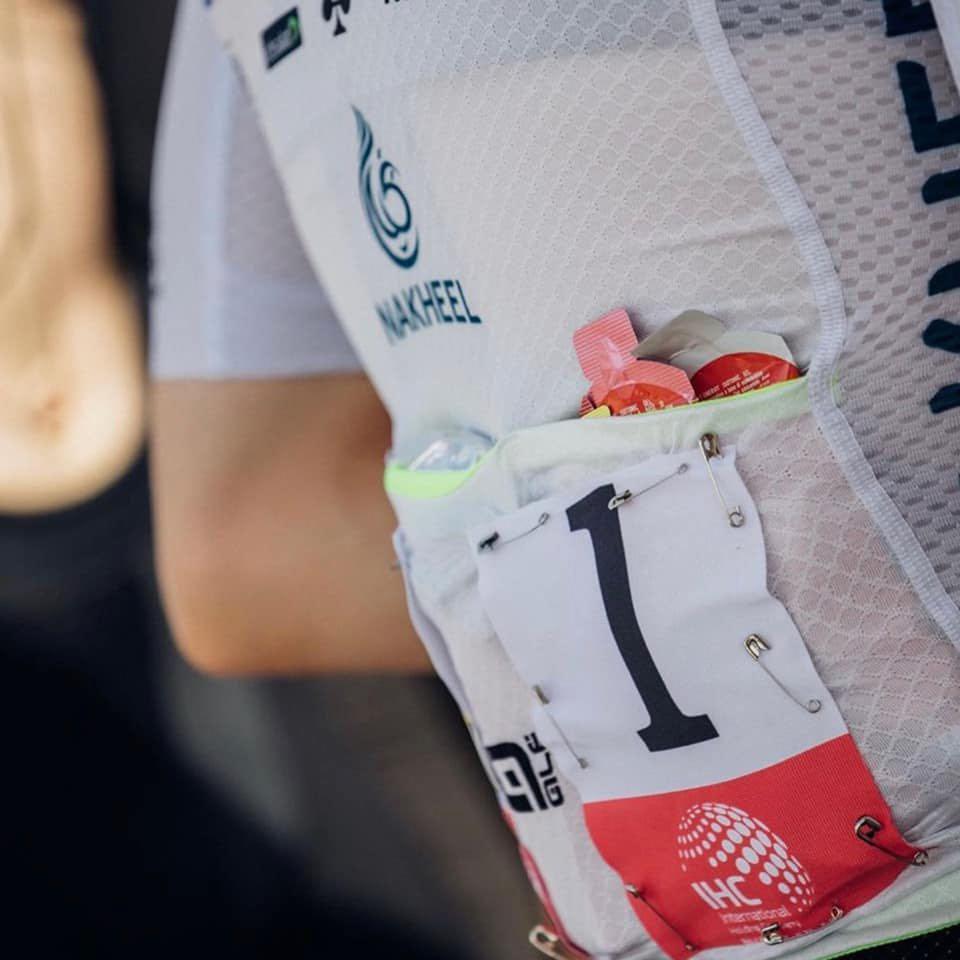 Let's say, for example, that today's stage is going to be fairly straightforward, with a breakaway expected to get away from the main field early on. It’s a flat stage with a category 2 climb to finish and our pro rider needs to keep the team leader in a good position for the start of the ascent.

Snacking starts early with a tasty rice cake once the breakaway riders have raced off up the road. This is a small cube of pudding rice with some flavouring – like a chopped-up date or apricot. They take a little bit of chewing, so it’s best to get these down when the going is easy. 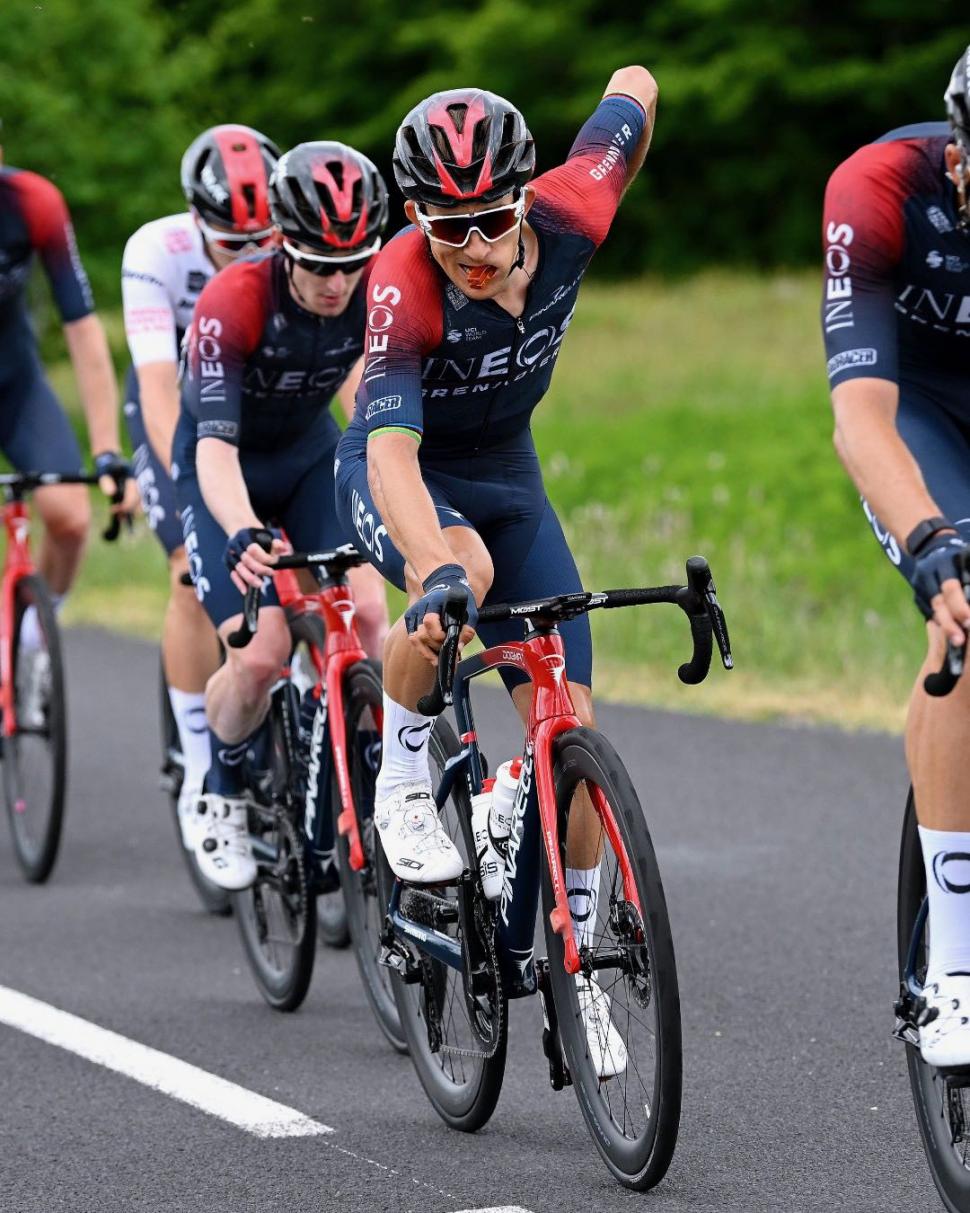 As the race meanders its way through the day, our pro friend fishes an energy bar out of his back pocket. These are great for keeping energy levels topped up because they're jam-packed with carbs. One energy bar for every hour's riding should be enough. 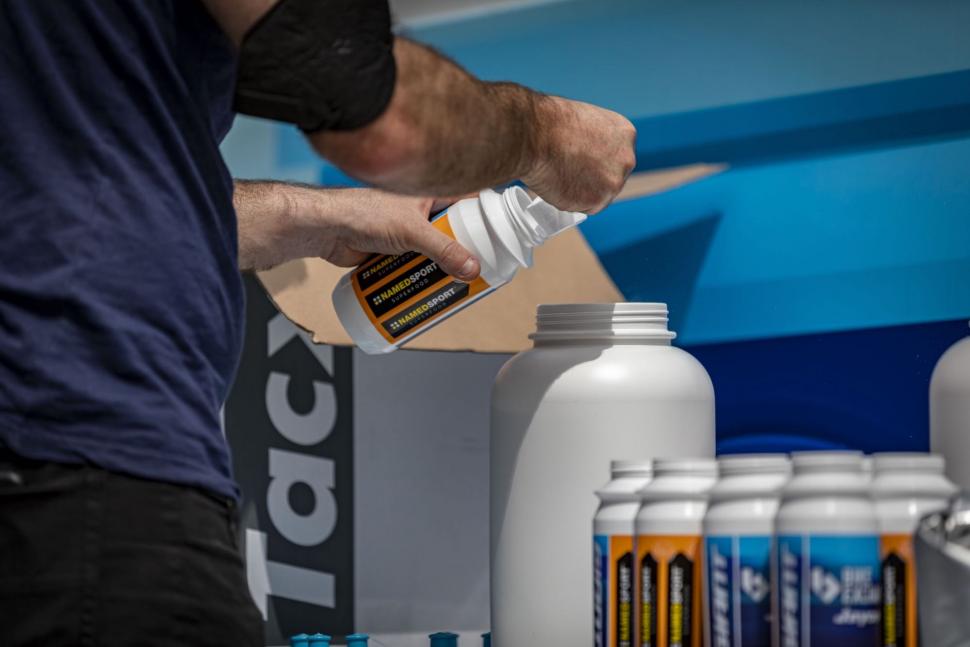 Washing all of this down is some flavoured energy drink. As well as being crammed with carbs, the drink might contain key electrolytes (salts) to replace those that our rider will be losing as he sweats in hot temperatures.

Our pro will have two bottles on his bike and perhaps collect another from the team car as he returns to the peloton after answering a call of nature. He'll get through a 500ml bottle every hour.

Running out of snacks is annoying for most of us, but when you’ve got a long way to ride – perhaps at a very high intensity – it can be a major problem... and a very costly one when you consider the amount invested in top-level cycling. This is why a team works hard to make sure that its leader and support riders are topped up with fuel and are never left hanging.

There are a few ways that teams get food and drink to their riders. The easiest way is for a team leader to have another rider drop back to the team car and collect some. After the leader places their order, the teammate falls to the back of the peloton, sticks their hand in the air to signal to the race director’s car that they require service, and the relevant team car is called up to assist.

In the meantime, the teammate can radio the team car to let those inside know what's needed so that everything can be ready.

Once loaded up with bottles and energy gels or bars, the rider will make their way back through the peloton in order to distribute the food and drink. 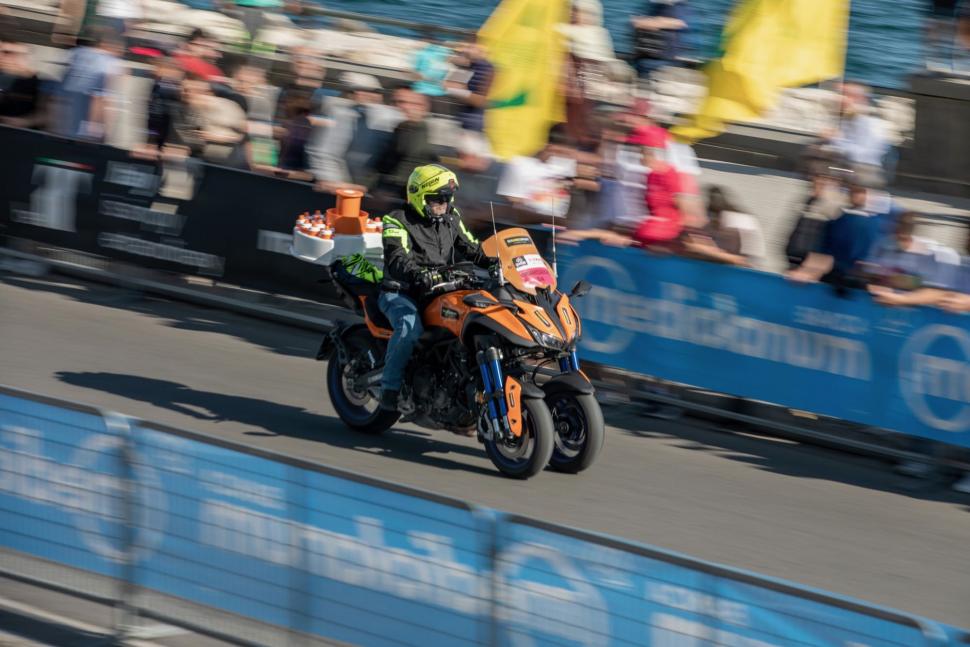 A rider can carry a lot of bottles – usually at least eight inside their jersey. If there isn’t much room to move through the bunch then they will shout “service” so that other riders can give them some room.

Providing food and drink for teammates is a tiring job that takes longer than you’d think. There were 176 starters in this year's Tour de France. Negotiating your way through that lot isn't easy. Although you might not notice it on TV, a rider could be moving back and forth almost non-stop on a hot day 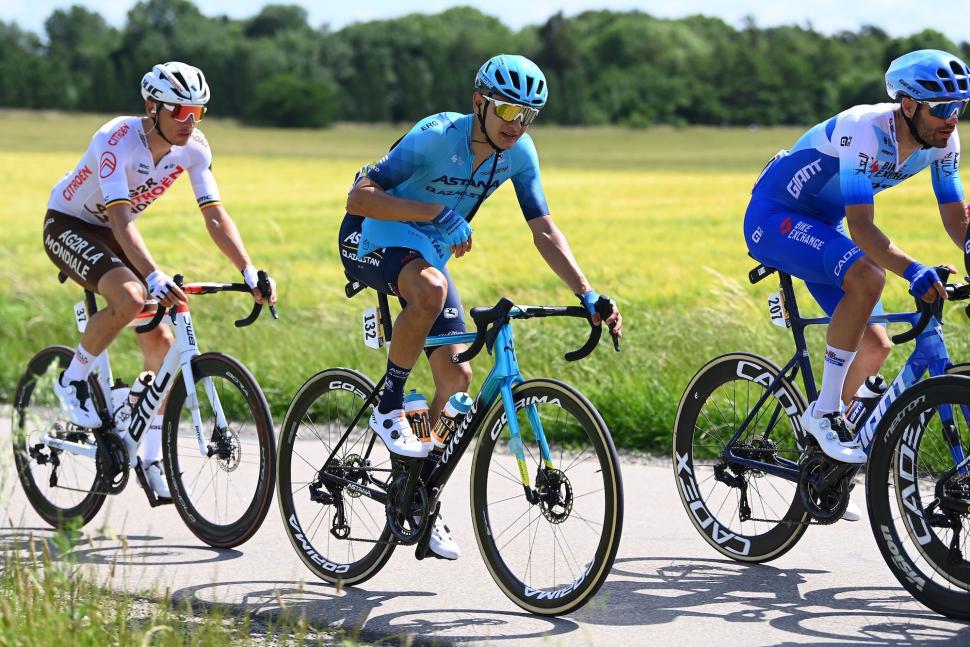 A musette is a lightweight shoulder bag that’s filled with food and drink, and it’s a great way to hand riders their nutrition without the need for anyone to go back to the team car. There might be water bottles, energy bars, gels, fruit, cake, and so on tucked away in the musette. 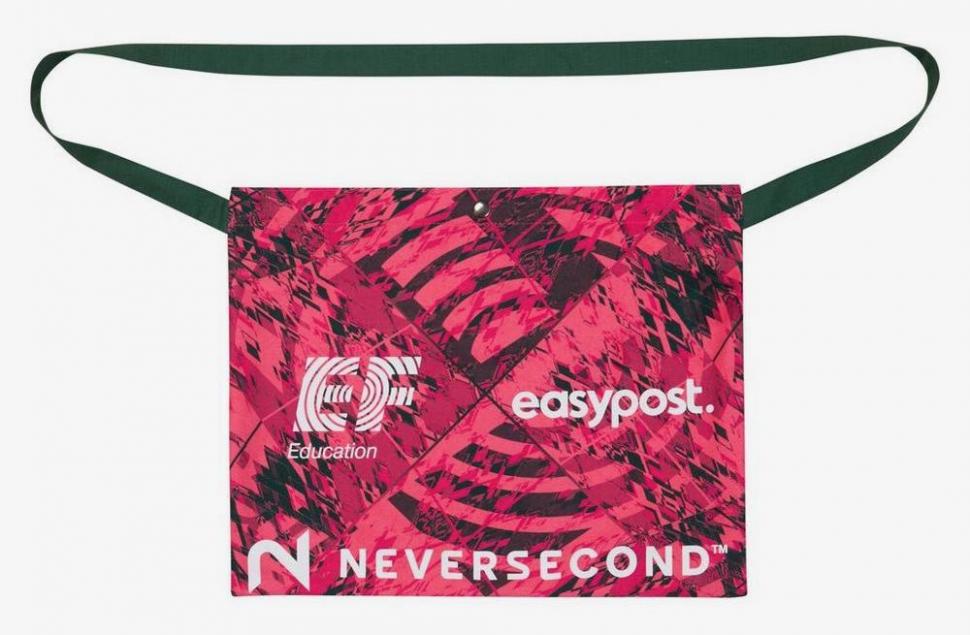 Soigneurs (staff who do loads of different jobs within a team) stand on the side of the road in designated feed zones with musettes held aloft. A rider grabs a musette on the fly and slings it over their shoulder, unpacking everything into their pockets and onto the bike as they ride along.

Although soigneurs wear team colours – maybe a jersey and a hat – and the musettes carry the relevant team’s logo, it can still be a chaotic process when you have a large peloton. It's a bit like dozens and dozens of people trying to pick up their orders at a drive-thru McDonald’s at exactly the same time.

Each stage has designated feeding zones. There’s a zone for waste just before and just after the feeding zone so that riders can ditch their rubbish, and another just before the final 20km (12.5 miles) of the stage begins.

Deceuninck–Quick-Step’s Julian Alaphilippe was given a 20-second time penalty for taking a water bottle when it wasn’t permitted in the 2020 Tour de France, costing him the race lead. Adam Yates, who was four seconds behind Alaphilippe at the start of the day, took the yellow jersey as a direct result. 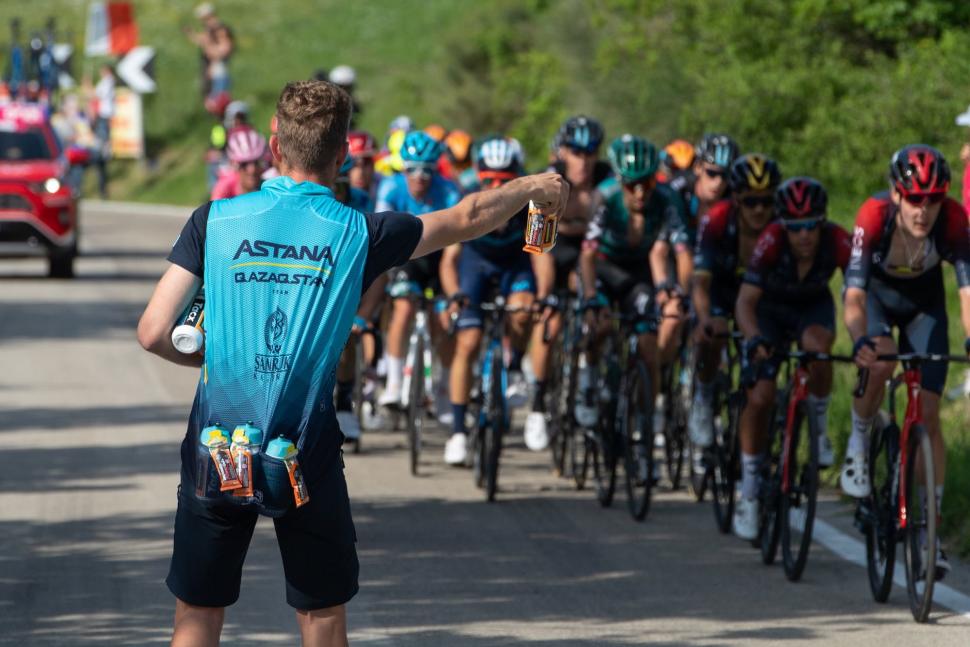 during the 30 first and last 20 kilometres;

- on descents of mountains listed on the mountain classification;

- in any other area specified by the organiser or the commissaires panel.

Alaphilippe was given a bottle with about 17km (11 miles) to the finish, hence the penalty. Rules are rules.

Back in the 2013 Tour de France, Chris Froome sent teammate Richie Porte back to the team car to fetch a gel even though they were well within the final 20km of stage 18, because he was in danger of cracking before the line. Froome was aware that he was likely to be sanctioned as a result, but figured it was better than running out of energy which could have affected his time on the stage and even his performance on subsequent days.

Both Froome and Porte were given 20-second penalties, but Froome won the race overall by more than four minutes so it was probably best to play it safe and take both the gel and the sanction.