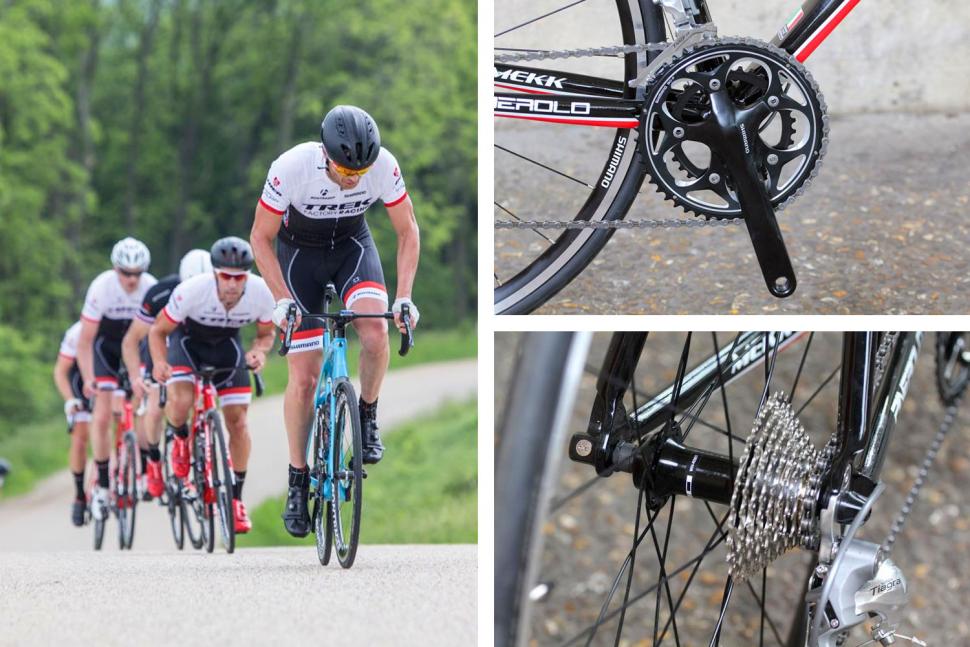 Suffering on the hills? Find out how to get lower gears to make climbing easier

If you find yourself wishing you had a smaller, easier-to-turn gear to take the pain out of riding uphill, there are several ways you can alter your bike to make things simpler.

Follow our advice and you'll soon be spinning up the climbs, and you might even learn to love them! 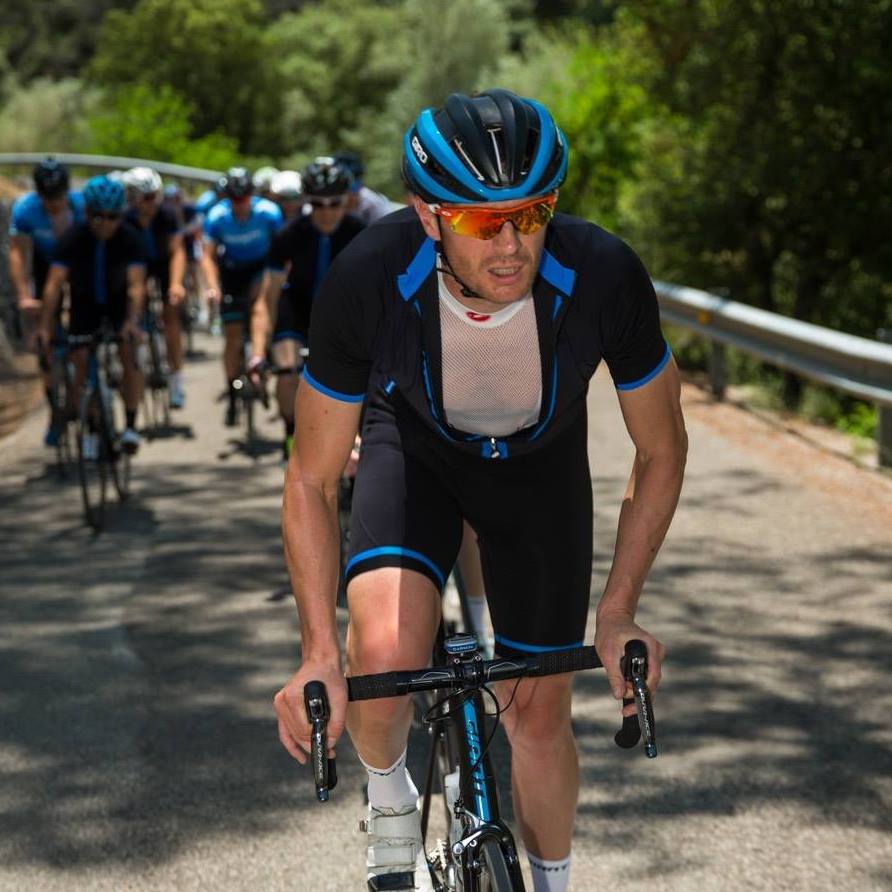 For this article we’re assuming that you have a bike with derailleur gears rather than hub gears.

If you have a typical derailleur setup on a bike designed for the road, the chances are that you have two (possibly one or three) chainrings on the chainset (at the front), and somewhere between eight and eleven sprockets on the rear wheel, in what's usually called a cassette or cluster. But what if you’re running the chain on the smaller chainring and the largest sprocket and the gear is still too hard? You can work on your fitness, of course, but you can also make changes to your equipment.

Cassettes come with various different combinations of sprockets. We’ll take Shimano’s 105 R7000 groupset as an example. Shimano offers a 105 cassette with an 11-tooth sprocket up to a 28-tooth sprocket – often written as 11-28T. It also offers a 12-25T cassette, a wide-range 11-32T cassette and an even wider 11-34T. 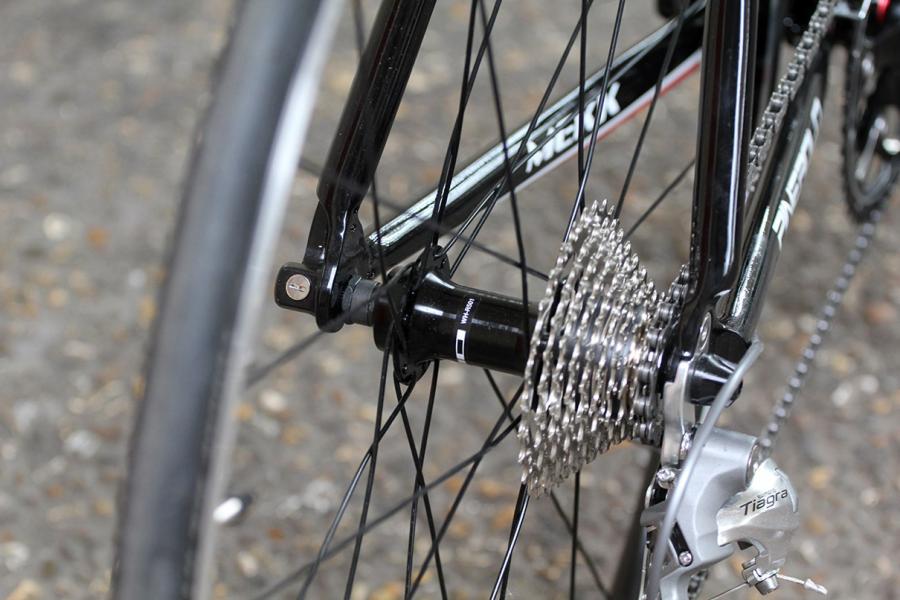 All other things being equal, the 34T sprocket on the 11-34T cassette is going to give you the easiest gear. If your bike is currently fitted with an 11-28T cassette, switching to an 11-34T cassette will make climbing less of a struggle.

Swapping one cassette for another is a straightforward job but you do need special tools: a cassette tool and a chain whip. If you don’t have these, you can ask a bike shop to do the job for you.

>>Read more: How to fit and remove a sprocket cassette 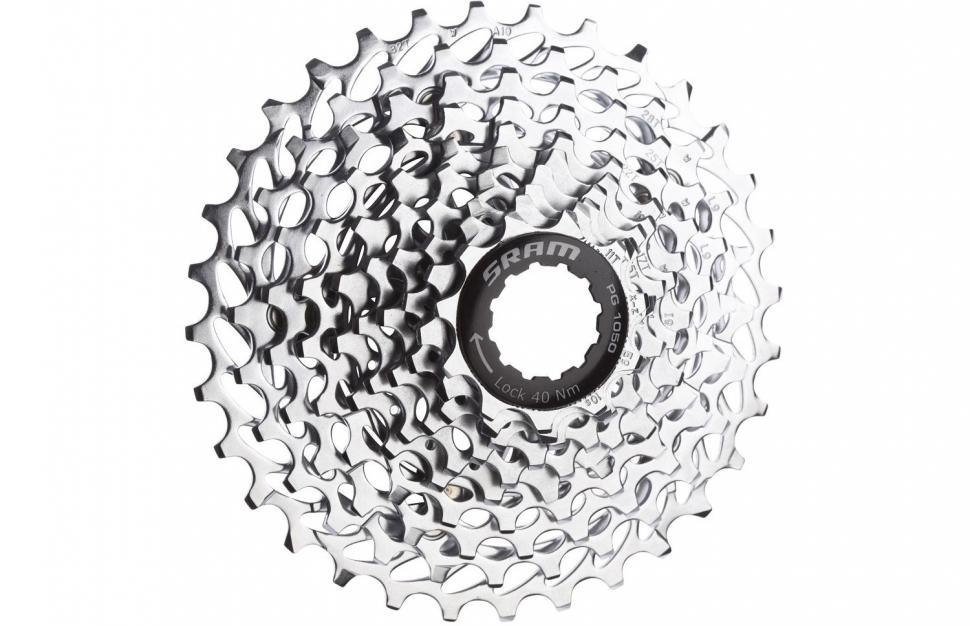 SRAM kicked off the use of double chainsets and super-wide-range cassettes a few years ago with its WiFLi designs, which were the first systems to combine a 50/34 crankset with an 11-32 cassette. SRAM also offers an 11-36 cassette, intended for use with single chainrings. Shimano only goes to 11-34 with its 105 components, but there are reports of people getting SRAM 11-36 cassettes to work in Shimano systems.

The very latest versions of Shimano's Ultegra and 105 GS rear derailleurs will actually handle an 11-40 cassette, which opens up a range of possibilities for gravel bikes, touring bikes and any other situation where you're not in a hurry.

If you have a Campagnolo system, then for most groupsets of a few years ago you're limited to a 29-tooth sprocket. However, the Potenza groupset launched in March 2016 offered an 11-32 cassette so Italophiles can also get low gears; the following year's Centaur groupset followed suit. The 2018 launch of 12-speed Record and Super Record components saw the introduction of 11-32 12-speed cassettes, though you'll need a lot of new components to make them work: shifters, derailleurs, chain and sprockets.

Campagnolo then launched a 12-speed version of the Chorus groupset with an option of 11-34 cassette and 48/32 chainset, offering the lowest gear range the Italian company has ever made.

Meanwhile SRAM has turned it up to 12 as well, with new Red AXS and Force AXS groupsets that include innovative low-gear set-ups with 10-33 cassettes and 46/33 chainsets. The upgrade path is painful though, as you'll need a complete new transmission and wheels with SRAM's XDr driver for the 10-tooth sprocket.

But if you want high-tech shifting and low ratios it might well be worth it. The latest incarnation of AXS is Force eTap AXS Wide, with a 43/30t chainset and a 10-36t cassette.

We're going to focus on Shimano systems in this article, as that's far and away the majority of bikes out there.

If you change your cassette, you need to bear in mind the maximum sprocket your rear derailleur will handle, and its total capacity. This is the total difference in chainring and sprocket sizes that it can handle.

Shimano’s short cage 105 R700 rear derailleur has a maximum sprocket of 30T and a total capacity of 35 teeth. That means you can use it with the setup described above. But you can’t use that rear derailleur with the same chainset and an 11-34T cassette for two reasons. For a start, it will struggle to get on to the 34T sprocket, though it might work if your gear hanger is long enough.

Even if the derailleur will shift to the big sprocket, the total difference you're asking it to handle would be 39 teeth, so either the chain would be too slack in the combination of smallest chainring and smallest sprocket or too tight in the largest. That can cause the transmission to jam or even break. 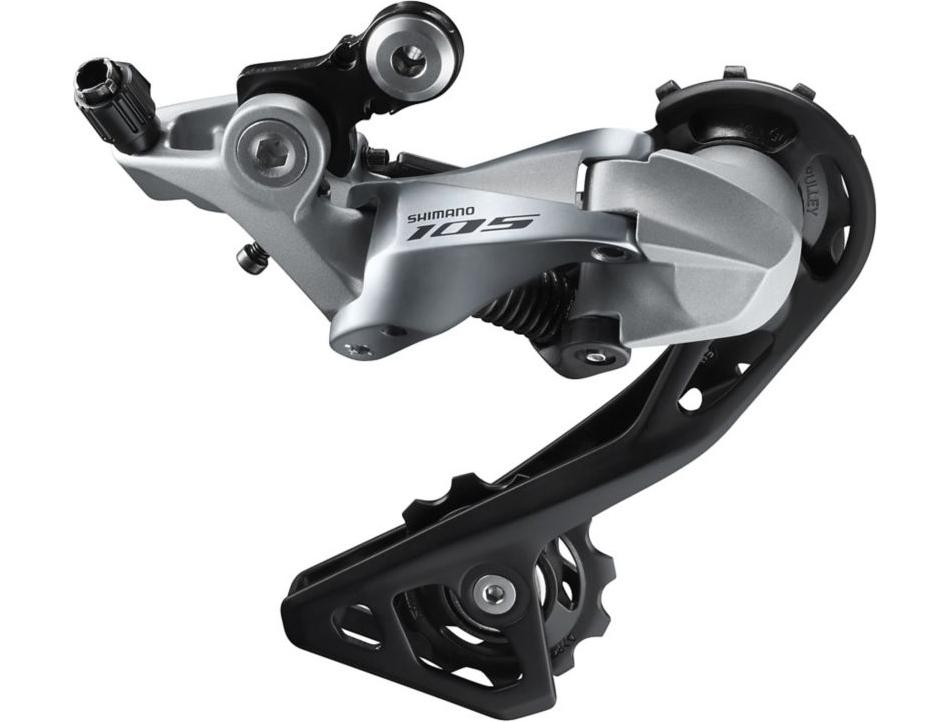 We've found that this derailleur even works with a Shimano 11-40T cassette (£69), but don't tell Shimano we said that.

If you’re on a road bike you’ll probably have a double chainset, that is, a chainset with two chainrings. There are three common double chainring combinations: a 52 or 53-tooth outer chainring with a 39-tooth inner chainring; a 50/34T pairing, known as a compact or a semi-compact 52/36T.

If you have a 53/39T setup, for example, and you find the gearing too hard, you can buy a 50/34T chainset or fit smaller chainrings to your existing cranks (check that the new chainrings have the same bolt circle diameter, BCD, as the old ones). 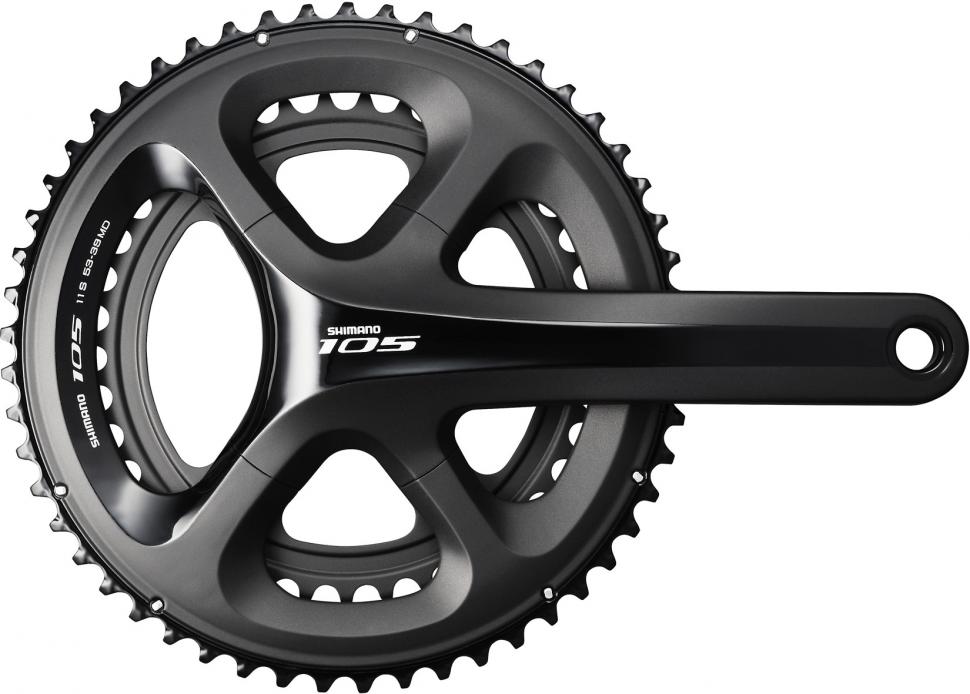 You’ll also have to alter the position of your front mech and get yourself a new chain (or at least shorten your existing chain).

The capacity of a Shimano 105 front derailleur, for example, is 16T so it’ll cover all of the common double chainset combinations.

If a compact chainset isn't small enough, you can go lower still with a sub-compact like the FSA Energy. These typically have 46T and 30T chainrings for a roughly 10 percent drop in gears.

Shimano got on the low-gear train with its GRX components including 46/30 chainsets.

Going for a triple chainset 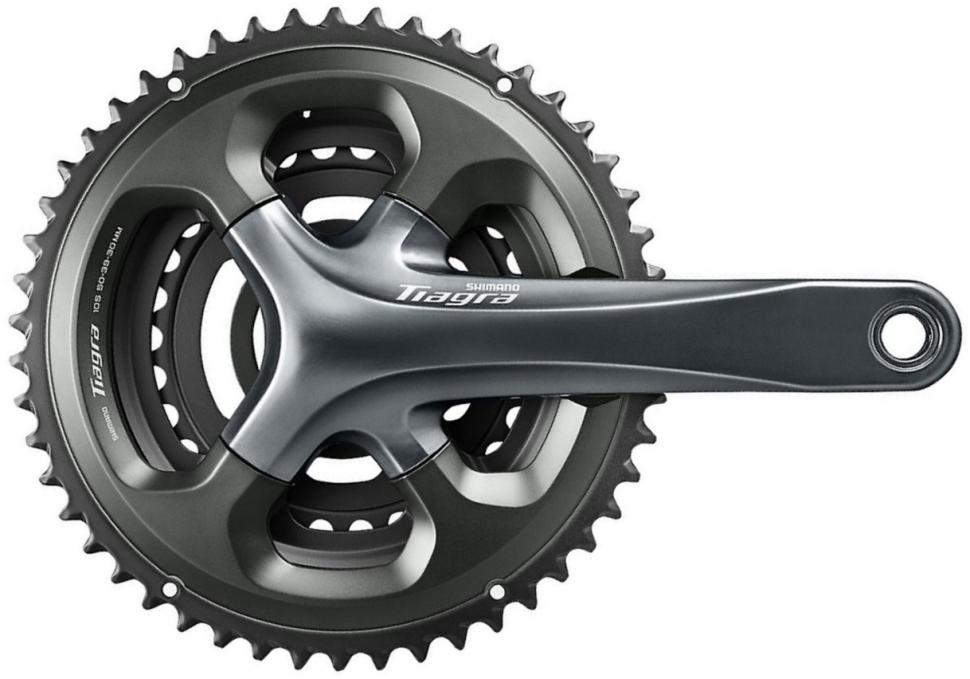 However, this is quite a complicated swap. You'd need to change your shifters, your chainset and probably your derailleurs too. You’re far better off buying a bike that’s already set up with a triple rather than swapping to it.

Over the past few years, the introduction of cassettes and rear mechs that provide a super-wide range of gears has meant that triple chainsets have largely fallen out of favour for road use. That said, some people get on well with triples; it comes down to personal taste.

Good luck out there on the climbs!