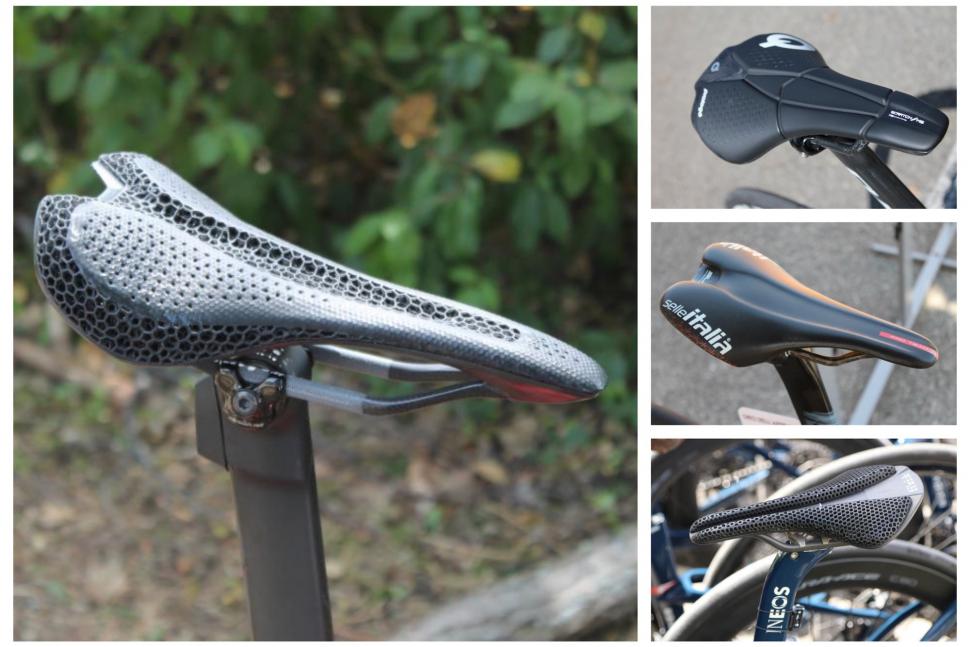 Perches of the peloton: which saddles do Tour de France riders use to stay comfortable?

What sort of saddle would you use if you were riding over 100 miles nearly every day for three weeks straight? Here are the saddles the pros choose, and they’re a varied bunch, to say the least.

We used to see quite a lot of pros on saddles from brands that weren’t sponsoring their team. They might find a favourite saddle and stick with it for years, blacking out the logos too so as not to make it too obvious.

We wouldn’t say this never happens anymore but it’s far less common than it once was. Most brands now have extensive ranges and clever fit systems that are designed to cater for everyone. Plus, social media means that non-sponsored components are far less likely to slip under the radar. 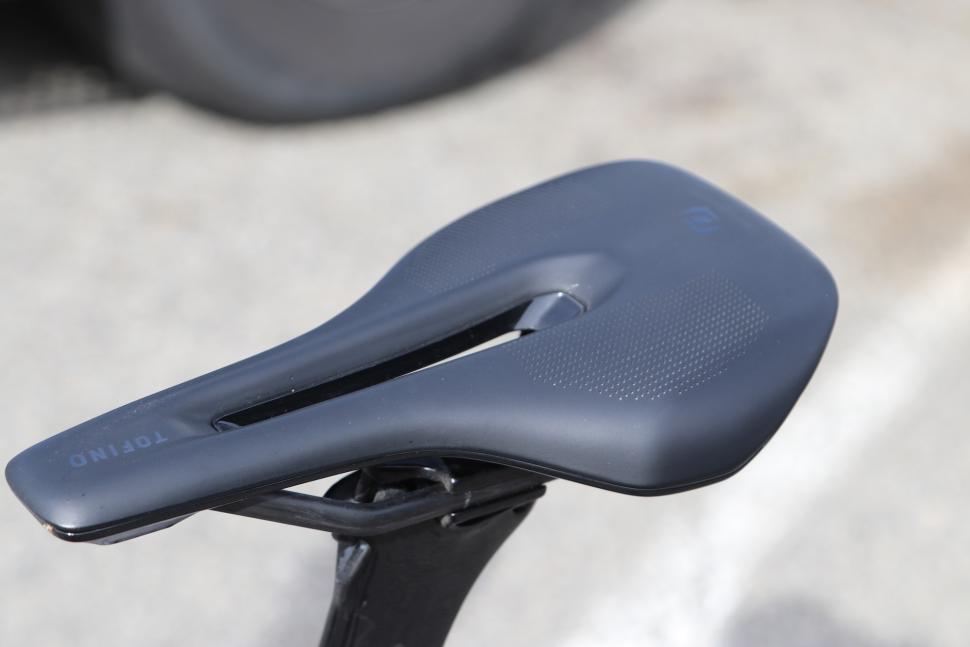 That said, we did spot this Syncros Tofino saddle with a cutout centre on one of Chris Froome’s bikes ahead of the Dauphine. It’s a bit of an odd one because Israel Premier Tech is sponsored by Selle Italia, and Froome was certainly on a saddle from the Italian brand come race time. It’s Team DSM that currently uses saddles from Syncros, a brand that is owned by Scott Sports, so this one has us scratching our heads. 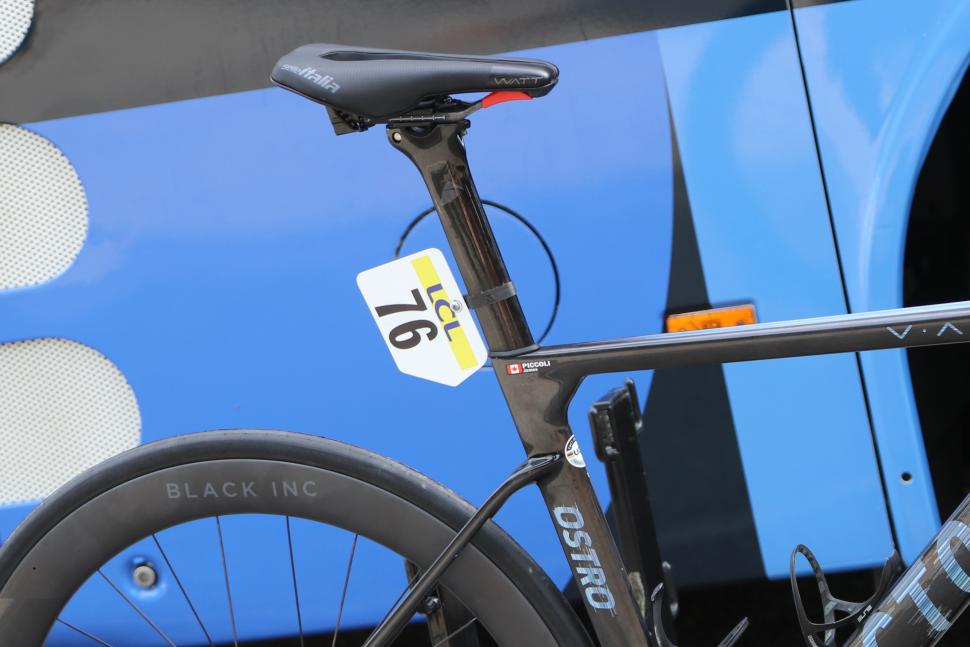 Saddles with cutaways in the centre, designed to relieve pressure on soft tissue and prevent numbness, are certainly hugely popular in the peloton. Froome’s teammate James Piccoli, who is not racing in the Tour de France, uses a Selle Italia Watt Supercarbonio Superflow on his road bike, even though it’s a saddle designed for time trial/triathlon with a wide nose and long rails that allow you to dial in an aero ride position. 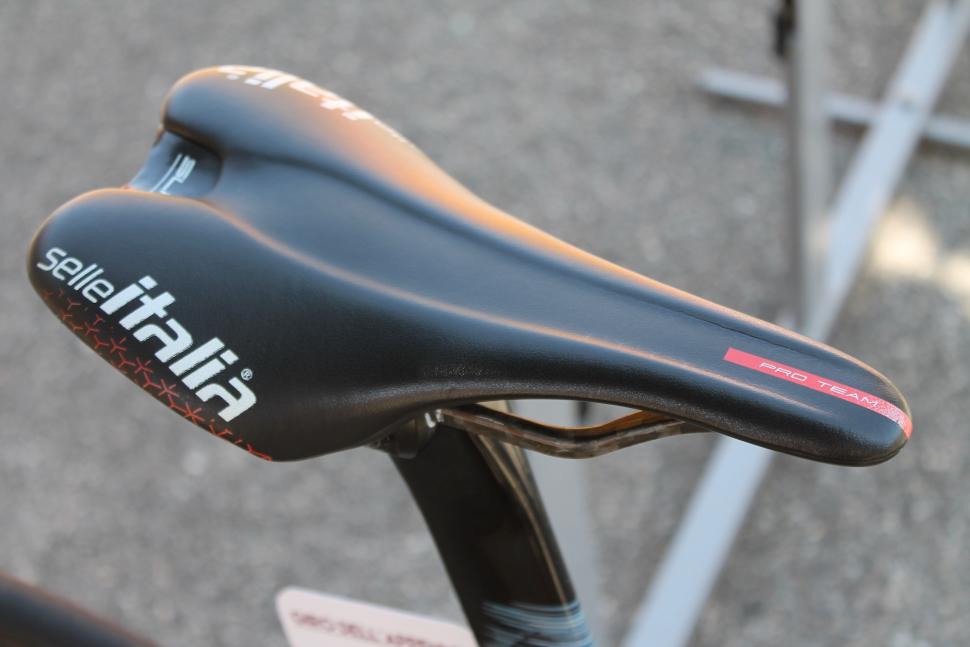 Guy Niv goes for the popular Selle Italia SLR in a Team Edition with a channel down the centre rather than a complete cutout. The aim is broadly similar: to reduce pressure on the most sensitive areas.

There are more 3D-printed saddles in the pro peloton now than ever before. Brands say that the lattice structure allows for the cushioning and support to be finely tuned in different areas more than is possible with traditional construction methods. 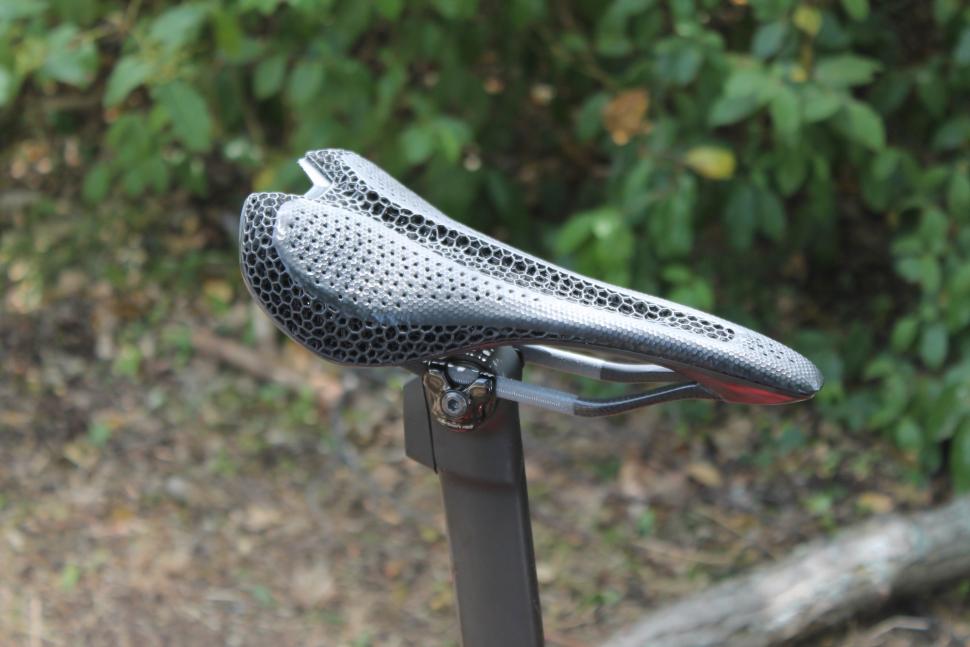 Edvald Boasson Hagen uses this Specialized S-Works Romin EVO with Mirror saddle, for example, as do many other riders on the Bora-Hansgrohe, Quick-Step Alpha Vinyl and TotalEnergies teams. Specialized claims there are 22,000 struts and 10,700 nodes (points where the struts join) per saddle, although we’re not about to count them to check. 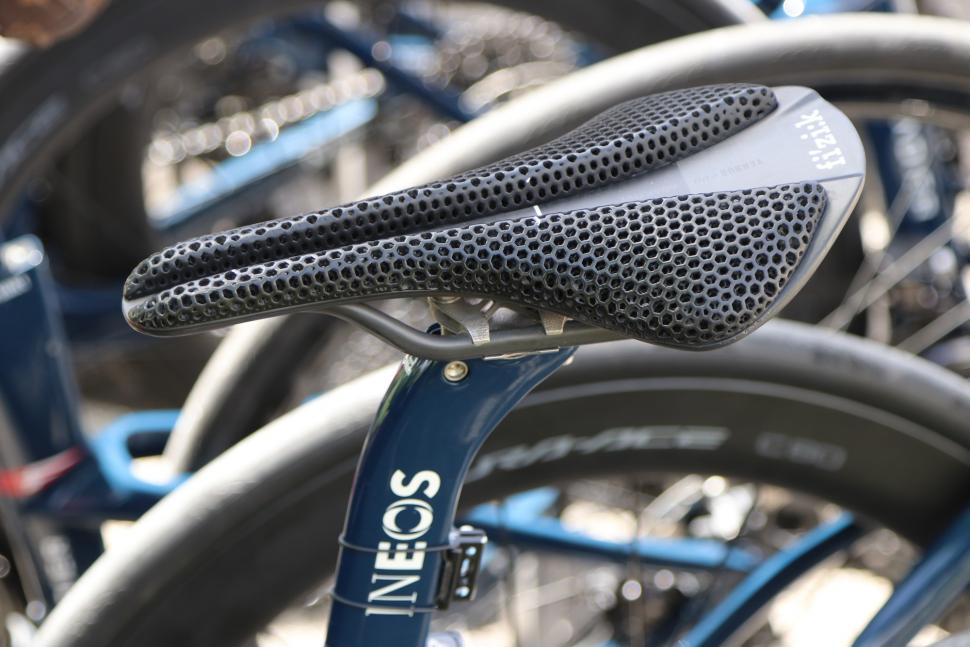 Team Ineos uses saddles from Fizik who offer similar 3D-printed technology. This is the Antares Versus Evo 00 Adaptive saddle with a carbon shell and rails.

That short white line drawn on the middle of the saddle is used as a reference by the mechanics when they’re setting up bikes for the individual riders. It helps them get the measurements exactly right… and we all know how keen Ineos is when it comes to detail.

You can expect more 3D-printed saddles at the top level in future with Selle Italia has just announced that a version of its SLR Boost will be made with a 3D-printed cover developed with Carbon. This is the US company that already works with Fizik and Specialized.

The new SLR Boost 3D features what Selle Italia calls a Superflow hole for pressure reduction in the perineal area, and will be available with carbon and TI316 rails. 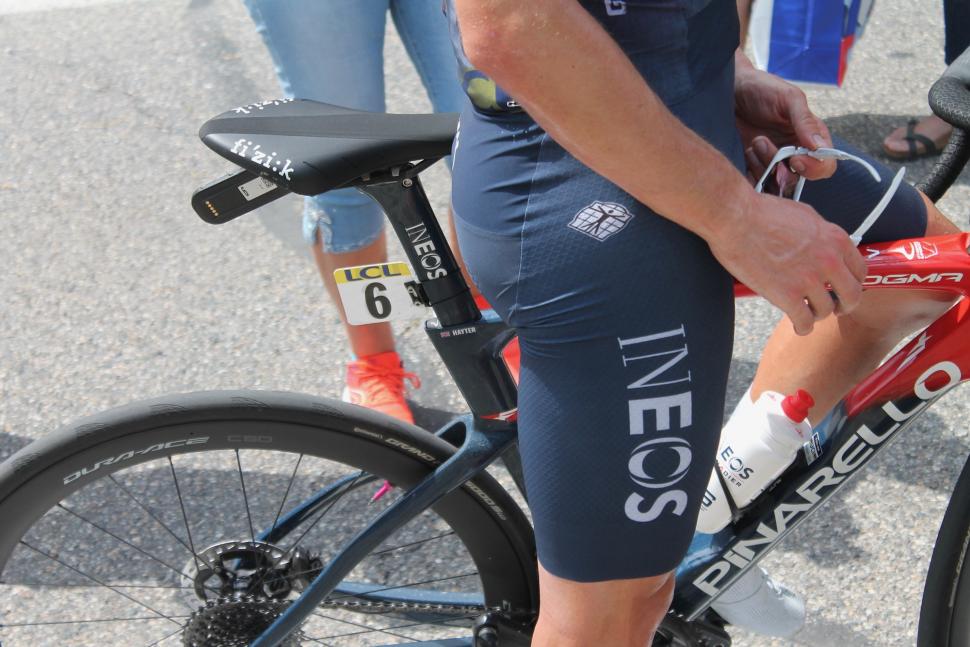 Far from all riders take up the option of a 3D-printed saddle, though. Ineos Grenadiers’ Ethan Hayer (not riding the Tour de France) goes for a Fizik Arione. This looks like the R1 model with carbon rails. You’ll rarely see a pro’s road bike saddle that doesn’t have carbon rails, although you’ll occasionally see steel rails on a time trial bike where weight is less of a consideration. 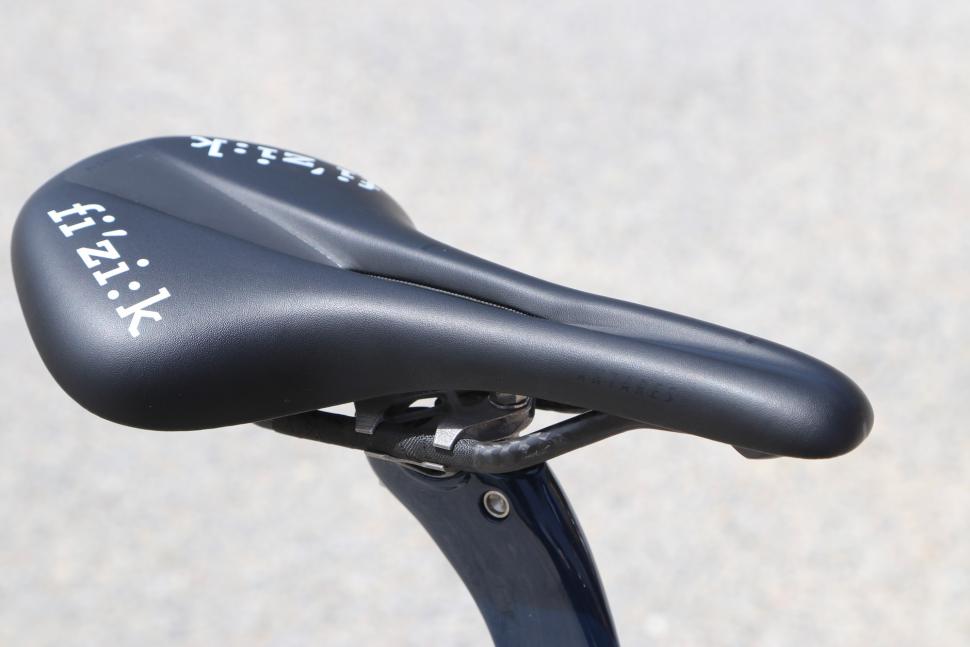 Tao Geoghegan Hart – he’s not at the Tour either – chooses a Fizik Antares R1 Open with a carbon-reinforced nylon shell and braided carbon rails. Fizik says that the Antares is designed for riders with a medium level of flexibility. 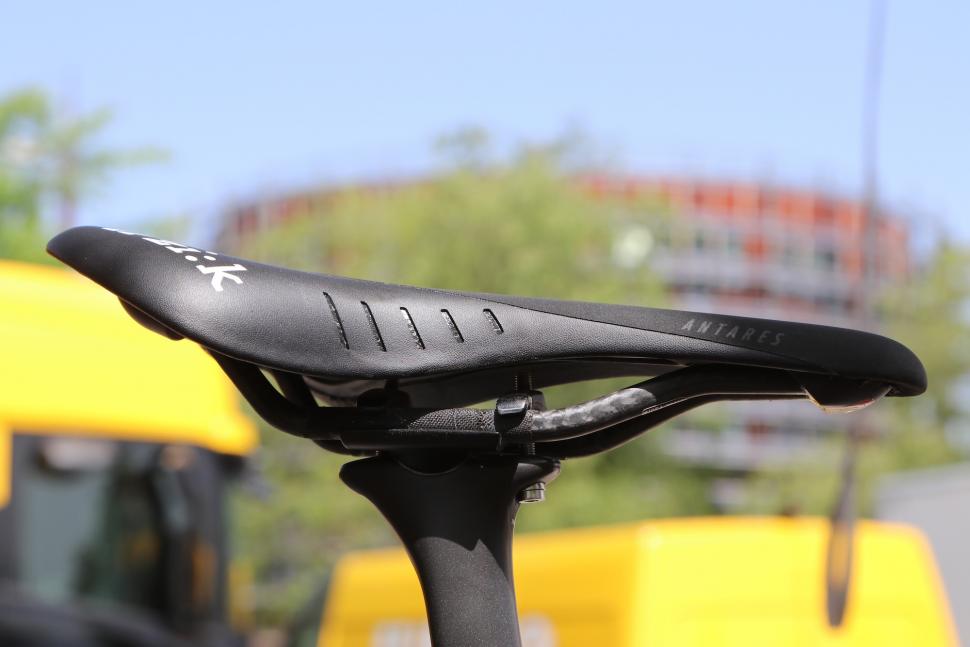 Over at Jumbo-Visma, Wout van Aert goes for a Fizik Antares too... 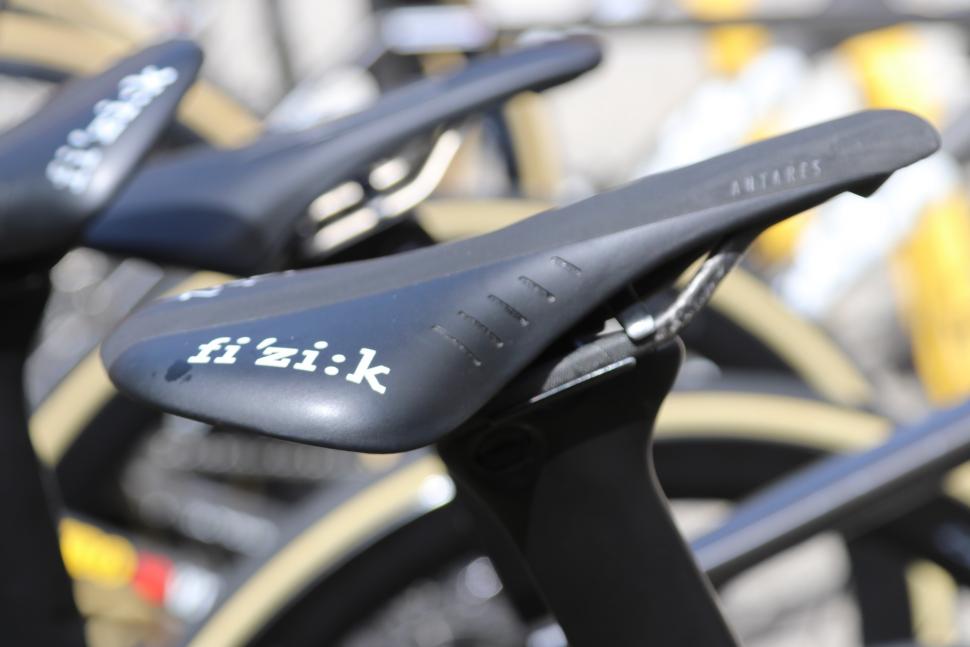 ...but without the cutout. 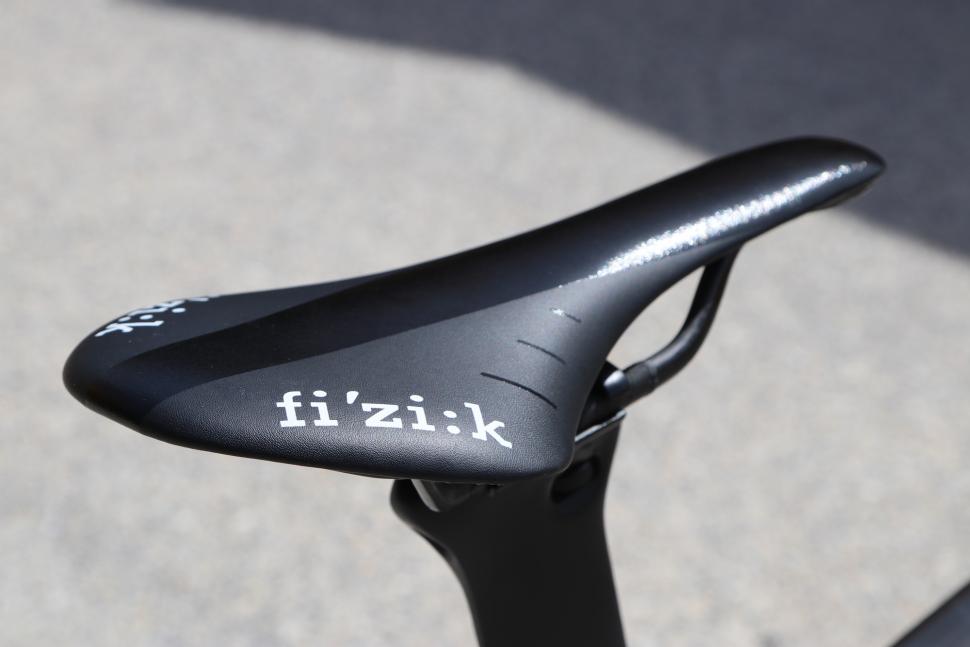 Jonas Vingegaard is another rider who favours the Antares shape, but he prefers the 00 version that comes with low-profile EVA padding to save weight. Fizik claims it hits the scales at just 140g.

Prologo supplies the saddles for a whopping seven of the 22 teams in the Tour de France so it must have a marketing budget to match the size of its range. 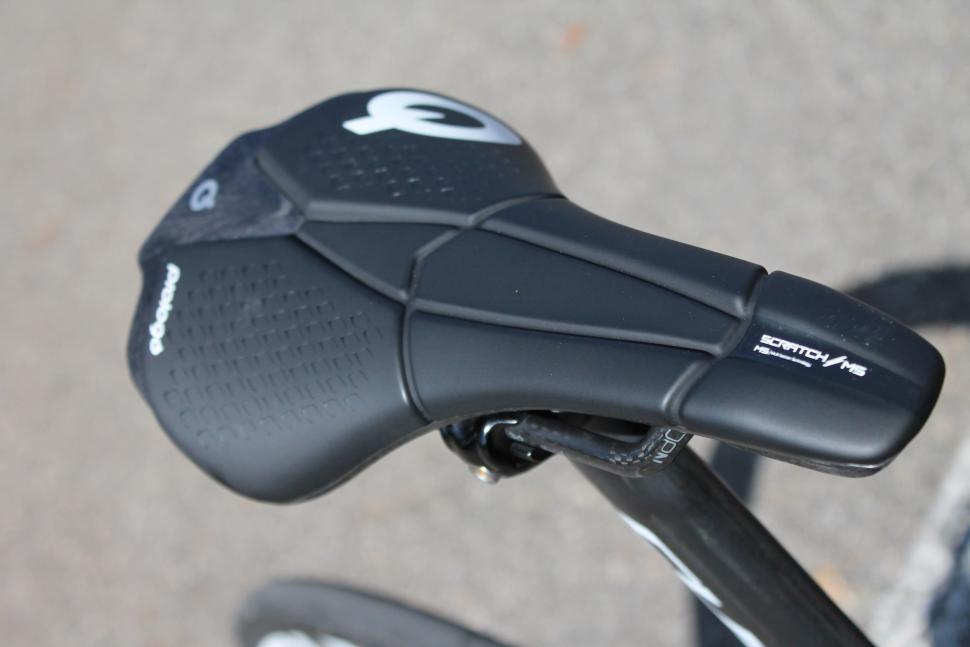 Louis Meintjes of Intermarché uses the Prologo Scratch M5, for example, with Nack carbon rails. This is the same saddle that Tadej Pogacar has ridden to victory in the Tour de France over the past couple of years.

Prologo’s Multi Sector System (MSS) divides the saddle up into five zones, each with separate foams designed to improve comfort and performance. 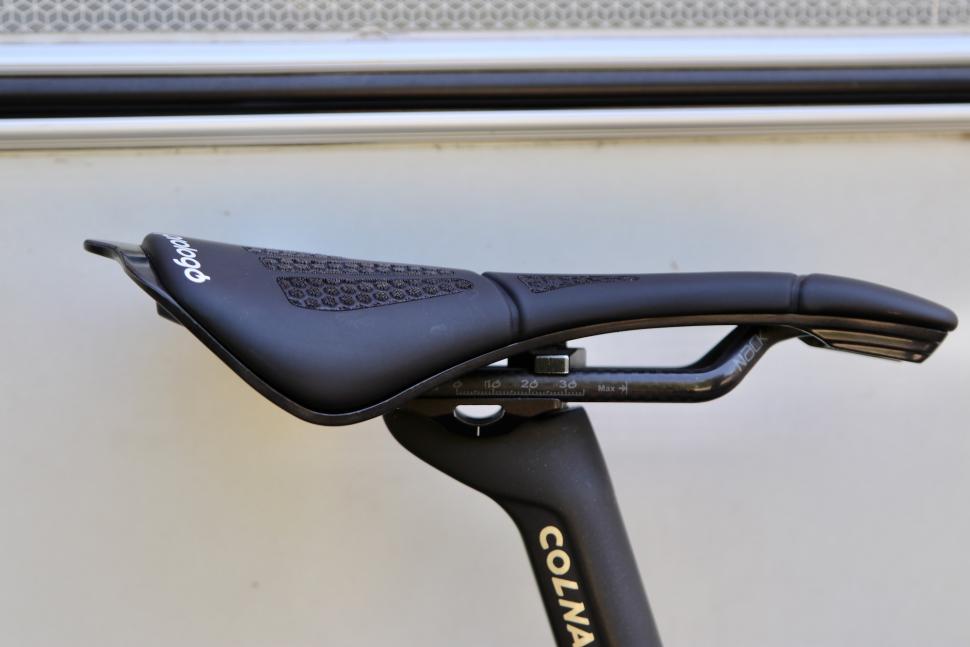 This is the CPC (Connect Power Control) version of the same saddle, CPC being made up of 3D polymer cones. The idea is to improve grip and absorb vibration. 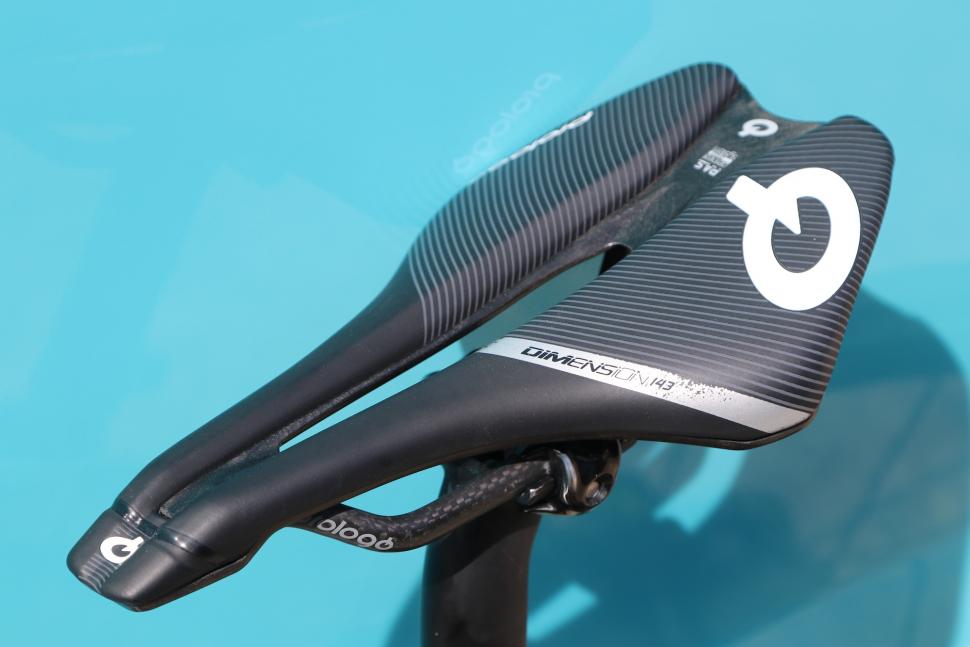 The Dimension 143 is a popular short saddle among the Prologo-supported teams. This one belongs to Simone Velasco of Astana. It is just 245mm long and weighs a claimed 155g with carbon rails.

Like other short saddles, it’s for those who know exactly where they want to sit and want to be kept there. 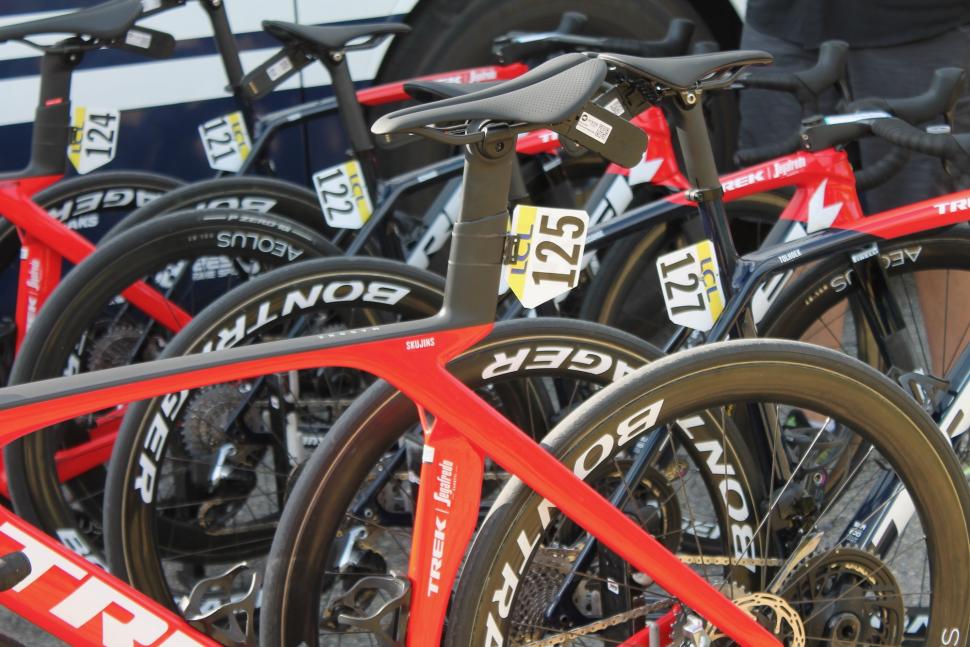 Trek-Segafredo riders use saddles from Trek’s Bontrager brand. This is Bontrager’s new Aeolus RSL saddle on Toms Skujins’ bike. Measuring 250mm, it’s nearly as short as the Prologo Dimension 143 (above). As well as minimising soft-tissue pressure, the cutout keeps the claimed weight down to just 142g in the narrow width. 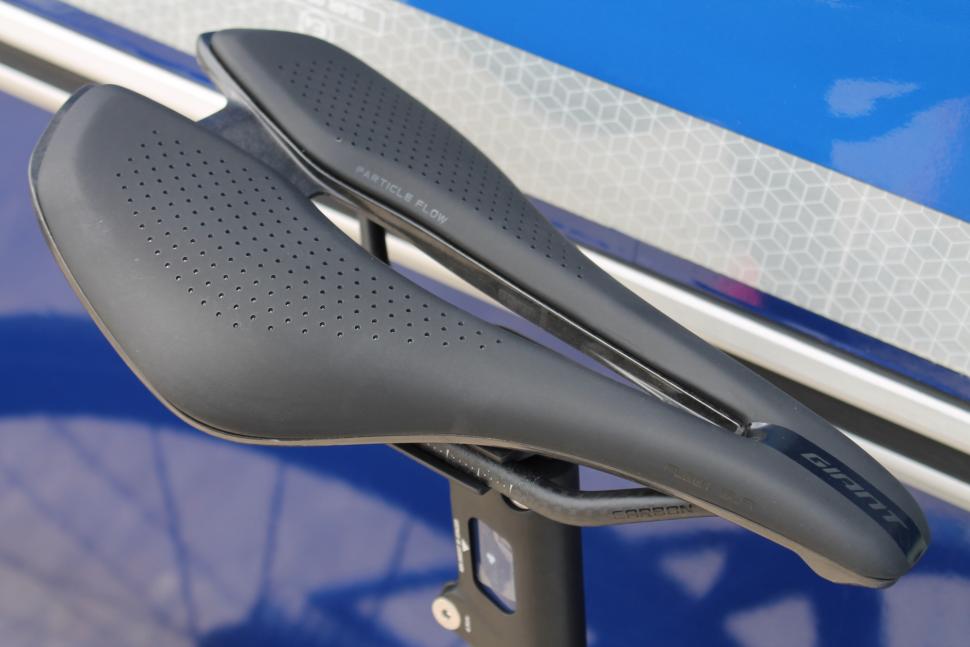 Like Trek with its Bontrager brand, Giant is another company that specs its own saddles on its bikes. Team BikeExchange’s Nick Schultz goes with a Giant Fleet SLR which is another shorty, measuring 248mm long.

It uses Giant’s Particle Flow padding meaning that free-flowing particles can move between two separate pockets. This moulds to your body to reduce pressure. It works well, according to our Liam.

Check out our review of the Giant Fleet SLR saddle 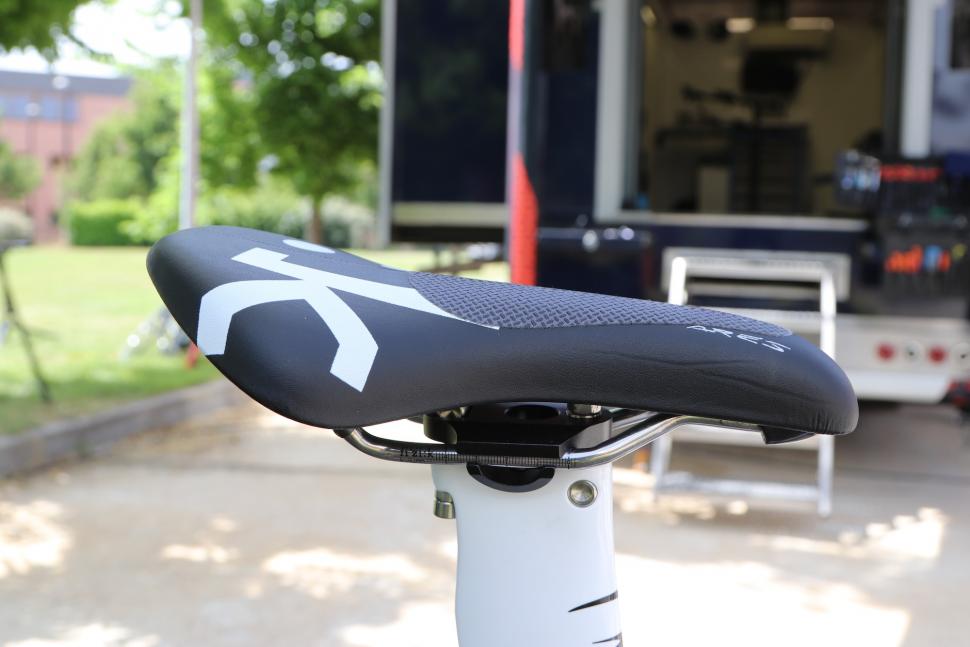 Time trial saddles are a whole other world – because the ride position means that the pelvis is tilted further forward than on a road bike so the padding needs to be concentrated on the nose – but Ineos Grenadiers still use a model that’s notable because it doesn’t exist. 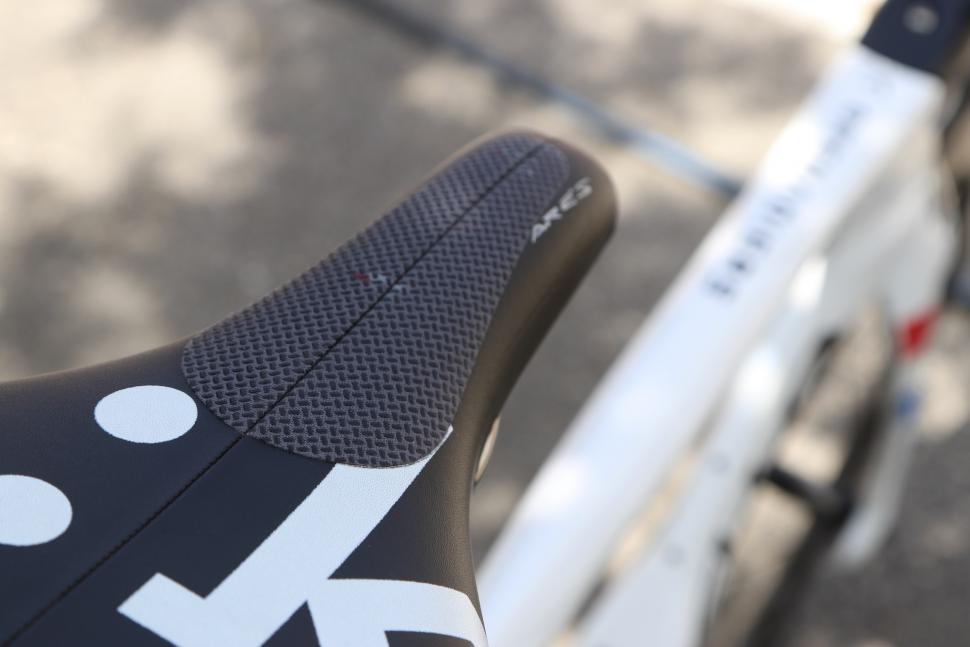 Fizik dropped the Ares from the lineup a while ago, but it looks like the team is happy with the performance. If it ain’t broke, don’t fix it.