The bike that Mark Cavendish would have ridden over the cobbles – if it wasn’t for his crash, like
by Mat Brett

This is the Specialized Roubaix that Mark Cavendish would have been riding over the cobbles in today’s stage of the Tour de France, but as a result of his crash at the end of Stage One, it will remain unused in one of the team’s trucks. 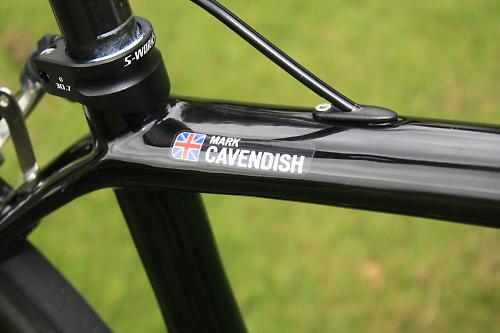 Some things in sport are destined never to get used: the loser’s ribbons at the FA Cup final, the Bristol Rovers trophy cabinet and, sadly, Cav’s Roubaix, for the time being at least. 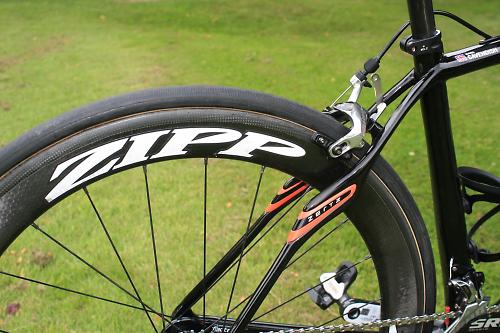 Specialized have been making the Roubaix in its various incarnations for many years now, and it has to be the best known of all the endurance bikes out there. 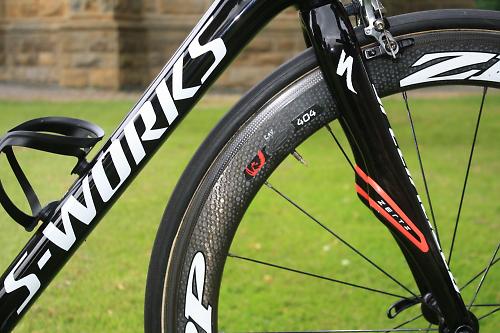 The idea of the Roubaix is that it offers a ride position that’s a little more relaxed than a typical race bike. You get a top tube that is a little shorter than normal and the head tube that is a little longer so your ride position is more upright. Cav’s Roubaix S-Works is still built to a racy geometry, though. That’s really not a tall head tube, even for the 49cm model that Cav favours, and he has the stem slammed right down on top of the headset without the addition of any spacers. 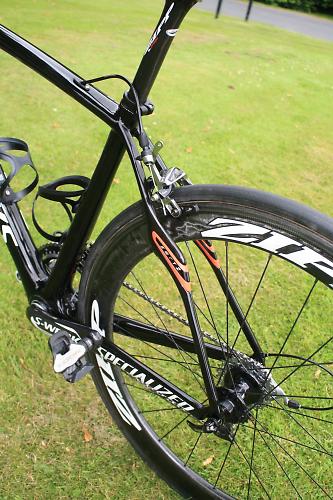 Specialized have used various Zertz designs over the years. These days they’re filling open-ended indentations in the seatstays and fork legs. We’ve heard (a little birdy told us, it’s not confirmed by Specialized) that it’s the fact that the elements are cutaway that makes the difference – the Zertz just fills the gaps rather than influencing the feel of the bike. In other words, remove the Zertz, leave the holes and the bike would behave exactly the same. That’s the word on the street! If it was our bike, we wouldn’t try it, though. 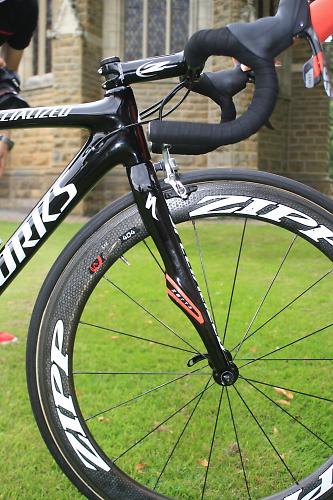 We took a look at Cav’s Venge, with its custom paint job, the other day (that was the kiss of death, wasn’t it?) Cav’s never seen as particularly likely to win over the cobbles, though, so the sponsors didn’t supply him with a Cavved up version of the Roubaix. Instead, he gets the standard Omega Pharma-Quick-Step finish. 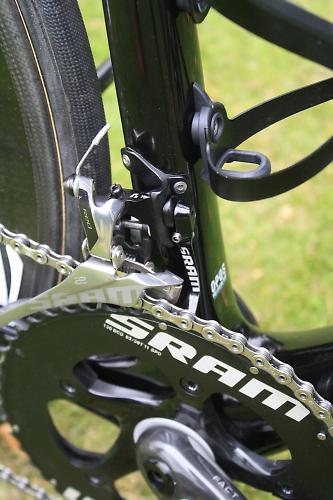 The bike is built up with a SRAM Red 22 groupset, the top-level group from the US brand. We’ve covered Red 22 loads in the past, one of the features being that you can run any front/rear combination you like, according to SRAM. In other words, you can have the bike in the big chainring and the largest sprocket, they say, although you’ll lose some efficiency in a combination like that. 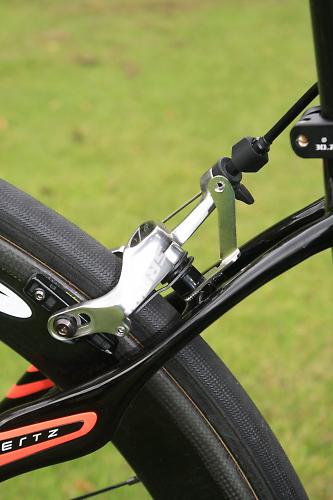 Rather than the hydraulic rim brakes that Cav first used in the Tour de France last year (technical issues with those brakes have been well documented over the past few months), this bike is equipped with cable-operated brakes. Omega Pharma-Quick-Step use Specialized’s own S-Works cranks and Look Keo Blade 2 pedals. While ear-wigging by the team truck our man Tony did hear Cav say that he’d prefer to switch to Dura-Ace pedals to prevent rocking from side to side (although not as politely as that), although we’ve no idea if that change was a realistic possibility. 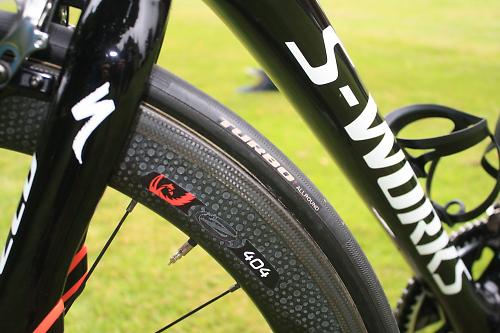 Zipp provide the wheels. These are 404s with the Firecrest rim profile rather than the new Firestrike profile. Whether Cav would have actually used these wheels for the cobbles or swapped to something else from the Zipp range, we’re not sure. Those are Specialized Turbo tubs (700 x 24) glued on there. Zipp also supply the handlebar, stem and seatpost. Cav usually uses Zipp’s chunky SL Sprint stem to provide the stiffness he’s looking for in a sprint, but comfort is more of an issue over the cobbles. This is a service Course SL 7075 alloy stem with titanium bolts. 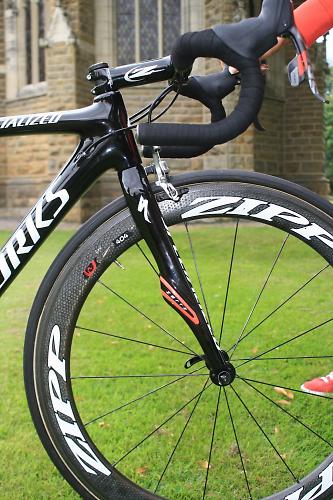 The handlebar is Zipp’s SL-88 with an 88mm reach and 130mm drop. It’s made from 7050 aluminium alloy and has a classic round drop rather than any ergonomic shaping.

The seatpost is carbon, Cav going for the SLSpeed with no layback (the clamp is inline with the centre of the post). The saddle on top is a Toupe from Specialized - the very latest we're led to believe.

In a paralell universe where that last minute barge for the line was successful this bike is now being hosed down after a job well done piloting the Manx Missile safely over the rain swept pavé. In this one though mud shall not spatter the Roubaix that didn't make it to Roubaix.