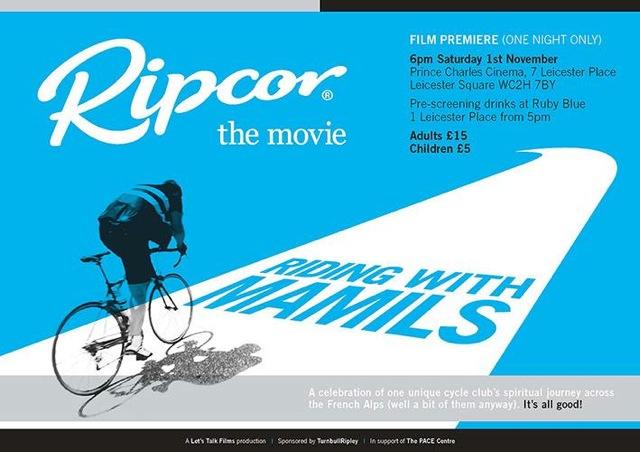 In the words of the trailer: “It’s a challenge, it’s adventure, it’s joy,” and for each of its stars it’s also about “continually being reminded that you’re a bit of a knob yourself.” This is Ripcor the Movie – Riding With Mamils, a documentary about a cycling club which has raised over £500,000 for charity.

Ripcor was formed in 2006 by Treve Ripley and Sean Cornell (Rip and Cor, respectively) as a means of having fun, getting fit and raising money for good causes. The team now has over 20 members and together they have cycled over 27,000 miles and raised £500,000 for the PACE Centre, a school in Aylesbury for children affected by cerebral palsy.

Now they are starring in their own documentary: Ripcor the Movie – Riding With Mamils.

Ripcor the Movie is described as being a celebration of the unique culture of the club, which is “exclusively for lovers of beer, cake and cycling who share a serious ability to laugh at each other and more importantly themselves.”

It was produced by Let’s Talk Films and follows Ripcor members on a training camp in the Alps earlier this summer. This was preparation for their latest charity ride, a five-day, 400-mile trip from Lisbon to the Douro Valley in Portugal last month through which they raised £60,000 for PACE.

The film gets what is being billed as its “world premiere” at the Prince Charles Cinema in Leicester Square, London, on Saturday 1 November. Tickets cost £15 and £5 for kids with all profits going to PACE. They are available from tripley@turnbullripley.co.uk. Or, if you want, you can donate directly to the PACE Centre here.